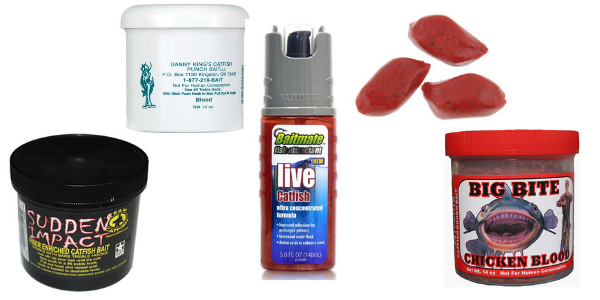 When it comes to catfish lures, the most successful ones have a strong scent. Catfish rely on their senses of smell and taste, and they have olfactory bulbs covering their entire bodies. The trick to getting a catfish on your line is choosing the right type of bait or lure.

For live baits, try shad or crawfish. Chicken livers are also a popular choice of bait for catfish, but what about artificial baits and lures? We’ve rounded up the top-rated catfish lures so you can make the most out of your next fishing trip.

These are the Best Baits and Lures for Catfish: 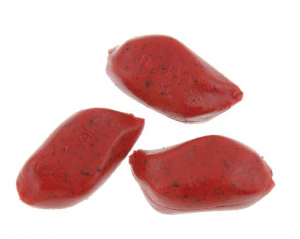 Berkley is well-known for making baits and lures with strong scents and flavors. Berkley makes some great worms, which are an ideal choice for fish like trout. For catfish, Berkley doesn’t disappoint. With Berkley Gulp! Soft Fishing Chunks Catfish Bait, you get the signature Berkley scent along with the look of an attractive chunk of meat that a catfish won’t be able to resist. In fact, the company’s products have 400 times more scent dispersion than other competing brands. This means you’ll have the ability to lure in catfish within a wider radius. Another benefit of this lure is that the scent is optimized to attract different types of catfish.

These chunks of bait come in two varieties: blood and liver. If you typically fish for catfish using chicken liver, give the liver model a try. Berkley’s catfish bait is stronger and more durable than actual chicken liver. The soft fishing chunks are easy to get on your hook, and they stay on the hook fairly well. In each order of this bait, you’ll receive 12 chunks for under $6. If the bait stays on the hook, you may even be able to reuse one of the soft fishing chunks, so this is a great deal. 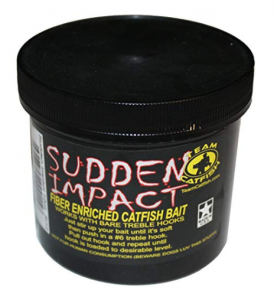 With a name like Team Catfish, you shouldn’t be surprised that the company’s products can result in a nice catfish catch. This is another lure and bait that has a strong, stinky scent to attract catfish. The way Sudden Impact works differs from Berkley’s baits. Instead of just sticking the bait onto your hook, you’ll have to do just a little bit more work. Before placing Sudden Impact onto your hook, you need to stir the bait until it softens. This bait has a fiber-like consistency, which keeps it on the hook. The carton recommends using a #6 treble hook, but you might need to experiment with other hooks to keep it firmly in place.

Once Team Catfish Sudden Impact is in the water, the bait begins to break down, so the scent will spread farther away in the water. You can use this bait in all types of water, from large lakes and rivers to smaller streams and creeks. As long as you’re fishing in a body of water with catfish, you’ll have a high chance of getting a bite on the end of your line. Team Catfish Sudden Impact comes in 12 ounce jars. 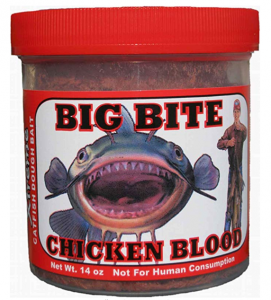 This Big Bite Chicken Blood Catfish Bait by Magic is a dough bait. With this bait, you’ll want to also purchase a strong bait holder to keep it firmly situated. You won’t want your bait floating away in the water!

Dough baits also have a strong, fishy scent, and Magic Big Bite Chicken Blood Catfish Bait is no different. This bait is made from cheese, fish, and other materials that attract catfish. It’s sure to leave a stink that will have catfish coming to you. As you may have guessed from the name, Magic’s catfish bait comes in a chicken blood flavor, so swap your chicken livers for some of this dough bait.

For the most successful use with this bait, save it for the summer and other warmer months. Magic’s Big Bite bait does best when the water is warm. The oils from the aged cheese will travel well in the warm water, which is just one of the reasons why catfish will take the bait. On Amazon, you can buy a 14 ounce jar of Magic’s catfish bait for just under $12. Compared to Team Catfish Sudden Impact, you’ll get a slightly bigger jar of bait for less. If you’re looking for a reasonably priced bait, this might just be it. 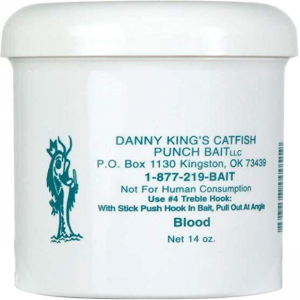 Whether you’re handling live bait, chicken livers, Sudden Impact, or catfish bait from Magic, it’s also certain that your hands will quickly get messy. With Danny King Punch Catfish Bait, you won’t have to worry about the stench of catfish bait on your hands all day. Punch baits are doughy and sticky, and Danny King’s bait is extra sticky. As long as you have the right hook, this punch bait will stay there until a catfish bites.

With Danny King’s formula for bait, you won’t need sponges, cloth, or coils to make sure that the bait sticks to the hook. With a #4 or #6 treble hook, you should be perfectly fine to use this bait. Just push the hook into the jar of bait, then pull the hook out at an angle. Like other catfish baits, the scent will disperse and spread out in the water.

The Danny King Punch Catfish Bait is long-lasting, so if you don’t fish for catfish often, consider making this purchase. Even after a long stretch of time, the bait will be fresh and good to go, so you can pack for your fishing trip without worrying that it’s no longer usable. This color of the bait is blood, so it should give catfish the sense of fresh meat along with the scent. Buy a 14 ounce jar of this punch bait from Amazon.

If you’re not using live bait, the next best thing is something with a strong stench. Sometimes, lures with a rattling sound also attract catfish. If you’re using a lure without a scent or need a little extra something, then use Baitmate Live Scent Fish Attractant! You can use Baitmate in freshwater and saltwater, and aside from catfish, the Live Scent Fish Attractant is also made for gamefish and walleye.

With Baitmate’s products, all you need to do is dip your lure into the attractant or spray it directly on the lure. This can work well with soft plastic lures. The ultra concentrated formula has plenty of benefits. The Live Scent Fish Attractant stays on lures for a while and is fairly potent in the water. It also increases scale fleck, which results in more visual stimulation for the fish you’re trying to catch. Finally, the amino acids in the attractant create a scent that attracts catfish and oils in the mixture cover up unnecessary or unwanted scents. These come in 5 ounce bottles on Amazon.

Blue catfish come in a large range of weights, but these are the heaviest of the three catfish. In many cases, blue catfish weigh anywhere from 20 to 40 pounds, but they can reach weights of around 120 pounds. If you’re trying to catch blue catfish, you’ll have more luck in rivers. Large rivers like the Mississippi or Ohio River are great places to look for some catfish. If there’s a strong current, catfish will seek out shelter, so find a location with some cover to fish. Blue catfish aren’t spotted and have a forked tail.

Flathead catfish are likely the most difficult of these three to catch because they’re found under shelter and vegetation. They feed during the night, which is another reason flatheads are a bit more trickier to nab. Flathead catfish prefer murky or cloudy water without a strong current. When it comes to catching flatheads, live bait might be a better option, but a good catfish lure can also be handy.

Most of our list is not the typical hard plastic lure that most fish bite. Catfish are guided by scent, so they are easier to catch with either live or artificial bait. Artificial bait as opposed to live bait can work just as well, especially since the artificially produced scents are usually stronger than natural scents.

Catfish are also attracted to sound, so a rattling lure can work well, especially if sprayed with an attractant like the Baitmate Live Scent Fish attractant. Try the Rapala Rattlin Lure sprayed with fish attracting scent if you’re dead set on using hard lures – if not, simply invest in live bait or the artificial baits we’ve recommended.

How to Catch Catfish

Understanding that catching different types of catfish will require different tools and techniques is the first step for a successful fishing trip. Finding the right location is also a critical step. Pick a river with a mid to strong current if you’re looking for blue catfish but stay away from rushing waters if you’re fishing for flatheads.

Typically, catfish are known for being bottom-dwellers, but you can find them closer to the surface of the water as well. If you’re not catching anything near the bottom on a lake, try another level of the water column.

The time of day is important, but not all catfish are nocturnal and feed at night. Some types of catfish are opportunistic feeders, so your best bet is to find them as their prey is also swimming around.

Be sure to get the right equipment. We’ve talked about what makes the perfect bait, but you’ll need a strong rod, especially for heavier catfish. For larger and heavier fish like the blue catfish, make sure all of your equipment, from rods, reels and lines, can handle the catch.

Ultimately, when purchasing a catfish lure, find something with a strong stench. It might not be pleasant for you to handle and get the bait on your hook, but this smell will attract catfish. For your other bait, tackle, and gear needs, Fishmasters has the information on the top-rated products.