Home > Freshwater Fishing > Can You Eat Carp and How Does It Taste?

Can You Eat Carp and How Does It Taste?

Carp is a common freshwater fish that swims in lakes and rivers in every state except Alaska. Since they can be caught fairly easily, even if they do put up a big fight, you might be wondering, can you eat carp? These large fish can grow to weigh almost 100 pounds, so if you were to eat one, you’d certainly have a lot of meat on your hands. However, you have to really like fishy fish to dine on carp.

Since carp are so common, they are a dietary staple in many parts of the world. Strangely, though, fishermen in the U.S. often consider carp to have minimal sport value and even less food value. This is in contrast to how most other areas of the world feel about carp as food and sport. In Asia, carp is eaten extensively, and in Europe, it is considered a top sport fish. Perceptions in the U.S., however, are beginning to change.

If you want to eat carp, you should only fish it from non-polluted waters because this fish relies on vegetation for food, so if the local land is polluted, the carp’s meat will be contaminated as well. The surrounding vegetation quality will also impact the flavor and quality of the carp meat, so the more pristine the waters from which you pull your carp, the milder the flesh will be.

The actual flavor of carp is highly dependent on its habitat. In cases where they have been pulled from fresh, clean water and immediately put on ice, you’ll find that their flavor is mild, flaky, and moist. However, if the blood is allowed to flow into the rib meat after it is pulled out of the water, which occurs if carp are not put on ice immediately, you’ll get a significantly fishier flavor. Moreover, polluted water can equal bad-tasting carp.

Jewish cuisine has a dish that calls for carp as the main ingredient.  They call it Gefilte fish.  Gefilte fish is a dish made from a poached mixture of ground deboned fish, such as carp, whitefish, or pike. It is traditionally served as an appetizer by Ashkenazi Jewish households.

Carp is best served deep-fried, grilled, or pan-fried, but you can certainly experiment with it and try a variety of other preparations that are also tasty. Carp is the most heavily eaten fish in the world, which wouldn’t be the case if it didn’t taste good and didn’t have many applications. You’ll have quite a bit of meat from even a smaller carp, so try it in several recipes to determine your favorite. 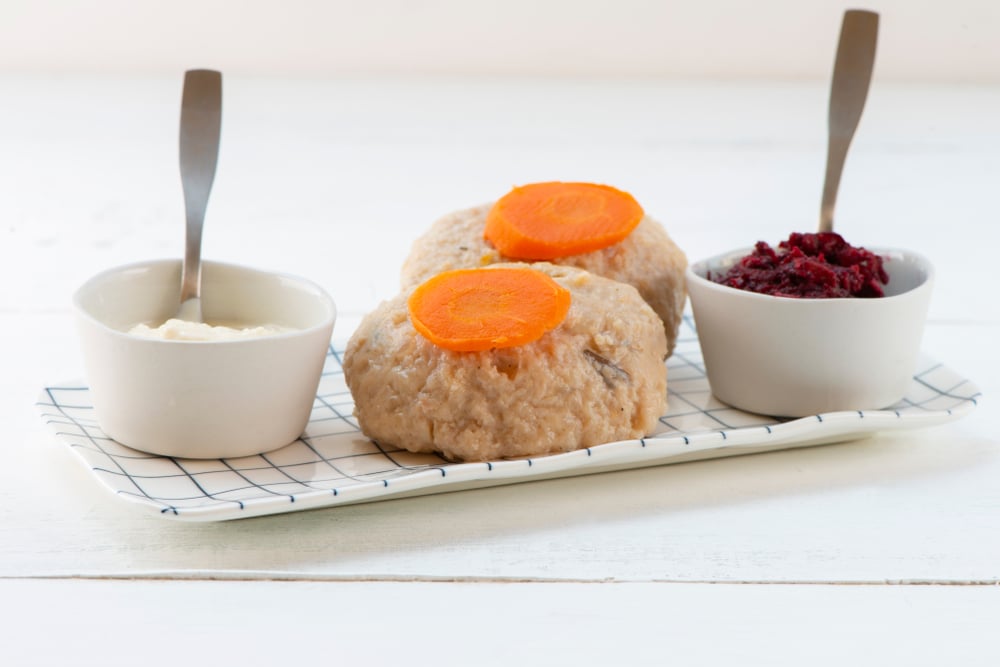 Freshwater fish is typically not served raw, specifically because it can be full of parasites and toxins. While some of these can be cooked out, they just aren’t safe to eat raw. Of course, campers who eat their freshwater fish as ceviche right after they catch it may tell you differently, but most experts do not recommend eating carp raw. Most states require sushi to be frozen before it is served, but freezing it does not kill all parasites, either.

Carp is an extremely popular fish for food all over the world, except for the United States. However, since it is so prevalent in lakes and rivers all across the country, it is showing up on menus and in recipe books more often. Even though it isn’t recommended that you eat it raw, there are still plenty of other ways to prepare carp to enjoy a delicious and filling meal.

These fish are not the most attractive-looking, with their slimy brown color and catfish-like whiskers. They prefer slow-moving or still waters and have been denigrated as “trash fish” for their tendency to prefer muddy or sandy lake and river beds. Their average size is about two feet in length and approximately 30 pounds in weight. However, you can find carp both larger and smaller than these in nearly every lake you fish, as they are hardy creatures and adapt easily.