Home > Freshwater Fishing > Walleye vs Sauger: What You Need To Know

Walleye vs Sauger: What You Need To Know

Sauger and Walleye are two fish of the Percidae family that often get mentioned beside one another. There are many similarities between them, so we can see why. They’re freshwater fish that are abundant in the Great Lakes, so many anglers love them for both their taste and their fighting spirit. 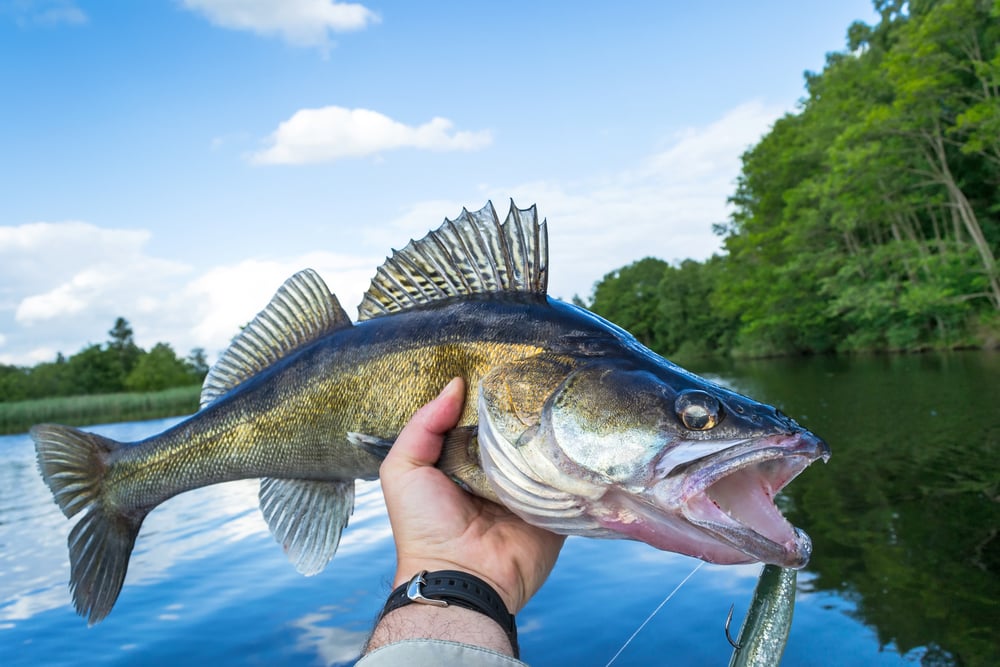 While they’re similar, it also helps to know what differentiates them so you know what you’re dealing with. That’s what you’re going to learn today with our rundown of Sauger and Walleye, comparing and contrasting how they look, where you can find them, and other meaningful similarities and differences.

The main similarity between Saugers and Walleye is plain to see if you just look at them. They are structurally very similar. This is because while they both belong to the Percidae family, they also share the Sander genus.

This is a grouping of predatory ray-finned fish that have long bodies and a pair of dorsal fins, and the other fin arrangements of the Sauger and the Walleye are similar.

They both share a signature reflective retina too. The Walleye is given its name because it has pearlescent eyes that are capable of seeing in low-light conditions while looking like an opaque wall.

It looks like it has poor eyesight, or it’s blind, but in reality, they have a sharp sight that works well in darkness but not so well in sunlight. Saugers also have these eyes but aren’t named after them.

So, what are the differences between Saugers and Walleyes? There are four main things you should take a look at:

While the individual presentation of these differences changes, learning to identify them is the key to telling a Sauger apart from a Walleye and vice versa.

The first and most noticeable of the differences is that Saugers are consistently smaller than Walleye. The size difference isn’t slight either, with Walleye being double the size of Sauger, who typically stop growing after 15 inches.

Secondly, their body colors are different. While both Sauger and Walleye have rich, dark, and metallic scales, Saugers have black spots while Walleye are solid gold all over. Saugers also have a brassier color than Walleye, too.

Look at the tail too, because Saugers have a consistent black and brass pattern while Walleye have white on the lower half of their fin.

A big part of differentiating Sauger and Walleye is where you’ve found them. While they can and do exist in the same waters, as we’ve discussed below, the main populations reside in separate waters.

You may have heard Walleye called Gravel Lizards, which is because they love water that has a lot of gravel and tiny rockery at its bottom. Walleyes are typically found in still lakes and reservoirs that are large and deep, with plenty of places to hide in the shade and put their dark-adjusted eyes to use.

As for Saugers, they prefer more active water sources like rivers and streams. They can still be found in lakes but they like water with fast currents. Pools with muddy or sandy bottoms are more attractive to Saugers too, as opposed to gravel.

If you’re fishing in the right locations, you shouldn’t confuse the fish often. There will usually be a clear majority of Walleye or Sauger in your location, making it much easier to identify.

It only gets even easier to compare and identify once you’ve caught one since you can compare them yourself. Keep them both because they’re both equally delicious.

With how similar Sauger and Walleye are to one another, it’s no surprise that they’re highly genetically compatible. This means that they can breed with one another to create hybrids when they do inhabit the same waters.

Hybrids are fish that share the qualities of both species, which only complicates things for people like us who are trying to tell them apart!

The hybrid is called the Saugeye and fortunately, they’re actually very easy to identify. Two very distinct and unique features are present on the Saugeye that let you know they’re a hybridization. First, the Saugeye will have the Sauger’s black-splotched body.

Second, they’ll have that whiteness on their lower tail. If both are present on one fish, you’re dealing with a Saugeye.

By knowing whether you’re dealing with a Sauger, a Walleye, or a Saugeye, you can be confident in your catch and keep within any laws or limitations placed on the fishing spot.