Known as The Little Tarpon of the Commonwealth in Virginia, fallfish is not one of the native fish in America anglers usually rave about. Mostly they are used as bait or completely ignored. Can you eat fallfish? You can, but most people who have tried say it tastes awful. 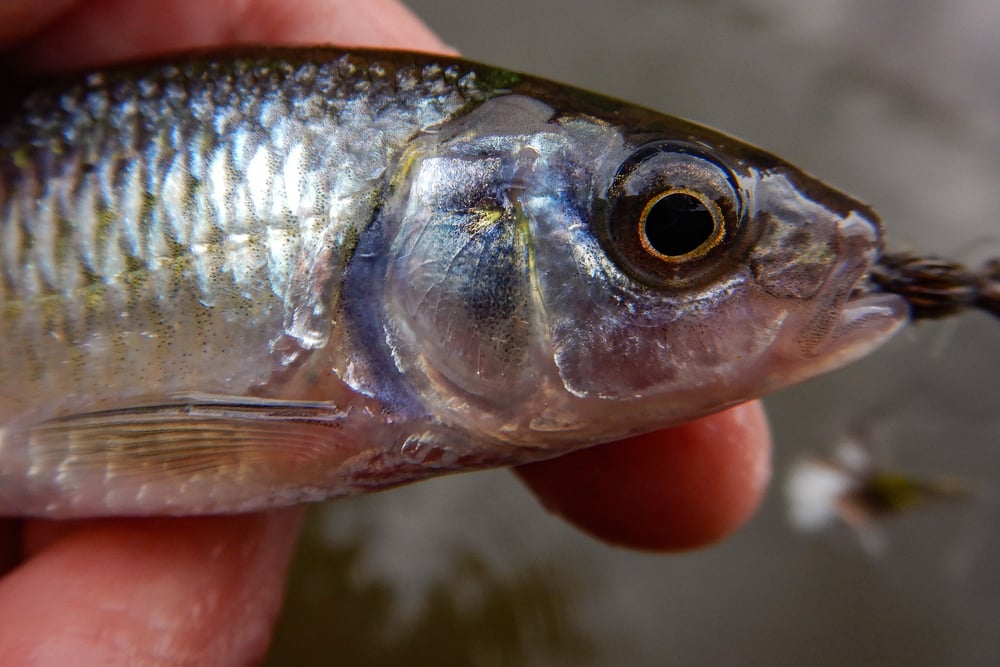 You can eat them. Just make sure that the water where the fish come from is unpolluted. Mercury, polychlorinated biphenyls (PCBs), dioxins, and pesticide residues that are found in contaminated fish can seriously affect your health. If you are going to catch them yourself, read the consumption reports for where you’re fishing and watch out for warning signs at fishing spots.

Fallfish, or Semotilus corporalis, also known as American chub, chivin, stone roller, whitefish, corporal, and dace, have no scales on their round heads and a golden brown and olive color. They have large mouths, a snout that extends past the upper lip, and big eyes. The tails of fallfish are forked and bend downward.

Fallfish, one of the largest minnows, can grow up to 17 inches in length and weigh between 1-4 pounds. The average fallfish live for three to eight years, but a ten-year lifespan has been recorded.

Fallfish are native to North America and are found in rivers and streams, lakes and ponds from eastern Canada to Virginia, east of the Appalachian Mountains, and in abundance in New Hampshire. They mostly live and forage in shallow depths and warmer waters. Fallfish are very easy to catch with worms or small lures and flies.

Not many people know what they taste like and call it trash fish. Those who have tried it say it tastes like wet cardboard. Others say fallfish has a delicate flavor but complain that it has too many tiny bones. Then some believe fallfish can only be used for making fish stock.

We would also love to know. There are very few fallfish recipes out there, and it seems that most cooks who did try it prefer to make fish cakes out of them. Probably the best way to use this fish, if you really want to eat it, is to make stock out of it.

We haven’t found anyone who has tried fallfish raw, but there must be someone out there somewhere. There shouldn’t be any reason why you can’t eat it raw. But would you want to?

If We Do Not Eat It, What Does?

Fallfish are not a favorite of humans, but they are the prey of birds and larger fish. They fall prey to northern pike and fish-eating birds like ospreys and American herring gulls.

Like any other freshwater fish, you can freeze fallfish. Stick it in an airtight container, write the date clearly and freeze it for up to six months. The longer you freeze fish, the more enhanced the flavor will become. We strongly suggest that you eat frozen fish within three months before it loses its freshness.

Freshwater fish is a healthy source of omega-3 fatty acids, rich in B vitamins (thiamin, riboflavin, and niacin), vitamin D, phosphorus, and iron. Fallfish are no different. Just make sure they came from uncontaminated water.

We kind of feel sorry for fallfish. They are not very popular, and it seems fallfish are the ugly stepchild of the fish world and mostly ignored. Few anglers catch them specifically for the dinner table and prefer to use them as bait to attract more desirable fish, such as pike and bass.