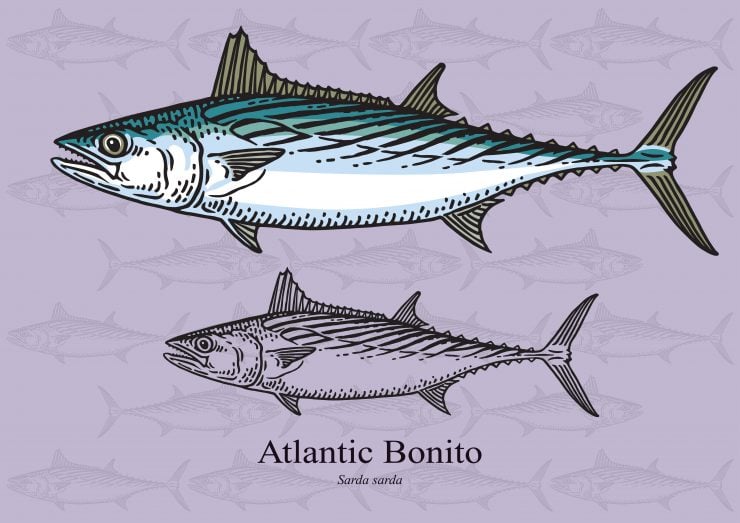 The common names for the Atlantic Bonito are the Northern Bonito, Common Bonito, and Oceanic Bonito. Its scientific name is Sarda sarda.

The Atlantic Bonito is a smaller and streamlined member of the tuna family. They often form large schools on the Atlantic coast where they are common. Their schools often mix with bluefish and mackerel.

You can also find the Atlantic Bonito in the Mediterranean and Black Seas. At times, some of their species will go to even colder waters. So they will extend to the North and South Atlantic Ocean.

While fisheries catch them, the Atlantic bonito is not a mainly commercial fish species in the US. It is legal to go recreational fishing for them.

These fish are almost more mackerel than tuna with their characteristics.  The size of an Atlantic Bonito is thinner than most other tunas. However, they do have a typical tuna shaped body. Like other tunas, this is a streamlined fish with a narrow tail base and a forked tail.

They commonly measure two feet in length and weigh between four and five pounds. On occasion, they can reach 12-15 pounds in weight, though they rarely weigh over 20.

Their bodies are mostly silver, but they also have blue-green scales. One other defining feature is the black stripes along with their bodies.

These are the only tunas with longitudinal stripes on its back. The back and upper sides are steel blue.

The world record for the largest Atlantic Bonito is an 18-pound four-ounce catch from the Faial Island, Azores.

The Atlantic Bonito remains mostly a mystery as their migration patterns are not well known. Their reproduction method is primarily unknown.

We know that this fish’s spawning period is in the early summer from May to July. However, spawning for them seems to change in different regions. Off of Algeria, Atlantic bonito spawn periods extend from March to May.

As soon as they are born, Atlantic Bonito are fierce and fast predators. As adults, they eat all kinds of fish.

Scientists have conducted preliminary studies on the Atlantic bonito along the northwestern coasts of Africa. The studies indicated that this fish usually reaches sexual maturity by two years old and can live up to nine years.

Schools of Atlantic bonito will undergo feeding migrations in the Mediterranean and Atlantic. During these migrations, they feed on mackerel, anchovies, sand eels, squid, and other schooling fish species.

This is a pelagic species of fish. That means this fish usually lives in the middle of the sea in open areas of water. You won’t find them on the ocean floor or near the surfaces.

They may find their way into shallower waters and sometimes swim close to shores or even enter estuaries. Previous sightings of them have been in Miramichi and the Gulf of St. Lawrence.

In most cases, the Atlantic bonito’s diet will depend on the locality of the fish species in the region. They will prey on smaller fish in which they can swallow whole.

This fish is also what is called a ram ventilator. This term means this fish cannot bite and must swallow its prey whole. For this reason, the diet of the Sarda Sarda consists of smaller fish that they can easily eat.

The fish it usually eats are mackerel, menhaden, sand lance, herrings, anchovies, and some shrimp and squid.

Atlantic bonito typically feed at water depths extending to 200 m. They like to eat where the water temperature is from 12-27 degrees celsius and at salinities between 14 and 39 ppt.

Threats to the Atlantic Bonito are fish who are larger. These predators are larger tuna fish, marline, and wahoo.

Atlantic Bonito like to jump to the surface of the ocean as they chase bait. Sometimes, you will find them below birds who are trying to catch prey–so keep an eye out for flocks if you are fishing for Atlantic Bonito.

You’ll want to troll near the surface so you can jib or surface cast when trying to lure one.

When you locate a school of them, motor your boat nearby but do not go through the school of fish. The sound will disperse the fish and make it more difficult for you to get a catch.

Stop your boat nearby the school and then cast your line.

You will find this fish in several parts of the world. They distribute in the Atlantic Ocean’s coastal waters, the Mediterranean Sea, and the Black Sea.

They are relatively rare in the Gulf of Mexico, but some scattered reports of sightings of the fish from the northern and northeastern Gulf in open coastal waters.

This isn’t the best fish for cooking. Some say that the Atlantic bonito is best for baits. The fish’s size is likely the reason people don’t eat it as much as other tuna.

There are some ways you can enjoy this fish as a meal, however.