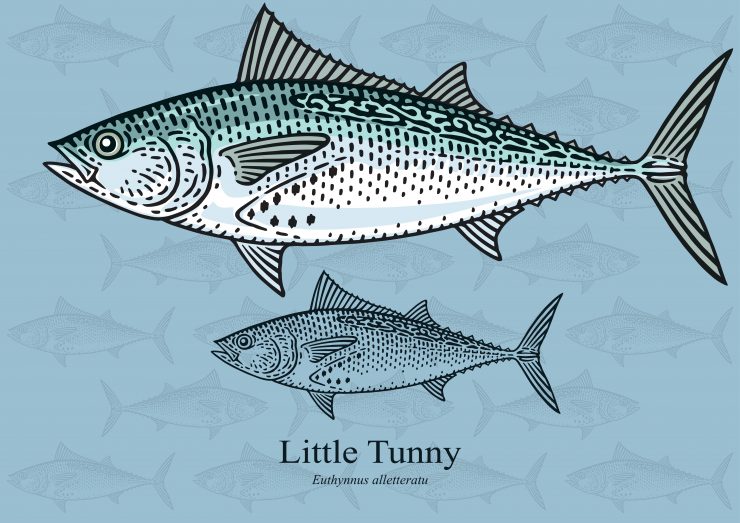 Little tunny is a type of tuna in the Euthynnus genus. It is the most common tuna in the Atlantic Ocean and is sometimes known as false albacore. Here’s everything you need to know about Little Tunny:

Little tunny is one of the smallest species of tuna; they rarely grow larger than 32 inches long and 20 pounds in weight. They are a steely silver-blue in color with a darker back that fades to white at the underside. They have distinctive dark spots on their sides and wavy markings on their backs, so it’s not hard to spot them.

Little tunny fish don’t have scales except around the corslet and along the lateral line of the body. They have a short snout, relatively small eyes, and a prominent first dorsal fin. They have two dorsal fins, two ventral fins, two pectoral fins, and several finlets along the back.

Little tunny tuna have several anatomical features that set it apart from other tuna. Their livers consist of disproportionate lobes, their stomachs stretch nearly the entire length of the body, and they have short intestinal tracts. A unique difference is that they have no swim bladder, so they must stay in motion constantly to keep from sinking.

Little tunnies are most easily identified by the mottled pattern on their backs, which resemble tangled spaghetti noodles or worms. They also have several dark spots on their sides behind the pectoral fins. They are often confused with other small tuna and related fish, but none of the other fish have similar dark spots or wavy markings.

Little tunny was first identified in 1810 by Constantine Samuel Rafinesque. Since that time, it has gained popularity as a baitfish. It has a relatively smaller fan base among people; its strong odor, dark flesh, and pungent flavor are loved by some and hated by others.

The world record Little Tunny was caught in Washington Canyon in 2006. It weighed 36 pounds.

Little tunny tuna live to be about 10 years old, and they reach sexual maturity around age 3. Spawning season is from April to November in the Atlantic. In the Meditteranean, the season only lasts from May to September, with the peak time being July and August.

Little tunnies spawn outside the continental shelf area, and they will only spawn in warm waters above 77 degrees F. Females lay between 1 and 2 million eggs per spawning cycle. Eggs hatch a day after being fertilized, and the fry quickly develops all the physical features of adults within a couple of weeks.

Little tunnies live in the warm temperate and tropical waters of the Atlantic, including the Gulf of Mexico and Caribbean Sea regions, as well as the Meditteranean and Black Seas. They tend to stay much closer to shore than other tuna species, especially the younger fish. They rarely dive deeper than 490 feet, and they seem to prefer brackish waters.

Little tunnies prefer warm water between 75 and 86 degrees F. They are known for migrating less than most other tuna species, but they will migrate toward warmer waters in the fall and winter months.

Little tunnies will form schools with other species based on fish size. Sometimes young fish will group together in coastal regions, while larger schools will congregate further out to sea.

Little tunny tuna feed on crustaceans, squids, clupeid fishes, and tunicates. Some of their favorite foods are largehead hairtail and Atlantic bigeye. They may feast on herring and sardines near the surface. What they choose to eat may depend somewhat on their stage in life. Little tunny is an opportunistic feeder, meaning it will feed on whatever is available.

Little tunny tuna are nocturnal feeders, and they mostly feed in schools.

Little tunny tuna are not commercially fished nearly as much as skipjack, albacore, and other tuna species. Even when they are caught, they are often released because a lot of people don’t consider them to be good for eating. For these reasons, little tunnies are not endangered, and they are classified as “least concern” for conservation purposes.

They are sometimes used as bait for marlin and sharks. Seabirds, sharks, rays, dolphinfish, swordfish, and many other marine predators prey on little tunny. Whale sharks, in particular, feed on little tunny eggs.

Little tunnies are popular for sport fishing because they are fast swimmers and hard fighters, so they provide lots of thrills for adventure-seeking sport fishers. They are most commonly caught by trolling with artificial lures near reefs.

Other fishing methods include bait casting, spin casting, fly fishing, and chumming. They are usually fished by boat, but you can sometimes catch them from the shore as well.

Little tunnies are found in both off-shore and in-shore waters. In the western Atlantic, they range from the New England states southward to Brazil, and in the east, from Skagerrak to South Africa. They tend to live near sandbars, inlets, and jetties, where they have the best luck finding food.

Some people consider little tunny a “trash fish” because it has a stronger taste and smell that most people don’t like. However, it’s an important commercial fish both for use as bait and, in some parts of the world, as common food. It is sold fresh, dried, frozen, smoked, and canned.

If you’ve developed a taste for it, you can eat it in much the same way as you would eat any other kind of tuna. You can eat it raw in sushi, or you can bake it, fry it, boil it, or grill it. You should bleed it and store it on ice as soon as possible after catching for safety and freshness.

Like most tuna, little tunny is a versatile fish that pairs well with most side dishes.