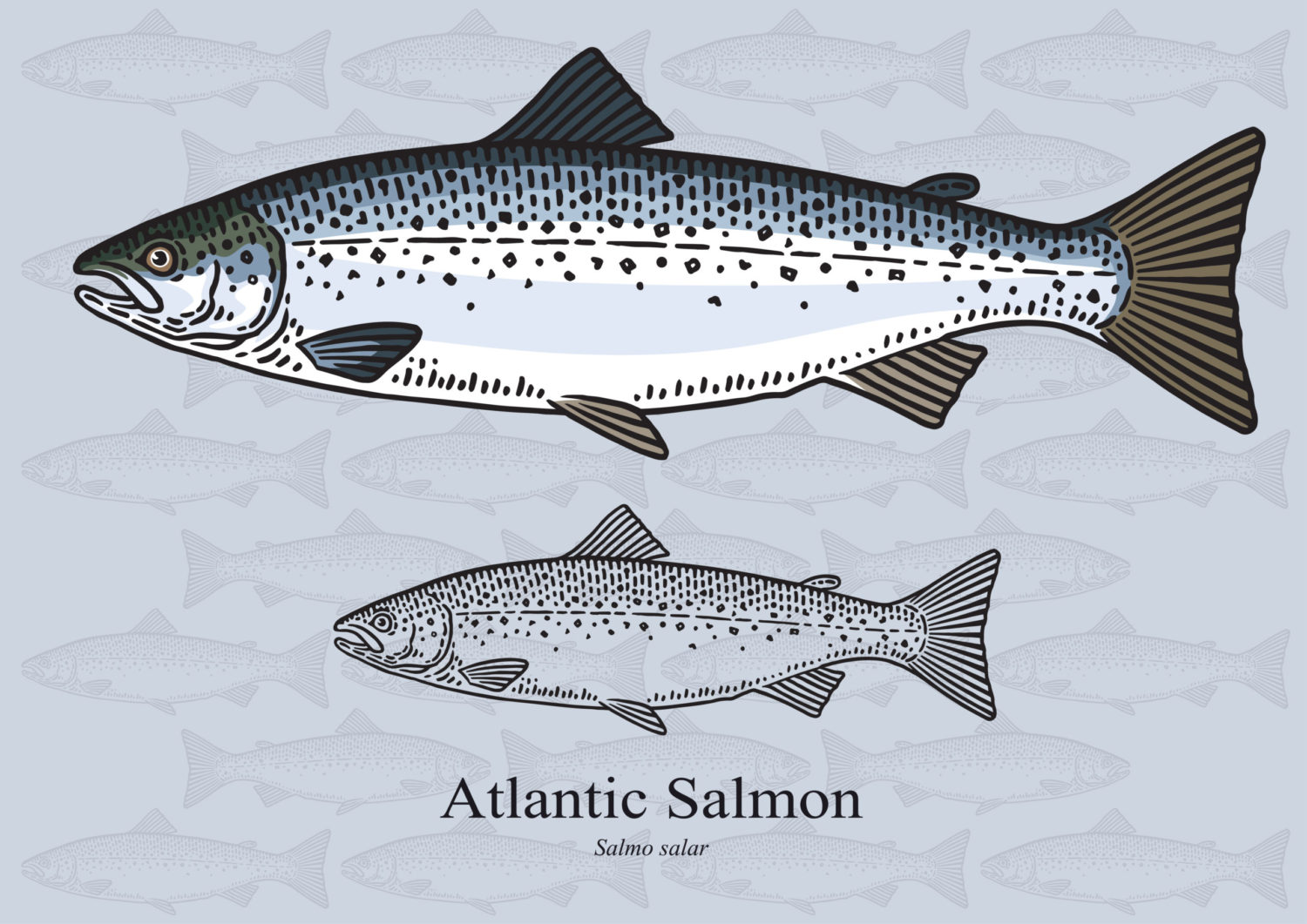 The Atlantic salmon is a large fish that is very popular as a tasty meal. These fish are also quite sensitive and very vulnerable in the wild. Due to some population issues, most of the Atlantic salmon that people consume come from farms.

Like most varieties of salmon, this fish lives part of its life in freshwater and part in saltwater. It migrates often over its lifespan, which also results in it changing colors over time.

The Atlantic salmon is an interesting species. Learning more about it can open your eyes to the struggles and the successes of this intriguing fish.

The Atlantic salmon is an anadromous species, which means it hatches in rivers and then moves to the ocean to mature. There are three populations of this species: 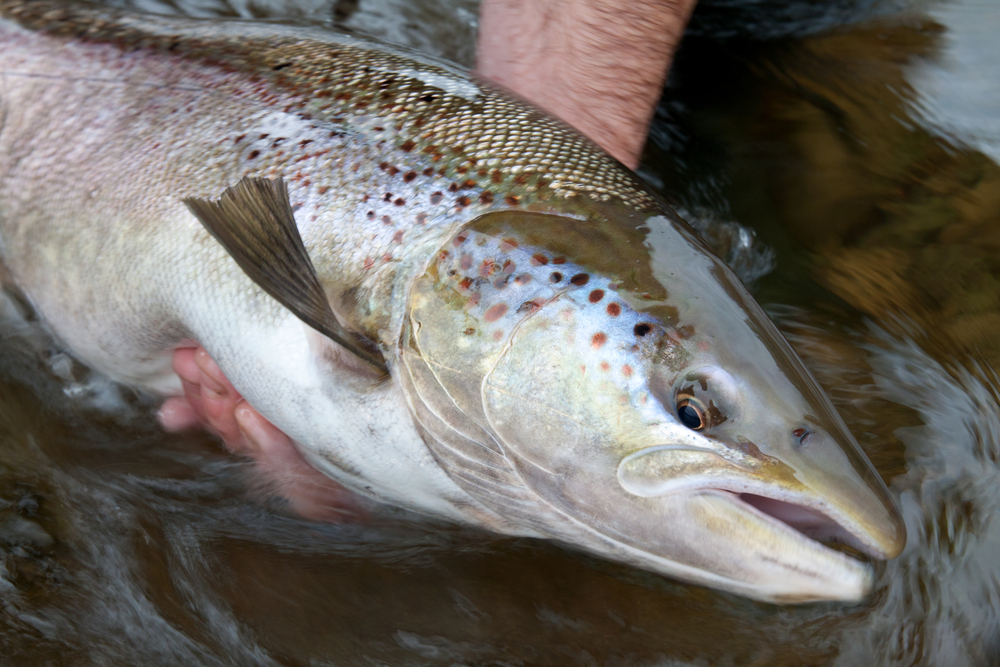 Atlantic salmon are ray-finned with a round body that tapers at each end. It has well-developed teeth and fins bordered in black.

Young fish are brown to bronze with red and black spots and dark bars along their bodies. The coloring provides the perfect camouflage in the rivers where they spend their early years.

Mature fish will change color as they migrate to the ocean. The vertical bars go away, and the coloring turns to silver with a white belly and black spots on the back. They will revert to a brown to bronze coloring when returning to the rivers to spawn. After spawning, males often take on a green or red hue.

The U.S. Fish & Wildlife Service explains the Atlantic salmon is a mix of European and North American salmon populations. They came together during the summer feedings off the Greenland coast. 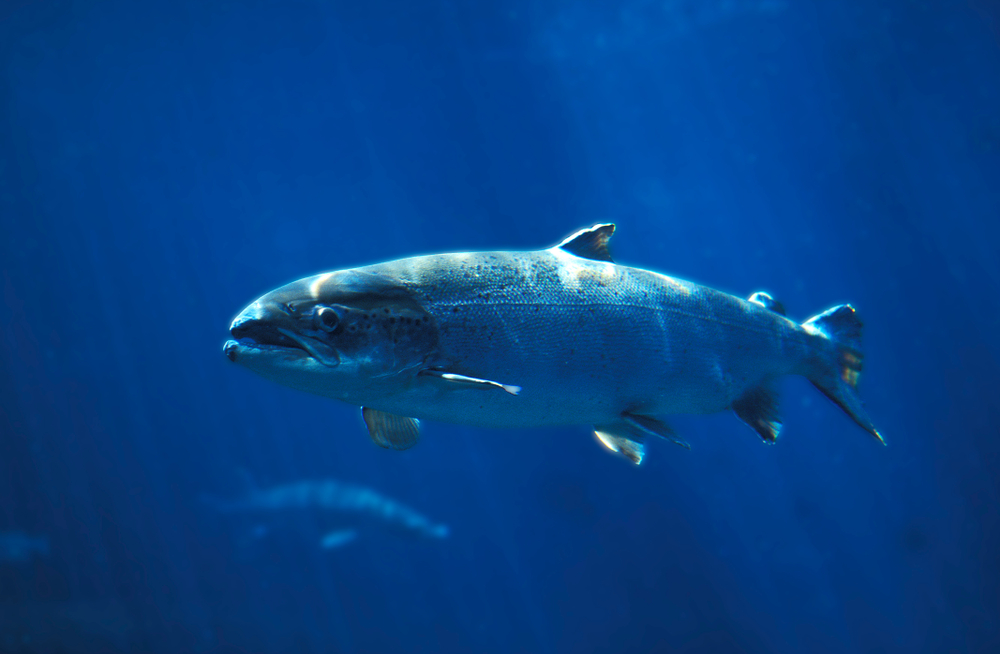 The salmon has an average size of 28 to 30 inches in length with an average weight of eight to 12 pounds. The highest reported weight was 103 pounds, and the longest fish reported was 4 feet 11 inches.

The Atlantic Salmon has an interesting life in the wild, moving back and forth between its native rivers and its preferred oceans. The fish spawn in swiftly moving water in the gravel or rubble bottoms. Eggs hatch in the spring, and juveniles stay in the river areas with covering and shallow water. They will move to the ocean when they reach about two or three years old. 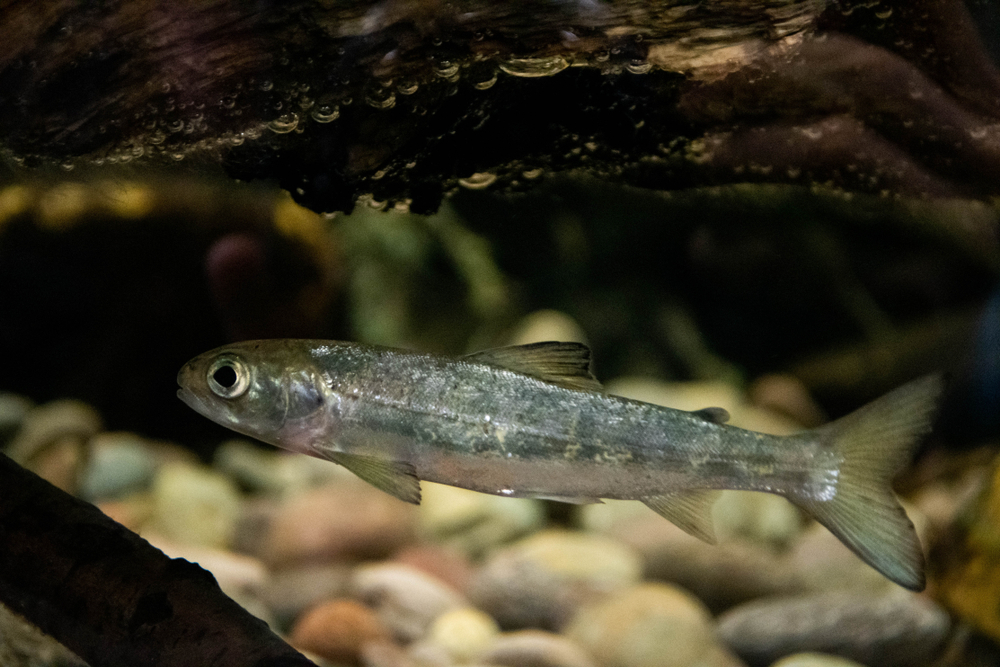 In the ocean, you’ll find these fish in depths up to 693 feet. They will spend another two or three years here before returning to the river.

The Atlantic salmon will go to the ocean again in the winter after spawning, but they often spend up to a year in the river to feed before making the migration.

They will stay in the ocean for a year or so before returning to the river to spawn again. Only about .3% to 6% spawn a second time. The average lifespan for this species is three to seven years.

These fish reproduce in coastal rivers in North America, Iceland, Europe, and northwest Russia. There has also been an introduction of them in New Zealand, Chile, and southern Argentina.

The species were one native to all coastal rivers running northeast of the Hudson River in the U.S. The last populations remaining in the wild here are in Maine. Populations are also declining in Europe. 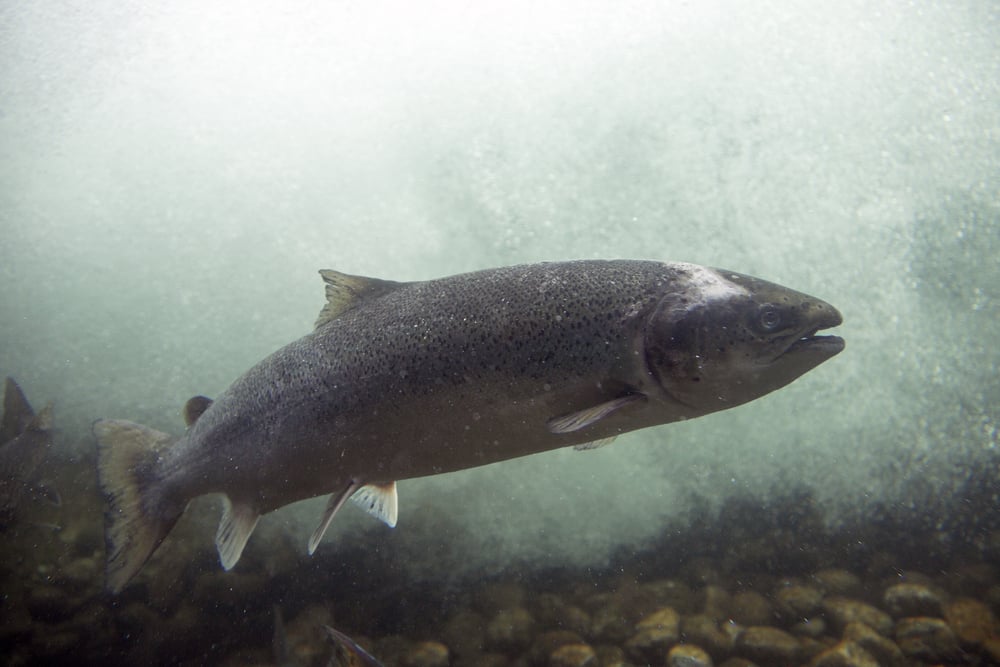 NOAA explains this species is vulnerable to stress. The water quality directly affects the health of this fish, which makes water pollution a severe threat. It also is easily infected by pathogens in the water, causing disease outbreaks that deplete populations.

The Atlantic salmon is on the endangered species list in the U.S. Recreational fishing is a significant danger to the populations. Most fishing for the species in the U.S. is for sport only. Habitat destruction is also a concern with building dams and culverts taking away the natural spawning areas.

Luckily, it is fairly easy to farm these fish. Farming provides the majority of fish for sale in grocery stores and markets in the country. 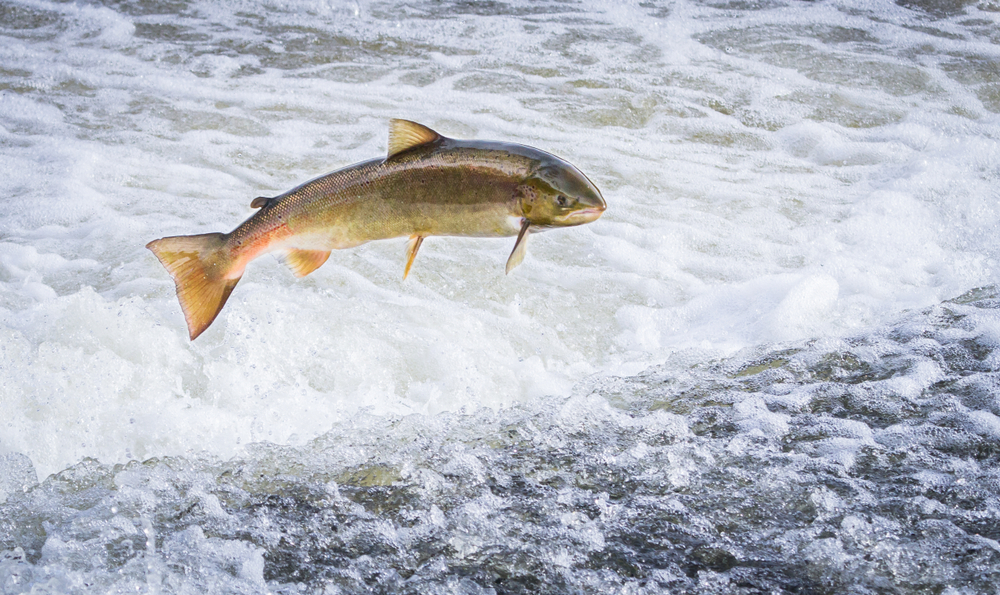 If you want to catch this fish in areas where it is legal to do so, you can do it using a variety of means:

The best option is to match the method to the place you fish. You also can use a variety of bait:

You’ll find these fish in many areas of the river or ocean, such as current edges, drop-offs, ripples, merging currents, and undercuts. You should always check local laws to see if it is legal to fish in the area before you set out to catch Atlantic salmon.

The Atlantic salmon is a very healthy food option. It is a common choice in many fish-based recipes.Wild salmon will have a more refined taste than farmed, and it is also brighter in color with less fat and calories. However, farmed is easier to get and cheaper.

Whether you catch your own or buy it from the store, you can make Atlantic salmon fillets, steaks, or sides. The New York Times explains you can make it with or without skin, which will depend on your chosen cooking method.

Cooking methods include grilling, which requires oiling the grates generously to avoid sticking. Place the skin side down and then flip for light cooking on the other side. It should loosen up when done to allow for easy flipping. 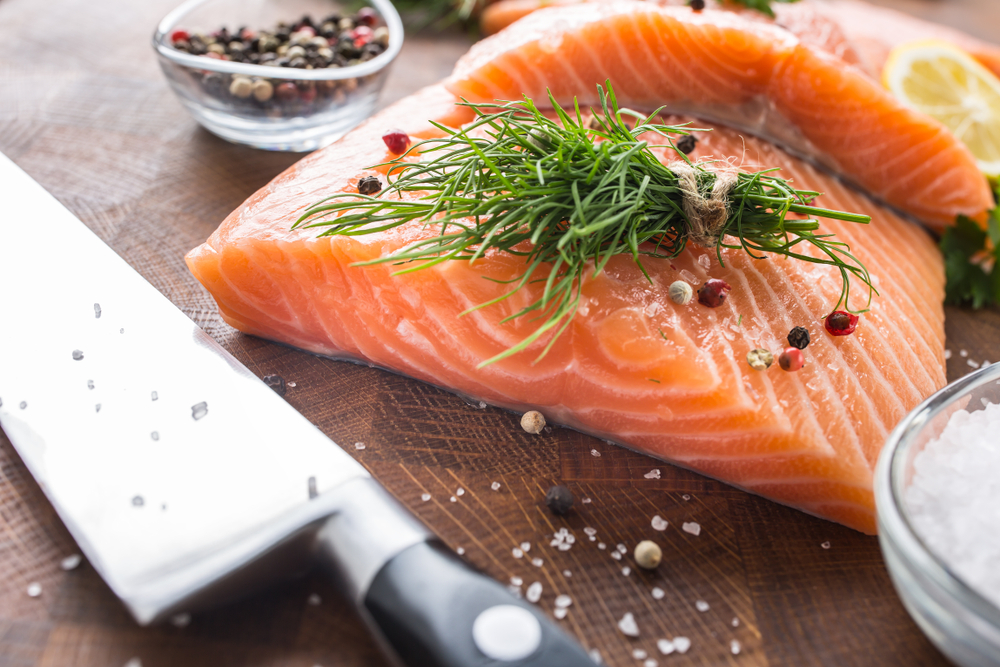 You can broil it, which is exquisite when using a wood plank. Pan-frying in butter is also great as long as you baste it while cooking. Roasting is an option to secure in the moisture. You can pan-sear it first for a crunching skin and then finish in the oven. Poaching is the ideal cooking option if you want to keep fat low and add a sauce to finish the dish.

You may want to remove the pin bones before cooking. You don’t have to, but many people prefer it boneless. Use pliers to pull them out. You should be able to run your hand along the fish and feel where they are.

Remember that you can eat salmon slightly rare. Cook it to whatever you prefer. Rarer fish will have a softer center. Avoid overcooking as it will result in a dry fish.