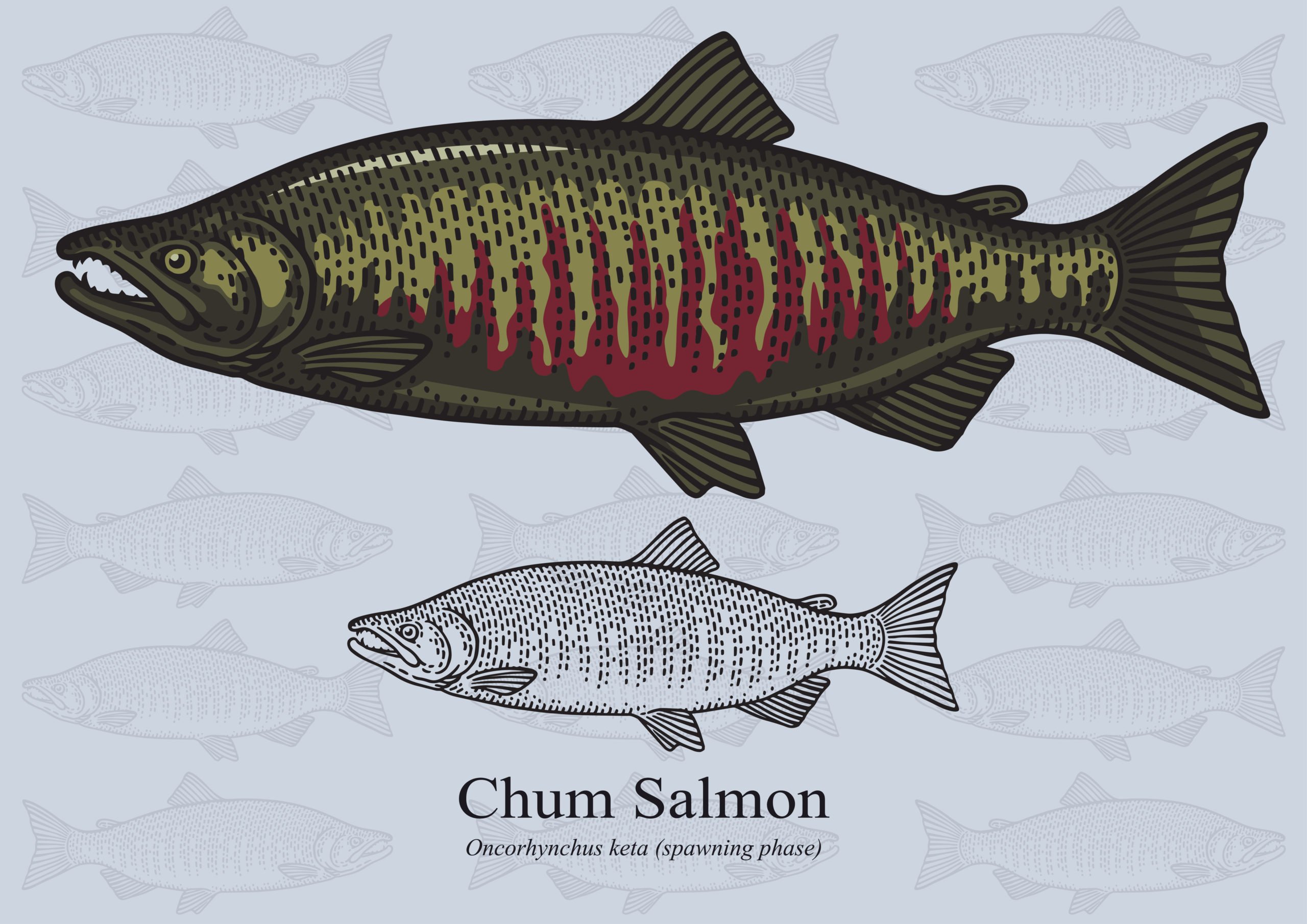 Chum salmon, sometimes referred to as Dog salmon, are a widely dispersed Pacific salmon. This species is the most commonly spread of its kind, and is mostly found throughout Alaska. Chum salmon spend most of their life in saltwater, where they feed before they mature and return to freshwater. Here, they spawn once during the fall and then die.

Many Chum salmon groups do not travel long distances upstream, but some make it up to the Yukon River, over 2000 miles away from their origin. In areas like Northwest, Arctic, and Interior Alaska, these salmon are a reliable source of dried food in the winter.

As Chum salmon migrate into freshwater, their color switches to a darker olive green, and the belly turns less pale. When adult chum are in spawning stages, they get purple streaks toward the tail. Spawning male Chums usually develop a longer snout, its lower fins will grow a white tip, and the teeth become larger. 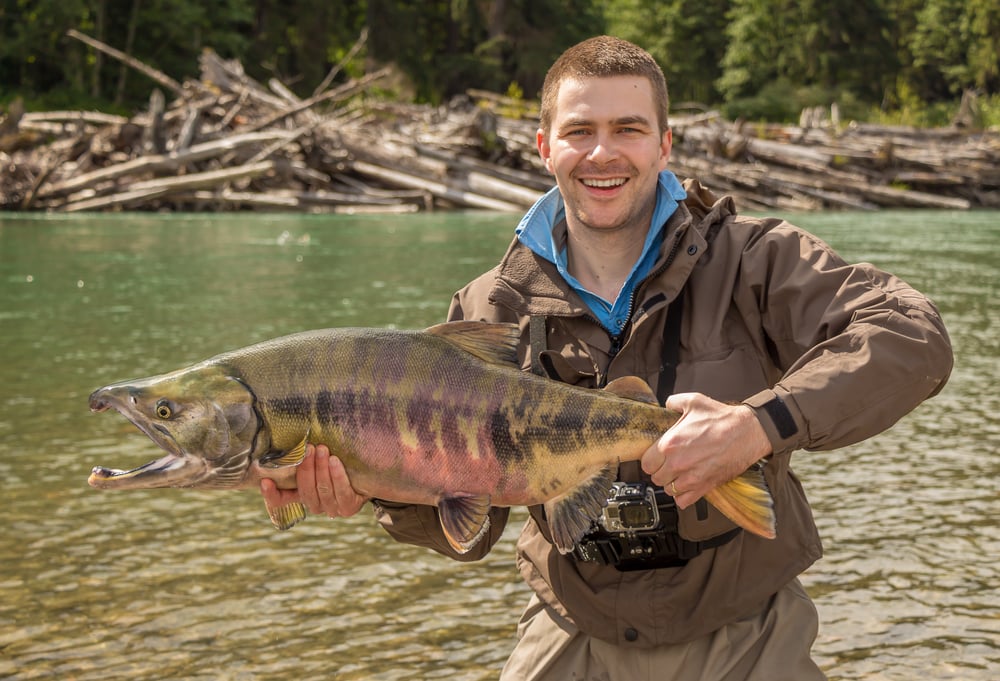 Chum salmon are an anadromous species that historically spend most of their lives in the ocean waters and migrate to freshwater streams to reproduce or spawn. This species is the second largest out of all the Pacific Salmon, right behind the Chinook salmon.

In the ocean phase of its life cycle, the Chum salmon are similar to Sockeyes or Coho salmon. The younger Chum salmon will formulate schools in freshwater and huddle close to the shore to shield against predation throughout history. 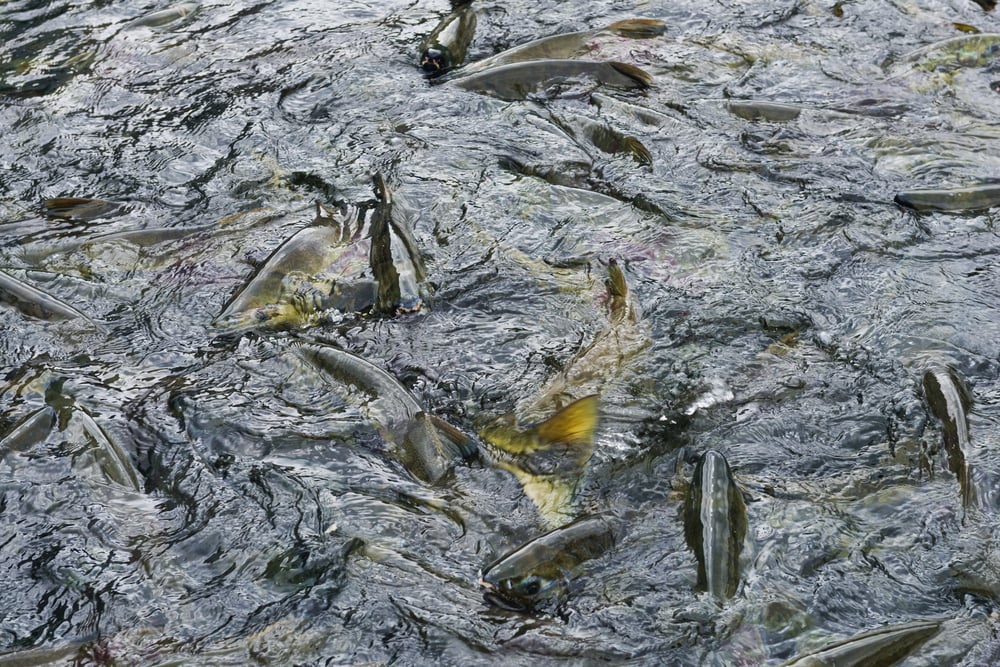 The world record for this salmon is 35 pounds or 15.87 kilograms. It was caught in July 1995 by Mr. Todd Johansson. The world record salmon swam in Edye Pass, located in British Columbia, Canada. This saltwater channel is situated between Prescott and Arthur Islands. 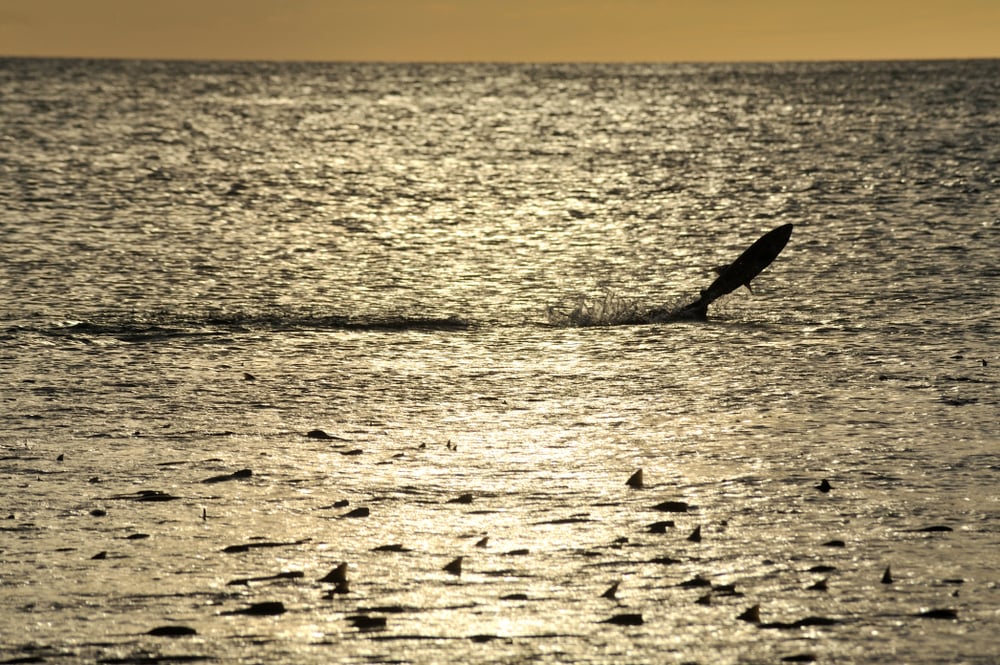 The female Chum lays her eggs in gravel depressions once males release sperm for fertilization. Once this process is complete, the female puts gravel over the eggs and guards this area until she is not strong enough.

The embryos will hatch once 3-4 months pass by, depending on the temperature and climate. Before emerging from the gravel, the hatchlings will soak up nutrients from the egg yolk for 2-3 months. After a couple of days or weeks, the newly born salmon will migrate to the sea.

After they arrive to the sea, they spend many months near the shore before scattering into the ocean. Chum salmon grow a lot over the next 3-4 years, normally reaching over 12 pounds. Most of this rapid growth occurs during the final year in the sea. 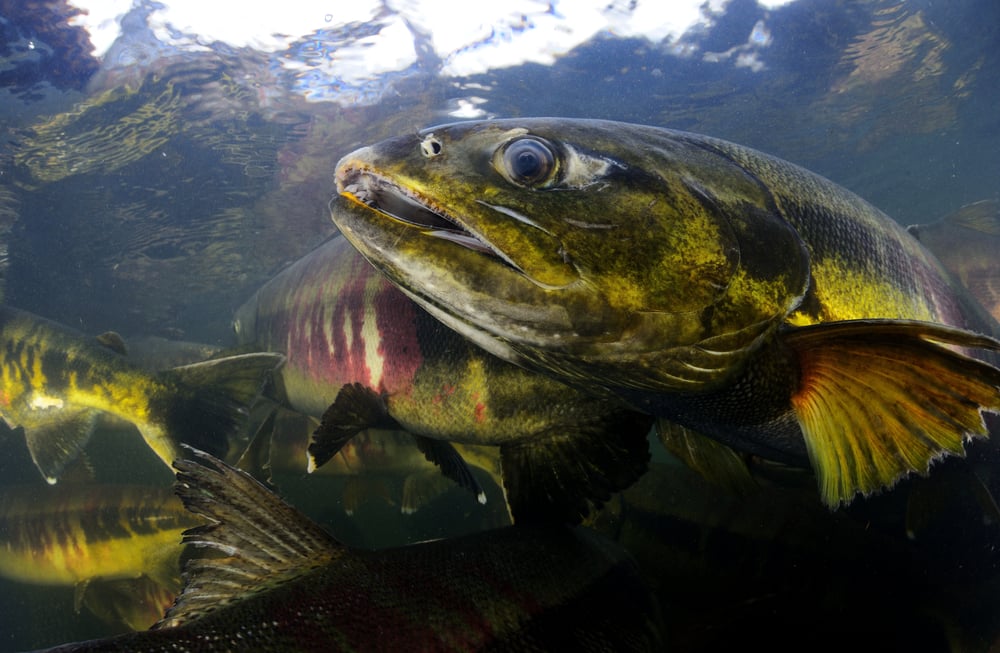 Chum salmon are a very widely dispersed Pacific salmon species. Their habitat spans through Alaska, but you will not find any north of Kotzebue Sound. You can also find Chum along the East and West coasts of the Northern Pacific Ocean near California, Kyushu, Japan, and the Arctic ocean next to the Anderson and Mackenzie rivers in Canada.

Chum Salmon typically spawn in the lower sections or mouth of rivers. But Chum will sometimes travel far upstream to spawn. When they are in the early stages of their life, freshwater is the usual habitat before moving to the ocean.

The diet of younger Chum includes various insect larvae as they move downriver. They will also feast on marine invertebrates when they live near shore in the early stages of life. When they reach the sea, adults typically eat various fish, squid, mollusks, tunicates, and copepods. During the spawning period, the salmon will stop feeding and utilize the energy stored in body tissues to fuel the process.

Even though salmon species on the west coast have declined in the past 25 years, the Alaskan Chum salmon populations are staying steady. This status is due to the healthy freshwater habitat in Alaska. During the mid-1900s, the populations in Southeast Alaska did decline. Since the state’s hatchery program began in 1971, the population numbers returned to higher levels. 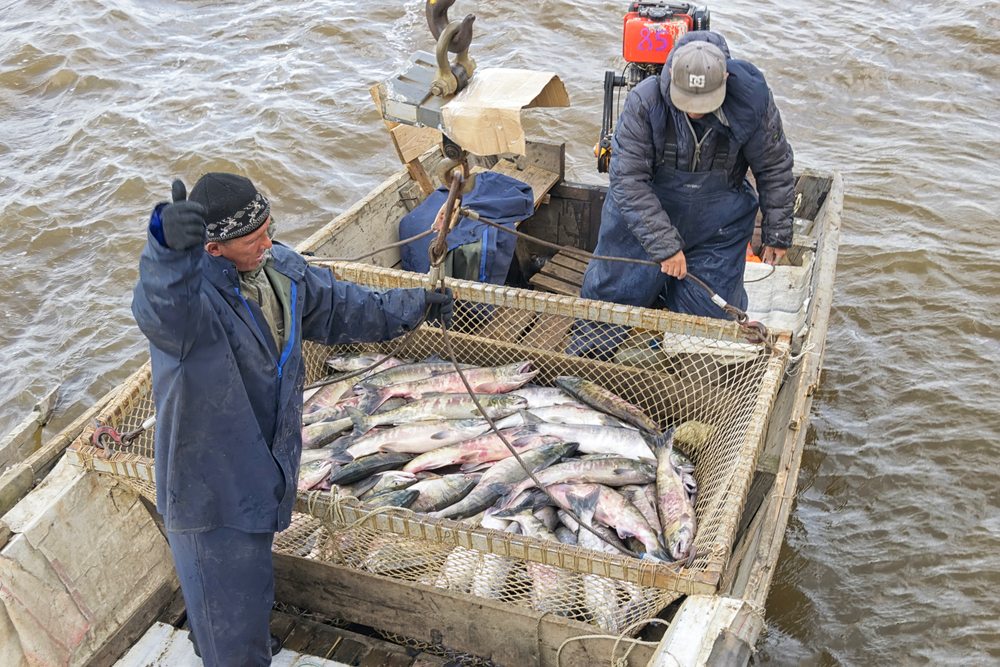 Chum salmon are mostly caught in flowing water while traveling a speedy pace. As you pick out your lures, you should focus on colors like pink glow, pink with sparkle, green, or chartreuse. A helpful tip is to place a “hoochie” on the backside of your spinner to increase your chances.

One of the more effective methods for catching Chum salmon includes float fishing jigs. To successfully implement this technique, you should focus on your jig color and setup depth. Like most float fishing setups, you should place your gear slightly above the salmon. This is referred to as short-floating.

You can also implement casting lures or spinners to bring in a catch. Spey fishing and fly fishing with a fly rod are useful tools to capture these fish. Floating lines with sink tips or weight flies will help raise your chances of flagging down a Chum salmon in both stagnant and flowing water. 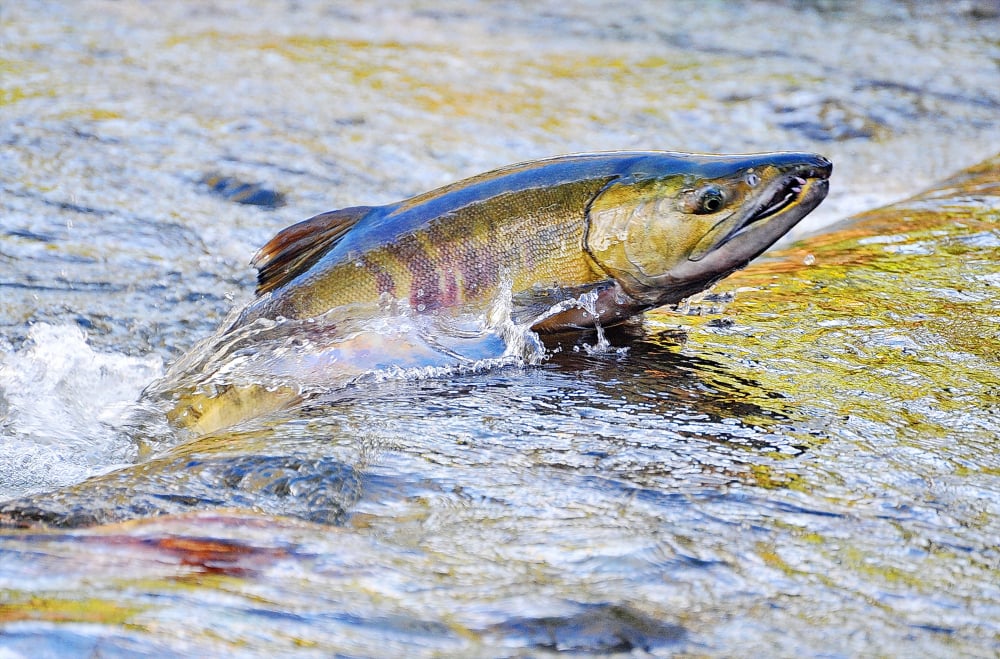 A 100-gram serving size of Chum salmon packs 20 grams of protein, 120 calories, 4 grams of fat, and 0.7 grams of omega-3.  Its flakiness and mild taste make it a viable meal. It is much more affordable than Chinook and Sockeye.

When you buy Chum salmon, it is available both frozen and fresh/ It can also be smoked or canned. In Japan, Chum salmon eggs are offered as Ikura, and they usually go for a higher value. When cooked right, Chum salmon provides a delicate, refreshing taste for a low-sodium option. 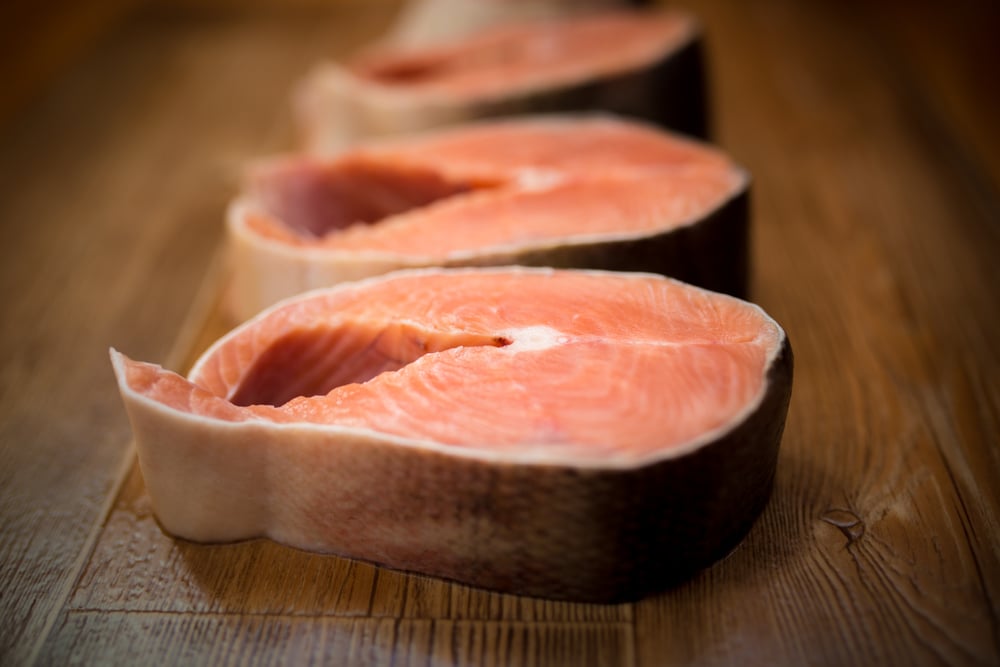