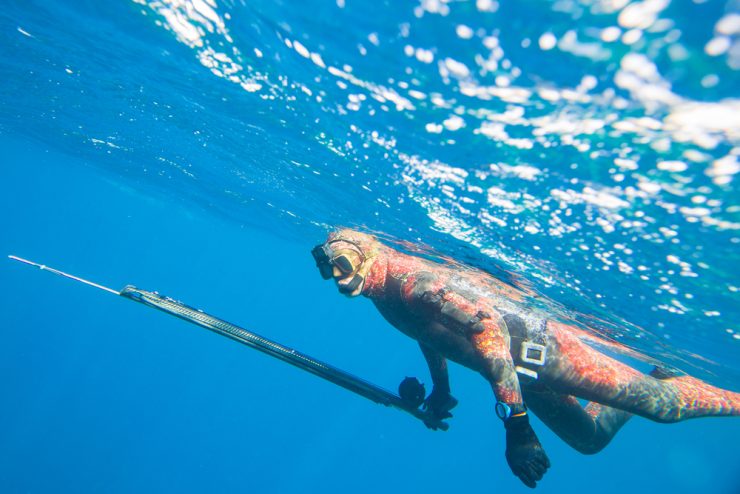 Home > Places > The Best Spearfishing Destinations Around the World

The Best Spearfishing Destinations Around the World

Spearfishing is an intense form of fishing: essentially hunting for fish underwater, spearfishers dive into the ocean and face the fish directly. This style of fishing takes more athleticism than some other, more relaxed forms. It also requires more ideal conditions.

Spearfishing places the spearo right in the water, so the temperature is an important factor. Visibility is also vital when spearfishing, as spearos need clear waters to see where they’re swimming and to see the fish around them. Avid spearos travel the world to spearfish in the best destinations, known for spearfishing.

Where To Go Spearfishing

Globally, there are a few places notorious for great spearfishing conditions and amazing catches. Check out these top spearfishing destinations to plan your next spearfishing adventure.

These are the Top Spearfishing Locations:

Ascension Island is the place to go spearfishing, if you’re serious about the sport and can manage a trip. This small volcanic island is in the middle of the Atlantic Ocean between Brazil and Africa’s western coast, just south of the equator.

The waters are crystal clear, and its location near the equator mean warm weather year-round. Many spearos catch prize-winning fish here, and fish of all sizes are abundant.

Cape Verde, off the Western coast of Africa, is an archipelago of islands like Hawaii, but with two more small islands. This string of islands is well known as one of the top spearfishing destinations in the world.

If you’re looking to catch an exotic tropical fish, Hawaii is the place to go. Already known for crystal clear waters and warm temperatures, Hawaii makes for a great spearfishing destination and island getaway, all in one.

If you’re from the U.S. and don’t want to travel globally, the Florida Keys offers amazing spearfishing right off the continental United States.

The Florida Keys, off the southern coast of Florida, provide ideal spearfishing conditions. There is warm water, great visibility, and abundant, large fish to catch. There are also plenty of reefs, both natural and artificial, that attract marine life and make for great target areas when spearfishing.

Both Australia and the nearby island of New Zealand offer excellent conditions for spearfishing. The warm temperatures, clear water, and trophy-sized fish make these two neighboring countries an extremely popular destination for fishing of all kinds, including spearfishing.

Australia is also home to the Australian Titles Spearfishing Championship each year, adding to the appeal of spearfishing in their waters.

The Pacific Coast offers abundant opportunities for spearos, whether you prefer the cooler waters of Northern California or a warmer climate in Southern California.

Many spearos cite San Diego as the best location in California. San Diego has one of the largest fisheries in the country with plenty of species to target. California water conditions can vary however, so be sure to check your location and the forecast before you make the trip.

The Gulf of Mexico

Where To Go Spearfishing Next

These are the top destinations worldwide for spearfishing, but there are ample opportunities elsewhere as well. Keep an eye out for clear waters with good visibility and warm weather. As long as you have your spearfishing gear with you, then you’re ready.