There are few thrills quite like reeling in a huge fish. It’s a combination of adrenaline, exertion, and no small amount of anticipation.

Fishing is something that mankind has done for thousands of years and the tools at our disposal have been perfected continually, to the point where fishing today can often lead to catches far exceeding what may have been possible in the past.

It’s no secret that there are huge fish out in the vast expanses of the ocean. After all, the human imagination has told stories for a long time of sea creatures, abyssal giants which would send shivers up anyone’s spine. 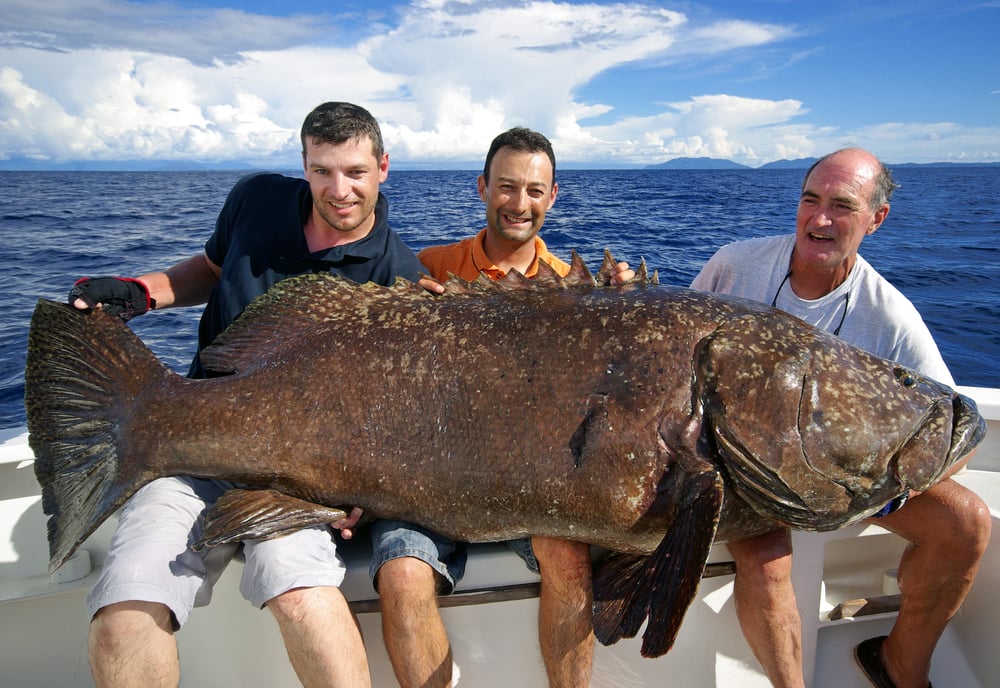 While a lot of these creatures are mythological and clearly fabricated, it isn’t too much of a stretch to believe that the tall tales may have been inspired by real fish witnessed by sailors.

The size some fish can reach is staggering, and while human sea exploration remains in its infancy, we have come across some staggeringly unique species of fish, many of which can reach truly absurd sizes.

Another important thing to note is that many of these catches were made before modern conservation efforts began, so many of the rules that prevent anglers from targeting these fish today mean that some of these records may never be broken, as it is illegal to target some of these fish and it certainly wouldn’t be acceptable to applaud the act of doing so.

Nonetheless, in this article we’re going to look at some of the biggest fish to have ever been caught in history, to give you an indication of just how impressive some of these fish are, and how incredible it must have been to catch them.

The Goliath Grouper certainly lives up to its name, weighing in at a whopping 680lbs. This fish was caught back in 1961 at Fernandina Beach in Florida, where there was once a famous Grouper fishery.

This remained a popular spot up until the 1990s, when the population numbers of the fish started to suffer, leading to the banning of fishing for this species here.

The fish was caught by Lynn Joyner who used a Spanish mackerel to bait the monster in.

The Bull Shark is one of the most aggressive sharks in the sea, so it’s no surprise that they land on this list due to their stout midsection and muscular bodies.

This shark was caught off the coast of Malindi in Kenya on March 24, 2001, and is one of the biggest bull sharks ever landed.

It was caught by Ronald de Jager who managed to catch it by using a live yellowfin tuna as bait. After an arduous battle, the previous record set in 1994 was beaten by a healthy 12 oz.

In 1982 this huge Dusky Shark was caught off of Longboat Key in Florida by Warren Girle.

Thresher sharks are notoriously difficult to catch and live up to their namesake by threshing wildly and attempting to smash the bait with their tails before actually taking the hook.

This makes the fact that such a huge specimen was caught even more impressive as it requires an immense amount of composure and skill to successfully land a monster of this size.

This particular fish was caught by David Hannah in the Bay of Islands, New Zealand on the 26th of February 1983. He used a Kahawai Salmon for bait.

She used a Kahawai salmon to successfully hook the shark and battled it for nearly 4 hours before eventually exhausting it and managing to bring it in.

Both this catch and the prior Thresher were both caught in a very similar location, around 30 miles apart from each other, and used the same bait, even occurring in the same month just a few years apart.

This impressive tuna was caught in the Three Kings Islands New Zealand by Donna Pascoe in 2014. This enormous tuna would’ve been difficult to catch on a clear day, but Donna battled this beast during challenging weather making it even more impressive.

This 14’ long swordfish was caught by Lou Marron in Iquique, Chile back in 1953. Marron used a bonito to bait the swordfish in.

The shortfin Mako is known to be one of the fastest and most animated sharks in the ocean, and this huge specimen would be no exception. Caught by Luke Sweeney during the Oak Bluffs Monster Shark Tournament in 2001, this fish was fought for 3 hours on one of the smallest boats in the competition!

Bucky Dennis caught this hammerhead using a stingray for bait, however, the shark was so large at 14.5’ it actually pulled his boat over 11 miles out into the sea off of Boca Grande in 2006.

This particularly rare and elusive shark was caught by Clemens Rump off the Ascension Islands in one of the most remote areas of the Atlantic in 2002.

The impressive thing about this catch is that, despite its size, angler Jay de Beaubien only battled this huge fish for around an hour. It was caught off Kaaiwi Point in Hawaii on May 31, 1982.

Angler Paulo Amorim caught this Marlin near Vitoria in Brazil in 1992, making it a record-breaker for Atlantic Blue Marlin.

The seas around Nova Scotia are famed for their access to large tuna fisheries. While Tuna is far more protected than it once was, making anyone’s chances of beating Ken Frasers record a very unlikely prospect.

Caught in 1953, this catch was one of the longest world records to hold the title and it still holds the record to this day. It was caught by famed angler Alfred C. Glassel Jr. off Cabo Blanco Peru, and this fish is now actually preserved at an exhibit in the Museum of Natural Science in Houston!

This rare sight was caught by Terje Nordvedt near Trondheimsfjord, Norway in 1987. The amazing thing is that these sharks are actually the longest living vertebrate species in the world, so seeing one in the flesh must have been a huge privilege as they can live up to 400 years old!

The Tiger Shark is notorious for its size and aggression however this one couldn’t escape from Kevin J. Clapsom in 2004. It was caught near Ulladulla in Australia and is technically tied with a catch from 1964, due to only being 11oz heavier than the title-holding catch.

Finally, we come to the biggest catch in history, one that is unlikely to ever be beaten. This White Shark was caught off Ceduna, Australia in 1959 before the strict preservation laws of the modern-day existed.

Alfred Dean will likely hold this record for a long time in the future due to the fact these sharks are protected almost worldwide now.