Home > Saltwater Fishing > Cod vs. Haddock: What is the difference?

Cod vs. Haddock: What is the difference?

Two of the most popular and tastiest fish in the world, Cod and Haddock are white fish species that often have comparisons and discussions drawn against one another. Both have their distinct advantages and disadvantages, so it’s all down to personal preference when choosing which is the best fish for you. 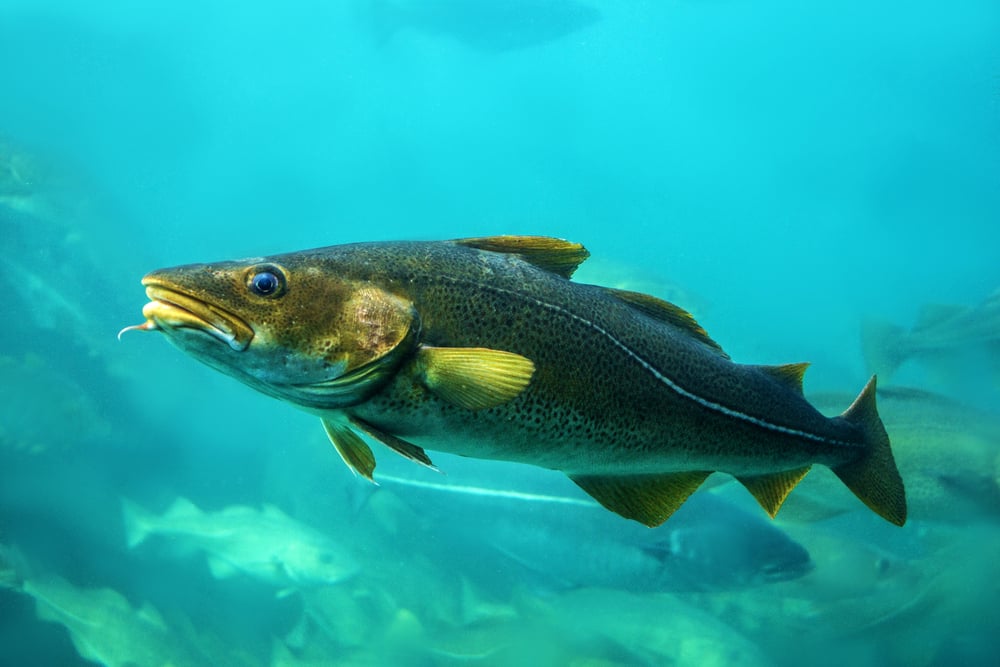 This guide will provide you with all the information you need when making your decision, including how to identify the two fish, recognizing their different tastes, and finding which is more sustainably caught.  What is the difference between cod and haddock?

Cod and Haddock are close relatives, so exhibit many of the same characteristics in terms of their appearance. There are, however, some notable, distinguishing features that help to tell the two apart.

Firstly, Cod have speckled green-brown skin with a white or cream lateral line, whereas Haddock’s lateral line is usually dark grey or black, and their skin a similar color.

Another difference between the two are their front dorsal fins. For Cod, all their dorsal fins are roughly the same in length. However, Haddock possess a pointed front dorsal fin that’s significantly longer than the others along the rest of their body.

In terms of body shape and size, Cod are generally larger and fatter than Haddock. Cod fillets are also a lot thicker in contrast to Haddock fillets which tend to be thin and flat.

One of the main reasons that Cod and Haddock are so popular is the delicious taste they provide. Both fish are from the same family and reside in fairly similar water, so you’d have thought the two would taste the same, right? This, however, isn’t the case.

Cod has a milder, cleaner taste, whereas Haddock’s flavor is stronger and extra “fishy”. As mentioned earlier, Cod fillets are thicker and firmer in shape. This makes them great for grilling or searing as they don’t tend to overcook as easily.

Haddock fillets are thinner and a little more fragile. Therefore, they cook through super quickly and are ideal for frying.

Cod is generally lower in calories, so favored over Haddock for people following low-calories diets. In addition, neither fish contains carbohydrates, so both are suitable for diabetics and those on low-carbohydrate diets.

In terms of fats, both fish contribute to roughly 3% of the daily recommended intake, when 300g of the food is eaten. Haddock is generally lower in saturated fats, while Cod is lower in sodium, cholesterol, and glycemic index. In addition, Cod has higher levels of polyunsaturated and monounsaturated fatty acids.

This is becoming an increasingly important consideration. Selecting sustainable fish isn’t just beneficial for the oceans, it supports communities that are trying to manage their fisheries responsibly.

Of all the fishing methods, the most sustainable way to enjoy fish is to catch it yourself. Not only is this a thoroughly rewarding process, you’ll also be using techniques with little or no by-catch. Therefore, you’ll only catch as many fish as you need – with there being no unnecessary harm to other fish.

Much of the commercially-caught Cod and Haddock is unsustainable. Atlantic Cod, perhaps more than any fish, is commonly overfished. Nevertheless, a fish’s sustainability varies with where the fish was caught and the methods used to catch it.

As a general rule, it’s advisable to look for line-caught fish with the MSC Blue Label – this means it’s certified sustainable. Furthermore, if you want to be certain that your fish is sustainable, the Monterey Bay Aquarium’s Seafood Watch provides useful guides for all common food fish within the US.

Is Cod or Haddock better for fish and chips?

For most chefs and experts, Haddock is the fish they prefer using for fish and chips. While the texture isn’t quite as flaky or tender as Cod, the meat has significantly more flavor. Haddock also has a slight sweetness that pairs really nicely with the buttery taste of the batter.

It’s worth noting, however, that Cod is by far the most popular choice for fish and chips. The mild flavor of the tender meat provides a nice contrast to the crunchy outer shell of the batter. Its subtle flavor also works well with salt and vinegar.

Should you avoid some types of fish because of mercury?

Many types of fish can contain high levels of mercury which is toxic. In fact, mercury exposure has often been linked to several serious health problems. Cod and Haddock both contain mercury, albeit a significantly less amount than other fish such as Swordfish and King mackerel.

Excessive mercury in the body is known to have both behavioral as well as neurological implications. Pregnant and breastfeeding women also need to be careful in regards to mercury consumption.

To conclude, Cod and Haddock share many similarities. Both are full of protein and make great lower-fat substitutes for red meat, while both are similar in terms of their sustainability.

If however, you’re looking for a specific taste, or perhaps a particular nutritional quality, it’s useful to know the differences between the two. For example, fish eaters who prefer a stronger taste would be best going for Haddock, while people who like a milder and cleaner flavor would be right in opting for Cod.