Can You Eat Bowfin Fish? 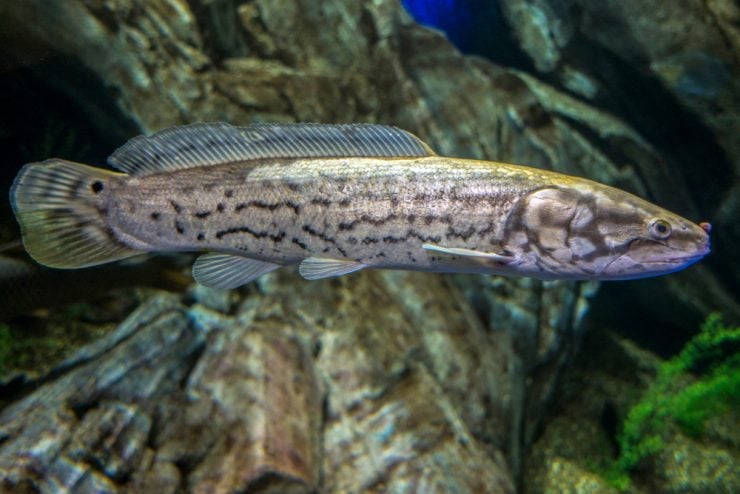 The slimy, voracious Bowfin has been around for over 145 million years and survived the dinosaurs and a plethora of other animal species. This prehistoric beast is more tenacious than a pterodactyl. It is tougher than a pteranodon. But here’s the real question: can you eat bowfin fish? Well, read here and decide for yourself.

Is Bowfin Fish Edible and Safe to Eat?

It’s ugly. The bowfin, or Amia calva has an elongated body and is a mottled olive-green and brown color. It is covered with heavy scales, its head has bony plates, and the mouth is full of sharp teeth. This freaky looking fish is very slimy and can even swim backward.

Yes, they are safe to eat, but why would you want to? There are far more tasty fish out there to catch. Some game fishermen regard bowfin as “trash fish” and, unfortunately, kill them.

How Big Is It?

The female bowfin is larger than the male and can reach 30 inches and a weight of nine pounds. Males can grow in size from 18 to 24 inches, but they can get much longer. The longest bowfin was caught in South Carolina and weighed in at an astounding 21 pounds and was 34.3 inches in length.

Where Are They Found?

Bowfin is a native fish found in the slow running fresh waters of the eastern parts of North America down to the Gulf of Mexico. These predators spend most of their time at the bottom of lakes, swamps, and rivers. And that is why they are also called mudfish, or sometimes swamp trout, swamp-muskie, and even grindle or dogfish.

No one really eats bowfin, but we did discover a few hardy fishermen who have tried a bite or two. They say it’s soft, of poor texture, and tastes bland. Mostly it was the mushy consistency and the greyish color that put them off.

How Is It Prepared?

Those who tried it say that after cooking a bowfin it is kind of grey and jelly-like. Of course, there are the brave souls that insist that you can eat anything with proper preparation, the right seasoning, and the correct cooking methods.

You have to keep the fish alive until you decide to cook it or the meat gets mushy. And when you fry them, cut them up into small pieces. Larger, thick steaks become like jelly when cooked. Apparently, it tastes ok with tomato gravy over rice.

After reading all this, do you still have enough guts to eat a bowfin raw? We don’t recommend it.

Why Is the Bowfin So Hated?

The sad reality is that most fishermen dislike bowfin, pull them out, and kill them. There is a misconception that these strange looking fish hunt young game fish that are more desirable for fishermen. There is also a lot of confusion between snakeheads and bowfin. People think bowfin are as destructive and invasive as snakeheads. Snakeheads look a lot like bowfin, but they are not a native fish in North American waters. Bowfin are a native fish that has stood the test of time and is the only surviving member of the Amiidae family.

Why Do We Need Bowfin?

Bowfin is highly adaptable and prefer the sluggish, less oxygenated waters of lakes and rivers. Bowfin assist in maintaining the ecosystem balance by eating the fish that are most abundant. This keeps the numbers of foraging fish down and prevents overpopulation.

This outrageous fish may be ugly and taste horrible, but the bowfin is ours and has been around for millions of years. We don’t recommend eating it, but let’s do our best to keep them around a few million more!