Can You Eat Toadfish?

Let’s be honest. Toadfish are not an attractive fish. In fact, they are probably one of the ugliest species you’ll ever catch. However, some people are curious enough to ask can you eat toadfish? The answer is that if you can get past the grotesque appearance of this fish, you definitely can eat it. While many anglers consider this a bait-stealing trash fish, there are plenty of people enjoying it as a meal.

Toadfish get their name from the grunting and croaking sounds they make, which can mimic the sound that a toad makes. However, these fish also resemble toads in that they have large heads, round noses, and plump stomachs. They are typically found in the warm waters off the coast of North America and max out in size at about 16 inches. Most toadfish have few or no scales, making it one of the easier fish to clean.

With the exception of smooth toadfish, which are found mostly in Australian waters, toadfish can be eaten. Smooth toadfish are extremely poisonous to the point where they have no known natural predators. Tetrodotoxin, which is 100 times more toxic than potassium cyanide, accumulates in the liver, intestines, ovaries, and skin of the smooth toadfish and can cause paralysis of voluntary muscles, rapid heartbeat, and loss of sensation in the extremities. Australian fishermen avoid this fish with a passion!

The oyster toadfish, on the other hand, is perfectly edible, especially if it is prepared correctly. They don’t yield much meat because they are pretty bony, but if you catch one of the larger ones, you can get a couple of good-sized fillets. You’ll discover that the meat is not flaky like that of many white fish. Instead, it is firm and dense. The people who love toadfish say the best meat can be found behind the eyes and jaws. 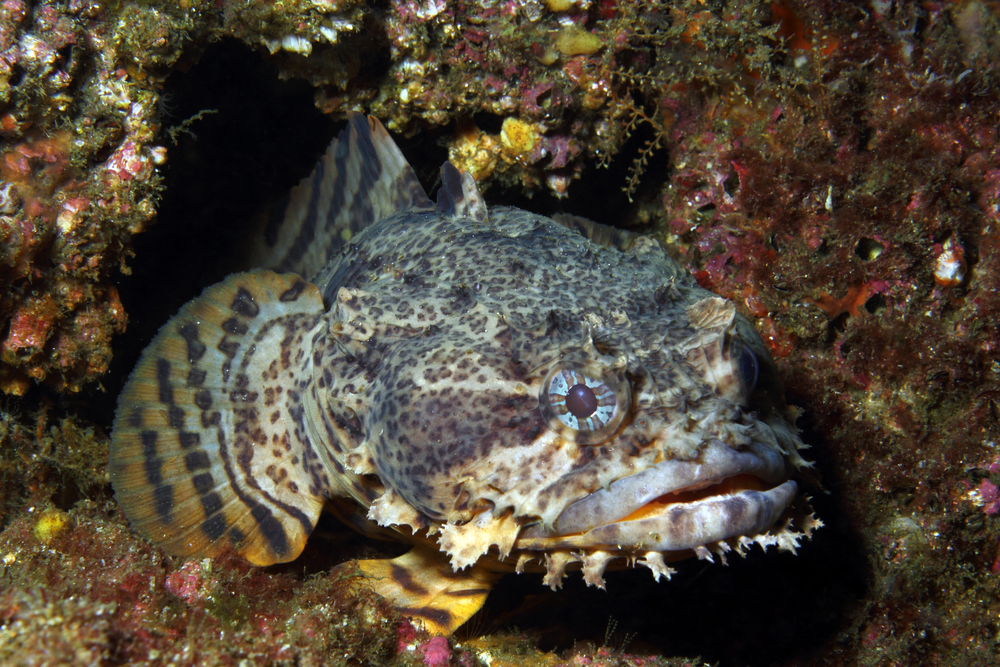 Many people find it difficult to get past the regrettable appearance of the toadfish, but if you’re able to do that, you’ll learn that the meat is fairly sweet. If you’ve ever eaten blowfish, the taste of toadfish is very similar. Blowfish are very mild in flavor and are considered delicacies in many Asian markets. This same subtle flavor is characteristic of the toadfish, but you won’t have to worry about the oyster toadfish being poisonous like the blowfish.

Most preparations of toadfish involve cooking of some sort, but there is no reason why you couldn’t eat the non-toxic varieties of toadfish raw. Since it’s hard to think about eating toadfish in the first place because of their looks, eating them raw might be even more of a leap. It certainly won’t hurt you to try some toadfish sashimi or ceviche, and who knows? You might just end up loving it!

Of the few known toadfish recipes, fried toadfish strips are the most popular. The fish are skinned and filleted from the backbone, giving you several strips of meat, which can then be coated in breading and deep-fried. Another way these fish are prepared is by pan-frying the meat. The fish are steamed first, which loosens the skin for easier skinning. The meat is separated from the bones and fried in a skillet with oil and lime juice.

This fish is perfect in fish tacos, on salads, in stews, or as an ingredient in jambalaya or gumbo. They add a bit of sweetness to any meal you prepare, and the flavor definitely does not seem like it could have come from such an ugly fish! Your dinner guests will be amazed at what you can do with a toadfish and will rave about how good it tastes.

While this fish can be tasty when cooked correctly, be careful when removing it from your hook. Toadfish have incredibly strong jaws that will clamp down on fingers and lock. You’ll probably have to pry the jaws open with pliers if one gets ahold of you. Fortunately, you can have the last laugh by frying it up in a pan and serving it on a plate!