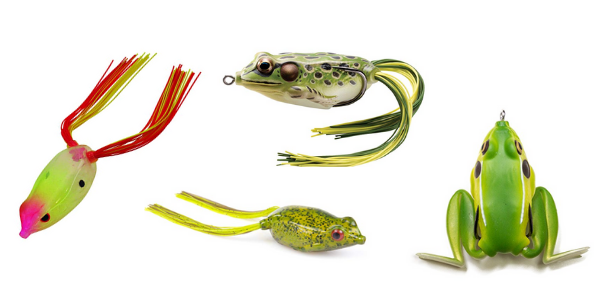 Frogs are some of the most popular lures for catching bass. Real frogs are commonly found around lakes, rivers, and streams where bass live, so they are a natural prey for bass. Frog lures aim to imitate real frogs, enticing bass into biting and helping many anglers catch more bass.

We’ve compiled the best frog lures for bass fishing, known among bass fishermen as the top products on the market. These bass frogs have realistic action for tricking bass, strong hook sets, and other attributes that make them a great choice for your next bass fishing expedition. 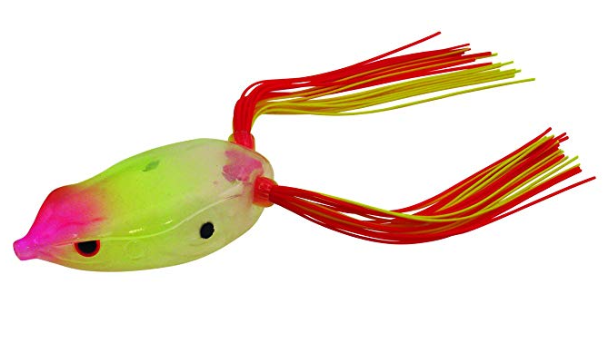 The Spro Bronzeye Frog is one of the best frog lures on the market. It can be fished in open water or under cover, and is known for attracting bass. Spro’s Frog is lightweight and hollow bodied, so it is made to cast long distances. This frog is also specifically weighted to land on its belly every time, and the line attaches at the tip of the frog’s mouth, so it stays upright to look like a real frog. 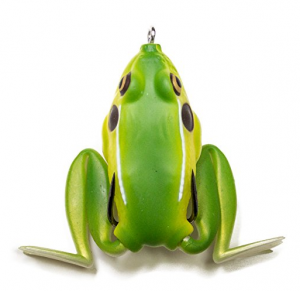 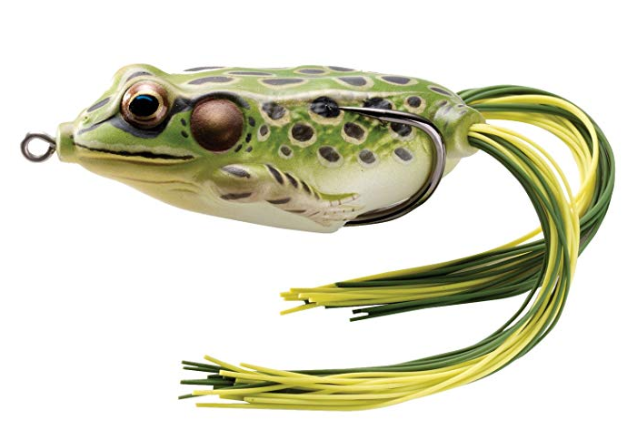 The Livetarget Hollow Body Frog attaches to fishing line at the mouth, so its movement mimics a real frog’s. It has two skirts to entice bass, and comes in 9 realistic colors and varied sizes. 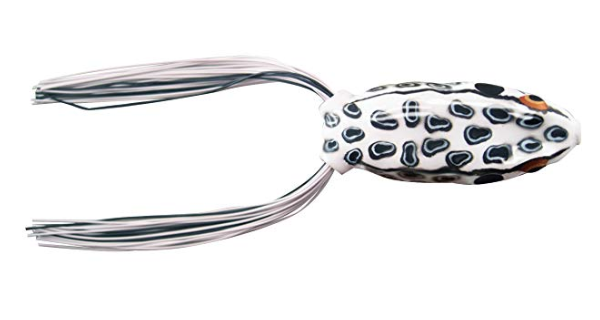 The Booyah Pad Crasher is another top-rated frog lure known for catching big bass. This frog is also soft and hollow bodied, making it perfect for casting into heavily weeded areas. The hooks are located against the body of the frog, so it won’t get caught on vegetation in the water and moves easily over both clear waters and heavily covered areas.

The Booyah Pad Crasher walks well over the water, mimicking the movement of real frogs. It has two skirts that move like frog legs, and it comes in 12 colors.

The KVD Sexy Frog from Strike King also features a rattle to further attract bass. It comes in 7 colors, made with laminated paint so that the colors stay vibrant. 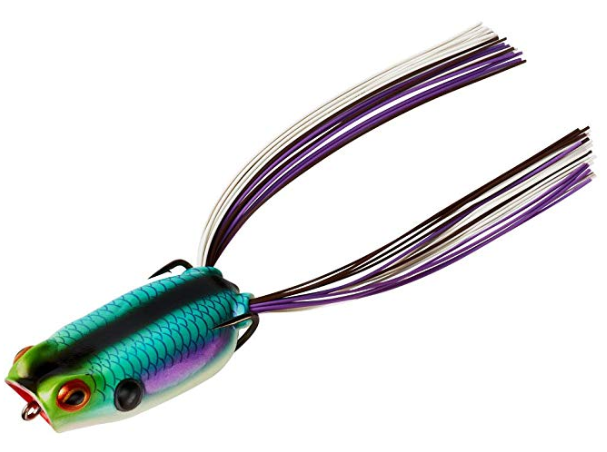 The Booyah Poppin’ Pad Crasher is similar to the other Booyah Pad Crasher, but this frog lure is also a popper. The Poppin’ Pad Crasher has a cupped mouth, but still has a soft hollow body. This means it can function as a normal frog lure over heavily weeded areas, or act as a popper, creating water disturbance to attract bass over open waters.

The Booyah Poppin’ Pad Crasher is weedless, with two sharp hooks on both sides of the frog’s body. It comes in 8 colors, each with two skirts to imitate frog legs swimming in the water. 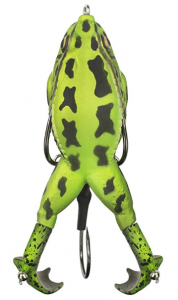 Another great frog lure from Lunkerhunt, the Lunkerhunt Prop Frog features double prop legs to kick like a real frog in water. This action helps to create more water disturbance and trick bass into biting. It has the standard two hooks on the side of the soft hollow body, but also has a trailing hook to improve the chances of a catch.

The Lunkerhunt Prop Frog is mostly weedless, although anglers have said the extra hook and legs sometimes require extra maintenance. It comes in 8 frog colors, as well as a few non-frog topwater variations.

Frog lures imitate frogs, but not all lures are the same. Aside from minor differences like color and material, different frog lures have different attributes that affect how they catch bass.

Most frog lures are topwater frogs – meaning they stay on the surface of the water, much like other topwater lures for bass like buzzbaits, poppers, and others. Topwater frogs attract bass to come to the surface and bite, and mimic real frogs hopping along the water’s surface.

Topwater frogs can come in a few different styles. The typical hollow body topwater frog is a hollow, soft plastic frog with hooks tight against the frog’s body. Most topwater, hollow body frogs are weedless, because the hooks sit so close to the body of the lure.

Another form of topwater frog is a popper frog. Much like standard poppers, frog poppers have a concave head and open mouth that takes in and pushes out water, making more of a racket along the water’s surface.

Frogs can be made of soft or hard plastic. Soft plastic, hollow body frogs tend to be lighter, although some are weighted. Hard plastic frogs are also usually light enough to float, however, especially if their body is hollow.

Check out soft plastic frogs and other soft plastics for bass to vary your lure and catch more fish.

How To Fish a Frog Lure

Frog lures are typically lightweight and easy to cast long distances. When fishing with a frog, cast far out, and slowly bring the frog back over the water. Bass will often bite on a pause, so occasionally pause on the retrieve to mimic a frog hopping along water with heavy cover.

Pay close attention as you reel in your frog, as strikes tend to be sudden and you likely won’t see the bass coming from under heavy weeds. Bass often miss, so wait to set the hook until you’re sure it has a firm grip on the lure.

Frog lures are some of the most weedless lures out there, as the hooks stay close to the body of the frog and are revealed when a bass bites down on the soft body. Because of this, frogs are generally used in areas with a lot of weeds or thick cover. Big bass tend to hide under these heavily weeded areas, so anglers tend to use a strong rod, reel, and line to fight bass caught with frog lures.

Use strong, braided line when frog fishing for bass to ensure that you can reel in the bass. We also recommend a strong, baitcasting rod and reel, as you may need extra torque to pull in a tough fighter.

Frog Lures for Bass and More

Find other bass lures, like bass jigs, buzzbaits, and more on Fishmasters! Fis