Home > Saltwater Fishing > Flounder vs Halibut – What is the Difference?

Flounder vs Halibut – What is the Difference?

Halibut and Flounder are two very popular types of flatfish in the United States. Flatfish are passive and wait on the seafloor for their food to come to them. Their skin adapts to the color of the sand, and their underside is completely white.

All flatfish are born round in shape, but flatten as they grow older and favor lying on one side over the other. One eye will migrate onto the other side of their body until both eyes are on the same side. 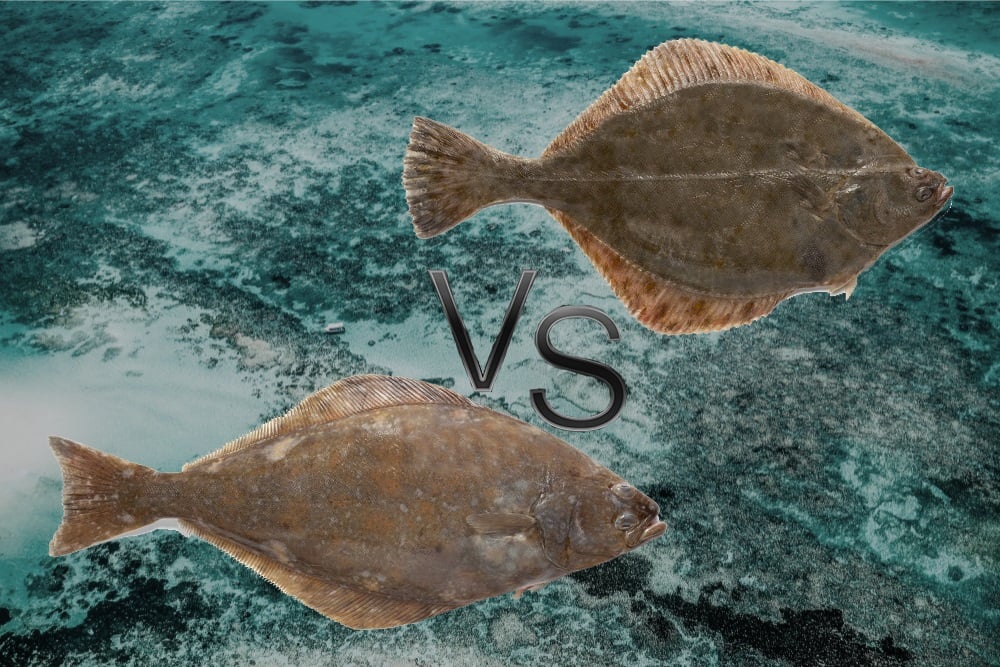 Both Halibut and Flounder are tasty and healthy to eat, lending themselves to many different recipes. They are also fun to catch, drawing keen anglers from all over the world to their native waters. These factors make Halibut and Flounder some of the nation’s favorite fish to catch and eat.

Unfortunately, both types of fish are critically overfished in the Atlantic waters, but stocks in the Pacific are managed more sustainably.

Confusingly, the term ‘Flounder’ encompasses the whole flatfish family of fish species which includes plaice, sole, turbot and halibut. There are some species of fish, like the Californian Halibut, which are referred to as halibut but are a different kind of fish altogether.

For the purpose of this article, we will use the terms Flounder and Halibut as they are referred to in common conversation amongst foodies and fisherman alike.

If you want to find out more about these fish, how to tell them apart, and where to find them, then keep reading!

As Halibut and Flounders are both flatfish they have similar appearances and it can be difficult to tell them apart. They are both mottled green or brown in color. Halibut have smaller scales, whereas Flounder have thicker scales that are more obvious to spot.

The most obvious difference between them is their size. Halibut are larger than Flounder when fully grown, and are actually the largest kind of flatfish. They can reach up to 8 feet long and weigh several hundred pounds.

Flounder rarely reach more than 30 pounds. Using size to differentiate between them is only applicable when they are fully grown, as they are similar in size as juveniles.

Their tails are also different. Flounder have round tails, whereas Halibut have pointed tails with a slight fork at the end.

As we explained earlier, one eye will migrate until both eyes are on the same side of the body. Halibut can be identified by both eyes being on the right side- it is very rare to find a halibut with both eyes on the left. Flounder vary, as it depends on which side the individual fish favours to lie on.

Halibut have large mouths. Their cone-shaped teeth are tucked into their mouth. Flounder have smaller mouths with more protruding teeth.

Where To Find Them:

Halibut are found off the Northern coasts of America, in both Atlantic and Pacific waters. They play a big part in Alaskan culture especially. Halibut also live in the sea off the more central states, especially the Western coast, where they cohabit with Flounder.

Flounder prefer the Atlantic and Pacific waters off the Southern states and are found along both the East and West coasts. They prefer the warmer waters but live alongside Halibut in the waters off the central coastal states.

Flounder and Halibut are similar so you can use the same methods to catch them. That being said, halibut will put up more of a fight once they have taken the bait, so be prepared for a challenge! But once you have reeled them in, it will be worth the effort, as their size is so impressive.

Halibut and Flounder can be caught whilst surf-fishing. A circle hook is preferable to a J hook as they bite slowly. Both fish are bottom feeders, so a lead weight will be needed to keep the hook near the seafloor.

They are not fussy eaters, but shrimp make the best bait. As Halibut are larger, they can eat larger prey. They will feast on anything smaller than them, like other fish, crustaceans, and even smaller halibut.

Flounder and Halibut are very similar and are both part of the flatfish family, so it’s not surprising that they have a similar taste. They are both considered ‘superfoods’ as they are rich in important micronutrients such as selenium, niacin, magnesium, phosphorus, and vitamins B12 and B6.

Both Halibut and Flounder are high in protein and contain lots of healthy Omega-3 fatty acids to improve your heart health.

Halibut has a firmer, meatier texture which makes it ideal for grilling as it will not fall apart. It also makes it a popular choice as a meat substitute or replacement. It earned the name ‘holy flatfish’ as it was commonly eaten by Catholics on holy days when meat was forbidden.

It is also incredibly low in fat so is a great choice for healthy eating.

Flounder is much more delicate with a flaky texture, making it suitable for baking or gently pan-frying. It has a higher fat content than Halibut, but this also makes it very flavoursome.

When choosing which one to eat, the most important thing to consider is how fresh the fish is. Both fish will be readily available in many states, but it is best to choose the fish that is freshly caught in the particular area you are in.

As you can see, there are many similarities between Halibut and Flounder. But there are also some important differences such as their size and where they can be found. But which is better?

Halibut are large fish which present a fun challenge even to experienced anglers. Their firm, meaty texture makes them a popular choice in the kitchen too! They are low in fat and high in many important nutrients. So arguably, Halibut are a superior choice of fish.