10 Types of Flatfish to Catch in the Ocean

The confusion between different types of flatfish can make you feel like you’re wading through muddy waters. They all look somewhat similar, and to some, they taste the same too. But there is an ocean of difference in these pancake platters. You just need to know what you’re looking for. 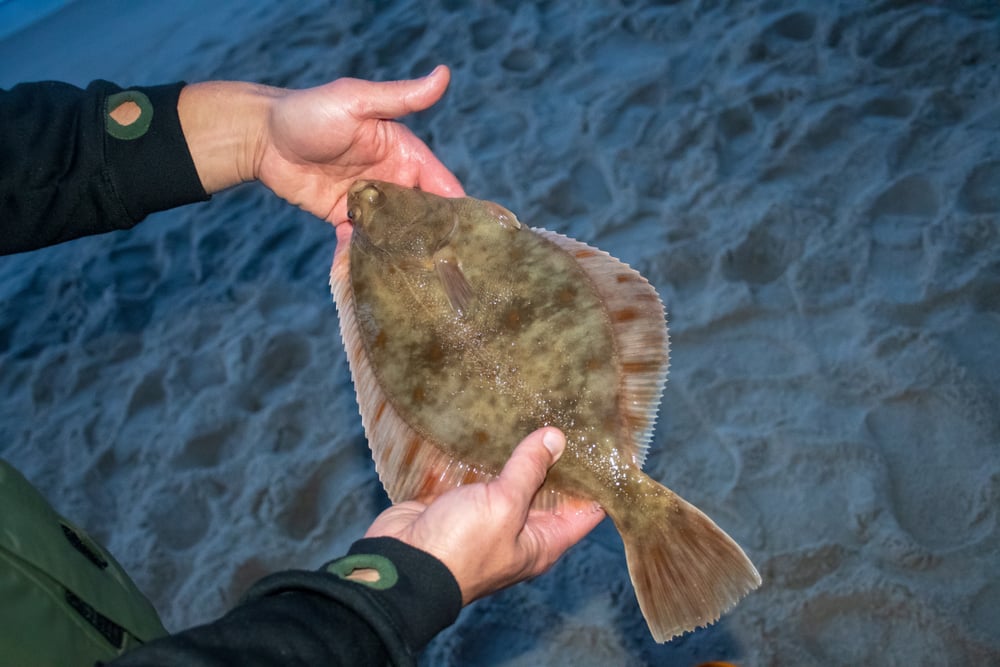 There are over 822 known species of flatfish worldwide, but the same 11 show up on your dinner plates, and most people can’t even name them. Give yourself a little test, and try and think of the 10 flatfish I’m about to talk about. Go on! Beat the majority!

Today we are going to float through those 10 different flatfish, so you know exactly what you’re eating.

You can find these fish in North American and British waters, and each subspecies looks and acts a little different. Check it out! 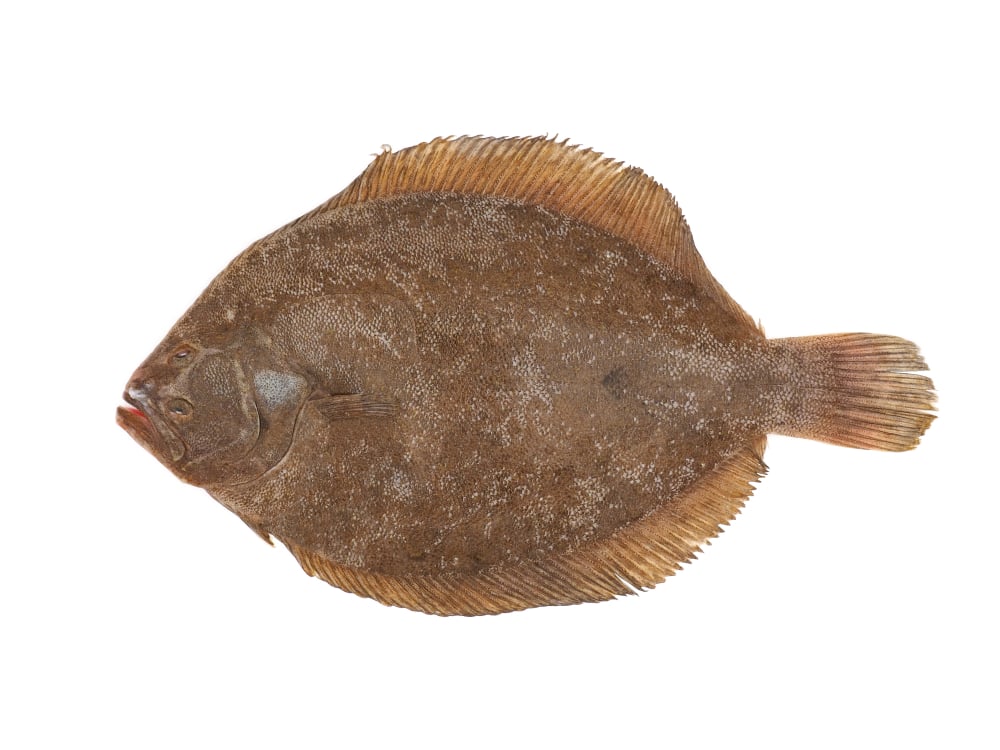 Even though Brill is mainly found in the Atlantic, Black Sea, Baltic Sea, and Mediterranean sea, the British often find it on their plate. They have slender brown bodies with white and black specks to help them stay camouflaged. The unusual thing about the Brill fish is that it has a creamy pinkish white underbelly.

Brill often gets confused for turbot, but a good way to tell them apart is their shape. Turbots are more diamond-shaped, whereas Brills aren’t as wide. Check out the picture below to compare them. 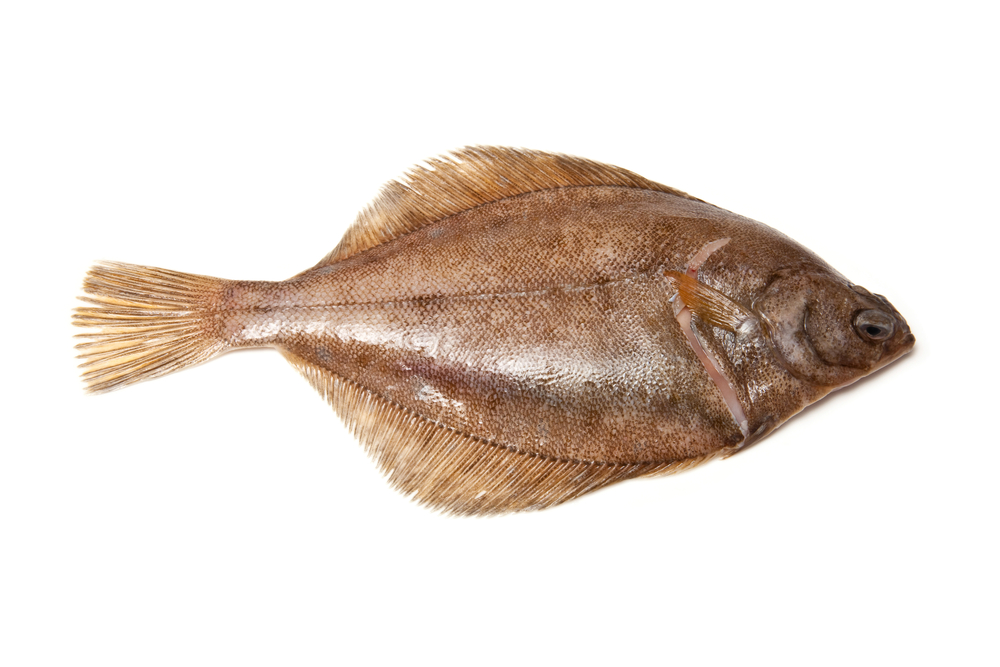 The Dab is a common fish found in Northern Europe and the North Sea. Dabs often get confused for plaice and flounder because they are found in similar regions and have the same pale brown color.

But as we said before, flatfish bury themselves into the sand of the seabed they live by. So as they all come from a similar area, it’s not unsurprising that they look a little similar.

The way to tell if your fish is a Dab is by checking out its specks and lifting the body out of the water. If the blotches are dark without a touch of orange, and the body is somewhat translucent, then you have found yourself a Dab. 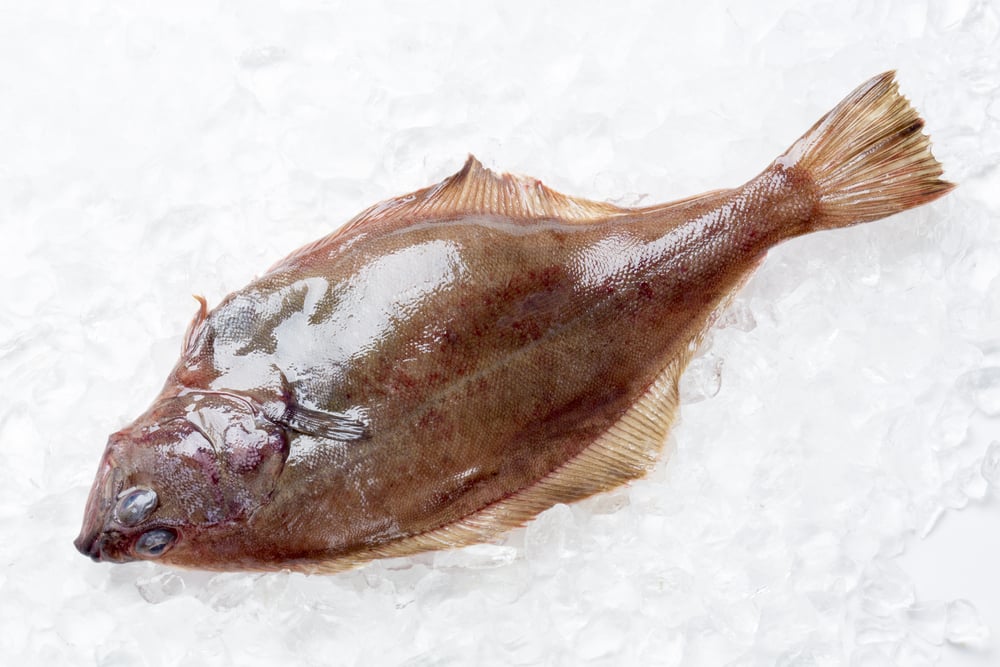 Most American’s call any flatfish a flounder or a fluke, and the word is so synonymous now that it’s wrong to say they are incorrect. But let’s look at a real Flounder.

In North America, there are hundreds of subspecies of flounders. You may have come across the Summer Flounder, the Winter Flounder, the Southern Flounder, or even the fun named Starry Flounder.

In Britain, there is only one Flounder, the European Flounder. These fish are a common target for commercial fisheries as well as casual anglers, but that hasn’t reduced their numbers.

Their numbers are as high as ever, which is why most fish shops offer them as a sustainable alternative to cod.

Halibuts are the most giant flatfish you can catch, reaching lengths of 8 feet and weights of hundreds and hundreds of pounds. This fish is unreal!

Their name comes from the word “Haly ” which means holy, and “butte” which means flatfish, creating a popular sacred fish on catholic holidays.

Catching Halibuts are often a source of sport for anglers in the race to get the biggest fish they can.

This has led to one of the two sub-species to be labeled as endangered. The two species are Atlantic and Pacific, with the Atlantic sub-species being the one most at risk. The endangered label was given in 1996 and hasn’t changed since.

The IUCN (International Union for Conservation of Nature) recognizes that an update is needed, but so far, we don’t know if their population has grown or shrunken.

The Megrim is an ugly fish, so ugly in fact that The Independent (A British Newspaper) even said it was “a fish that only a mother could love”. 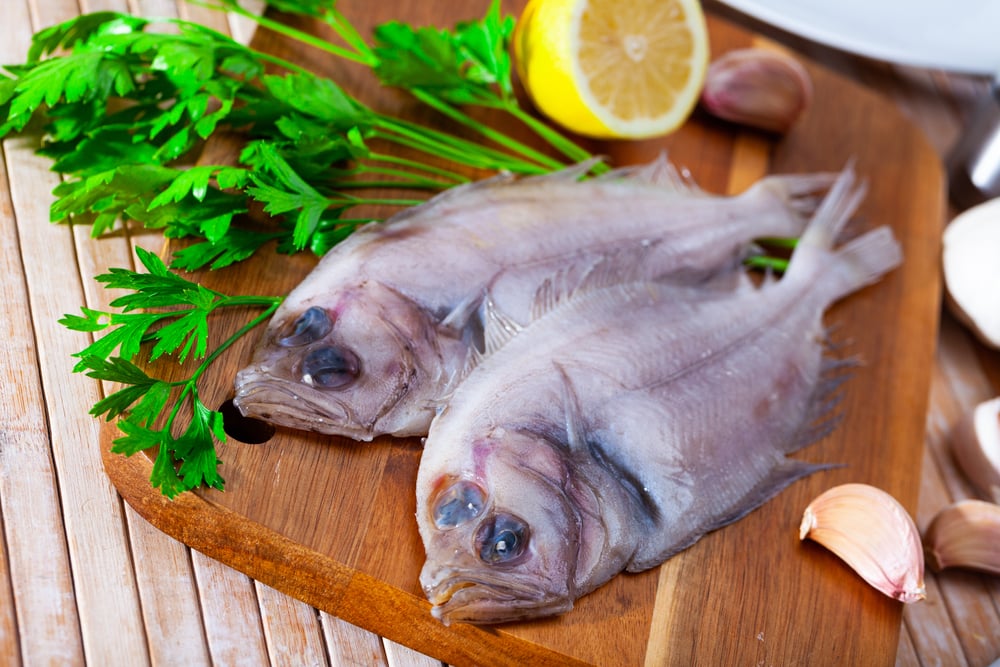 This ugly duckling might not be the prize at the market, but it is a cheap, tasty, and sustainable fish that many fish sellers are trying to make people more aware of.

Megrims can grow up to 24 inches, and their heads are slightly more prominent than other flatfishes. The most popular place to find Megrim is in the deep dark waters of Iceland or the west of Ireland. This is because you can find these fish spawning away from their natural predators of sharks and seals.

If you’re American, then the Plaice at your dinner table will most likely be caught from Labrador in Canada unless you live on the North Pacific coast. Being North Pacific, you’ll be closer to the smaller fisheries of Alaska, so your plaice likely comes from there. 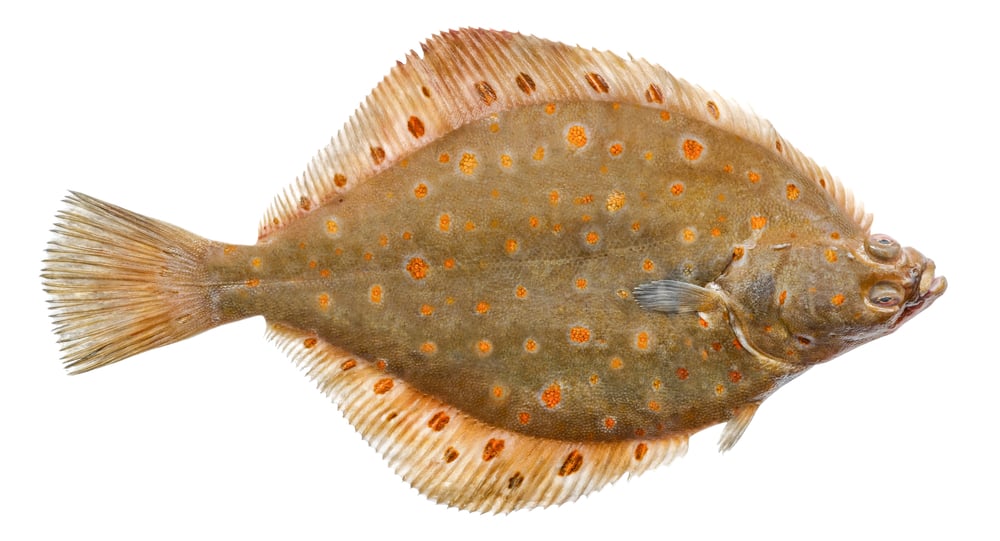 Plaice is a popular British Flatfish, and you can find them in most fish shops. They are found all over Europe and the Americas, specifically Alaska. There are four types of Plaice: European plaice, American Place, Alaska Plaice, and Scale-Eye Plaice, but American and European are the most common.

Due to their popularity, European Plaice was considered to be overfished in the 70s and 80s and were on the IUCN’s watch list. But now, due to controlled fishing, their numbers are increasing.

That hasn’t stopped the Brits from having the Plaice as one of their top fishes, though, so we wouldn’t be surprised if the numbers go down again.

Sanddabs, just to confuse you, are not the same as the Dabs we were talking about before. Sanddabs are a light brown color, but they tend to have white spots. 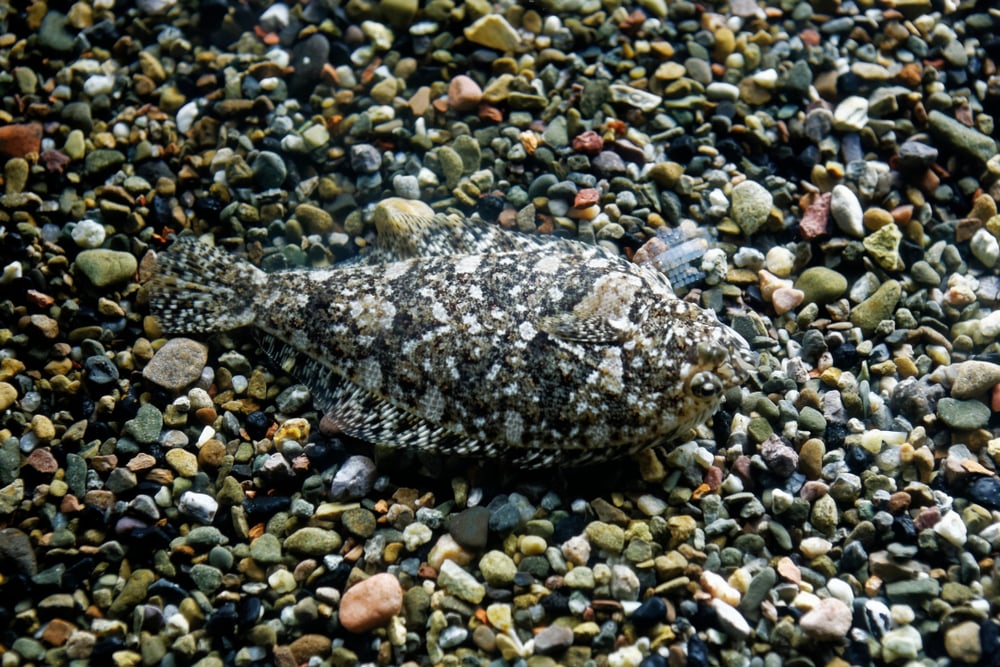 You can find Sanddabs in the Northern Pacific Ocean, the Sea of Japan,  and the coast of California.

Sand Dabs are typically found in 160 ft to 490 ft deep oceans, but their young can be found in shallow waters until they are ready to venture out into the world. You might even find them hooked into tide pools, separated from their school.

America likes to call a lot of Flatfish “Sole” when they are actually Flounders. If you are ever presented with a genuine Sole, it’s probably a Dover Sole. 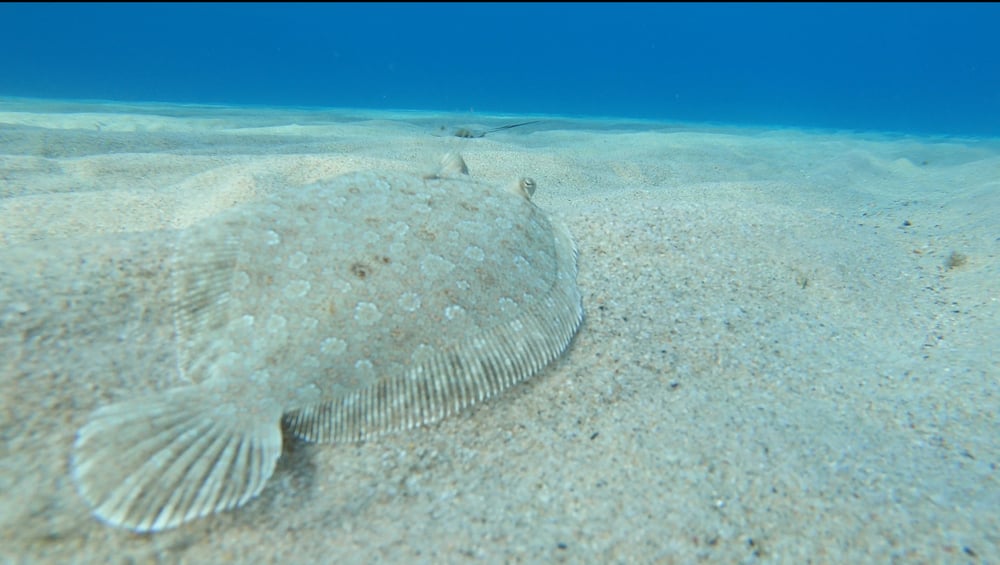 Sole, just like Plaice, is considered to be “outside safe biological limits” by the ICES (International Council for the Exploration of the Sea). Still, it hasn’t been labeled as endangered by the IUCN yet.

In Britain, you’ll find that there are Dover Soles and Lemon Soles, neither of which are the same as the American Soles with the same name. Its name irregularities like these which causes confusion for anglers and non-anglers alike.

Sole is probably the easiest to recognize after Plaice. It is small, long, and plain with tiny heads.

Toungefish are often ignored due to their tiny size and their tropical locations. 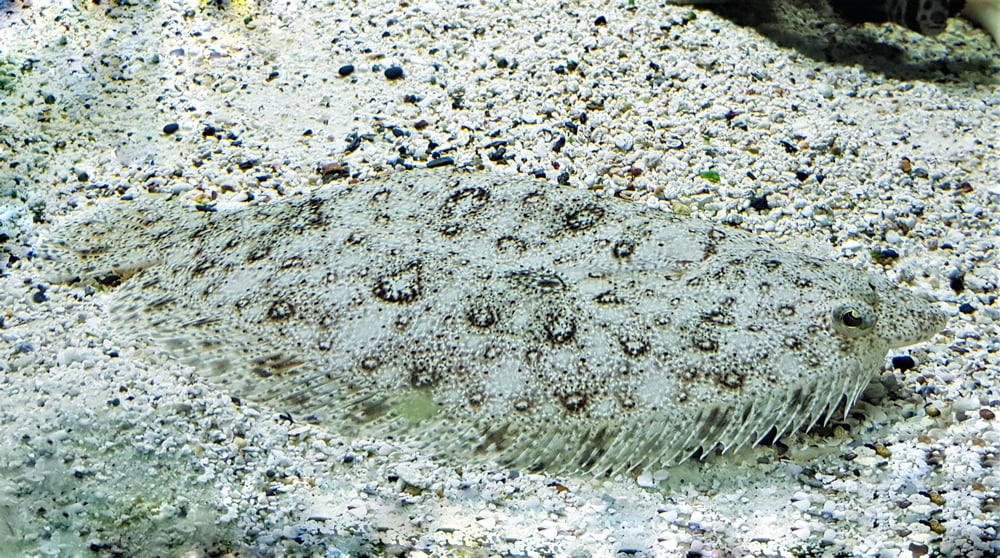 Found in subtropical oceans and shallow waters, Toungefish is the only flatfish known to survive near hydrothermal vents. These vents are pockets of heated water found near active volcanoes.

For some reason, Tonguefish not only survive near this boiling hot, molten sulfur landscape, but they also thrive!

Most people consider the Turbot to be the tastiest flatfish, which is why they are often the most expensive. Being so delicious means that commercial fishers are hunting these moneymakers to death. 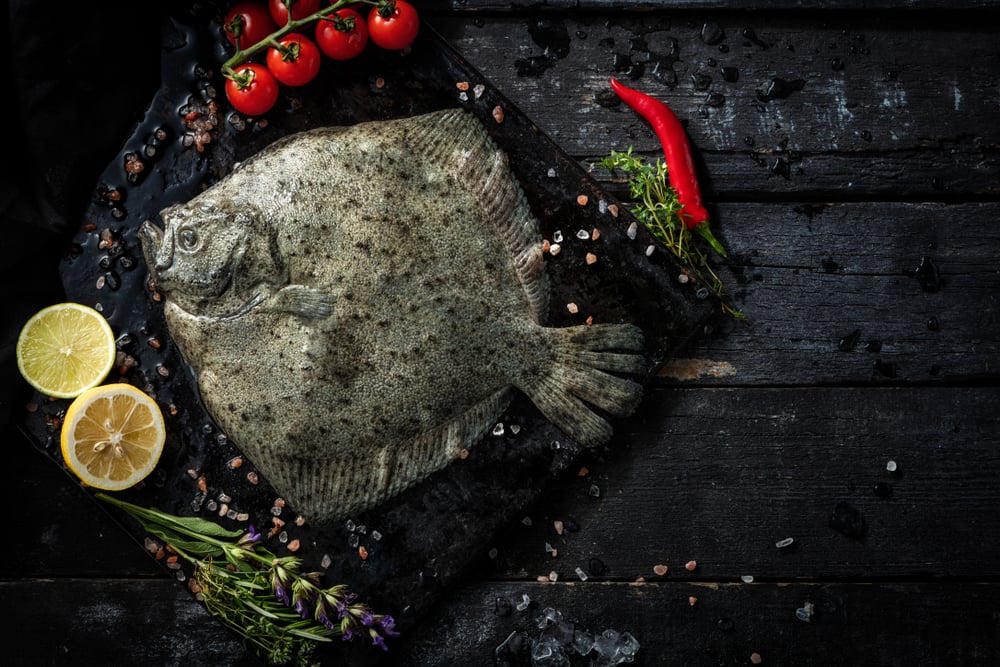 Most people consider the Turbot to be the tastiest flatfish, which is why they are often the most expensive. Being so delicious means that commercial fishers are hunting these moneymakers to death.

Turbots are currently considered to be vulnerable and are on the IUCN’s red list. Their research was last assessed in 2013, and it proved that the population is decreasing.

Although in scientific timescales, that research wasn’t too long ago, in environmental timescales, the IUCN should reassess our favorite flatfish to make sure we can keep eating them in the decades to come.

A Flatfish is more of a catch-all term rather than a scientific term. The official name is “Pleuronectiformes” or “Heterosomata”. There are over 822 species of Heterosomata, including the 10 below.

Flatfish are stealthy fish that lie flat on the seafloor with sand covering their body. They wait for their prey to land near them, and that’s when they pounce. With detailed and faint-colored skin, flatfish are often perfectly matched to their environment, making them seem invisible to the untrained eye.

The fact that they can lie flat on the seafloor but still have both eyes facing their prey is the flatfish’s most significant advantage. The fish aren’t born with this shape. They are born round like any other fish, and as they grow and prepare themselves to hunt their prey, their body begins to flatten.

You may have noticed that one of the fish’s eyes seems comically out of place, as if Tom or Jerry has pushed the eye upwards, and biology just said, “That’ll do”. The odd-looking eye that you can easily point out, is the one that had moved.

You might have already scrolled down to our list of flatfish and wonder why Monkfish or Skates haven’t been included. That’s because of the eye advantage. The fish below have all evolved to have the benefit of two eyes on one side, whereas other fish like Rays just happen to be flat.

There is more to a flatfish than just being flat.