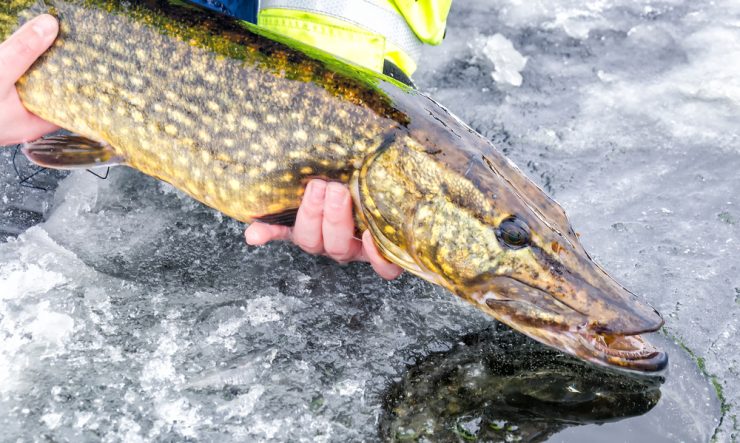 The lakes are frozen, the holes are dug, the lines are dropped, and the cold air continues to flow in from the north. Your quest for pike has just begun. Ice fishing for pike is an all-time classic activity to do in the winter.

The fish are always biting, as long as you follow some simple tricks and tips. Make the most of your next ice fishing trip with these pike fishing tips.

Pike are one of the largest and most exciting fish to target while ice fishing. Northern pike are big – you might pull out a fish as big as 40 inches long. Learn how to target pike while ice fishing so you can make a trophy sized catch this winter!

Just like real estate, the most important aspect of ice fishing is the location. If you know where the fish are most likely to be, the chances of you catching some are much higher.

Pike love to be near vegetation. Any time you can find an area with underwater vegetation, fallen trees that have been frozen over, or underwater sand bars, you’ll probably find a bunch of Northern pike.

They also like to roam the waters in patterns, so if you can figure their pattern out and set your lines up on that pattern, you’ll be swimming in pike later on in the day!

As mentioned before, pike tends to roam waters in patterns, as well as nearby areas of vegetation. Since they are prone to this, the patterns you set up your holes on the ice is really important. The season also needs to be taken into consideration. Pike act differently depending on how thick the ice is and how late into the season we are.

For the early ice and start of the season, set you a bunch of tip-ups along key break lines. When it’s mid-season and the ice is an average amount of thickness, try finding a small structure like large rocks or sand bars underwater and set up some traps around it. It’s almost guaranteed you’ll find some massive pike.

When the ice is thickest and the season is at it’s coldest point, you want to set up a diamond pattern. Four holes, 60 yards apart, and a sing hole in the middle. If you’re confused, just imagine a standard baseball infield. Use noisy lures on the outer holes to attract the fish, and you’ll be catching pike that originally started miles away from you.

We vaguely mentioned this earlier, but depending on the season, the pike acts differently. The thickness of the ice, amount of sunlight being able to reach the water, the amount of food available, and many other factors are taken into consideration by pike and how they move throughout the water.

In the early part of the season when the ice is thinnest, we recommend staying in the shallow water. Early season means thinner ice, thinner ice means plankton, more plankton means more small fish, more small fish means more pike. They might be swimming deeper in the water, so let the line loose a little bit, but setting up a few feet off the water’s edge would be your best bet.

As the season progresses and the ice thickens, the deeper the pike swim. Try and find the deepest parts of the lake or river, and drop the lines far down the holes there. Pike, especially the larger ones, don’t like to be bothered. Try and find deep areas that don’t seem overcrowded with other fishermen. This is when your patience is tested. Stay strong and hold your ground. Set the jigs deep and you’ll be successful.

The later the season, the more unpredictable the pike get. It really depends on how the ice itself is melting. If the ice tends to thin out quicker, then go back to your early season strategy and hit the shallow weeded edges. Northern pike move to shallow waters at the end of the season to spawn. If it’s still relatively thick, stay in the deeper parts.

Spread out the options though. Set up a few holes in shallow waters and deep waters and test which ones are more active. Don’t put all your eggs in one basket as the season withers away.

When ice fishing for pike, you want to have as many lines in the water as possible. Like we said, with pike, they tend to roam in patterns until they find bait, and once they do they’re pretty predictable.

The best way to catch the most pike possible is to spread out around an area, and have as many lines in the water as possible. You can also use an assortment of pike lures and the best ice fishing lures and baits. We recommend either using the tip-up system or the dead baiting system.

Tip ups hold your line and alert you when there’s a nibble. The dead baiting system is when a stationary line is attached to a collum or pole. The bait doesn’t move in the water making it unassuming and an easy target for fish. Keep the bait in the water, and the fish coming through with either one of these systems.

Use the Right Line

Northern pike are known for their scary sharp teeth. Those teeth can cut your line, resulting in lost tackle and a lost catch. To prevent this, always use strong ice fishing lines and set up your rig to avoid line cutting.

A heavy braided line is a strong choice when fishing for pike. Use 30 pound test strength or higher. In extra clear conditions, use a strong fluorocarbon line or leader so that the pike aren’t spooked by a visible line.

Final Thoughts on Ice Fishing For Pike: Tips and Tricks

Ice fishing for pike really isn’t as simple as just putting a line in the water and hoping to catch something. You really need to understand the patterns in which they hunt and swim, their reactions to the ice and season, and also your own patience. Follow these tips and we promise you’ll catch schools of fish every season!

Learn how to catch crappie, walleye, and perch through the ice as well!