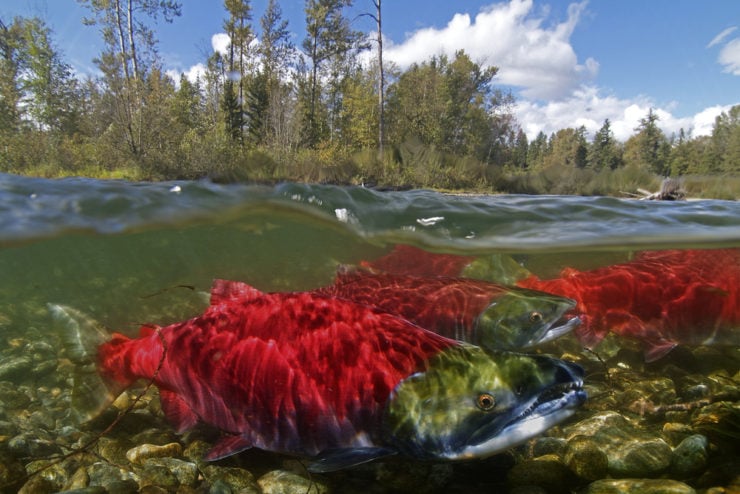 The sockeye salmon is a smaller Pacific salmon species, typically measuring between 18-31 inches in length while weighing 5-15 pounds. Sockeye salmon are an anadromous species located in the Northern Pacific Ocean. Its lifespan can span anywhere between 3-7 years, but they serve as a crucial component to Alaska’s economic salmon species.

Sockeye salmon present a healthy seafood choice, given its responsible harvesting and management under U.S. regulations. Among the Pacific Salmon species, they are the 3rd most common choice. The most beneficial populations are located in Alaska because mortality and human-caused habitat loss are common in the lower 48 states.

Sockeye salmon are identified as smaller fish among the Pacific Salmon, typically measuring between 1.5-2.5 feet in length. These salmon will show themselves by their flashy silver flanks and white belly.

Because of its color, the sockeye salmon is occasionally referred to as a blueback or red salmon. It contains a white belly, metallic blue-green top side, and silver flanks. Sockeye salmon are a sought-after catch because of their bright-orange, firmer flesh. When sockeye salmon return up the river to spawn, their bodies will transform into a vibrant red. Their heads will showcase a green color, as well. 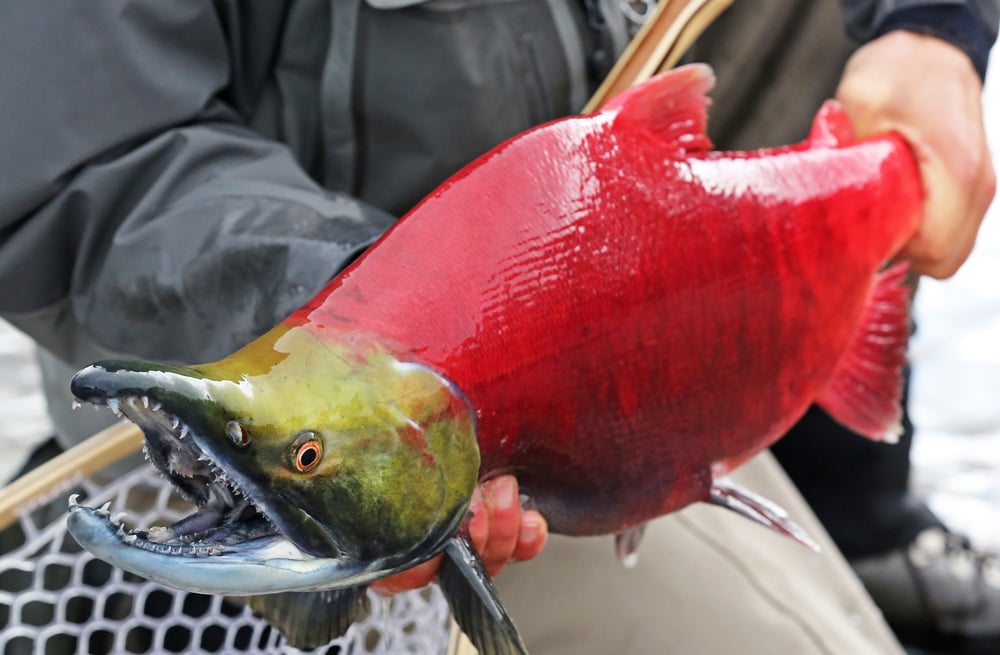 The Sockeye salmon is the third most common species of Pacific salmon, trailing Chum, and Pink salmon. Its name Oncorhynchus derives from the Greek words “barb” and “snout.” The “sockeye” name comes from the indigenous language, meaning “red fish.”

The world record for Sockeye salmon measured over 16 pounds. Mr. Stan Roach accomplished this feat in one of the more famous salmon fishing locations in the world. It was caught in the Kenai River, which contains over one million Sockeye salmon per year. It was a remarkable catch because the average weight of Sockeye in this region is 8-12 pounds. 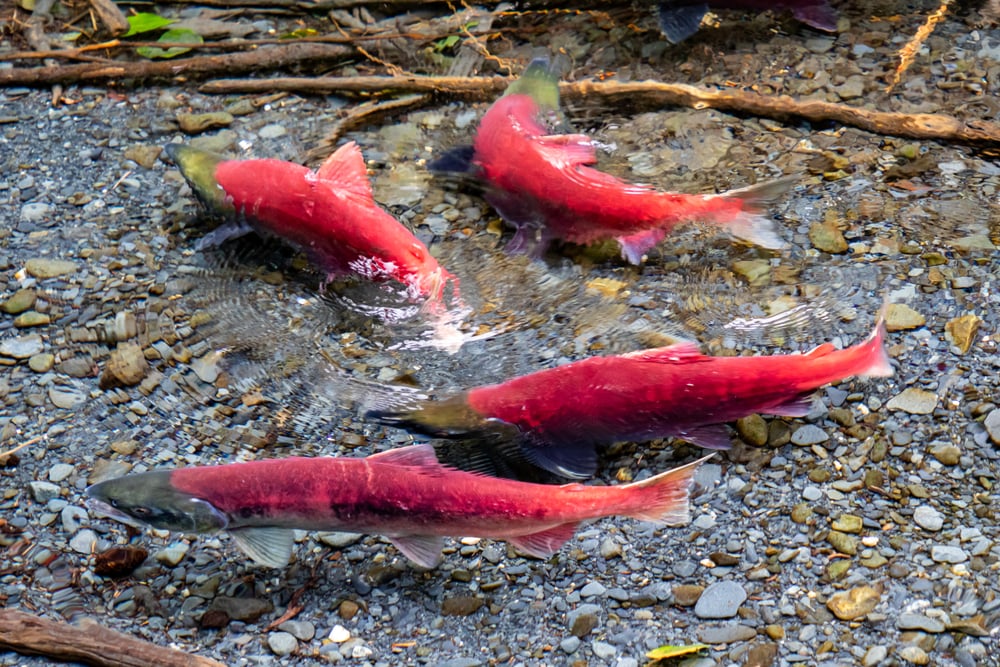 The spawning process for Sockeye salmon usually takes place between June and July. This process occurs in streams, upwelling spaces along beaches and lakes, as well as various rivers. Spawning typically yields anywhere between 2000-5000 eggs, which are laid in 1-3 nests. Females will dig their tails over a few days to create this space. Both females and males will die within a couple of days after spawning.

During the colder winter months, the eggs hatch, and the newly born “alevins” will rest in the gravel and survive off the yolk sacs. When the spring comes around, they will arise from the gravel and move to larger areas as an individual “fry.” In lake areas, the juveniles will live for 1-3 years in the freshwater, surviving off smaller crustaceans and zooplankton.

Once they are healthy and mature enough, the Sockeye salmon will migrate to the ocean during the spring as “smolts.” In areas without lakes, the newly born hatchlings will slowly make their way straight to the ocean. Smolts weigh a couple of ounces when they arrive in the saltwater habitat, but they mature quickly in the first three years as they feed on the insects, plankton, and small fish.

Throughout their lifespans, Sockeye salmon typically travel 2000-3000 miles, maneuvering in the counterclockwise Alaskan current in the gulf. Eventually, they will go back home to the exact freshwater location in which they were born. 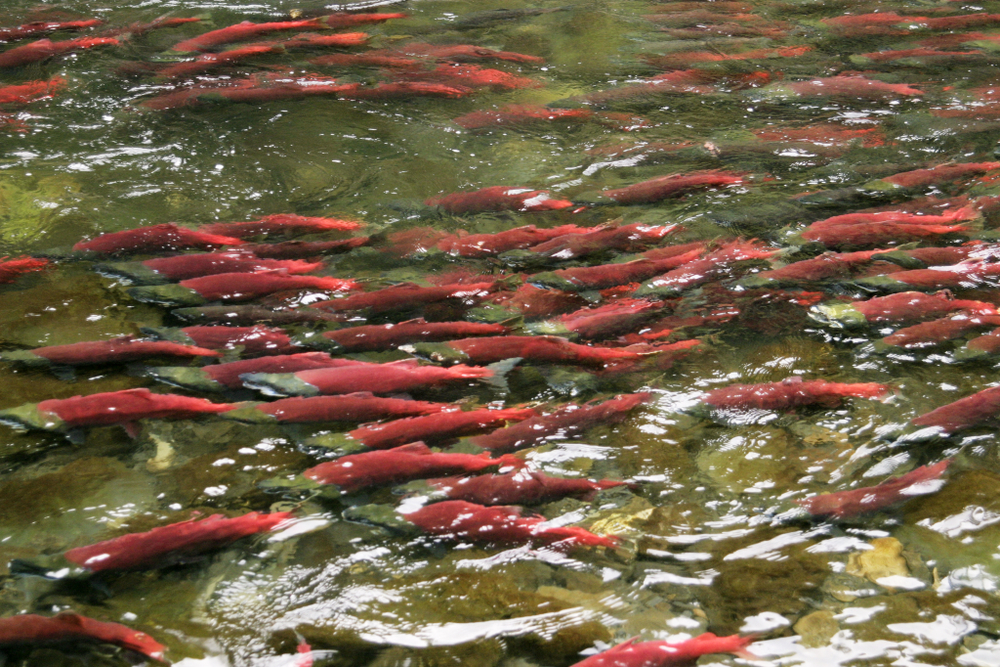 The optimal habitat for Sockeye salmon includes streams, lakes, and estuaries because of the spawning opportunities. You will find Sockeye salmon southernmost in the Columbia River, located in the eastern Pacific. In the northern parts of Japan in the western pacific, you can also catch fish on Hokkaido Island.

Their most notable habitat is along North America’s west coast. You will find schools of Sockeye salmon from Oregon’s Klamath River to northwest Alaska at Pointe Hope. The most significant populations are in rivers like the Ugashik, Kvichak, Naknek, and Egegik.

Sockeye salmon are mindful of their eating habits because they always ensure that they get the minimum necessary food to survive. For both the saltwater and freshwater life stages, Sockeye will focus on zooplankton. They will also venture to eat smaller aquatic creatures. During their juvenile years, this species will ordinarily incorporate shrimp and krill into their diet.

However, the salmon habitat and population remain healthy in Alaska. There are hundreds of unique Sockeye salmon stocks, and the population graphs are abundant. Possible future threats consist of habitat degradation, climate change, overfishing, and habitat loss.

Although these salmon travel in huge numbers, they pose a challenge in their consistent reluctance to subdue a lure. Because of this resistance, you want a small and straightforward presentation. Surprisingly enough, a bare hook is an effective strategy. Some fishermen will utilize a tiny float or small piece of colored yarn, but you want to keep it straightforward.

The ideal place to catch the Sockeye salmon is water between 2.5-5 feet deep, within a quicker current. As you cast the line, you ideally want the fly to trail the weight by 2-4 feet.

Sockeye salmon are a delicate cooking option because of its firm consistency. Due to its complex seasoning and flavor, Sockeye is not the ideal fish candidate to mix with multiple sauces. It would be best to place it on the grill with the flesh-side downwards if utilizing an open fire. When cooking on a cedar plank, you can put it skin-side downwards. Pair the Sockeye with lemon, salt, pepper, and olive oil for the best flavor. 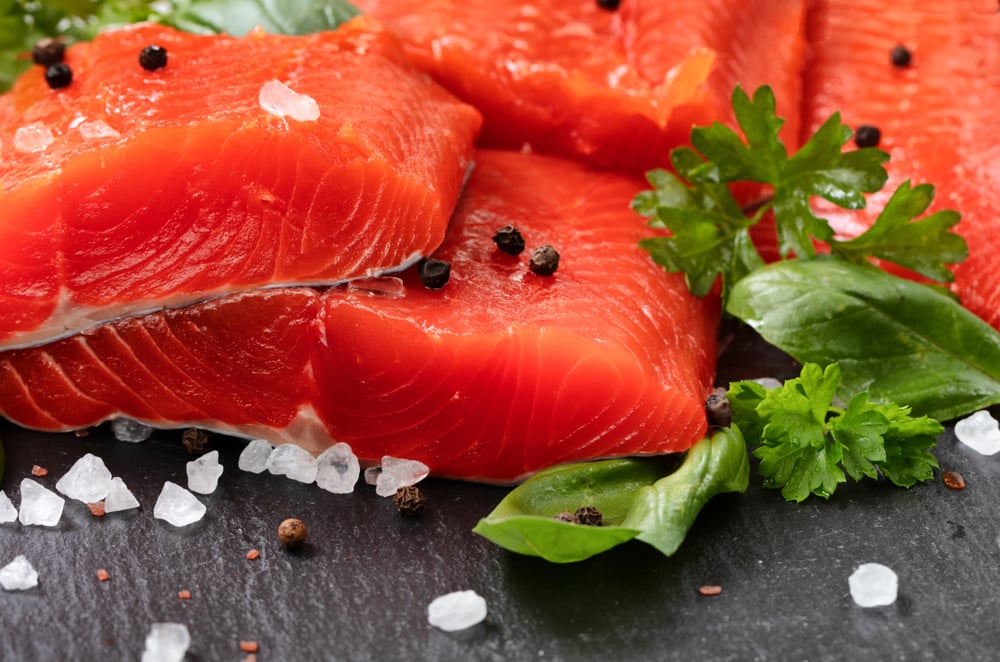