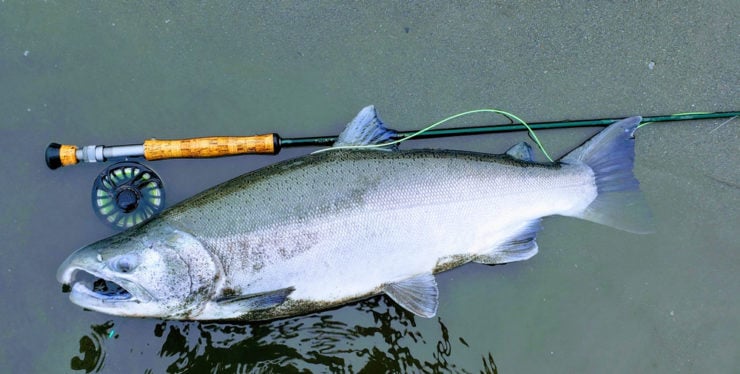 One of the five Pacific salmon species, Coho Salmon, is the most popular sport fish in the Pacific Northwest region. Historically, like many other Pacific salmon types, Coho has been a staple of the native people.

It once provided a substantial portion of the dietary and trade needs of indigenous people. And today, government officials work closely with tribal leaders to responsibly manage the Coho populations.

Coho Salmon are also known as “silver salmon,” characterized by typical silversides, dark metallic backs, and lighter bellies. The appearance of Coho Salmon changes during each life stage and habitat.

Coho average 8-12 pounds, making them an ideal size for both sport and commercial fishing. In fact, Coho is one of the most popular sport fish in the Pacific Northwest. Unlike Chinook, these salmon have lighter gums that are almost white in color. 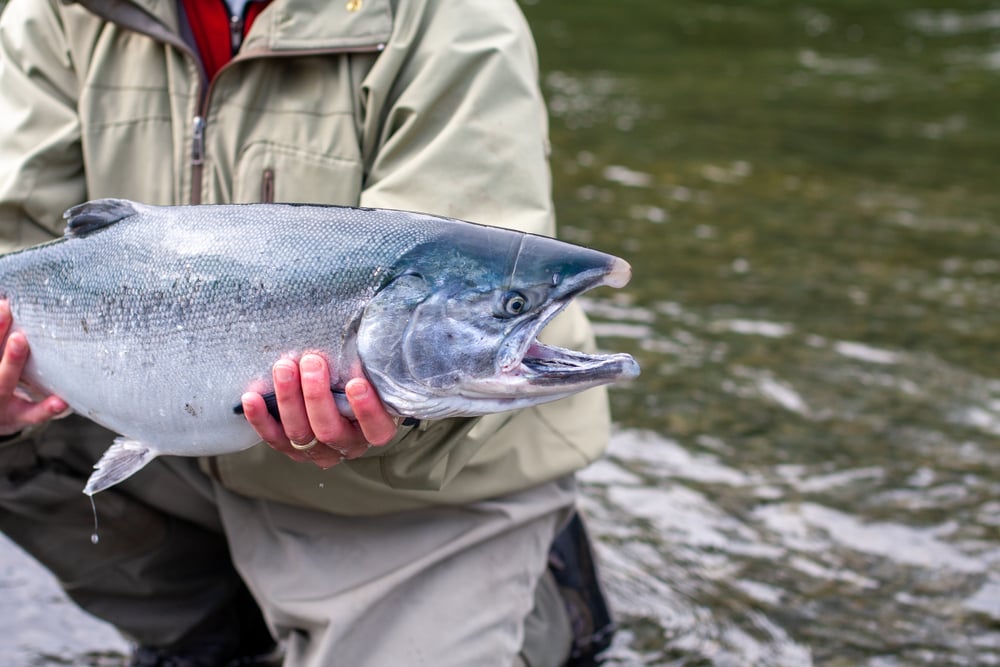 How to Identify Coho Salmon

Coho are also called Silver Salmon due to the light silver metallic coloring of their skin.  This helps identify them compared to other salmon like Chinook or Sockeye.

Ocean-dwelling Coho has small black spots on their back and upper tail. Any coloring on the dorsal side will be a dark blue-green metallic and their sides silver. Freshwater Coho has a red coloration on the sides instead of silver, primarily when spawning.

Spawning males also have enlarged, hooked teeth. Juvenile Coho in freshwater has a camouflage pattern of striping and spots. As they migrate to the ocean, this camouflaging disappears, and they develop the traditional dark back and light belly coloring.

Coho Salmon are modest in size, averaging between 8-12 pounds when fully grown. However, there are always extremes on both ends of that range. The world record for the largest Coho was hooked in 1989 at 33 pounds, 4 ounces on the official scale. 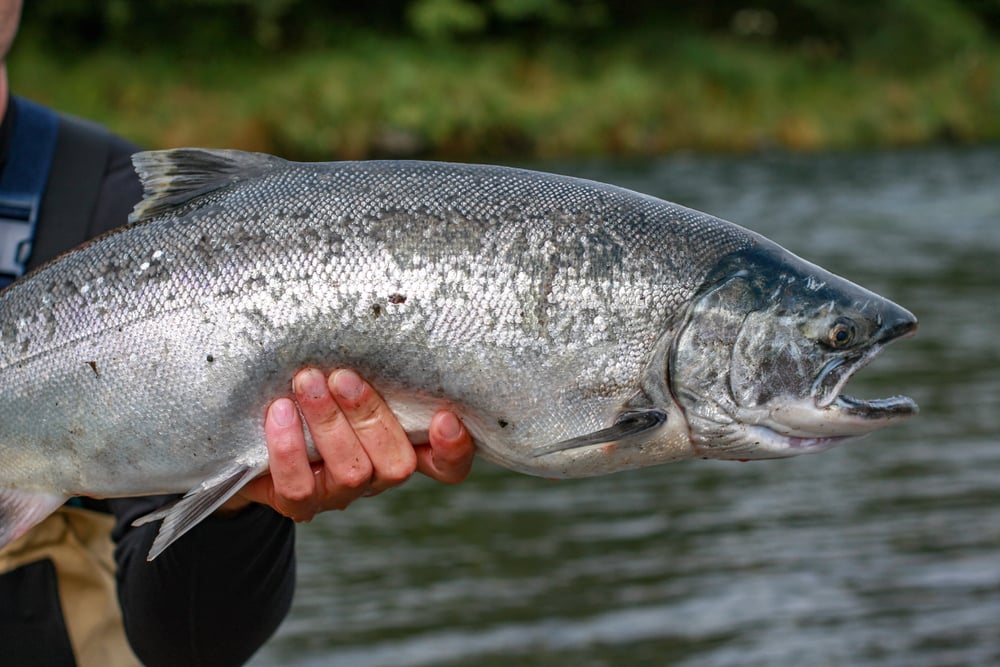 Coho salmon have been a long-standing staple for the sustenance and commerce of indigenous people. Even today, tribal governments are heavily involved in the coho fishing industry. While Coho Salmon has been slower to gain commercial popularity due to their smaller size, they have been gaining.

In the 1960s, Coho Salmon was not a popular commercial fish. However, by 1994 one of Alaska’s Alaska’s largest commercial fishing operations noticed the untapped potential and added Coho to their regular lineup. Ocean-caught Coho is desirable table fare, and while it won’t stretch as far as the king salmon, it still makes a pretty tasty meal.

Today Coho Salmon populations are well-managed in the Pacific Northwest, with only one subspecies landing on the endangered list. These highly adaptable fish are successfully inhabiting other freshwater sources like lakes and tributaries outside of the Pacific Northwest region. 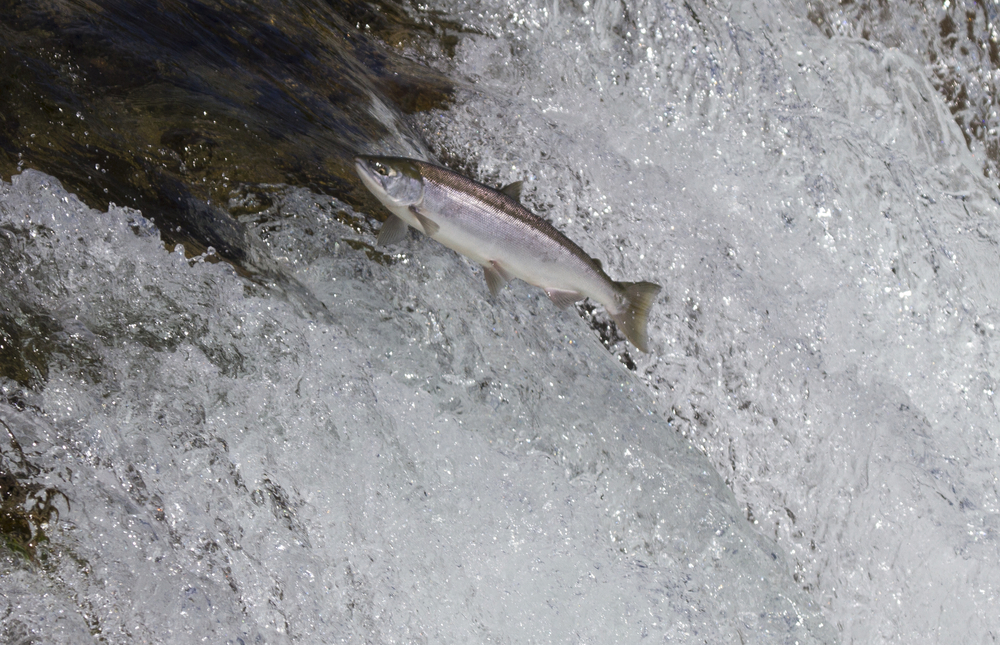 Coho Salmon eggs incubate for a period of six or seven weeks. Newly hatched larvae will remain in the rock bed feeding on plankton until the sac is absorbed. Young Coho Salmon feed on a combination of plankton and small insects in freshwater. Once they are large enough, Coho Salmon migrate to the ocean to feed and grow for about 1 ½ years.

Coho returns to freshwater streams in the fall or early winter to spawn. The female Coho will dig a nest in the rock bed, spawn and then die. The dead fish’s carcass is absorbed into the marine ecosystem, providing essential nutrients to newly hatched fish. 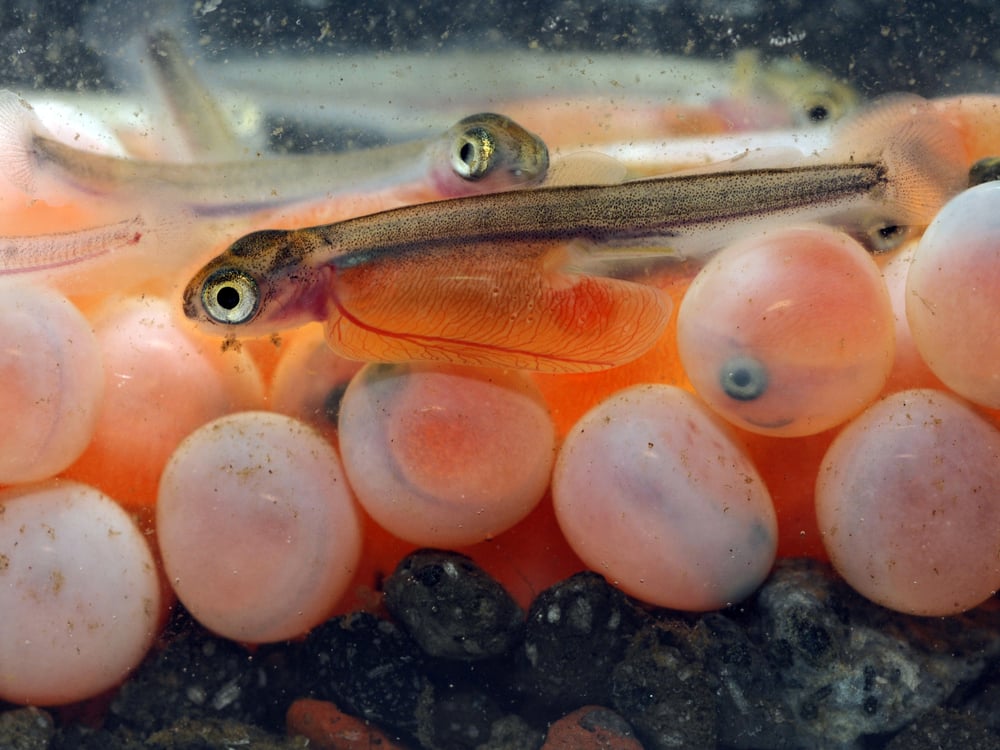 Where to Find Them

Coho Salmon are well-populated through the North Pacific Ocean. These fish naturally inhabit most streams and rivers through California, Oregon, Washington, the Canadian Pacific coastline, and Alaska.

The great lakes and it’s tributaries also have a Coho population in the United sates.  The Salmon River in New York is famous for it’s fall salmon run.

Young Coho in freshwater habitats feeds primarily on plankton and small insects. In the ocean, they eat small fish, and adults are even known to eat the juveniles of other salmon species.

With their modest size averaging between 8-12 pounds, Coho Salmon has a long list of predators. Otters, seals, sea lions, sharks, whales, bigger fish, and birds all feast on a steady diet of coho salmon. Aside from predators, the biggest threats to Coho Salmon are sport fishing and environmental factors like climate change and erosion. 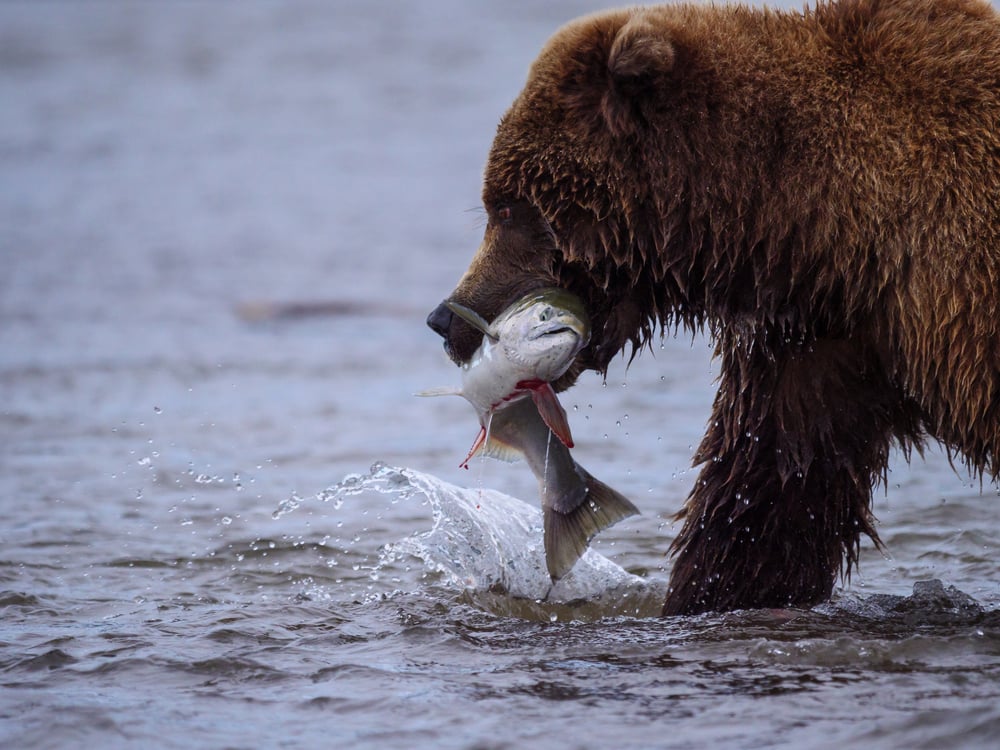 Where to Catch Coho Salmon

The art of fishing for Coho salmon is a moving target depending on the season and where they are in the spawning cycle. If you are fishing in the ocean, July to early September is the target for Coho Salmon. At the end of the summer or early fall, these fish will begin gathering in bays and inlets in preparation for moving upstream to spawn.

How to Catch Coho Salmon

Coho salmon often cohabitate with their larger relatives, King Salmon, so we recommend using the same set up for both fish because you never know which one you will hook. Coho is much smaller than King Salmon, but if you use a minimum of a medium-weight rod and reel set up, you won’t be underpowered if you hook the bigger fish.

You can opt for using lures, flies or bait when fishing for salmon.  The most common salmon fishing bait is salmon eggs because they are cheap, bright, colorful, and tasty. 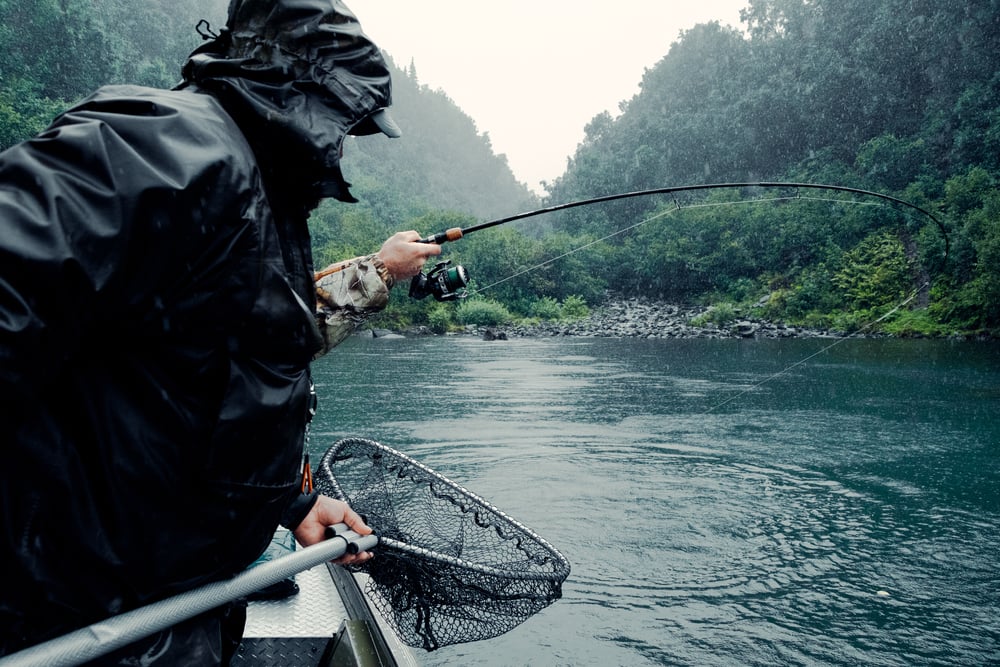 How to Eat Coho Salmon

Ocean-caught Coho Salmon receives high praise for taste due to its high-fat content. Stocked Coho or freshwater Coho may have lesser fat content and a more bland taste. It still falls below Chinook Salmon for preferred table fare but makes its way pretty high.

Due to the fat content, it is better to use a cold-smoking process. Ideally, the best cooking method is poached salmon because it is the most gentle. Pan-searing over medium heat also works well for Coho. This mild-flavored fish pairs well with herbs like dill and fats like butter or cream. 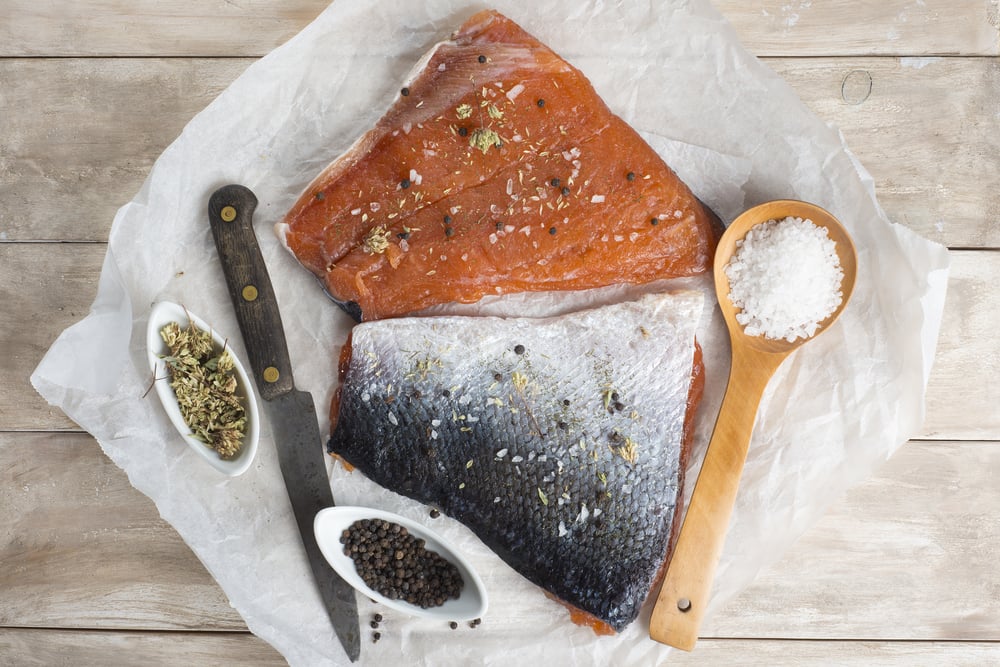 What to Remember About Coho Salmon

Coho Salmon is possibly the most popular sport fish in the Pacific Northwest. The best time to catch these silver salmon is in the late summer or early fall before returning to the streams to spawn. Coho Salmon are considered single lifespan spawners. They live for about three years and die after spawning.

The popularity of Coho as a sport fish is driven largely by its manageable size and desirability as a tasty food source for humans as well as its natural predators. The coho populations are healthy and abundant, thanks to responsible management and responsible fishing.