Striped Bass: About the Species 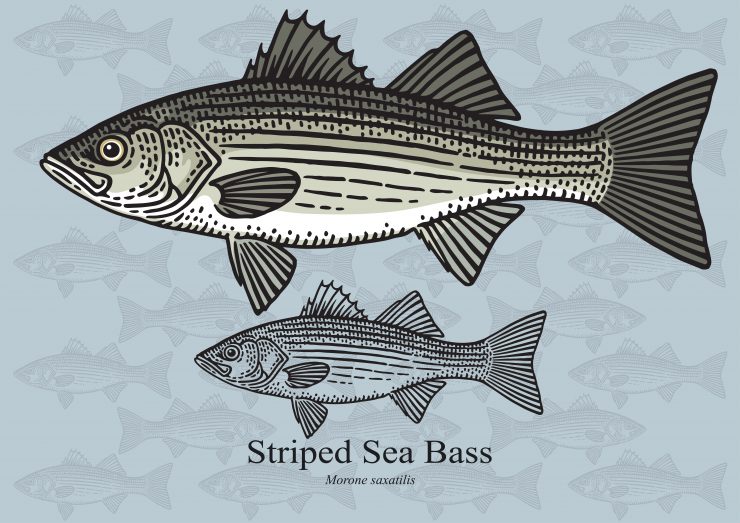 Striped Bass are a popular fish to target on both the East and West Coasts of North America.  Here is everything you need to know about this member of the Moronidae family.

Morone saxatilis is the scientific name applied to the striped bass. This fish is also called the striper, the rockfish, or the linesider. Classified as having an anadromous perciform, it is part of the Moronidae family.

Stripes that tend to have a dark hue are noted as marking the body’s longitude from the end of the tail to the back portion of the gills. It is typical for this type of fish to be around 20 to 40 pounds in weight at the mature state.

Older stripers have an olive green tint to their backs, while younger fish are more silver. 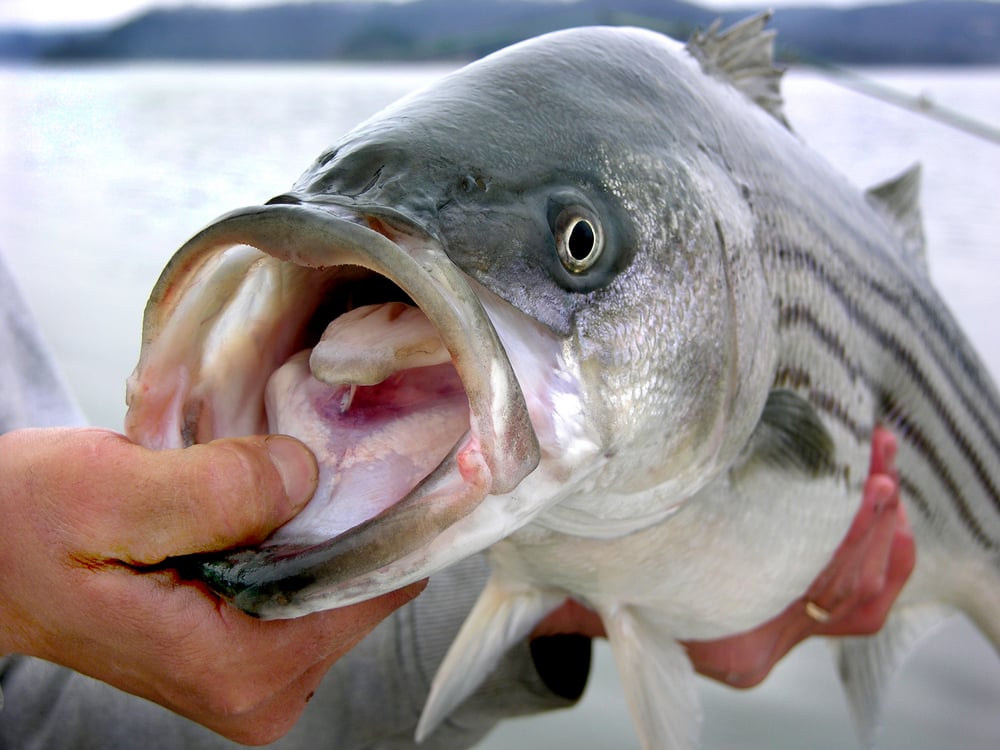 California did not possess striped bass in the past. Striped bass originated in the East Coast, from where they were brought to California back in the year 1879 from the Navesink River, which is located in New Jersey. Thus, 132 small basses were the ancestors of the striped bass of California today.

These fish have greatly multiplied since that time. People first caught striped basses in California in the regions of Monterey, Lamaeda as well as Sausalito. Then some people took action by placing more striped basses within Susan Bay. This action took place in the year of 1882.

The world record for the largest striped bass indicates that the striped bass is noted as weighing 125 pounds. This particular striped bass was found in North Carolina when it was captured via a seine net usage in the year 1891.

But it is also interesting to note several years ago, another remarkably large striped bass was found in the state of Massachusetts, which weighed 112 pounds. In the Pacific, no striped bass have been noted to reach more than 100 pounds.

However, it is interesting that in the year 1919, the San Francisco market recorded that a striped bass had a weight of 78 pounds. At present, the record of the most massive striped bass in the sport of fishing in California is considered to be 67 ½ pounds, which was noted as being found back in May of 1992 in the region of the O’Neill Forebay. 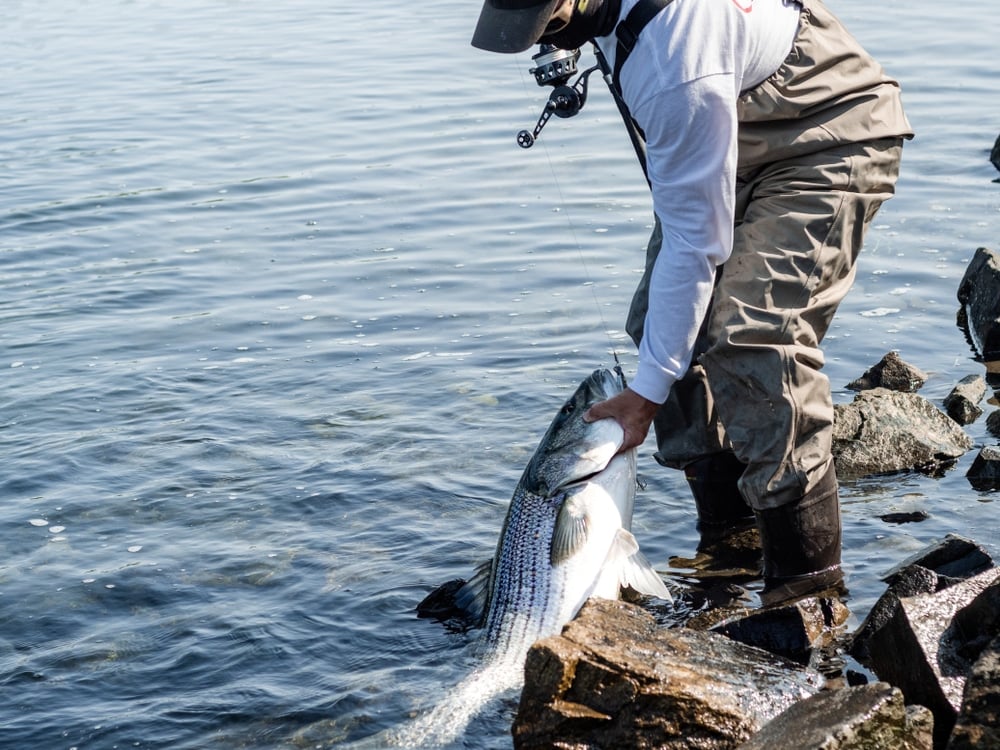 Someone can discover the age of a striped bass by noticing the scales because there are marks on the scales that indicate growth. During the winter season, this fish undergoes a process of growing at a slow rate.

At this time, there is the formation of a series of rings spaced close to each other at the edge of every one of the scales. The rings are referred to as annuli and are examined via a microscope to determine the fish’s age.

The presence of several thousand scales aids in the determination of the quickness that a striped bass experiences growth. Once the first year has ended, It is typical for striped bass to have a length of four to five inches. When a striped bass is two years old, it is usually around eleven inches in length. When it is three years old, it usually has reached a size of sixteen inches.

Moreover, when it is four years old, it is about twenty inches long. If a striped bass has a length of thirty-six inches, this generally indicates that the fish is around twelve years in age. In such cases that this type of fish possesses a weight of more than fifty pounds and has a length of forty-eight inches, the striped bass is determined to have an age of more than twenty years.

Striped bass are known to have a habitat that spans the Atlantic coast. Now the habitat of these fish also spans the West Coast and California.  They are also found in the Mississippi watershed and coastal areas.

There are also land locked stripers in lakes throughout the US.

They perfer cold waters ranging from 50 degrees to 65 F.

They are plentiful in the Chesapeake bay, Delaware and other spots along the Atlantic Coast waters. Typically these migratory fish follow the food sources that are also migrating. 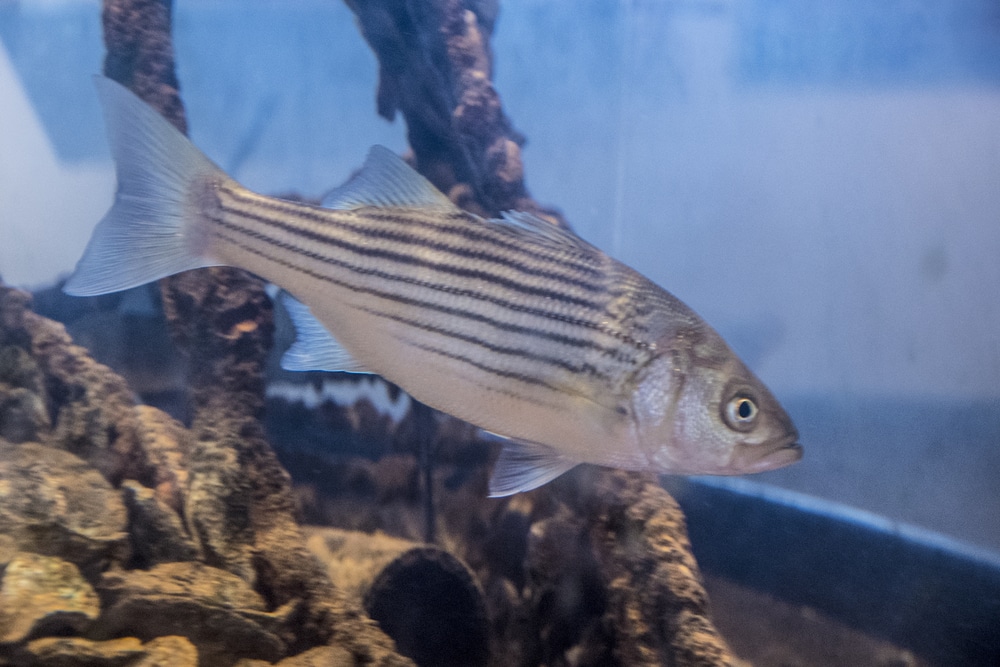 The diet of the striped bass changes at various phases as it develops to a state of maturity.

The larvae choose to eat zooplankton. The young fish tend to have a diet of worms, shrimp, insects, along with other types of crustaceans. When striped basses are mature, they enjoy a diet of herring, menhaden, silversides, flounders, smelts, mummichogs, and sand eels.  Stripers are scavengers and opportunistic eaters.  They will eat common marinelife found in their local habitat or migration patterns.

Though the striped bass can become a relatively large size, this fish does have some threats against it.

The striped bass population was severely hurt through the 1980s so the US government had to step in a put restrictions on fishing for them.

Their biggest danger is humans with recreational and commercial fishing and consuming them. Birds that are predators, such as the osprey, will swoop down to make a feast on this fish. Also, cod, sharks, bluefish, and even seals enjoy tasty meals of striped bass.

Due to strict conservation efforts, the striped bass have made an amazing come back in the last 10 years or more. 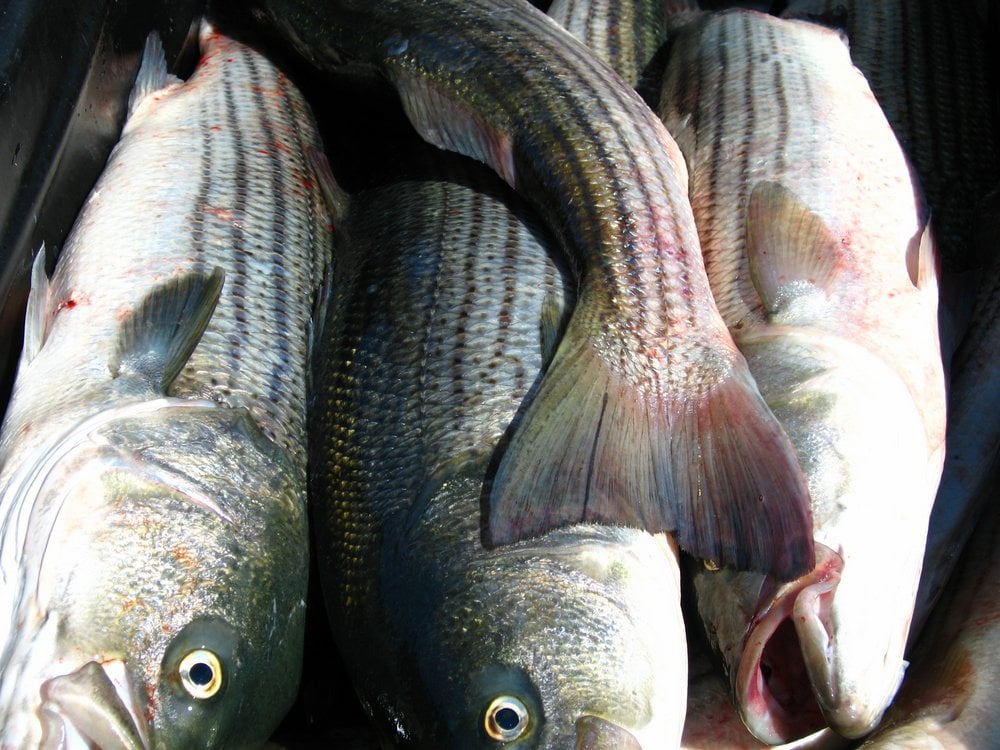 How to Catch Striped Bass

Mostly all types of rods and reels that have somewhat more weight than a spinning system that is light will be appropriate for catching striped bass. When tackle is noted as being light, this brings more pleasure for the sport of fishing. But there may be times when there is more benefit to using tackle designated as being heavier.

Some fishermen prefer trolling lures, others like to use live or natural baits.

Take into consideration, for example, that if someone is engaging in fishing for striped bass from a charter boat, then it is highly applicable to use tackle that is heavier to ensure the prevention of lines becoming fouled. Also, when the water is deep, then it is a good idea to apply the usage of sinkers that are heavy.

Where to Catch Striped Bass

Ocean migrating Striped Bass travel along the Atlantic Coast from the open ocean to their spawning rivers and back each Spring and Fall. For East Coast fishing, this happens from Maine to The Chesapeake Bay, Delaware Rivers and the Hudson. Summertime they hold in the New England waters around Massachusetts, New Hampshire and Maine.

Younger stripers usually stay in their local waters until they are old enough to migrate with the big schools.

Our top Atlantic Coast places include:

West Coast of the US

If someone desires to be part of a charter boat fishing expedition, then such excursions usually occur on the upper part of the Sacramento River or in the Delta. Then when it comes to the matter of private boats, great fishing locations tend to be in the following areas:

♦ as well as the San Pablo Bay.

It is a good idea to use smaller boats to handle more remote regions, such as the Napa River and the San Joaquin River. Small boats can manage the Delta’s sloughy areas rather well, too, for some enjoyable striped bass fishing.

For those who tend to prefer to fish from land, then many people enjoy fishing along the Sacramento River in Colusa all the way to Courtland. Many people experience great striped bass fishing from the shores of San Francisco Bay. Also, the Berkley Fishing Pier proves to be a highlight destination for striped bass fishing.

The Mississippi River is home to Striped Bass populations and these fish migrate the river and open ocean from Louisiana to the panhandle of Florida. 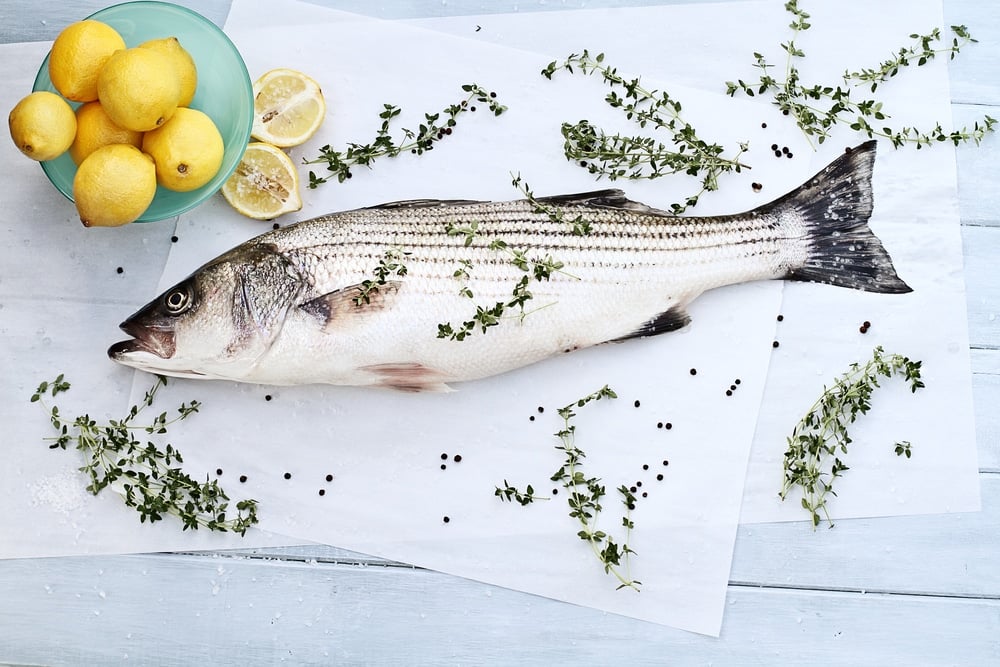 If you are yearning to eat some delicious striped bass, try grilling it. Thyme is a great herb to add to this fish to boost your meal’s flavor to make it much tastier. It also will pair nicely with a side of green salad.