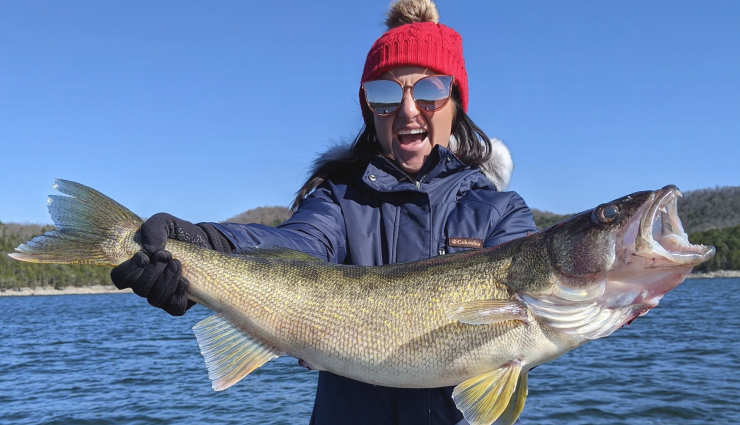 Table Rock Lake, located in southwest Missouri near Branson, is one of the most outstanding fisheries in the United States. A man-made lake, the U.S. Army Corps of Engineers began construction on the Table Rock Lake Dam across the White River in the fall of 1954.

The dam was completed in 1958, and the lake was filled by 1960, opening it to outdoor recreation and fishing enthusiasts.

Table Rock Lake sprawls out over 67 square miles and has an impressive 800 miles of shoreline. The lake is well known for its clear water and extreme depths. Water clarity exceeds 10 feet during certain times of the year, and maximum depth bottoms out at 220 feet.

The lake is home to a multitude of fish species including largemouth, smallmouth, spotted, and white bass, black and white crappie, three different kinds of catfish, thousands of sunfish and bluegill, paddlefish, and an emerging walleye population.

Fishing is a popular pastime and sport year-round on Table Rock. The cycle begins with the spring as the lake begins to buzz with life. Crappie are some of the first active fish, beginning their spawn when water temperatures reach 55 degrees.

March and April are the most productive times for slab crappies, and the river arms command the best bite. Good numbers of white and black crappie can be found in the James River, Kings River, and Long Creek arms. Standing timber, brush piles, and docks are home to crappie throughout the spring and can be caught using a variety of jigs or corks with minnows.

Bass begin their pre-spawn staging in late February and early March. They will begin at the mouths of pockets and creeks and slowly make their way back to beds and spawning locations as the water begins to warm into the 60s. Alabama rigs, jerkbaits, crankbaits, spinnerbaits, swimbaits, and soft plastics are all effective methods during this time.

Smallmouth and spotted bass spawn first when water temperatures are between 60-65 degrees. Largemouth bass follow as the water warms above 65 degrees. All fish spawn at different times – it is not uncommon to see spawning fish as early as the end of March and as late as June depending on water temperatures and weather conditions.

As water temperatures rise into the 70s, the lake approaches its summer/peak season. Late April and early May are excellent times to target big smallmouth bass with ned rigs, tubes, jigs, crankbaits, and swimbaits.

When June rolls around, most bass have finished their spawn and have moved out to either post-spawn or summer locations. Once this deep-water relocation occurs, around 75-80 degrees, the dropshot bite will reign supreme throughout the summer months and into the fall.

Artificial worms and nightcrawlers are the most effective baits, and quantities of spotted bass are highest during this time. Spotted bass can be found schooled up on main lake gravel points, humps, breaks, and brush piles between 20-40 feet. Brush piles can be particularly good structure during the hottest months, providing cover for top predators such as catfish and walleye.

Topwater baits such as walk-the-dog baits, poppers, and buzz baits are good options in the early morning and late evening during the steamy summer days.

The dropshot bite will typically last into September, then start to die off as the nights become cooler and water temperatures begin to drop back below 80 degrees as we near October. Fish begin their fall transition and scatter between deep and shallow water making them a tough target for a short period of time.

Shallow fish are typically most active, feeding up before the water cools off and the winter period begins. Due to the transitional nature of the fall season, perseverance is key during this time of year as the bite and fishing conditions vary widely from day to day.

Effective fall presentations are similar to those of the spring. Crankbaits, spinnerbaits, swimbaits, and large jigs are top performers with jerkbaits and topwaters bringing up the rear.

As December approaches and water temperatures dip back below 60 degrees, fish move to the deeper parts of the lake and get ready to hunker down for the winter. December and January can be very productive times of year to fish but finding shad schools is the key to success. Ice jigs and jigging spoons fished around bait balls can produce chunky spotted bass, white bass, largemouth bass, smallmouth bass, and even the occasional walleye.

Fish typically relate to the guts of creeks or offshore runouts and humps during this time and can be found anywhere between 50-100 feet. Water temperatures will dip as low as 40 degrees during the cold winter months, but ice rarely forms on any part of the lake. As February approaches, the walleye become the first fish species to spawn in the upper reaches of the Kings River Arm.

This signals the coming of the next season’s spawn, and the Table Rock Lake cycle begins once again – providing tremendous fishing opportunities year after year for both amateur and professionals alike.

Fishing on Table Rock Lake can be a daunting task for first time visitors due to the sheer size and complexity of the waters. Professional fishing guides use their instructional services and expertise to help others experience the best Table Rock Lake has to offer without the hassle and stress of fishing a new body of water.

Trips typically include a first-class boat, state of the art electronics, fuel, bait, tackle, drinks, and fish-cleaning services. Guides do the work for you, so you can focus on living in the moment and enjoy your Table Rock Lake adventure to the fullest.

Captain Keegan Lathrum is the owner and operator of Magic Spot Fishing Guide Service on Table Rock Lake. With over 15 years of experience fishing Table Rock Lake, he enjoys sharing his knowledge and expertise with both novices and experts. Captain Keegan prides himself in exceptional service, customer satisfaction, and strives to make every trip a memorable experience. Give him a call today to plan your next fishing adventure!
www.magicspotfishing.com
(402) 830-8692
keegan@lathrum.net