Crappie is a freshwater species that are found in lakes, sloughs, ponds, and backwater pools in the US, however, they tend to prefer taking shelter beneath fallen leaves and vegetation. 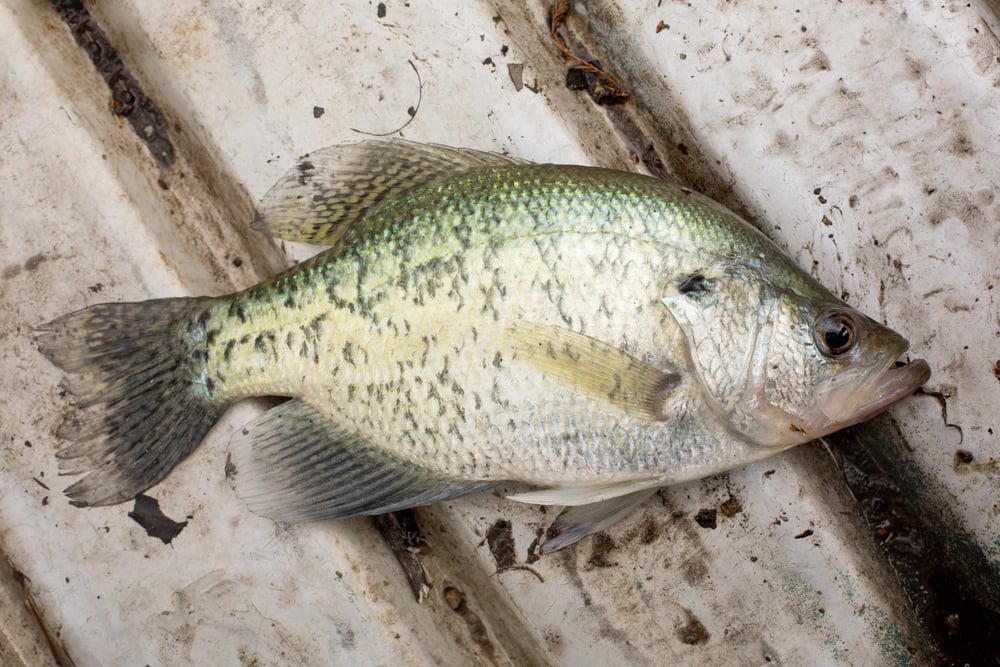 Although this species is native to the US, they have since been introduced to waters in areas elsewhere excluding Alaska and Hawaii. Whilst crappies may not be as popular as other types of fish, they are one of the biggest panfish that you can get and they are also highly prized.

If you are new to crappie fishing, you may be wondering how White Crappie and Black Crappie differ. You may think that the color difference is the biggest giveaway but this is not necessarily the case, in fact, whilst they share many similarities, both species differ in a few ways too.

We have compiled a guide below where we have highlighted all of the key differences between white and black crappie. After reading, you are likely to find it easier to distinguish between both types.

What Is The difference Between White And Black Crappie?

The color of each species can vary. In fact, they are both known to change in color during different seasons and because of this, distinguishing between each type can be quite a challenge. For example, the males of both species can turn slightly blue or dark during spawning.

When inhabiting muddy waters, sometimes their markings will look as if they have disappeared. In some instances, you will find very pale crappies that you would initially look at and think are white but they are actually black. 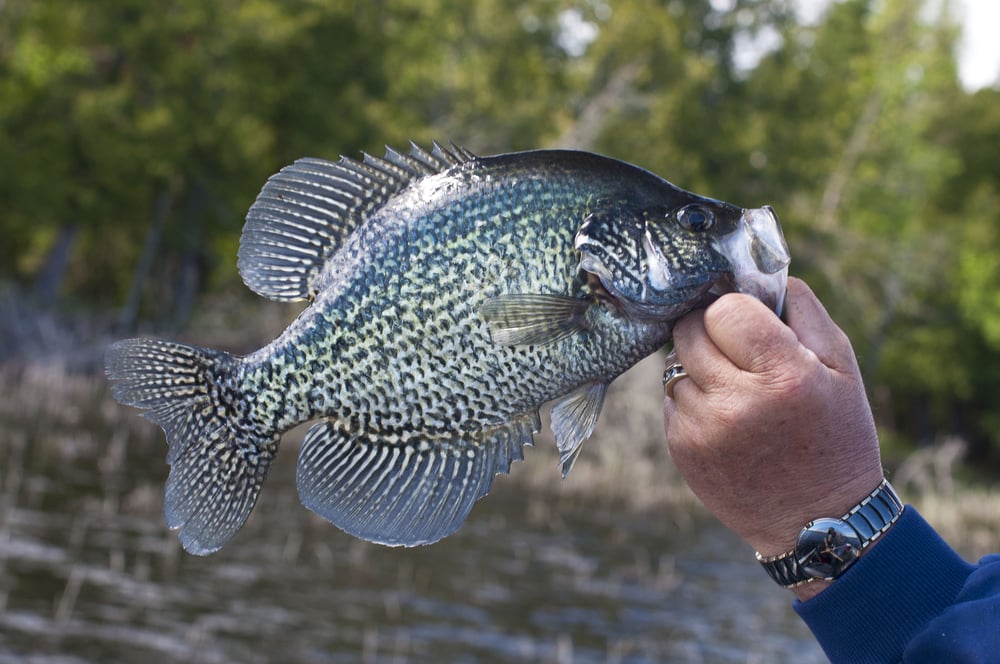 Perhaps the easiest way of identifying each type of crappie is by looking at the regularity of the markings or by counting how many spines they have on their dorsal fins. First, let’s discuss the markings in a little more detail.

The markings on the body of black crappie are more irregular. Also, they tend to have dark blotches. White Crappie on the other hand have vertical bars that run down their bodies.

If you cannot tell both species of crappie apart just by looking at the markings, you may be able to by assessing the appearance of the dorsal fin. This fin is located on the top of the fish’s body and will help to keep it stable as it swims.

The dorsal fin of crappie is hard and almost replicates the feel of needle-like spines. The toughness of the dorsal fin helps to keep them rigid. When counting the spines on the dorsal fin you will discover that white crappie has 6 whilst black crappie have either 7 or 8.

There are also differences in the size of white and black crappie. Typically, when caught, black crappie measure between 4 and 10 inches, however, there are instances where they have grown longer than this. 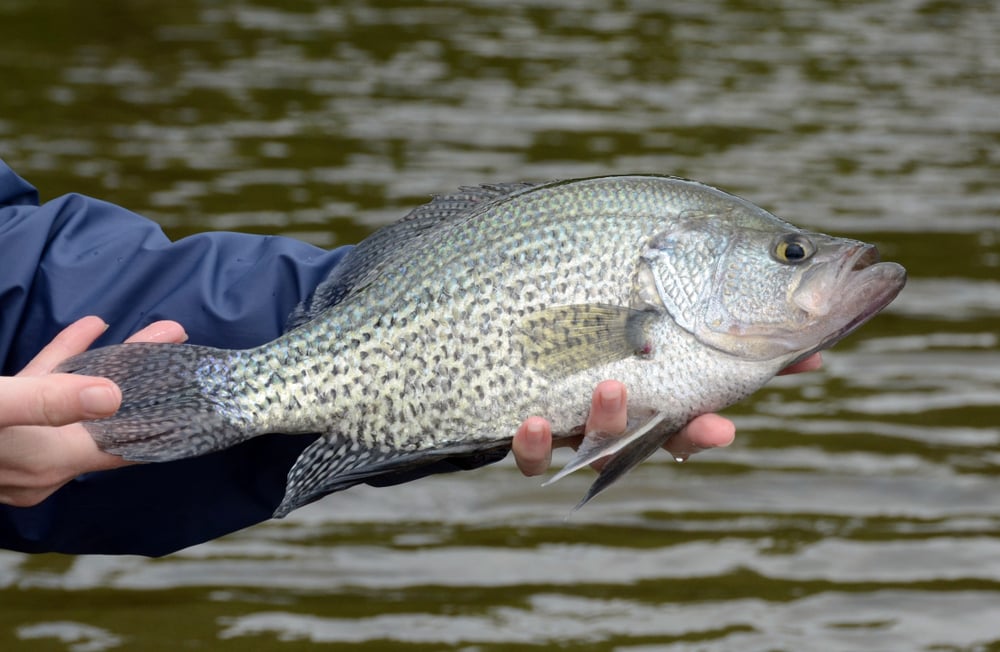 White crappie typically measure between 9 and 15 inches which is considerably larger than their black counterparts. Apart from the size, you will also be able to identify differences in the body shape of both types of crappie.

White crappies on the other hand, typically look longer than black crappies and they also have bigger mouths.

Another difference between white and black crappies is evident in the reproduction rates of each species. Black crappies are known to reproduce at a much faster rate than white crappie. In fact, female black crappie can produce around 11,000 eggs.

In some cases, they can produce an astounding 180,000 eggs. After spawning, the male black crappie will then make themselves responsible for guarding the nest until the eggs have hatched. There are noticeable differences in the number of eggs that white crappie produce.

Female white crappie is believed to produce at least 5,000 eggs, however, they can produce as many as 100,000. The male white crappie will display similar behavior to the male black crappie after spawning in the sense that they protect the eggs until they hatch.

Although there are many differences between white and black crappie, they share similar dietary habits. Usually, black crappies feed in the early hours. Their diet typically consists of insects, crustaceans, crawfish, and worms.

As they age, they will then start to feed on smaller fish. White crappies also eat insects and just like black crappie, when they mature they will begin feeding on fish. Although both types of crappie eat insects, black crappies will eat more insects.

Moreover, as a species crappie will build their nest in a similar way and they will usually wait until spring when the weather starts to get warmer. Furthermore, another similarity can be seen in the weight of both types of crappie.

Typically, they tend to weigh around half a pound but their weight can fluctuate depending on a few factors. For example, it will depend on the area that they are from, their eating habits, and how active they are.

Do White And Black Crappie Live In The Same Habitat?

In fact, white crappie will be content living in muddy or clear water. Also, they do not need lots of vegetation and will live in open waters.

You will usually find white crappie in pools and river backwaters whilst you will find black crappies in lakes, reservoirs, and large rivers that have a sandy bottom.

It is worth noting that whilst black and white crappie have different preferences in regards to the type of water, you will often find both species inhabiting the same water.

Generally, in lakes and reservoirs, they remain in the shallow parts of the water. As such, you may find that you end up catching a mixture of both.

As you can see, there are several differences between white and black crappies. It is important to remember that the species isn’t always implied by the name of the fish.

If you struggle to tell the crappies apart just by looking at them, you can inspect their dorsal fins and you can also look at how their bodies differ in shape.

Although there are many differences between white and black crappie, they also share a few similarities. For example, they eat similar things and are of similar weight. Also, they will often be seen inhabiting the same waters.