Home > Saltwater Fishing > 11 Types of Grouper to Catch in Florida

11 Types of Grouper to Catch in Florida

If you’re heading to Florida for a long-overdue vacation when you do hit the coast, you’re probably going to charter a boat and head out to sea to make the most of your downtime with an afternoon or two filled with fishing.

And when you’re fishing in Florida, there’s a good chance that you’ll end up catching a couple of the Orange States’ favorite residents, the Grouper. 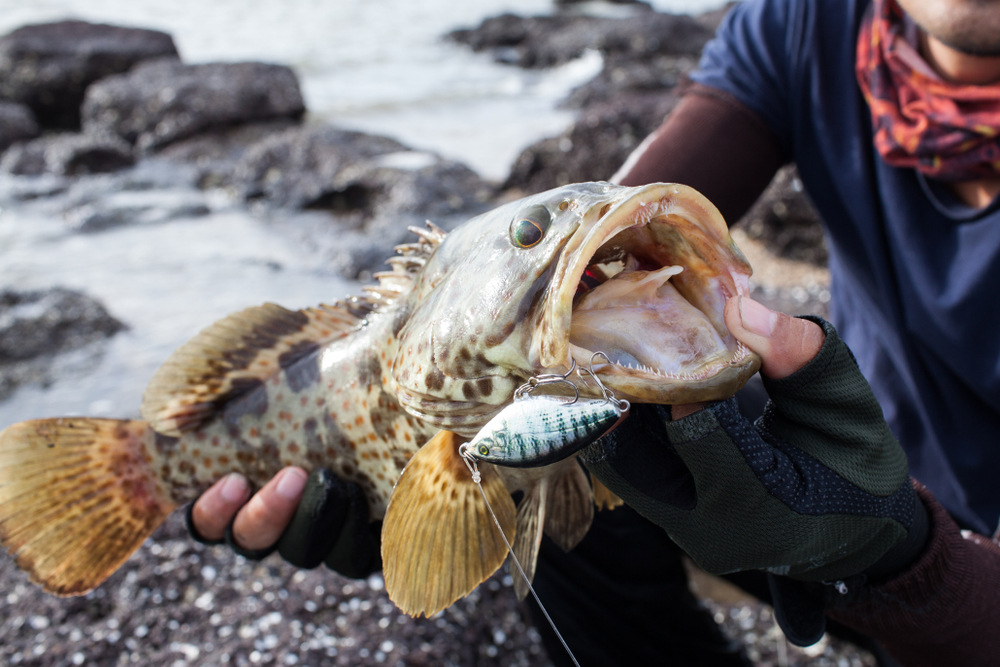 But there are all kinds of Grouper species swimming in the sea off the coast of Florida, and so you’ll know exactly what the fish who’s going to take your bait while you’re bobbing around on the ocean is, we’ve put together this short, snappy guide to the types of Grouper that you might run into on your vacation.

And the best thing about catching Grouper in Florida? As it can be a relatively expensive menu item on a night out, you can gut, prepare and eat your own, self-caught taste of the Gulf when you head ashore. So take a deep breath, it’s time to dive in and meet Florida’s favorite Groupers.

One of the grandaddies of the Grouper family, the Black Grouper isn’t exactly the easiest fish to hook as it spends most of its life hanging out at the bottom of the Atlantic far from the prying lines and over-eager eyes of its would-be hunters.

They tend to favor deeper waters, and can usually be found anywhere between one and three hundred feet, but come the summer months when the spawning season arrives they move into shallower waters, and venture a little closer to the warmth of the coastline.

As these behemoths of the deep can grow to be nearly four feet long and weigh anything up to one hundred pounds they’re prized by the commercial crews who make their living from the sea.

If you are lucky enough to haul one in though, it’ll probably be around half the size and weight of the most prized of catches.

Having said that, the biggest Black Grouper on record was caught by a charter off the Gulf of Mexico and weighed close to one hundred and twenty-five pounds, so you never know what might happen while you’re out there.

We were brought up to call them Gray groupers, but other fishermen use their more common name, the Gag Grouper. And there’s no better place to go fishing for them than the waters off Florida, as the biggest Gag Grouper ever caught was hooked in Destin, and weighed eighty pounds.

These long-lived fish tend to live for nearly thirty years and favor reefs and slightly shallower waters to the Black Grouper, so the chances of bumping into one of them while you’re fishing are a lot higher.

They may not be as big as the Black Grouper, but as the average Gray can weigh up to forty pounds and be three feet long if you hook one, you’ll be in for a fight and it won’t give up easily.

But then, those are the kind of memories that fishing trips are made of, so it’s something to look forward to if you do manage to land one.

There was a time when the chances of even seeing one of these fish were slim to non-existent, as they were almost wiped out during the latter half of the twentieth century by over-eager fishermen.

Absolutely fearless, Goliath Grouper have been known to swim alongside scuba divers and satiate their curiosity by cruising close to the surface to see what the strange floating things carrying the humans are.

And they have no reason to be scared if anything in the water except the apex predators that terrify every living creature, as Goliath Groupers can grow to be eight to nine feet long, and even though the biggest of these giant fish ever caught was six hundred and eighty pounds (and was also landed in Florida), marine biologists have estimated that they can grow to be anything up to eight hundred pounds.

If you do, somehow, manage to catch one, you’ll have to let it go as the Goliath is protected by law, and it’s illegal to catch and kill it. Catch and release yes, catch and kill no.

Named after the largest city in, and the capital of, the Bahamas, the Nassau Grouper is another endangered member of the Grouper family that’s protected in Florida. 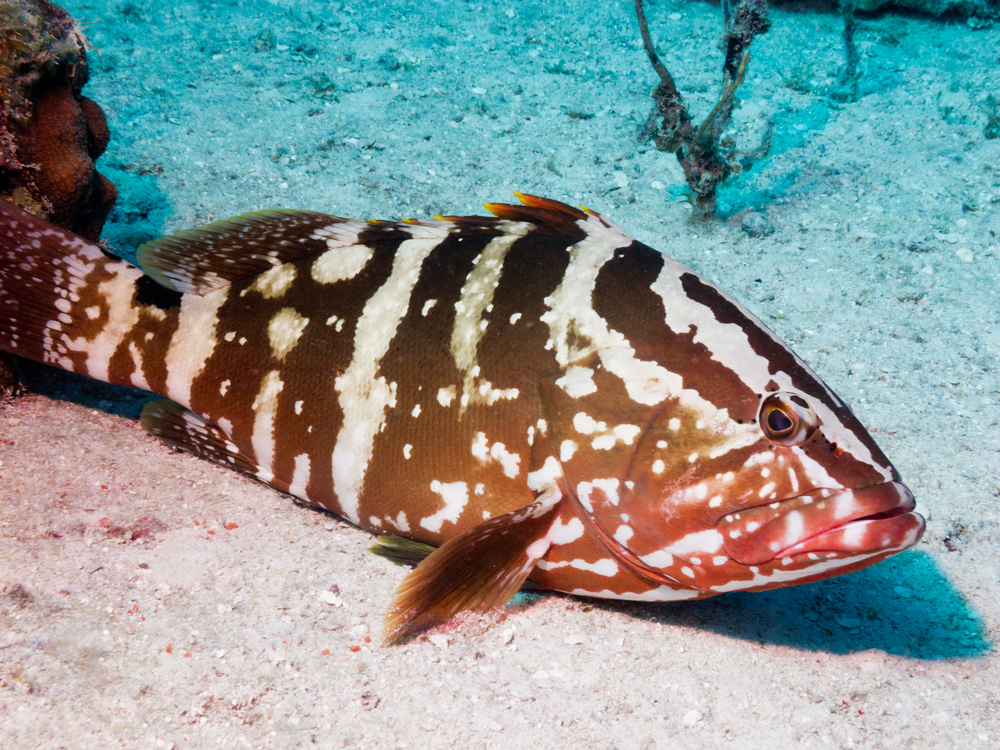 Oddly enough, it’s the Nassau Grouper’s intelligence that led to it becoming endangered, as it fuels its natural curiosity, which led it to straight into the arms of fisherman and led to a steep decline in its numbers.

While the biggest Nassau ever caught on record was thirty-eight pounds, that was a colossus among this fish that likes to team up with other predators to reduce its workload and outsmart its prey by hunting in packs. It’s another catch and release fish that tends to swim closer to the Bahamas than the Florida coast.

If you want to catch one of these restaurant favorites, you’re going to have to go a long way out as they favor the deepest waters and you’re unlikely to hook one at less than seven hundred feet. But then, as they taste so good, it’s worth going the extra mile and trying a little harder to land one.

They’re far from the largest grouper that you can land, but as they’re so plentiful, and the numbers are fairly constant if you do land one of those two-foot-long denizens of the deep, you’ll probably end up with close to three and a half pounds of fish for the main course of your evening meal.

How they came by their name seems to be shrouded in mystery, but these fish are among the local fishermen’s favorites, as they can usually be found at a depth of one to two hundred feet, and are considered to be something of a delicacy.

Again, they’re not the biggest member of the grouper family (the largest ever caught weighed just over thirty-six pounds and was bagged in North Carolina) swimming in the waters off Florida, but as the average fish weighs around five pounds and is just under two feet in length, they’ll be a more than welcome addition to your dinner table if you do manage to catch one.

Another chef’s favorite, the fish that takes its name from the white markings on its body, the Snowy Grouper swims deep (between three hundred and seven feet deep) and is a lot bigger and harder to catch the Scamp.

When we say that they’re bigger we mean that they’re a LOT bigger, as the largest Snowy Grouper ever pulled from the depths was caught in Virginia and weighed seventy pounds. They may not be the best-looking inhabitants of the Gulf Coast, but they are one of the tastiest.

The Calico Grouper, or as Gulf locals call it the Speckled Hind is an elusive, bottom-dwelling member of the grouper family that can weigh as much as fifty pounds and likes to spend its time swimming around on the seabed, close to four hundred feet down.

And that’s all that we or anyone else really knows about this elusive fish. They’re still something of a scientific enigma, which is probably why they’re protected by the “Species of Concern” list. Our best advice? If you catch one, pose for a photograph and then let it go.

Second, only in size to the Goliath Grouper, the Warsaw Grouper can weigh in at anything up to four hundred pounds but if you want to hook one, you’ll have to explore the deep waters as these elusive fish swim and live around four hundred feet below the surface.

The problem with Warsaw Grouper is that any change in surrounding pressure can kill them, which means that by the time you’ve dragged them onboard after landing one, it’ll probably already be dead. So it’s a good job that they’re not endangered, and that they also taste pretty good.

The fish that’s surrounded by legend, myth, and mystery, the Yellow Fin Grouper’s Latin designation Mycterpperca venenosa is a clear indication that this yellow and red member of the family doesn’t belong to anyone’s dinner table.

It’s the only member of the Floridian Grouper family that’s poisonous to the palette, and even though you might be tempted to bring one of these two-foot-long, ten-pound monsters ashore with you, the best thing you can do is catch it and let it go.

Last, but by no means least on our list of Florida Grouper, is the Yellowmouth. Every bit as delicious as the Scamp, the smaller deepwater fish is one of the most perfect Groupers you can catch on your break.

It looks weird, it tastes good and it’s enough of a challenge to make you work for it, the Yellowmouth is the sort of fish you’ll be able to tell your work colleagues about.

And even though the fish you land won’t be anywhere as near as big as the twenty-two-pound beast that holds the record, it’ll still be big enough to create a story that you’ll be talking about for years afterward.

That’s all you need to know to bag the Grouper of your dreams when you head out to the Gulf Coast for the fishing trip of a lifetime. Have fun, and remember it’s not the size of the fish you catch, it’s the adventure that you have while you’re reeling it in that really matters.