Red Snapper Season: Everything You Need to Know

Whether you have just started fishing or have been a keen angler for years, red snappers are often remarked as one of the most popular types of snapper fish and luckily, we explain everything you need to know about red snapper season.

These fish are often found lurking towards the bottom of the ocean so knowing the best fishing spots will ensure that you have the best chances of success and will come away from your fishing trip with bags of red snappers for everyone to enjoy. 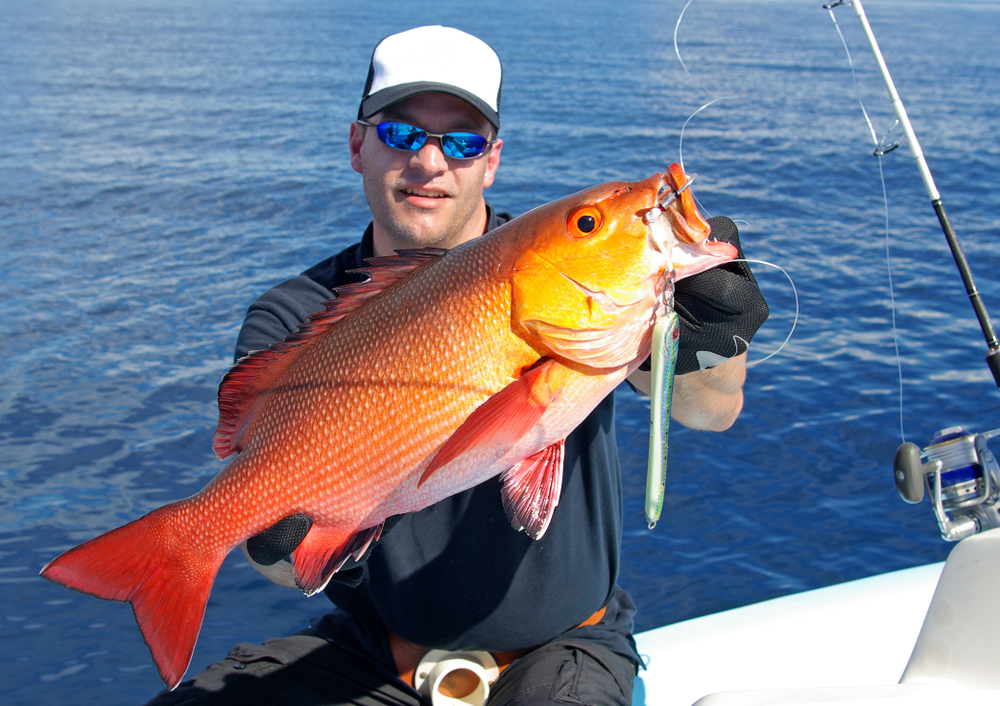 There are five Gulf States that you need to bear in mind and knowing their individual Red Snapper season will mean that you can go on your fishing trip at the right time with a higher success rate.

Here are the Gulf States’ seasonal dates and individual requirements:

The Alabama Red Snapper Season 2021 starts on May 28th and will take place every Friday, Saturday, Sunday, and Monday until the recreational quota has been met. Due to this requirement, there is no specific end date.

The Florida Red Snapper Season 2021 starts on June 4th and takes place until July 28th. As Florida has the largest body of water in the Gulf, these guidelines only apply to the State waters in the Gulf of Mexico.

Louisiana’s Red Snapper Season 2021 starts on May 28th and will take place every Friday, Saturday, and Sunday until the recreational quota has been met.

The Texas Red Snapper Season 2021 is all year round as their State Waters are available for anglers at any time of the year.

When it comes to the Federal Red Snapper Season 2021, you can apply for licenses to fish between June 1st until August 3rd if you are keen to catch some Red Snappers.

Why Are The Dates Different?

Reading the above Seasonal dates, you’ll notice that each state has different requirements and dates. This is because it is dependent on where the Red Snappers can be located as well as ensuring that the recreational quota is not exceeded for each state.

This seasonal information applies to both private anglers as well as those who plan on hiring a charter in state waters only. There are also limits on how much fish you can take away with you with four of the five states limiting each person to two fish with a minimum length of 16 inches.

The only state that has different rules is Texas which allows each angler to take four fish with a 15-inch minimum length requirement.

For the states that don’t have an end date to their season, the season will automatically end once the recreational quota has been met. However, if the quota isn’t met then there is most likely to be an extension to ensure that the quota is eventually reached.

State waters are defined as being within nine nautical miles from shore and anything beyond that is Federal waters. This means that there are separate rules when it comes to Federal waters as it is classed as an entirely different body of water.

When it comes to Red Snapper season in Federal Waters, we have given the dates above and it is important to know that this applies to any private angler who fishes recreationally as well as those who plan on hiring a charter.

Bear in mind that any charters that venture into Federal Waters must have the appropriate permits in order to prevent breaking any laws. When it comes to fishing in Federal Waters, there is a limit of 2 fish per person with a minimum requirement of 16 inches.

The Difference Between State And Federal Waters

Before you decide where you want to go on your fishing adventure, it’s important to know what kind of water you want to go to. This is because there are State and Federal Waters.

Knowing the difference between them will ensure that you are as prepared and safe as possible due to the licensing differences. The Gulf of Mexico is surrounded by a variety of different territories but what qualifies as that location’s responsibility can be tricky to understand.

The State Waters are defined by the first nine nautical miles away from shore and are where the majority of amateur fishing takes place. This is because it is easier to get licensing and find charters that have the permission to venture into State Waters is a lot easier.

Anything beyond the nine-nautical mile radius is classed as Federal Waters which requires a lot more paperwork and documentation as well as proving to be difficult when finding a charter as the Gulf of Mexico doesn’t offer Federal Water licenses to a lot of charters.

You can find Red Snappers in both State and Federal Waters but the larger Red Snappers are often found in the latter and there is a higher chance at success in Federal as there aren’t as many people fishing in these waters.

However, this isn’t to say that you won’t catch any Red Snappers in State Waters but you are much more limited in the area that you can fish.

Where To Go fishing

Knowing where the best places are to catch Red Snapper will ensure that you are being prepared and will also help you boost those chances of success. Another important thing to think about is whether the size of the Red Snapper matters to you.

Red Snappers like to swim in deep waters and are found in various locations of the Gulf thanks to the various underwater structures such as reefs which provide plenty of hiding spaces for them.

In the US, the best place to locate Red Snappers is in the Gulf of Mexico which is surrounded by five Gulf States as well as Mexico and Cuba with small fishing areas in Canada and Guatemala.

States such as Alabama and Louisiana are known for their large Red Snappers which we will delve into further later in this guide.

As Red Snappers are found in the deep bodies of the water, you’ll most likely have to venture out on a charter.

If you are unfamiliar with the territory then you should seek the guidance of a professional who knows the water and can take you to the best locations for catching Red Snappers depending on the time of day and what time of year you are going.

Here are the best fishing charters you should consult for venturing in the Gulf of Mexico:

Above The Salt Charters

The best places to find Red Snappers are in one of the Gulf States as they like to live in deep waters and hide in underwater structures such as reefs.

Alabama is home to many popular fishing spots for those who are wanting to catch their first Red Snapper. Places such as the Gulf Shores or Orange Beach are great places for Red Snappers with Alabama having an incredible 27 Red Snapper days in the past year.

Orange Beach, in particular, has been renowned for providing anglers with bags of Red Snappers and has also been known for its large size as well.

When it comes to the best chances of success and the most popular location for Red Snapper anglers then Florida is the best place for you. Not only does it boast fantastic weather but there are more fishing spots in Florida than in any of the other Gulf States due to the size of the Gulf.

Places like the Florida Panhandle have become a pilgrimage for those wanting to catch Red Snappers. Other great destinations within Florida are Destin, Fort Walton Beach, Panama City Beach, and Pensacola among many more.

For those who want to catch a large Red Snapper then there are few places better than Louisiana. The State currently holds the world record for the largest Red Snapper at an outstanding 50 pounds, 4 ounces, Louisiana has an incredible success rate and plenty of charters available so you can experience it for yourself.

Places like Venice are especially ideal for boosting your chances of success and the guides know the waters really well so they will know the specific areas where the Red Snappers are likely to convene.

Another Gulf State with a highly impressive Red Snapper success rate is Mississippi. For those who want a unique fishing experience, head to ideal fishing locations such as Biloxi or Gulfport where you can find plenty of large Red Snappers.

Lastly, another highly popular Gulf State is Texas as it is one of the largest locations for catching Red Snappers. Like Florida, Texas is full of fishing spots that have become renowned among anglers for their success rates such as Galveston, Port Aransas, and South Padre Island.

If you don’t want to venture to Florida but want to enjoy great weather and large fishing areas then Texas is the best choice for you.

What is the limit on Red Snapper?

The limit on how many Red Snappers you can catch is dependent on the State where you are planning to fish but the majority of States have a limit of 2 fish per person with a minimum length of 16 inches.

It’s always best to check through the rules and regulations thoroughly before you go so you can see the specific requirements of the state that you are visiting.

Is Red Snapper good to eat?

Red Snapper is a popular dish as it has a low calorie count as well as lots of protein making it rich in Omega-3 fatty acids, potassium, selenium and Vitamin A.

However, it is important to note that Red Snapper can contain mercury levels which makes it unsafe for young children and pregnant women to eat a large amount per month.

Overall, knowing where to find Red Snappers and what kind of habitats and conditions they like to swim in is the key to bettering your chances of success.

Whether you live nearby to the ideal fishing spots or are planning a trip, make sure you are as prepared as possible to ensure that you boost your catching rates.

As Red Snappers like to live deep in the water, you will likely have to board a charter so if you are venturing to unfamiliar waters, make sure you have a guide with you who can show you the best fishing spots.