Home > Freshwater Fishing > The Different Types of Sunfish in America

The Different Types of Sunfish in America

Sunfish (centrarchidae) are a popular family of freshwater fish native to North America. The name “sunfish” does not relate to a species (unlike the Ocean Sunfish), but rather a family of several species of fish. 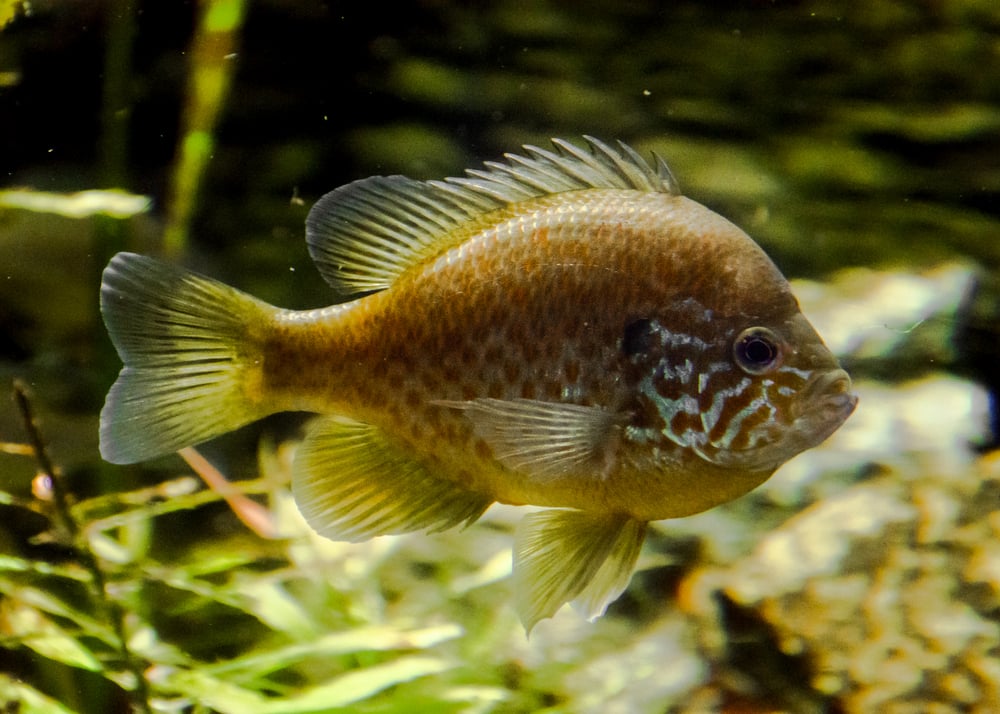 Sunfish are most popular amongst anglers of all ages and skill levels, from kids to expert fishermen, because of their varying sizes and how easy they are to catch.

Before we delve into each of the most common types of sunfish, let’s take a look at the key distinguishing features of the main species.

There are several features to look at when comparing and distinguishing one species to another in the sunfish family. These features include:

For those who don’t know, the opercular flap refers to the flap on the end of the gill plate.

Most sunfish species will have at least one of these features that looks distinctively different to another species. Hybrids are slighter harder to tell apart due to cross breeding, which is why we are going to focus on the naturally occurring sunfish species 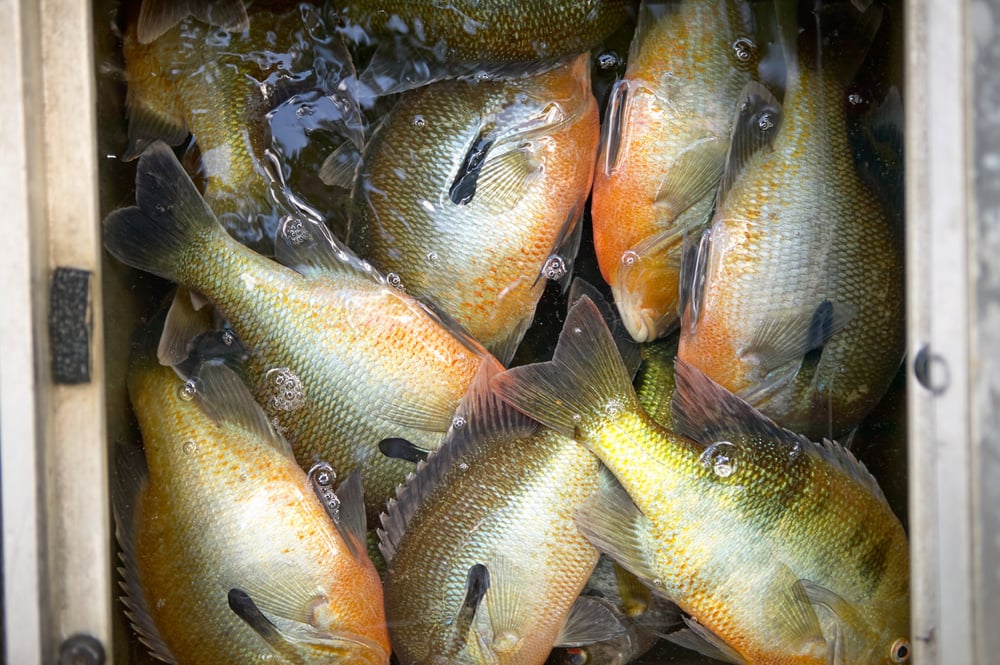 The redbreast sunfish is native to rivers across the United States and eastern Canada. This species is most commonly found in eastern North America, though it has been widely distributed as far as Texas.

It is suggested that redbreasts reach up to 11 cm long on average, with records of 30 cm long fish.

Redbreast sunfish primarily feed off invertebrates, insects, and snails. Not only are redbreasts caught for use as panfish, but this species is also popular amongst hobbyists with aquariums.

Distinctive features: As their name suggests, redbreasts have distinctive bellies that sport a red or orange color. Also, their opercular flaps are darker and longer than most sunfish species – looking something like an elongated earlobe! 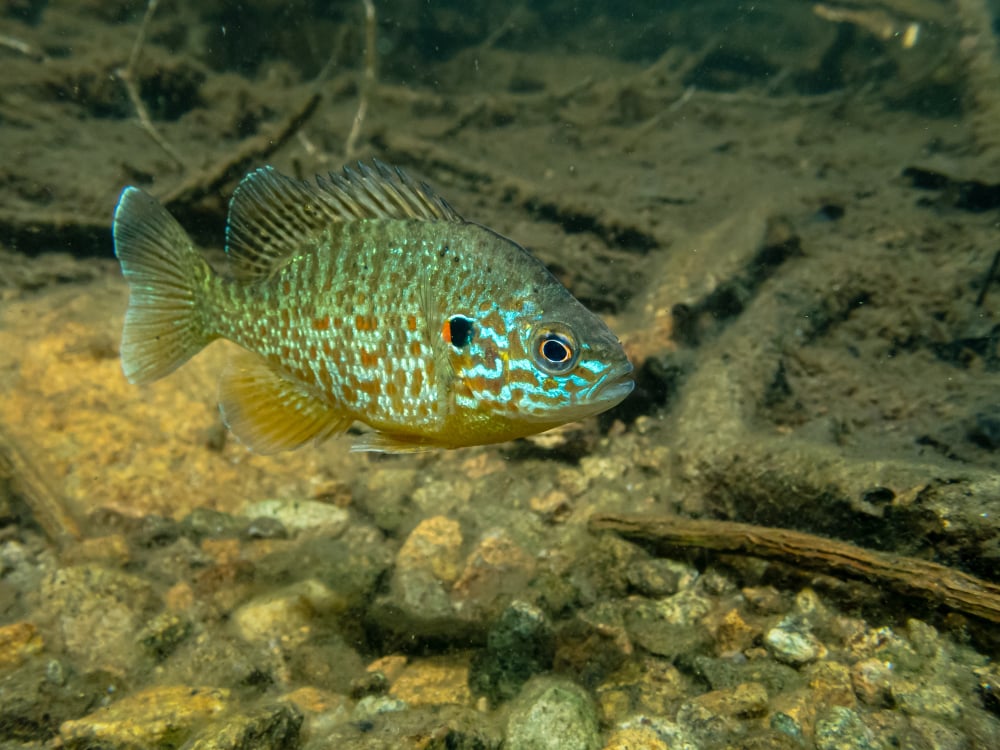 Green sunfish are native to an area east of the Rocky Mountains, ranging from California to the Gulf of Mexico, though they are now commonly found across the country’s freshwater backwaters and lakes.

This species is often caught as a mistake by anglers who aim to catch other fish, and they are most commonly used for food purposes or in aquariums. Green sunfish, interestingly, are aggressive by nature and will often attack bait and lures.

Green sunfish have large and long mouths, with the corner of their jaw reaching to the middle of the eye line. Their pectoral fin is around the same size and shape as the pelvic fin – short and rounded. The opercular flaps are also small, black, and with a white outline.

Distinctive features: As the name suggests, green sunfish are characterized by their green coloring! Most of these species will feature a bright yellow belly. 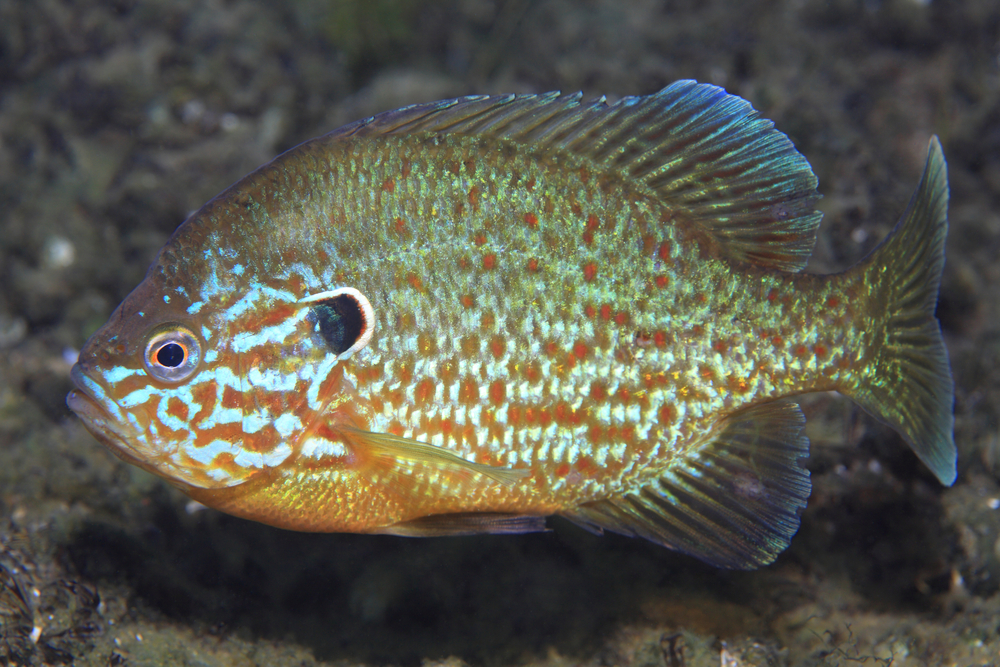 Often known as a common sunfish, sunny, or pond perch, the pumpkinseed sunfish is native to the Atlantic Coast of North America. This species is commonly caught throughout the middle of the United States, but they are considered an invasive species in Europe.

Pumpkinseeds are most commonly found closer to the shore of clear, warm waters along with two or four other adults. In fact, they are commonly found swimming with other sunfish species.

Anglers find pumpkinseeds a nuisance, as they are so likely to bite bait when the anglers are trying to catch other fish.

Pumpkinseed sunfish are most popular for their unique coloring – a mixture of blue, green, orange, and yellow scales. Their pectoral fins have a light yellow and white coloring, while the flexible opercular flap features a white and red edge.

Distinctive features: Pumpkinseeds are most distinctive for their blue horizontal lines through their gill plates. 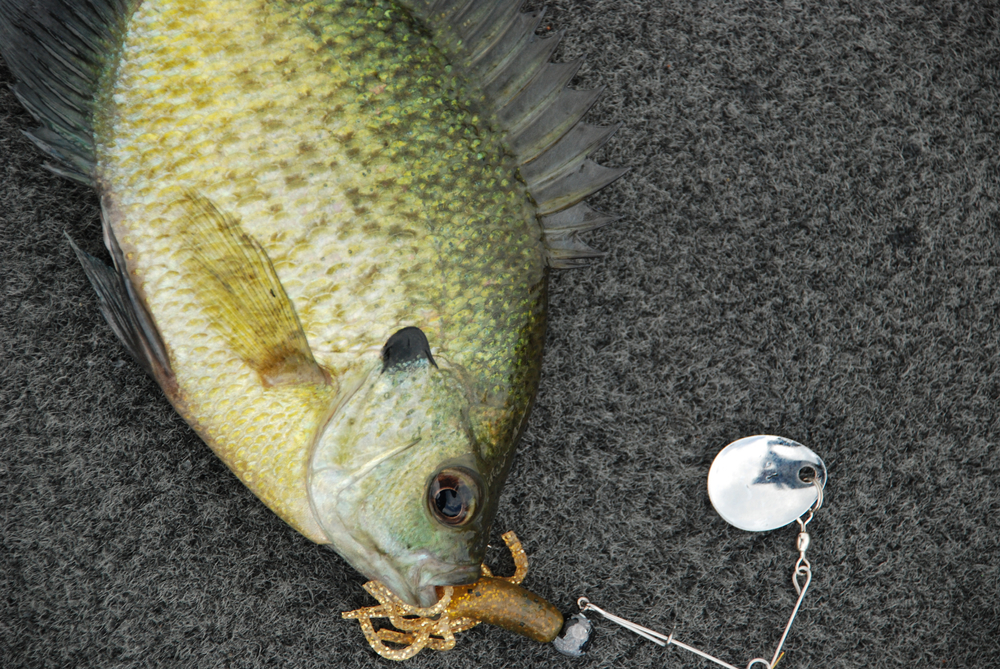 Often referred to as a perch, bream, or sunny, the bluegill sunfish is native to areas east of the Rocky Mountains and found across the country.

Bluegills are possibly the most popular sunfish species amongst anglers and predators, as they play a huge role in the food chain for kingfishers, snapping turtles, otters, and other sunfish species.

Their coloring tends to vary depending on the population, but most bluegills are yellow and white all over with dark gray vertical stripes.

Despite their small mouths, the jaw of a bluegill stretches to the end of the fish’s pupil. They have an elongated pectoral fin and a flexible opercular flap that is often darker than their yellow scales.

Distinctive features: The dorsal fin of a bluegill has a distinctive dark spot closer to the end of the pectoral fin. 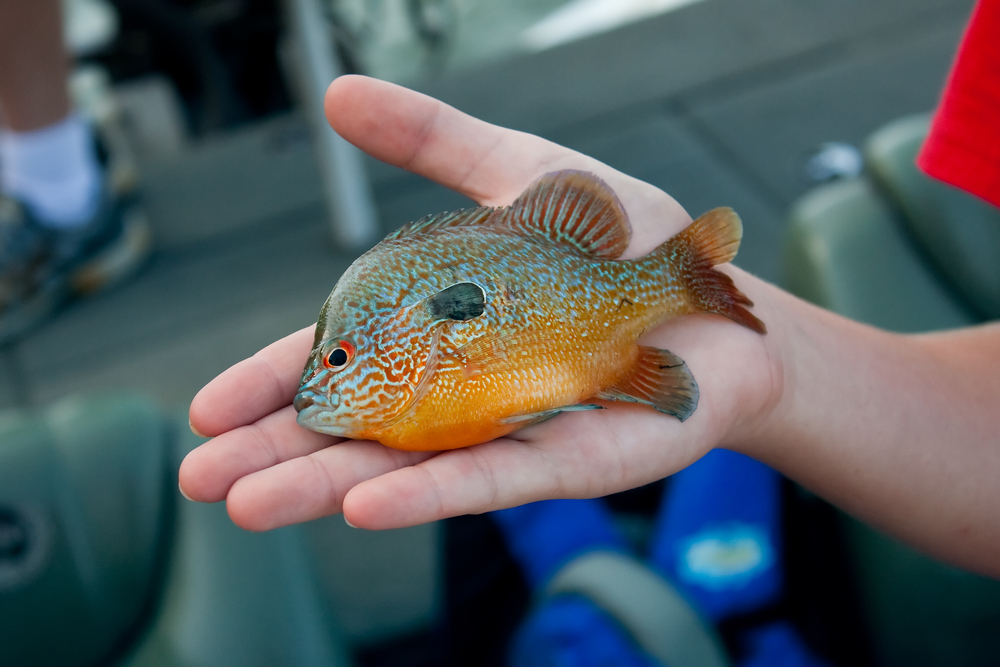 Often known as a cherry gill or a Georgia bream, the redear sunfish is native to the southeastern United States. Redears are a popular sport fish amongst anglers, which is why they are now distributed across America.

The redear sunfish is often mistaken for a bluegill sunfish, both because of their appearances and the fact they often school together. Redear sunfish, however, are slightly bigger and darker in color.

Redear sunfish have small mouths for their size, a checkered pattern of red, black, and white scales, and a long pectoral fin.

Distinctive features: This species got their name from their dark inflexible opercular flap with a red border. 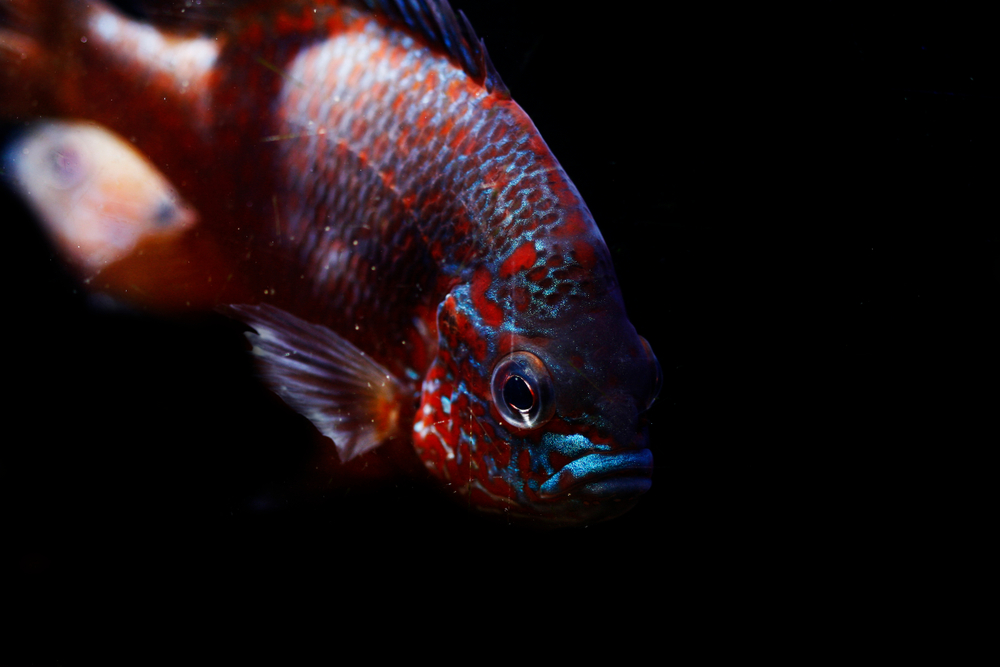 Native to eastern North America to Mexico, the longear sunfish is possibly the most unique of all the sunfish species on our list. This is a colorful species with a yellow belly, rusty-brown and olive back, and a rounded square-like side profile.

Longear sunfish are most commonly found in streams and are mostly inactive during the night.

Distinctive features: The opercular flap is elongated and dark that looks like a long ear, hence the name. 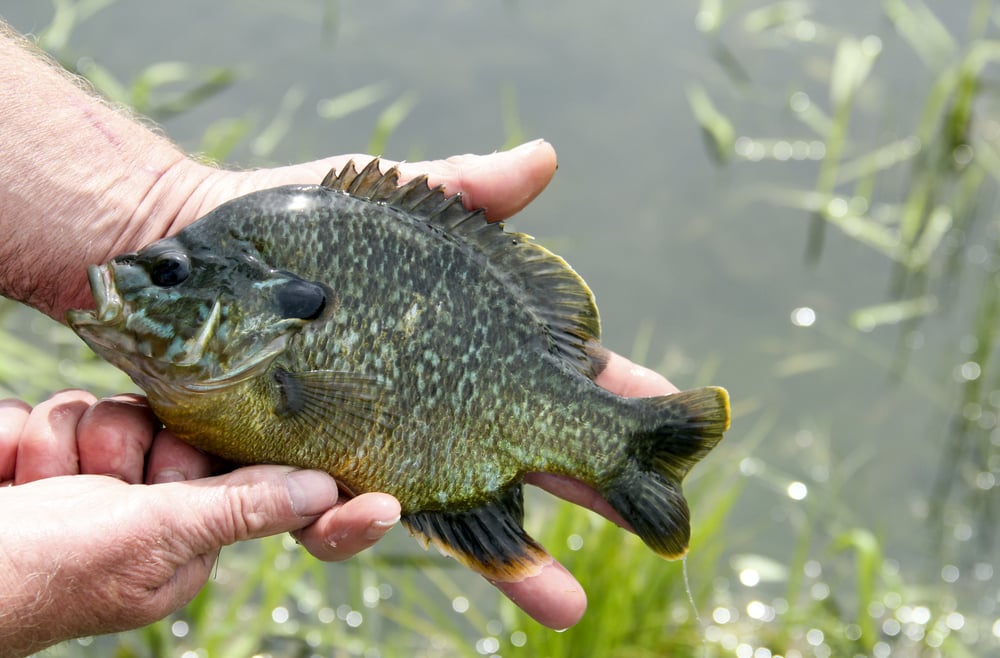 Warmouth sunfish are native to the Great Lakes and the Mississippi River, but unlike other sunfish, they aren’t present outside these areas. This is a hardy and aggressive species that are mostly golden and brown with red gill flaps. They also have red eyes, big mouths, and a short pectoral fin.

Distinctive features: As well as their red eyes, male Warmouth sunfishes have a red spot on their rear dorsal fin.

These are only the seven most common sunfish in North America, but there are countless other freshwater species within the sunfish family.

Almost all sunfish are most popular amongst anglers of all skill levels because they are very likely to bite onto bait or lures, making them an easy catch. Plus, they make a great meal or addition to an aquarium!