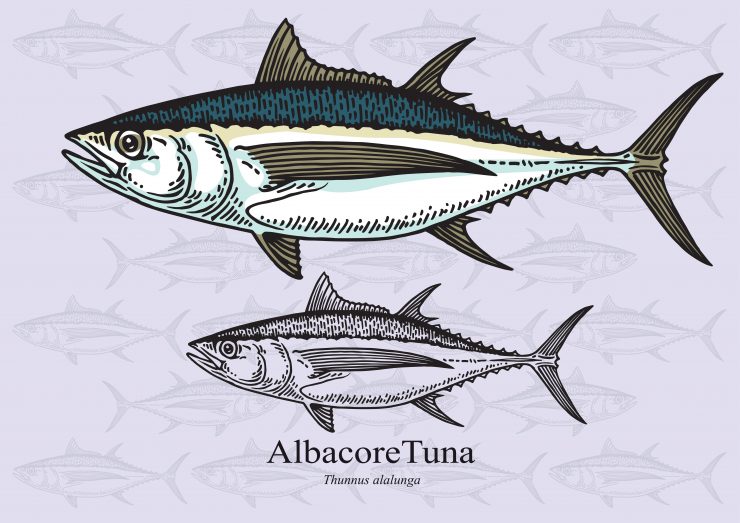 The Albacore tuna belongs to the Thunnus genus and may also be known as Pacific albacore, longfin tuna, and German bonito. Here’s everything you need to know about Albacore tuna.

Albacores may grow up to 4 feet long. They have slight genetic differences depending on whether they live in the Atlantic, Pacific, Indian, or Meditteranean. They can swim as much as 50 miles per hour. They swim with their mouths open in order to breathe.

Albacores have bullet-shaped bodies, cone-like snouts, and large eyes. They are also called, Longfin Tuna, because their most distinctive feature is the long pectoral fins, which may be up to half their entire body length. Young or small albacores may have slightly shorter fins, making them easy to confuse with young bigeye tuna, who also have longer-than-average pectoral fins. The main difference is bigeye tuna fins are rounded, while albacore fins are pointed at the tip.

Albacore tuna is a highly sought-out fish. They have a long history of commercial fishing, which began in the early 1900s. They were the first tuna to be commercially fished specifically for canning. In some parts of the world, they are now considered to be overfished. They have also been targets of pirate fishing.

In order to combat depleting fish sources, several worldwide and national organizations have stepped in to create more sustainable albacore fishing practices. Some of these organizations include the National Marine Fisheries Service (NMFS), the Marine Stewardship Council (MSC), and the International Seafood Sustainability Foundation (ISSF).

The world record for largest albacore tuna ever caught is 88 pounds, 2 ounces.

Albacore tuna live around 12 years, reaching sexual maturity around age 5. Spawning season is usually from November to February but may vary depending on location. Female albacores may lay up to 3 million eggs in each spawning cycle. Eggs hatch within a day or two and the young fry grow quickly.

Young albacores stay in the area where they were spawned for about a year before beginning to migrate. After that time, they will usually join a school. They tend to school by size and life cycle stage and rarely mix with other tuna species.

Albacore tuna are found worldwide in the Atlantic, Pacific, and Indian Oceans as well as the Meditteranean Sea. They prefer temperate waters but may rarely be found in tropical regions. They usually stick to waters ranging from 50-77 degrees F. In some regions, they may dive up to 2,000 feet below the surface.

Albacore tuna is an important predatory species. Their favorite food appears to be cephalopods such as squid and octopus, but they also eat fish and crustaceans. Interestingly, it appears their taste may change over time. Though they feed mostly on squid when young, older albacores may transition more to fish such as saury, rockfish, lanternfish, and anchovies as they age.

The main threat to albacore tuna is overfishing. In some parts of the world, they are considered overfished, and extra steps must be taken for the population to begin to recover. Albacore population has generally been declining over time, and the species is now considered “near threatened.” This means that it is not yet endangered, but it will eventually become so if steps are not taken to protect it.

Albacores rarely travel close to shore. One of the best methods for recreational anglers is to catch them by trolling. Use a variety of artificial lures ranging in color, size, and shape. Crankbait plugs are especially useful. Fishing in the morning and evening is the best time to catch albacore closer to the surface. If you’re fishing during the middle of the day, keep your lures lower in the water.

Check for local regulations before fishing for albacore. For recreational purposes, they may be caught by hook and line, spearfishing, and bow and arrow angling only. Commercial fishers often use a purse seine to catch albacore tuna.

There is a large recreational fishery in the Pacific Ocean off the coasts of California, Oregon, and Washington. There are also specific fishing stocks in the Pacific, Atlantic, and Indian Oceans, as well as the Meditteranean Sea. When fishing off the Pacific coast, the best season for catching albacore tuna is in late summer and early fall–specifically, August and September.

Though albacores can dive deep, they are most often found in surface waters between 60 and 66 degrees F. They especially like to congregate near areas of convergence, where warmer and cooler waters mix. They tend to school around floating objects such as sargassum weed.

Besides skipjack, albacores are the most common tuna species used in canned tuna. They are also a popular fish choice in sushi. If you don’t care for raw fish, albacore may be eaten seared, broiled, or grilled. Albacore meat is used in lots of different recipes. It pairs well with salad, rice, and fruit.

However you like your tuna, albacore is a tasty and popular choice. Its fleshy white meat will go along nicely with almost any side dish.