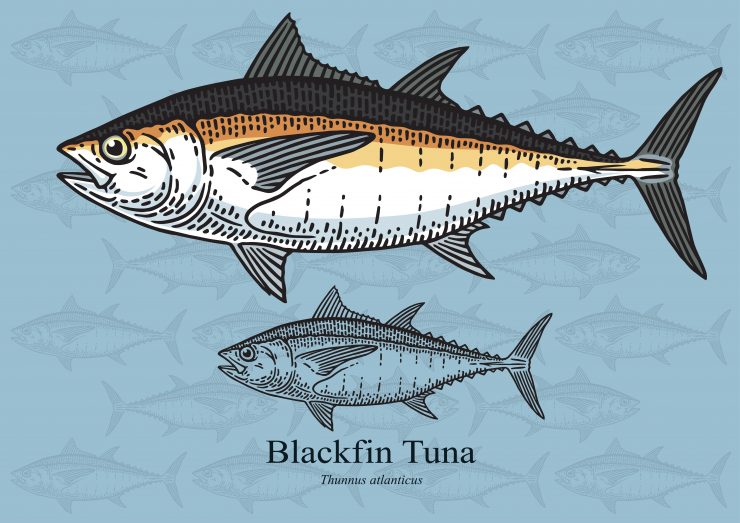 The blackfin tuna is the smallest member of the Tunnus genus. Here’s everything you need to know about this unique member of the tuna family.

The blackfin tuna is relatively small compared to other tuna, reaching a maximum length of 39 inches and rarely exceeding 40 pounds in weight. On average, they are 16-20 inches long and weigh 7-10 lbs. They are primarily silver in color with a black swath along the length of their back and some yellow markings on their fins and sides.

Blackfin tuna are easy to identify by their small size and distinctive black and yellow markings. Younger fish may be more brightly colored, with the yellow markings appearing more gold and their black backs easily noticeable against their bodies’ silver. Older fish, however, may be duller in coloring and, thus, more challenging to identify.

Blackfin tuna have been fished in the western Atlantic for as long as their native waters have been fished. They have been exposed to boats for long enough that they have learned not to get too close, but at the same time, they may be found trailing boats that fish for blackfins’ natural prey, such as shrimp and other small fish.

The world record for the largest blackfin tuna is 45 pounds, 8 ounces.

Blackfin tuna have a short lifetime, reaching maturity around two years old and usually dying after five years. They spawn during the summer months in the Gulf of Mexico and between April and November elsewhere in the western Atlantic.

Blackfin tuna are highly prolific and may spawn several times within a single season. Female blackfin tuna may lay as many as 500,000 eggs each time.

Blackfin tuna prefer warm waters of over 68 degrees F. They can only be found in the western Atlantic Ocean, ranging from the Massachusetts area south to Rio de Janeiro, Brazil. They are prevalent in the Gulf of Mexico and around the Caribbean Sea. They prefer the seaward side of the continental shelf, so they often stick to deeper waters.

Blackfin tuna thrive in tropical regions and will migrate to warmer or colder waters depending on the season. Despite their migratory habits, they always stay within the limited range of the western Atlantic.

Blackfin tuna have a fairly diverse diet; they will eat many different kinds of fish, shrimp, crabs, squid, amphipods, and stomatopods. They often mix in with schools of skipjack tuna when hunting. Blackfin tuna eat by straining their prey out of the water or by chasing prey and capturing it.

Blackfin tuna is not an endangered species and is classified under “least concern” for conservation purposes. It is a good choice for fishing since it is highly prolific and widespread throughout the western Atlantic.

In the wild, blackfin tuna are preyed upon by typical ocean predators such as marlins, dolphinfish, and even their fishing buddies, skipjack tuna. They may also be hunted by terns, shearwaters, frigate birds, and other seabirds.

Blackfin tuna are aggressive biters, and they fight hard once they’re hooked. They also have excellent eyesight and are smart enough to avoid going near the line if they can see it. Though they present quite a challenge to catch, they have a mouthwatering flavor that makes catching them worth the challenge. Plus, if you’re a more experienced fisher looking for a challenge, catching blackfin tuna may give you all the thrills you’re looking for.

Trolling and live baiting are two of the best fishing techniques to catch blackfin tuna. Trolling lines should be at least 50 yards behind your boat, as blackfin tuna tend to stay away from boats. Your hooks and lines should be small but strong, so the tuna won’t see them but won’t be able to break them once they’ve been snagged.

Pilchards, herring, and sardines are all good bait choices. Blackfin tuna typically stays pretty far below the surface, as their eyes are adapted to handle low-light conditions well. The best times to catch blackfins are early morning and late afternoon. During these times, they’ll be more likely to be closer to the surface.

You can find schools of blackfin tuna almost anywhere throughout the western Atlantic. They tend to move around a lot and aren’t likely to stay in one area for long, so it can be difficult to predict where you’ll find them on any given day. Some good places to look include areas where the ocean floor is pocked with mounds, around shipwrecks, near currents rips, and in coral reefs.

Blackfins are most likely to congregate in areas where they can expect to find food. They have been known to swim behind shrimp boats looking for easy prey. Oil rigs may also provide a focal point to draw in blackfins looking for crabs, shrimp, and other small prey.

Blackfin tuna doesn’t store well, so it should be eaten within a short time of being caught. Once you catch a blackfin, bleed it right away and then keep it on ice or in cold saltwater until you can clean it.

When you’re back in your kitchen, there are a number of different ways to prepare the fish for eating. You can eat it raw in a dish called ceviche, in which the fish meat is cured in a citrus-based marinade.

If you’re not comfortable eating it raw, you can also grill, boil, sear, or bake it. Blackfin tuna pairs well with barbecue sauce, avocado, mango, and citrus. It goes well with almost any side dish you can think of.

Regardless of how you choose to prepare it, blackfin tuna is a tasty fish that’s made all the better by the challenges involved in catching it.