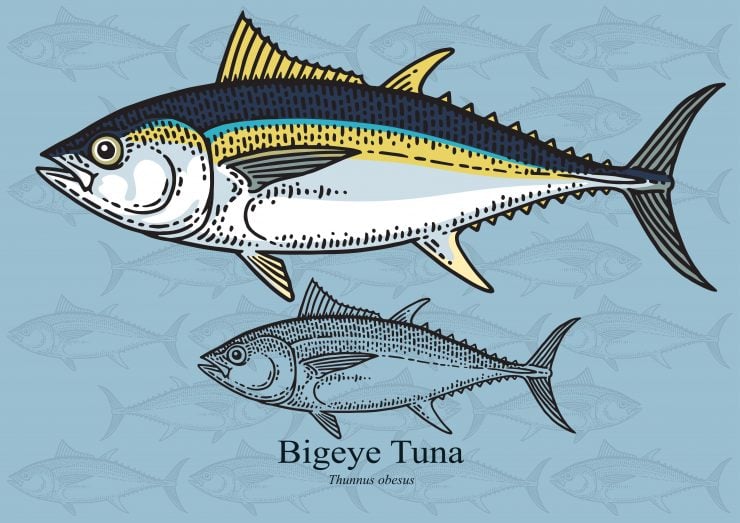 There’s a large variety of tuna species in our oceans. Many of them are difficult to tell apart from the other species.

The Bigeye tuna is a popular open water fish that shares many similarities with its cousin, the Yellowfin tuna. From big game fishing to the culinary arts, there are many reasons to become acquainted with this tuna.

To learn more about the Bigeye tuna, keep reading.

About the Bigeye Tuna

The Bigeye Tuna (Thunnus Obesus) is named for its large eyes. These fish are characterized by their long, smooth body and dark metallic blue markings. In Hawaii and parts of the Western and Central Pacific Ocean, Bigeye tuna is one of the two tuna species of tuna referred to as “Ahi.” Bigeye tuna is one of the largest tuna species. Juvenile Bigeyes are around 50 cm long, and they will grow up to five and a half feet.

Bigeye tuna are critical to the commercial fishing trade, and you can find them marketed as both fresh and frozen. Despite being both a source of income and food, the Bigeye tuna is subject to overfishing from purse seine fleets and longline commercial fishing. Their population status has become a vulnerable, near-endangered species, in need of conservation management.

Additionally, the Bigeye tuna serves as a keystone species as they are one of the top predators. They help maintain balance in the oceans, which is why it is crucial to protect them and utilize more sustainable fishing and farming practices.

How to Identify Bigeye Tuna

In the Hawaiian marketplace, both the Bigeye tuna and Yellowfin tuna are referred to as “Ahi” because they’re so similar. Though related, the Bigeye tuna has plenty of characteristics that separate it from the other tuna species.

For the inexperienced eye, the coloring alone may not be enough to distinguish between the Bigeye and the Yellowfin tuna. Another distinguishing factor is the fish’s size. Bigeye tunas are much larger than their Yellowfin counterpart but significantly smaller than the Bluefin tuna.

Lastly, the fish’s most distinguishing characteristic are their large, black eyes. 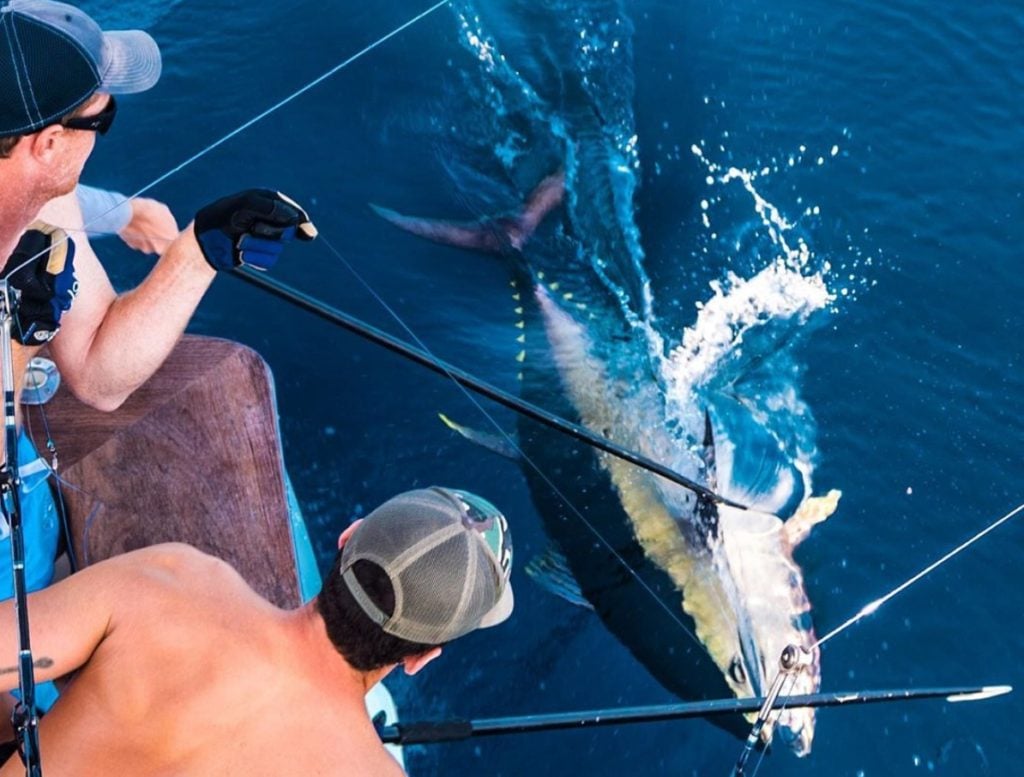 Much like sharks and other large predators of the deep sea, tuna fish, in general, are thought to have been around for millions of years.

While the modern world popularity of the large, meaty fish began in the 1950s and increased drastically in the 1990s, tuna fishing isn’t necessarily new. Aristotle spoke of tuna in his History of Animals in 350 BC, and there’s plenty of evidence of deep-sea fishing from over 4,200 years ago.

Canned tuna was brought to the market in the very early 1900s. In 1950, Portuguese pole-and-line fishers became the first to target the Atlantic Bigeye tuna. Of course, all types of tuna, including Bigeye tuna, have been prized by the Japanese long before the 1900s—and long before the commercial fishing industry took off.

The most massive Bigeye tuna ever caught on record weighed 392 lbs and six ozs and stretched to about 18 ft long. This tuna was caught off of the coast of the Spanish island, La Gomera. The title is held by 15-year-old Stanley Gillies, who reeled the Bigeye in on May 18th, 2020. This beat the previous record-holder by nearly 100 lbs.

Bigeye tuna are fast growers and typically live between 9 and 15 years. By the time they’re three and a half years in age, they’ve reached their sexual maturity and will begin spawning.

They grow to large sizes around 5 feet in length.

These fish are capable of spawning year-round; however, they most commonly spawn during the summer months. The female Bigeye will release between three and six million eggs each time she spawns. You can expect Bigeye tuna to spawn a minimum of two times per year, and they’ll return to the same spawning site each time.

You can find Bigeye tuna in the tropical and subtropical, warm waters of the Atlantic, Pacific, and Indian oceans. These fish are highly migratory and travel long distances, inevitably overlapping territory with other tuna and pelagic fish species.

Bigeye tuna prefer waters between 62 and 68 degrees Fahrenheit and can be found at depths between 50 and 500 meters, averaging around 300 meters throughout the day.

Bigeye tuna are close to the top of the food chain. As juveniles, Bigeye tuna feed primarily on zooplankton. As they get older and become bigger, they’ll begin to eat whatever they can fit in their mouths.

Humans are, in fact, the biggest threat to the Bigeye tuna.  Longline fishing and purse seine vessels for commercial means in the Atlantic Ocean have pushed these tuna fisheries into conservation measures from groups like NOAA and other fisheries management groups.

Unless sustainably managed, the Bigeye stock in the Atlantic and Eastern Pacific Ocean could be pushed to dangerously low levels.

Bigeye tuna is a favorite among sashimi and sushi eaters. Therefore, they are largely stocked in the Asian markets as well as around the world. Overfishing is increasingly becoming a threat to the Bigeye tuna as their populations are currently in decline.

How and Where to Catch Bigeye Tuna

Bigeye tuna are open water fish, which means you can only catch them 200 meters offshore by boat. As migratory fish, you’ll find them along their routes of the Atlantic—from Nova Scotia to Brazil—the Pacific and the Indian oceans.

The best way to catch Bigeye tuna is by long-line fishing or trolling at night. The best times to fish for Bigeye are during low-light, specifically as dusk sets in and right before dawn. Their preferred bait is herring, and you better be ready to put up a fight because Bigeyes are a tough catch.

How to Eat Bigeye Tuna

Bigeye tuna is an excellent source of extra lean protein, vitamins, minerals, and omega fatty acids. With their high-fat content, they’re a preferred fish in sashimi preparations and perfect for grilling.

Bigeye tuna have a firm texture with a mild flavor, making them versatile in dishes. Besides grilling and eating them raw, you can sear, broil, poach and sautée Big eye tuna with your preferred seasonings, marinades, and other accompaniments.