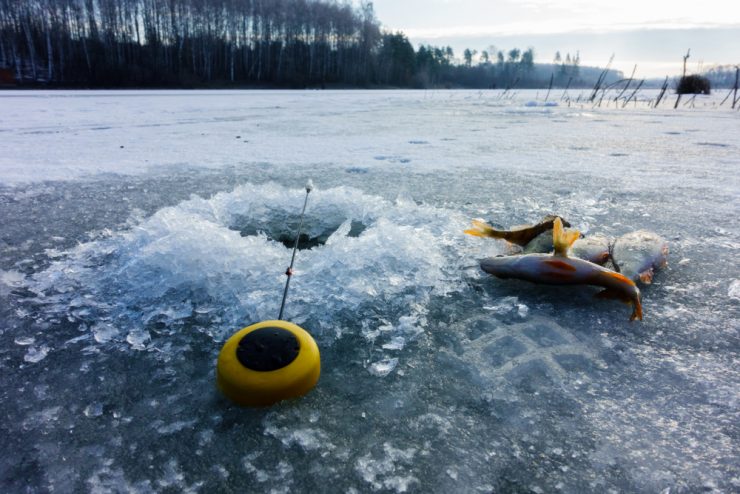 Where to Find the Best Ice Fishing Lakes in Michigan

You’re waking up before the sun with the biggest smile on your face. As you pack your car or truck with gear, the frigid weather only makes you happier. Why? It’s ice fishing season in Michigan again!

Michigan is known as the Great Lake state, and the name doesn’t disappoint. Though the actual Great Lakes that line the coast in the northern part of the state might not entirely freeze over, the others inside the border offer tremendous opportunity for a perfect day of ice fishing.

Sometimes people have trouble making a decision when there are so many great options. So we did you a favor and compiled a list of the best places for ice fishing Michigan has to offer!

In the heart of Wexford County right by the town of Cadillac lies two lakes connected by a canal. There are multiple different hotels and resorts along the coast of these lakes, offering competitive prices and amenities for lodging. Lakes Mitchell has large populations of panfish like bluegill, crappie, yellow perch, and multiple different types of sunfish. Lake Cadillac is mainly known for its population of perch.

Each lake has its benefits and downsides. If you want to catch more fish for catch and release fun, then Lake Mitchell is for you. The shallow waters of Lake Mitchell also make for near guaranteed safety on the ice because of how quickly it can freeze over. If you are trying to catch larger fish, then Lake Cadillac should be your destination.

This 9,600-acre lake located in Roscommon county can be up and down in terms of fishing success, but when it’s up,  you’re bound to have a very successful trip. Generally, this lake doesn’t fully freeze over until mid-January, which leaves a smaller window for ice fishing than most of the other lakes.

Higgins Lake is filled with lake, rainbow, and brown trout, and they are generally located in the shallower waters. Perch are highly present in the lake as well, so make sure you come prepared with the ice fishing equipment to take home a ton of different fish!

Houghton Lake is a great place for ice fishing. It’s a lake that generally freezes over by the second week of December and lasts until mid-April, which gives anglers and nice long window. With a size of 20,000 acres, it’s the largest inland lake that Michigan has to offer and is filled with bluegill, sunfish, crappie, and walleye.

For the best chance of success early in the season you have to try on the southern side of the lake in the shallow weed beds but as the season progresses you definitely should spread out all across the lake!

One of the deeper lakes in Michigan that still tends to freeze over by Christmas is Hamlin Lake. Created by damming the Big Sable River, this reservoir is a prime location for some ice fishing.  Hamlin Lake is filled with large bluegills and northern pike.

This is a popular spot, which makes fishing near the first ice the best time to go. As the season continues it does become more difficult to find schools of fish. This lake is a classic example of that old saying “the early bird gets the worm.”

One of the best places for walleye fishing in the state, Saginaw Bay on Lake Huron is an incredible location. The first freeze is generally in mid to late December and the ice stays safe to fish until mid-March. Like most other lakes, the best time at Saginaw for fishing is during the early morning hours or late afternoon.

With the proper equipment and some experience, you can definitely find really good spots at any hour. If you are having trouble finding fish in the bay, in the later winter months the Saginaw river might be a good option for you to check out.

Tons of walleye tend to flow out from the bay into the river which may lead to some success if you are having a rough day on the ice.

A few miles from the Detroit metro area is Cass Lake, a 1280 acre lake with plenty of potential for a promising day on the ice. Anybody who is looking for a quick getaway from the hustle and bustle of city life, this is the place for you.

The first freeze is generally around mid-December and lasts until the end of the ice fishing season. Filled with jumbo perch, crappies, and bluegills, you’ll have plenty of chances to cook some fresh dinner later that night. There are even chances of you snagging some large walleye as well as northern pike.

Ice fishing in Michigan is a treat that every angler should experience at least once in their life. Nearly every lake has places for lodging and restocking nearby, and the fish are extremely active.   Try fishing with jigs or spoons.

Regardless of the lake you choose to visit, the only way you’ll have a less enjoyable day will be based on the gear you use. To avoid any problems, make sure you click here to check out all the ice fishing gear we have reviewed for you!