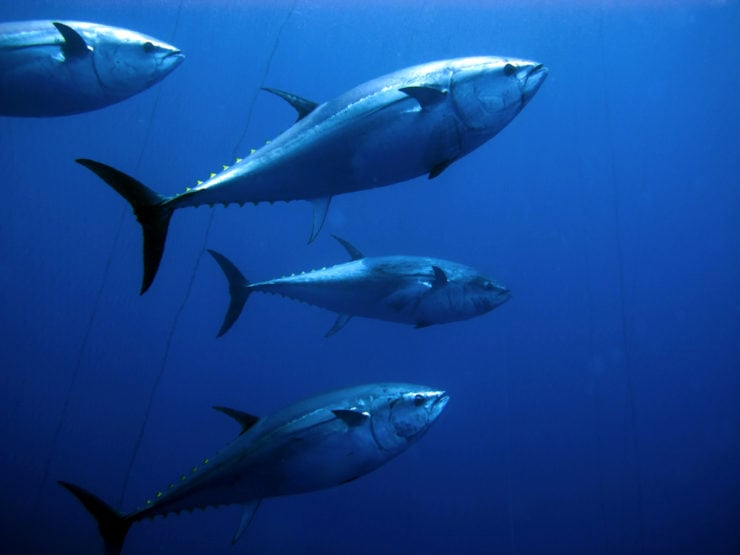 Bluefin tuna is the largest tuna species and makes for some of the most impressive catches of all time. The world record bluefin tuna catch occurred nearly 40 years ago. As the years go by, it looks less and less likely that anyone will break this record. It was a jaw-dropping catch. Ken Fraser and his crew caught the fish on October 26, 1979.

To find out why this catch has stood the test of time, let’s learn a little about what makes Bluefin tuna so special.

Tuna is a complex fish that encompasses several different species. In total, there are 9 species of tuna. Therefore using the term “tuna” may cause some confusion among fishing enthusiasts.

It is always a good idea to refer to the species when speaking of tuna.

What makes the bluefin tuna so special is the majestic look of the fish. You’re probably wondering, how big are tuna? This specific species is known for size and power. Bluefin tuna size can vary. On average, bluefin tuna reach a length of 6.5 feet and a weight of 550 pounds. When answering the question how much does a tuna weigh, one can think of a full grown pig.

The average tuna size is nothing to scoff at. If you’re having trouble envisioning this monstrous fish, keep in mind that the average human being weighs 200 pounds and is 5.9 feet tall. In addition the world’s biggest fish ever caught weighed 1,496 pounds. Possibly more impressive than their size is the species’ lifespan. How long do tuna live? Well, Bluefin tuna can live for up to 35 years. Some even succeed in surpassing this number.

You’re probably wondering how this is possible. Very few wild animals share a similar lifespan. Bluefin tuna are not like other fish. They have specialized anatomy, which allows for superior navigation in cold water. This special trait is a unique blood vessel structure. Unlike most fish, Bluefin tuna are warm-blooded. Due to this trait, they can keep their body temperature higher than the water they swim through.

This technique is called thermoregulation. These giant bluefin tuna are known to be excellent swimmers. Their biological makeup is part of the reason why. This factor, coupled with their raw power and speed, has earned them the nickname torpedo fish. With retractable fins, these fish can hit high speeds.

Types of Bluefin and Where to Find Them

There are three types of Bluefin tuna whose names come from the geographic locations they inhabit. The species of bluefin include Southern, Atlantic, and Pacific. Atlantic is the most well known and thus the most fished for of the three types. However, catching bluefish is no easy task.

With their superior builds, it’s no surprise that these fish will cause some problems for anglers. According to the International Game Fish Association, Ken Fraser holds the record for the biggest bluefin tuna ever caught. Fraser set out to sea with captain Eric Samson. Once the pair made contact with the world record tuna, they knew they were in for something special.

It only took Ken 45 minutes to haul the biggest tuna ever caught. The famous catch took place out of Port Hood, Nova Scotia. What’s truly impressive is that this took place in 1979, and nobody has been able to beat it since.

Fraser’s largest bluefin tuna catch weighed in at a whopping 1,496 pounds. How big do tuna get on average? Definitely not 1,496 pounds. Thanks to Fraser we now know the answer to the question, how big can tuna get. A bluefin tuna of nearly 1,500 pounds is frightening to envision.

It’s about half the size of the largest fish ever caught. It begs the question, how does one catch such a large fish? That is something only Ken Fraser can answer. Only time will tell if this bluefin tuna record will stand as the world’s biggest tuna catch.

Bluefin tuna are incredibly difficult to reel in. A power-swimming trait is not the only factor that contributes to a difficult catch rate. The species is constantly on the move. The tuna does not have a choice in this matter. Interestingly enough, bluefin tuna cannot receive oxygen from water while stopped. The tuna must constantly swim to survive. This requirement allows for the bluefin tuna to build incredible endurance, making them a tough catch.

Thanks to their diet, Bluefin tuna achieve incredible sizes. These giant tuna are constantly snacking. Their diet consists of squid, eel, herring, and mackerel. Due to their ability to be such fast swimmers, there is nothing the bluefish tuna cannot capture.

Although stranger things have happened, Ken Fraser’s biggest tuna caught record isn’t likely to be broken. Due to several circumstances, we know that the bluefin tuna species is a highly endangered one. Let’s dissect some factors that contribute to the bluefin tuna’s current state.

Simply put, bluefin tuna is delicious. The fact that this species is considered a delicacy does not bode well for its long-term welfare. According to the International Union for Conservation of Nature, Southern bluefin tuna are considered critically endangered while the Atlantic bluefin is considered endangered. These designations are linked to the fact that Atlantic bluefin is incredibly popular within Asian markets.

Economically it makes sense for fishers to seek out bluefin. A single fish has reportedly sold for 1.75 million dollars. With such profits on the line, it is no wonder the species is highly endangered. Unfortunately, these majestic fish are disappearing as a result. The sushi market is incredibly important in places such as Japan. Bluefin tuna is heavily relied upon in regards to making authentic sushi.

Unfortunately, bluefin tuna is considered to be a luxurious ingredient. As previously mentioned, the fact that these tuna are selling for exorbitant amounts has caused fishers to focus on the species with unyielding determination. Although the species is considered endangered, no regulations have been implemented to slow down the bluefin tuna hunt.

Luckily there is some good news. As a top predator in the ocean, this tuna helps balance the ecosystem. Full grown tuna of the bluefin species are deadly predators; therefore, they rank quite high on the food chain. Aside from the odd toothed whale or shark, adult bluefin tuna is not eaten by any species. The lack of predators on the hunt for bluefin is a positive aspect of preserving the species. Ultimately things could be worse.

Secondly, Female bluefin tuna yield up to 10 million eggs a year. Eggs begin to hatch only two days after being fertilized. This efficient reproduction rate is another positive sign. Of course, these factors cannot contribute to a change in IUCN status alone. However, they are a step in the right direction.

Ken Fraser’s record has reached folktale status. The catch that occurred on the waters of Nova Scotia is infamous among fishers. A 40-year-old record is nothing to scoff at. Considering the state of the species, one can only wonder if the record for the largest tuna ever caught will be beaten. Although, if natural selection is anything to go by, bluefin tuna has never been bigger and stronger than right now.