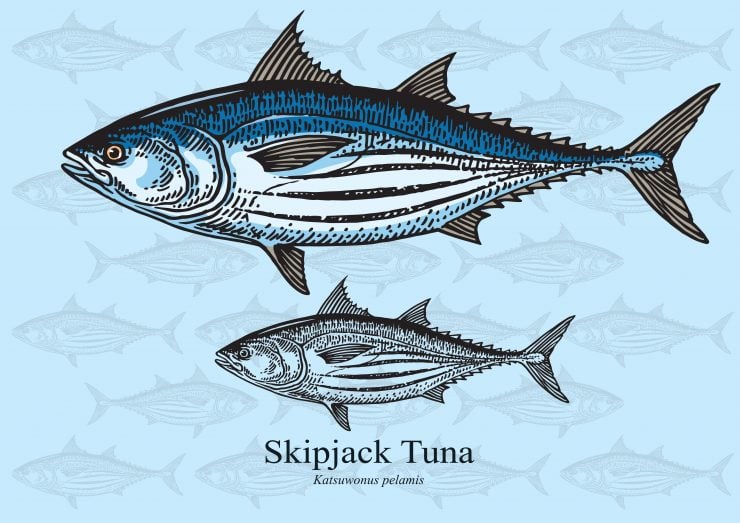 The skipjack tuna is part of the Scombridae genus and is known by many names, including balaya, ocean bonito, victor fish, and striped tuna. Here’s everything you need to know about this species of tuna.

Skipjack tuna is a medium-sized tuna that typically grows to about 3 feet long and may weigh up to 40 pounds which is smaller than other types of tuna. They only have scales on the corslet and in a lateral line running down each side of the body. They are silvery with a dark bluish-purple back and dark lines running horizontally along the sides of the body.

Skipjack tuna are strong, agile swimmers. They have extra keels and finlets and a forked tail fin. Their circulatory system is distinct from other tuna in the way it allows them to conserve heat. This nearly makes them warm-blooded.

The silvery metallic coloring and dark horizontal lines are skipjack tuna’s most identifiable features. The dark coloring on their back is another distinctive feature; however, because of their dark back and their similar size, inexperienced fishers may confuse them with blackfin tuna. Skipjack tuna have fewer scales than blackfins, and they don’t have the yellow-gold markings displayed by most blackfins.

Over the years, skipjack tuna has become one of the most commonly fished tuna species. They are typically used in canned tuna. Because they are often found swimming with dolphins, the Dolphin-Safe Tuna Tracking and Verification program was started in 2000 to protect dolphins from dangerous commercial fishing practices.

The world record for a skipjack tuna is 45 pounds, 4 ounces.

Skipjack tuna can be found in oceans worldwide, particularly in tropical, subtropical, and temperate waters. They prefer warm water temperatures between 68 and 82 degrees F. They are highly migratory fish and may travel extremely long distances in search of food and warmer waters. Though they typically feed near the water’s surface, they may be found as deep as 850 feet below the surface.

Skipjack tuna enjoys a wide variety of prey such as cephalopods, herring, mollusks, and crustaceans. During times when food is scarce, they may even eat other skipjack tuna. They often travel in giant schools hunting for prey. Sometimes they blend with schools of yellowfin, albacore, and bluefin tuna.

Most often, skipjack tuna feed near the surface of the ocean, but they may also dive down deeper in search of food. This is especially true of older fish.

Skipjack tuna are not endangered and are considered “least concern” for conservation purposes. This is probably due to the sheer number of eggs they lay, as skipjacks have plenty of predators in the wild.

In addition to being commercially fished and pursued by sport fishers, skipjack tuna is a favorite prey of sharks and other large pelagic fish, such as billfish and other species of large tuna. Skipjacks are also cannibalistic in nature and will feed on each other when food is scarce.

Skipjack tuna are popularly used as bait when fishing for marlin.

Most non-commercial anglers use trolling lines with artificial lures to snag skipjack tuna. Early morning and late afternoon are the best times to fish for skipjack, as these are the times they’ll most likely be near the surface searching for food. You may also be able to catch skipjack further beneath the surface by using longline fishing methods.

Commercial fishers typically use purse seines to capture large schools of fish at once. Often, they will use artificial floating bait to attract the schools to a specific area. Some artisan anglers still prefer to use hook and line methods.

Skipjacks are widely distributed throughout the world. Because of their migrational habits, it can be difficult to predict exactly where you’ll find a school of them, but there are areas where they will be more likely to congregate.

Because they prefer warmer waters, they can likely be found year-round near the equator. Further from the equator, they’re likely to gather more densely where the waters are warm. Skipjacks have a tendency to school near large vessels, such as fishing boats, oil rigs, or buoys. They may also school near whales, dolphins, or even sharks.

Skipjack tuna may also gather near convergences or upwellings, where the two areas of water with different temperatures collide. These areas are great feeding grounds for the skipjacks and may be a great place for catching them as well.

Skipjack tuna has the most strong and distinctive taste of any tuna species. It is popularly used in canned tuna. It is used for this purpose more than any other tuna species. It is also commonly sold fresh and frozen. The meat is light to deep red when raw and becomes gray or white when cooked.

Skipjack is good in sushi or katsuo dishes, as well as grilled, baked, or fried. It is sold dried in some parts of the world and can be eaten as jerky or reconstituted and used in cooking.

However you eat it, skipjack tuna is a popular and tasty tuna choice and one of the easiest tuna species to catch.