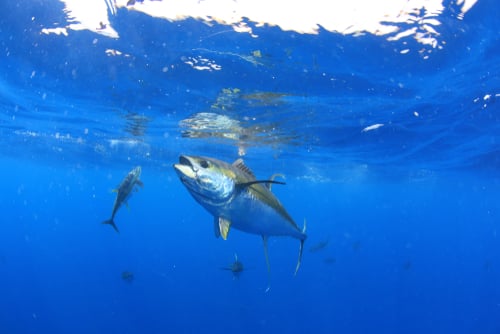 Yellowfin tuna are incredibly strong and fast fish. This is one of the fastest types of tuna and can reach speeds of up to 50 mph. These qualities have made them a top catch by sport fishers who appreciate their tenacity and fight.

Yellowfins aren’t just sought after by anglers around the world. They’re also one of the most popular types of fish to eat and are known as ahi tuna in the food world. People love their firm texture and mild flavor.

These fish can be recognized through their torpedo shape and unique coloring. Their sides and back are a beautiful metallic black or blue, and their belly switches between yellow and silver.

What sets yellowfins apart from other types of tuna is their bright yellow dorsal fin and yellow stripe down their side. 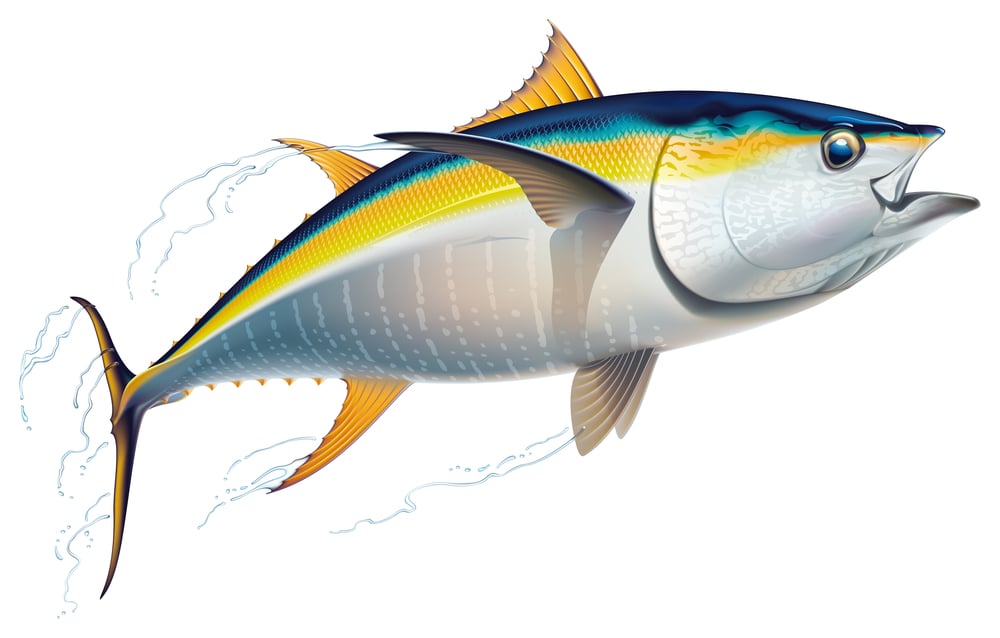 The world was first introduced to the Yellowfin tuna in 1778 when Bonnaterre described it. He named the fish Scombus Albacares, but it went through different monikers until 1953, officially called Thunnus Albacares. Since then, it has been fished for sport but became more widely used as a food source starting in the 20th century.

Yellowfin tuna are humongous fish, but one, in particular, is bigger than any other Yellowfin recorded. In 2012, John Petruescu caught an enormous 445 lb one at Hurricane Bank, Mexico. He used a 5-pound skipjack tuna as bait and reeled it in with a Shimano Tiagra LRS 50W.

Yellowfin tuna begin their lives as small larvae, only measuring a few millimeters long. These fish are fast-growing, especially compared to other types of tuna, and will be sexually mature within 2 to 3 years. Yellowfins are colossal fish and typically get up to 7 feet in length, and have an average lifespan of 6 to 8 years.

Yellowfin Tuna are epipelagic fish that live in warmer surface waters of the tropical and subtropical oceans. They can be found worldwide, but the area in which they live dictates where they migrate to each year for spawning. 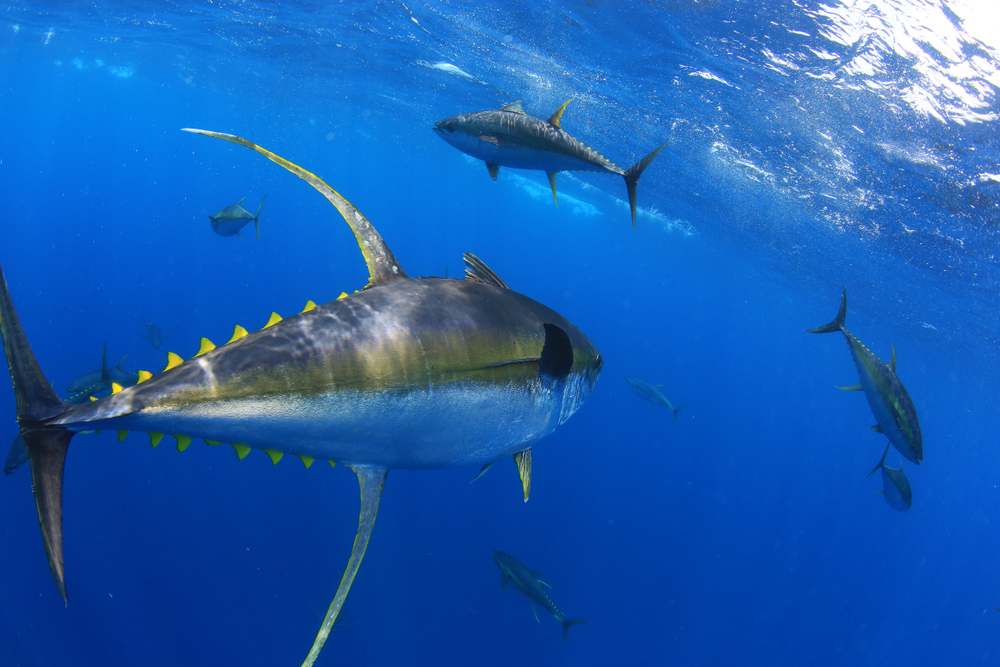 Yellowfins spawn throughout the year, but their peak is during the summer. From May to August, populations spawn in the Gulf of Mexico and change to the southeastern Caribbean from July to November. For populations in the eastern Atlantic, these tuna spawn from October to March in the Gulf of Guinea and move to Senegal offshore between April and June.

These are another type of carnivorous fish, which is common among the tuna species. They are considered to be near the top of the food chain when it comes to fish, squid, and crustaceans.

Yellowfin tuna eat everything from flying fish to cephalopods and crustaceans.

In addition to migrating to spawn, Yellowfins will also migrate to find food to fuel their voracious appetite. This is also due to seasonal changes that can affect their food source. 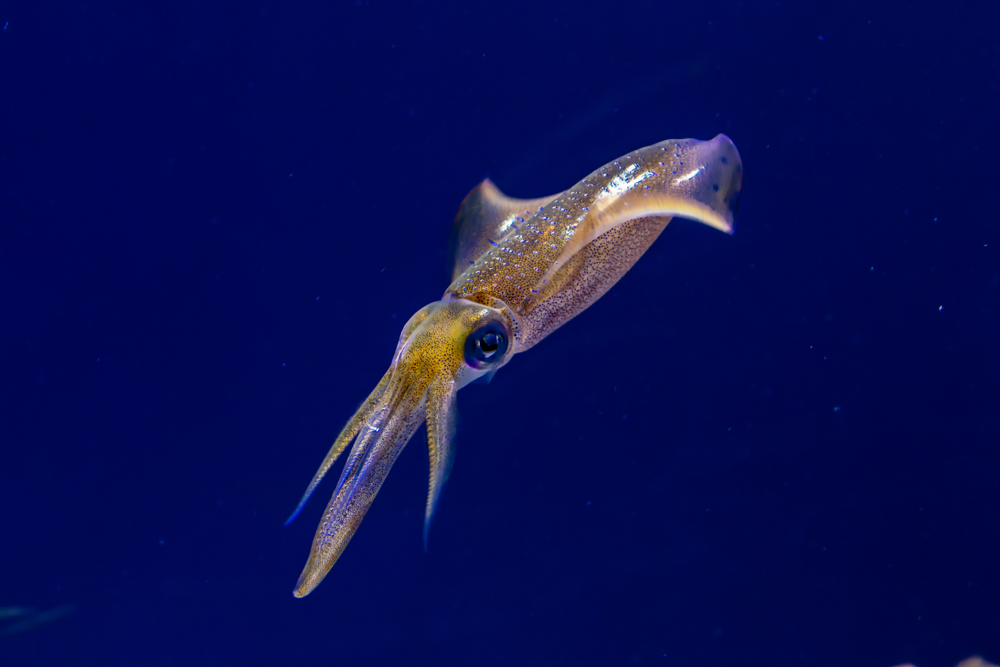 Currently, the Yellowfin tuna is classified as lower risk/least concern by the World Conservation Union. Yellowfin tuna is a sustainable type of fish, but that doesn’t mean they are immune from commercial fishing. Even though there are many healthy fisheries, this is still a threat to them.

Besides commercial fishing, Yellowfin are also popular among sport fishers who enjoy their size, speed, and fighting ability. You need a permit to fish Yellowfins, which helps preserve them. Still, they have above standard populations, so they are safe to catch.

Fishing for Yellowfin is one of the most exciting excursions you can go on. It may seem intimidating, but you can catch yellowfin tuna with either bait or trolling lures behind your fishing boat.

Live bait is particularly useful for catching tuna, including Yellowfin. Tuna have good eyesight, so it’s smart to use a fluorescent leader to lower visibility.

If you decide to use a lure instead, you can troll the fish with cedar plugs, tuna feathers, and Rapala type plugs. This is an excellent technique if you find a feeding school. For really large Yellowfin, it’s best to use fishing bait below a kite.

There are several locations around the world where you can find Yellowfin tuna. This type of fish enjoys warmer water temperatures ranging between 65 to 88 degrees Fahrenheit or 18 to 33 degrees Celsius. Some of the best locations to find them include California, Mexico, Hawaii, and the Caribbean. 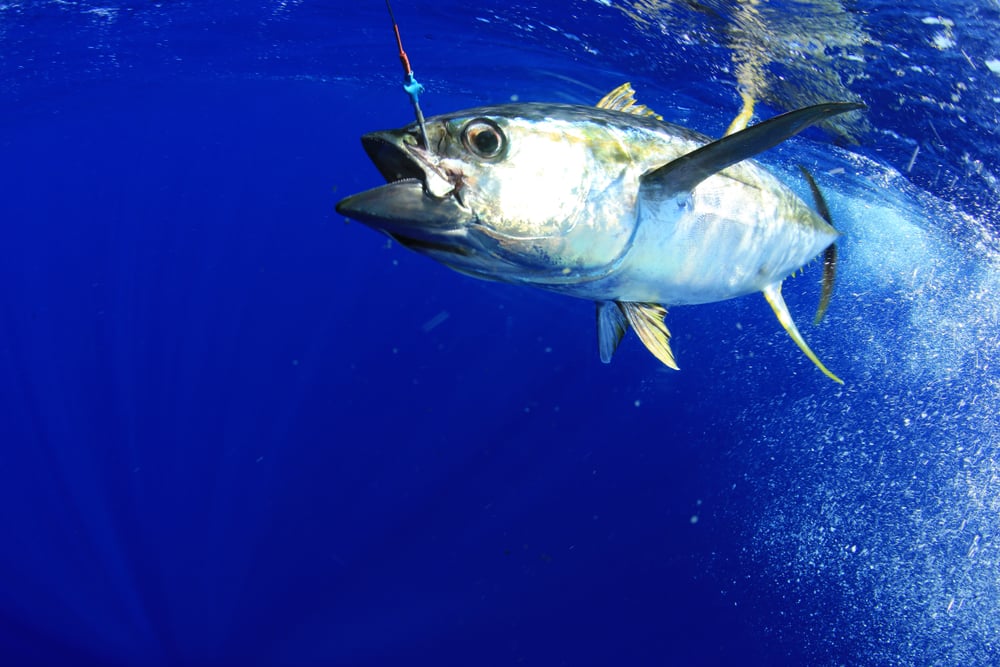 Yellowfin tuna is a delicious fish that has a light flavor, which is why it’s become a favorite for sushi and sashimi lovers. It goes excellent with Asian flavors, in general, but this is a fish that you can enjoy in various ways.

Grilling is a classic way to enjoy Yellowfin. Use either charcoal, gas, or grill pan and cook the tuna for 2 minutes on each side on medium-high heat.

Poaching involves cooking the tuna in a boiling liquid like water or oil and cooking for about 5 to 10 minutes.

Pan-searing your Yellowfin tuna will give it a nice golden crust on the outside. All you do is place the tuna in an oiled pan on medium-high heat and cook for about 1 ½ minutes on each side. 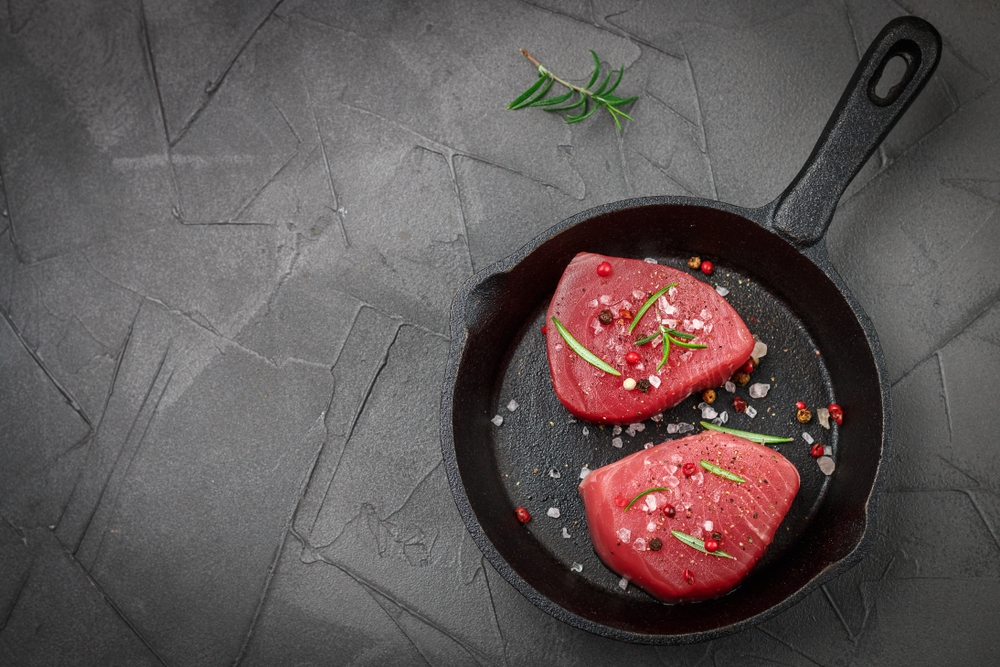 Yellowfin tuna has become a sought after ingredient in the sushi world. It’s firmness and light flavor makes it perfect for enjoying raw. However, make sure you have it prepared by a professional.

Yellowfin tuna are a sustainable food source with thriving populations. They’re not just an excellent resource to have; they’re an incredible species of fish that are beautiful and powerful.

If you want to learn more about different tuna species, stick around and read some more of our blog posts now!