Can You Eat Lake Trout?

Lakers are one of the most popular fish to catch in North America, but can you eat lake trout? Don’t pull up your nose just yet. Read here and be adventurous. 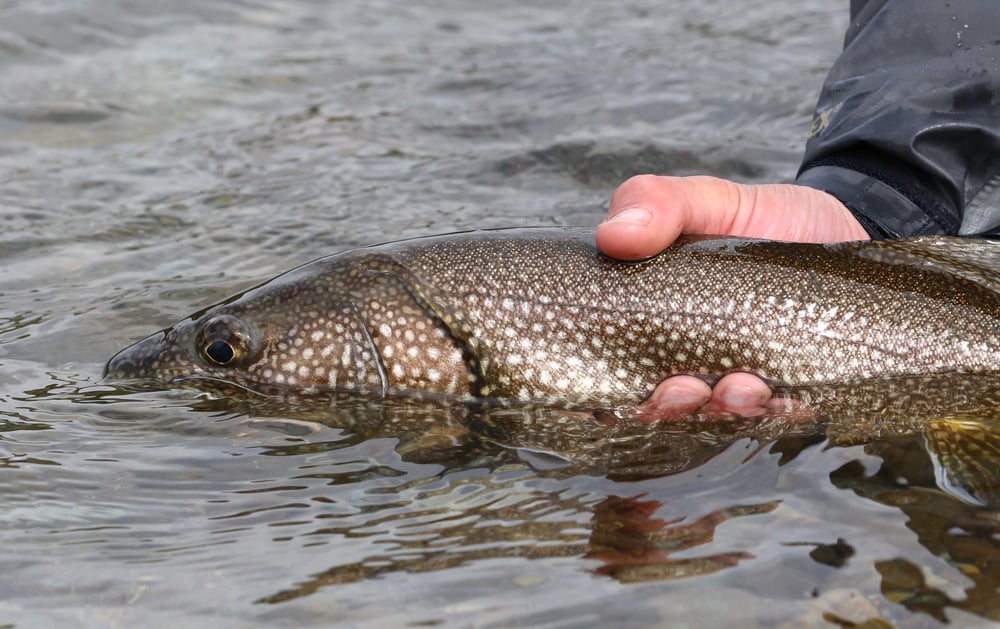 Lake trout are safe to eat if they were hooked in clean water and are not too big. Smaller lakers usually contain lower concentrations of toxic chemicals and less mercury. People always go on about how greasy and oily lakers are and how fishy they smell. Let’s bust the lake trout myth once and for all. They are good to eat, but the secret is to prepare it and cook it correctly. So, before you pull a face and listen to nonsense, try a well-prepared laker for yourself.

Lake trout have dark, grey to olive greenish scales, light, cream-colored spots, and a yellowish belly. The tail is deeply forked, and the fins are dark orange to red with narrow white edges.

How Big Are They?

The lake trout is the biggest of the chars. The average lake trout weighs around 15 to 30 pounds. The biggest lake trout ever caught was in Great Bear Lake in Northwest Territories, Canada, in 1995 and was 59 inches and weighed a whopping 72 pounds! In the US, the largest laker was hooked at Big Diamond Pond in West Stewartstown, New Hampshire, in May 2020 and weighed in at 37 pounds.

Lake trout are native to North America and found in the fresh, deep, and cold waters from Alaska to Nova Scotia and throughout the Great Lakes. This fish is a top Great Lakes predator that lives near the bottom of lakes. They are solitary creatures that hunt alone and quite difficult to catch.

Does Lake Trout Have Other Names?

This laker, or Salvelinus namaycush, has many common names and is not to be confused with the brown trout that is of a different biological classification. Lake trout are also called Great Lakes trout, gray trout, mackinaw, namaycush, togue, lake char, touladi, but mostly just laker. In Lake Superior, they call them siscowet and paper belly.

This is an oily and fishy-tasting fish, and the flesh is a reddish-orange color. Sometimes the meat is creamy or yellowish, but the firm flesh tastes delicious when someone who knows how to prepare it cooks it correctly.

Those who love lakers say the smaller ones have less fat and are really good to eat, especially baked, smoked, or deep-fried in a batter. But, you can also pan-fry them with just a pinch of salt and pepper until golden brown and then drench them in melted butter. Others call it Fishermen’s Candy, and after a hard day of fishing, they throw one on the grill and chuck some beer over it while it’s cooking.

It all depends on your taste buds. If you like raw fish, try it. We wouldn’t go there, but only because of the oily flesh and the fishy flavor.

Fatty fish like lakers can be frozen but not for longer than three months if you still want to taste that freshness. They will be fine if stored for longer, just not as tasty, but don’t store them for more than six months.

Eat lakers! They are healthy and good for you. They contain loads of omega-3 fatty acids and are an excellent source of protein, vitamins, and minerals. And even if they are a bit oily, they still have far fewer calories than a hamburger.

So, do yourself a favor and have a bite. You will be pleasantly surprised and will probably want some more.