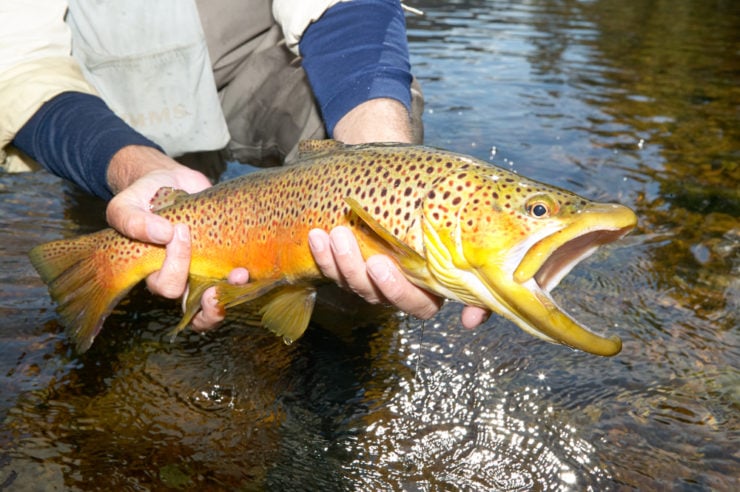 Brown trout are highly prized game fish and offer a fun challenge for both novices and experienced anglers. They are incredibly picky and may follow a lure without ever taking it. They also love to hang out in places perfect for hiding, like under logs and rocks and around trees.

This introductory guide to brown trout tells you everything you need to know about these fish, from their history to how to catch them. Read on for the facts.

Basic Facts About the Species

The brown trout is a member of the salmon family and goes by the scientific name Salmo trutta. It’s related to the Atlantic salmon, Adriatic trout, and flathead trout, among others. The fish is a Eurasian species and considered one of the most valuable exotic fish in North America. You may also hear it referred to as the “German” brown.

How to Identify a Brown Trout

You can recognize a brown trout by its olive-brown dorsally and brassy shade. The sides of the fish range from tan to yellow. On the back and sides, you may notice black or olive-brown spots. Their sides tend to be more colorful, decorated with red or orange spots. Some fish even have dots haloed with white or pale blue tones.

This trout species is considered originally a native fish to Western Asia, Europe, North Africa and as far West as Iceland. They are highly adaptable, however, and have been introduced throughout the world. You can now find brown trout on every continent except for Antarctica. Brown trout were first introduced in North America as early as the late 19th century.

Brown trout are a predatory species. They often pose a threat to other fish populations, especially when they infiltrate smaller mountain stream habitats. Brown trout will sometimes prey directly on brook trout, displacing them from their habitat, for example. In the past, they have wiped out a number of local fish populations in the Americas in this manner.

The average full-grown brown trout is 7 to 14 inches long from tip to tail. In some cases, if you’re lucky, you may spy a substantial brown trout as big as 20 inches. The world record for a brown trout catch is 42 pounds, 1 ounce. The fish was caught in New Zealand in March 2013. An angler came closer to beating the world record in 2019 when he snagged a 40-pound, 6-ounce brown trout in Lake Taneycomo in Missouri. 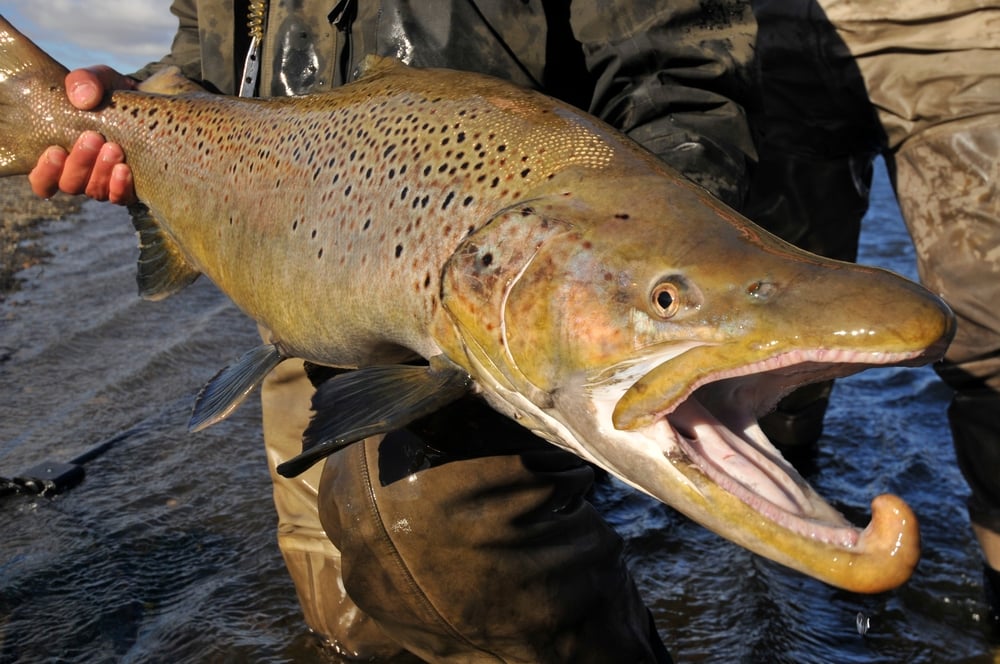 The average lifespan of a wild brown trout depends on the size of its natural habitat and the condition of the habitat — for example, whether it’s polluted. Brown trout do tend to live longer than native brook trout. On average, they can live as long as five years. In naturalized populations, however, trout have been recorded living ten years and longer.

Trout mature between one to three years of age and breed during this time. They usually breed in the fall, and their breeding cycles may overlap with those of the brook trout, which generally spawn in October and November. 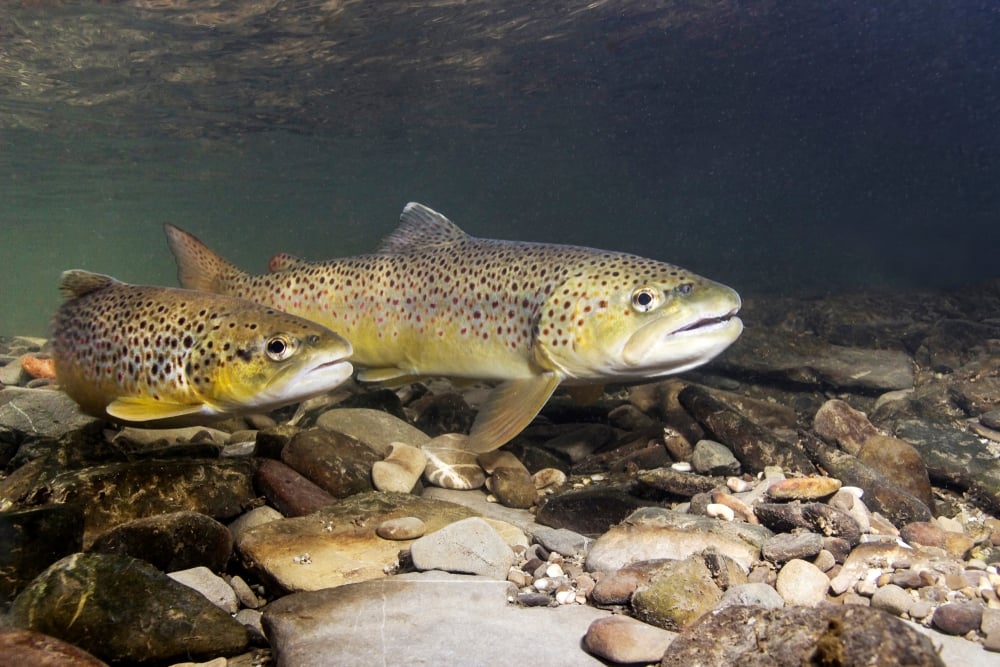 Brown trout can be found in diverse aquatic systems, from large ponds and lakes to rivers and cold water mountain streams. They can successfully colonize extensive waterways and invade upstream. They are somewhat tolerant of acidified waters. Trouts generally like running water, so look for areas with high flow rates to target when you’re fishing.

In general, brown trout are more tolerant of warmer waters than rainbow or brook trout. They can survive in water up to 20°C (68° Fahrenheit) if it’s sufficiently oxygenated, but they get slower as the temperature reaches this height. The fish tend to feed along the bottom. In general, larger trouts tend to inhabit large dam outflows and big reservoirs. The water is colder in these areas.

These bigger fish may chow down on crayfish and even other fish, including trout. Other possible meals include salamanders, frogs, mollusks, and even small mammals.  They also like salmon and trout eggs during spawning season.

Brown trout populations can be threatened by environmental factors that harm their habitats especially climate change. For example, drought can reduce stream flows to the extent that the fish can’t mate — or even dry up water to the point that the creatures perish. Floods can also prove disastrous, eliminating entire fish populations by removing them from their habitat when river or lake banks overflow.

Other animals also threaten brown trout. Water snakes, mink, herons, and kingfishers may all feed on them. They are also prey for otters. The northern water snake is thought to be the primary source of trout predation, however. 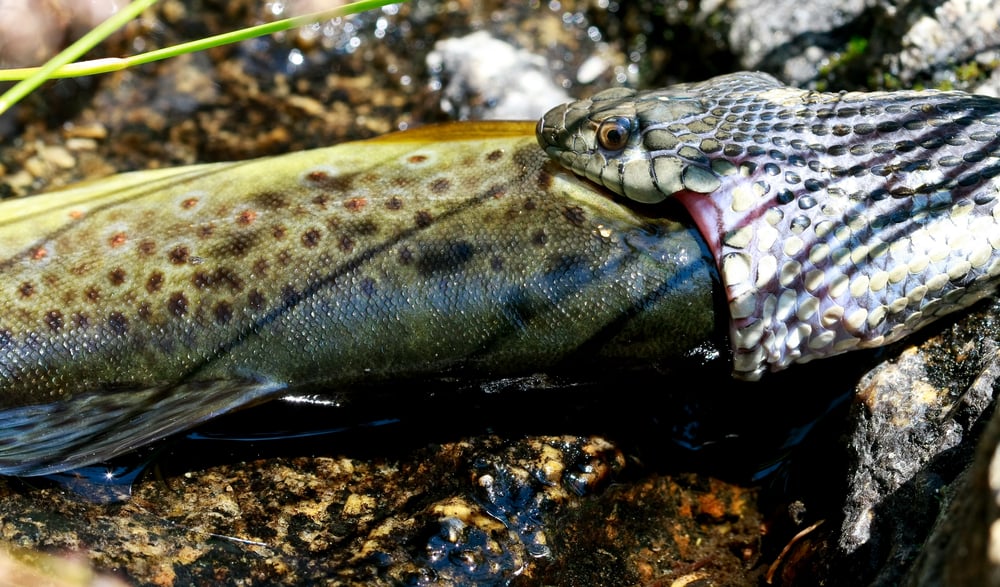 How to Catch Brown Trout

So, now you know all about brown trout. The big question is, how do you catch one? First, get your tools ready.

In terms of rod size for trout, you can opt for anything from two to seven pounds. Aim for a 1,000 to 2,500 reel. Rod length is mostly a matter of preference and won’t greatly influence your brown trout fishing success. If you plan to use a braided line, you can choose from 4 to 12 pounds. For your leader, anything between 4 and 10 pounds will get the job done.

You can use lures, flies, soft plastics, or baits for fishing brown trout. If you are using live bait, choose something that matches what the trout will see in the local waters. Nightcrawlers, worms, and minnow imitations are all great options, as are wattle grubs. Check local regulations, as some areas restrict the use of worms as bait.

If you use lures, fish with jerking strokes and large rips. This will imitate the baitfish, increasing the odds of retrieval. Last but not least, make sure to have a landing net on hand. This will make it easier to scoop the trout up.

Note that brown trouts have very soft and sensitive mouths. You thus shouldn’t set your drag too tight. Otherwise, you may lose a catch due to ripping. The key to winning a trout showdown is to take it slow and steady. Use a loose drag to wear the fish down slowly. You can then reel it in quickly. 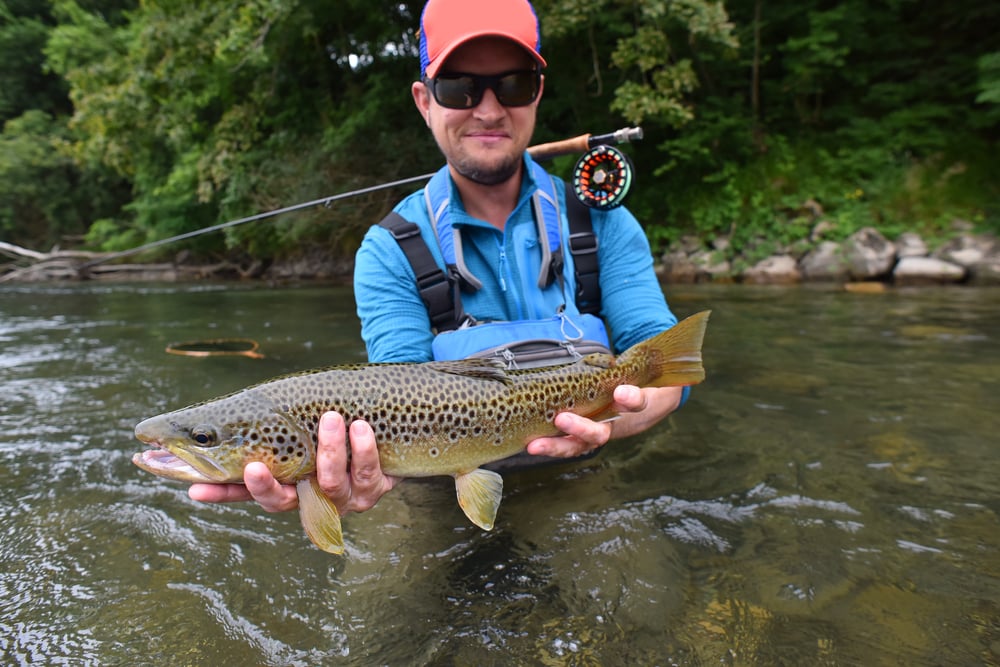 Where to Catch Brown Trout

When fishing brown trout, prioritize waters that flow towards the ocean. Estuaries and rivers are ideal. Some brown trout live in the sea and migrate from the ocean inland during the year. Most brown trout reside in freshwater areas, however, including dams and lakes. Make sure to review your local area’s angling requirements and regulations. You may need a license to go brown trout fishing, and the season may be limited.  They are a global species and you can find them in streams and rivers from New York to New Zealand to the Atlas Mountains of North Africa.

Knowing the fish’s natural habitat is only half the battle. Once you understand the behavior of brown trout, you will better understand how to catch them. If the water you are fishing experiences a lot of traffic, the fish will likely be wary. They will become more nocturnal and get very picky about what foods they will respond to.

How to Eat Brown Trout

There are many delicious ways to prepare brown trout. The fish can be broiled, seared, or fried. Trout also combines well with a variety of flavors. You can try it rolled with ham, mixed with zucchini, or simply browned with butter, for instance. If you want to show off your prize catch, you can smoke the whole trout on a closed grill.

However, the classic serving suggestion is to simply present the fish on a plate with olive oil, dill weed, parsley, and lemon. This presentation has a few advantages. First, it’s versatile. You can decide whether you want to debone the fish or present it whole. Second, it’s simple. Finally, you can prepare fish in this style over an open fire. You don’t need a kitchen. If you’re on a fishing and camping expedition, you just have to pack a few ingredients, and you’re ready. 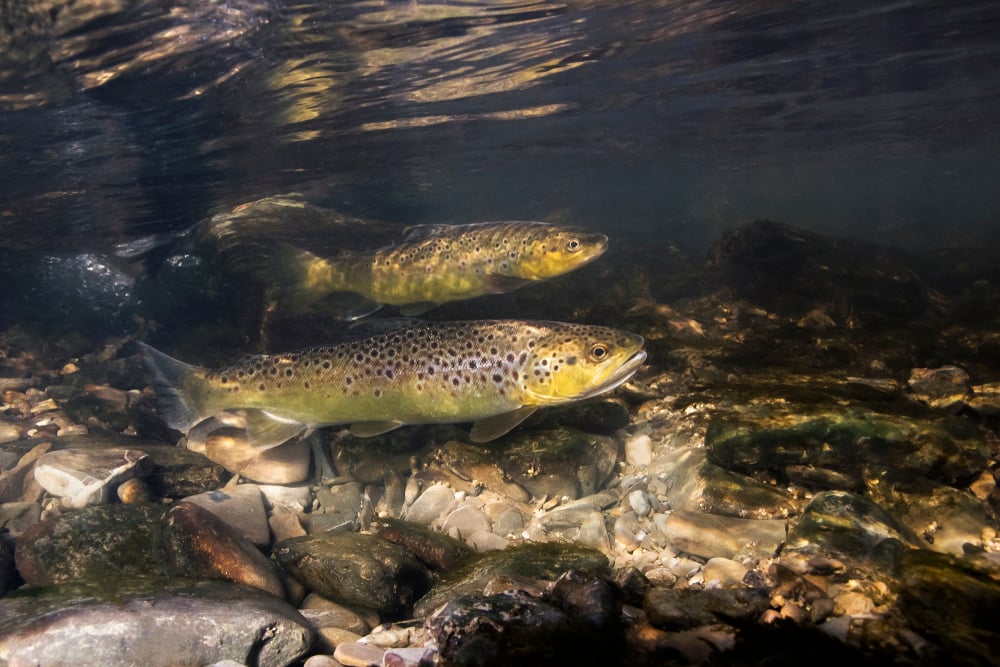 If you want some versatility in your fishing, brown trout are a great bet. These fish are found all over, from lakes to mountain streams. When the season is right, you can pursue them in the environment you most enjoy fishing in. Just keep the above information and tips in mind, and you should be able to enjoy a fun day on the water snagging brown trout.