Trout fishing is one of the most popular freshwater angling activities in Montana. Whether you are a beginner or an expert, there are plenty of locations to fly fish for trout throughout the state.

There are so many choices when it comes to rivers, streams and other bodies of water for catching world class trout in Montana. This list is some of the more popular spots and will be a good start to your Montana fishing research. 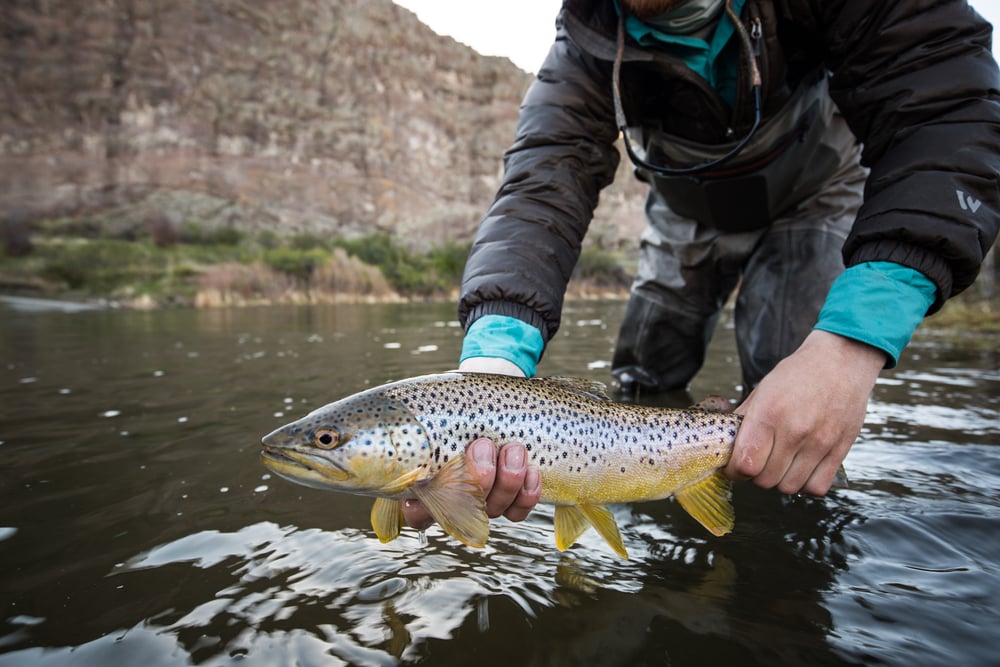 The Best Rivers in Montana for Trout Fishing

The Bighorn River is a tributary of the Yellowstone River, which runs through Montana and Wyoming. It is well known as one of the best fly fishing rivers in North America. Fishing for Trout on this river can be done from May to October with peak season being June – August.

The Bighorn River is one of the most popular fishing spots in Monatana. The river was formed by glaciers carving through the mountains and has been flowing for thousands of years. It is home to a variety of wildlife including deer, elk, moose, bear, coyotes, bald eagles and mountain lions. The water flows from Jackson Lake into Yellowstone National Park before making its way to Montana where it joins with the Missouri River at Fort Benton.

The Yellowstone River is one of the most popular fishing spots in Montana, and for good reason. The river cuts through a mountain range, making it beautiful to look at and perfect for fly fishing. While you can find many species of fish in the river, cutthroat trout is by far the most common catch here.

The Missouri River is home to some of the best trout fishing in the entire country. The river itself stretches for more than 2,300 miles and runs through 10 states starting in Montana. The river has several different species of trout that are native to the area, including rainbow, cutthroat and brown trout. Each type of trout has its own unique characteristics, but all three types have one thing in common: they can be caught on artificial lures or flies.

The Missouri River is the longest river in North America. It flows through several states and into the Mississippi River. The Missouri has a long history with Native American tribes, Lewis and Clark’s expedition, fur traders, steamboats, railroads and more.

The Ruby River is one of the most famous trout fishing rivers in Montana. The river has a long history, and it’s considered to be one of the best places for fly-fishing.

The Ruby River is a tributary of the Beaverhead River, which itself flows into the Jefferson River. The river is located in southwestern Montana and drains an area of approximately 925 square miles. It originates from snowmelt in the Absaroka Range near Big Timber Pass and empties into Beaverhead Lake by Dillon, Montana.

The Gallatin River is one of the most popular destinations for fly fishing in Montana. With its headwaters originating from Yellowstone National Park, this river is known for its trout population and abundance of other aquatic species. The Gallatin River originates from the Madison, Firehole and Gibbon Rivers as well as several smaller streams that drain into it before it flows through Bozeman and Big Sky where it eventually empties into the Missouri River near Three Forks.

The entire length of the river through Big Sky Country is scenic and offers excellent fly fishing opportunities for rainbow trout and brown trout during late spring through early fall months.

The Smith is a major tributary of the Missouri River in Montana. It begins as a small stream at the confluence of two smaller streams, Fawn and Meadow creeks, near Harlowton, Montana. The river flows westward through the Rocky Mountains for approximately , joining with the Jefferson River just south of Big Timber to form the Missouri River

The Madison River is one of the most popular fly fishing destinations in the world. The river flows through Yellowstone National Park and has a natural beauty that can’t be matched by any other stream. It also has some of the largest trout in North America, with fish up to 20 pounds being caught on a regular basis.

The Madison River is a tributary of the Missouri River, approximately 370 miles (600 km) long, in southwestern Montana. It drains an arid region east of the Continental Divide south of Bozeman and flows west-southwest to join the Missouri at Three Forks. The river was named by Meriwether Lewis after James Madison, fourth President of the United States.

The Big Hole River is a tributary of the Jefferson River, in the U.S. state of Montana. It begins at the confluence of its North and South forks near Yogo Gulch, about 12 miles south of Wisdom and flows northwest across southern Beaverhead County to join the Jefferson just east of Dillon. The river is noted for its population of wild rainbow trout as well as brown trout and brook trout which are stocked by Montana Fish, Wildlife & Parks’ Helena Fisheries Research Center (HFERC).

The Clark Fork River is a major tributary of the Columbia River, approximately 225 miles long. It originates in Yellowstone National Park and flows north through Montana to join the Columbia at Missoula. Its drainage basin is approximately 18,000 square miles large which makes it one of the largest river basins in Montana. The river’s name comes from explorer William Clark who noted its reddish clay banks while traveling upstream with Meriwether Lewis on May 25, 1805.

Fishing the Clark Fork River can be a fun and exciting experience. The river is known for its large trout population, making it one of Montana’s premier fishing destinations.

The Jefferson River is a tributary of the Missouri River, approximately 225 miles long. It originates in the Rocky Mountains near Twin Peaks and flows eastwardly into Montana where it joins the Missouri at Three Forks. The river was named by Meriwether Lewis during the Lewis and Clark Expedition after U.S. President Thomas Jefferson, who commissioned their expedition

The Beaverhead River is a river in the state of Montana, United States. It flows for approximately 220 miles (355 km) from its source near Zortman Peak to join with the Big Hole River and form the Jefferson River. The Beaverhead’s drainage basin encompasses more than 4,000 square miles (10,360 km2). The river was named by French trappers who saw large beaver dams along its course.

The Boulder River is a river in the U.S. state of Montana, about 120 miles (193 km) long. It originates near Lost Horse Mountain at an elevation of 6,897 feet (2,106 m), within the Absaroka-Beartooth Wilderness in Custer County and flows generally north past Wisdom to join the Big Hole River at an elevation of 4,823 feet (1,474 m) just east of Wisdom in Powell County.

It’s a popular destination for anglers and offers some of the best fly fishing opportunities in the country.

The Flathead River is a river in western Montana that runs through Glacier National Park. The river covers over 200 miles and has many different species of trout including brown, cutthroat and rainbow trout. It is one of the most popular rivers for fly fishing in the United States.

Flathead River trout fishing is truly an experience you’ll never forget. The Flathead River has been a popular destination for anglers since the late 1800s, and it offers some of the best fly-fishing in Montana.