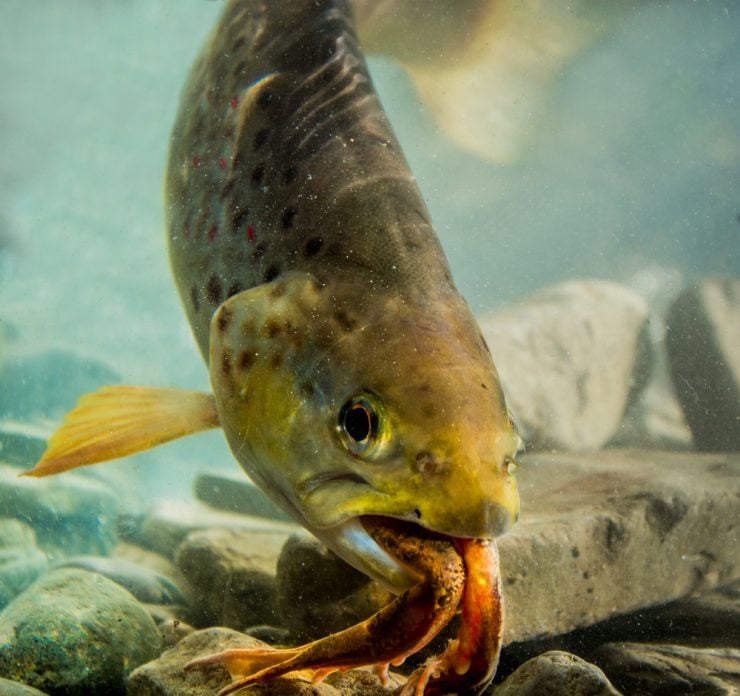 Trouts enjoy a diverse diet all year round. They’re known to snack on flying insects, worms, crustaceans, and even other smaller species of fish. Therefore, it’s not out of the ordinary to wonder, “do trout eat frogs?”

In short, yes, trout will hunt frogs at each stage of the amphibian’s life cycle. Trout are carnivorous fish, with a set of vomerine teeth in the center of their upper jaws to prove it. These fish are known to hunt eggs, tadpoles, and even mature frogs, provided they’re small enough for the trout to swallow.

A 2004 experiment showed that introducing invasive trout to an environment led to a decrease in the local frog population. When the trout were removed, the frogs began to return. This study seemed to prove that trout were ready and willing to hunt frogs, even in a strange and new habitat.

River and stream-dwelling trout are less prone to feeding on a frog-based diet, preferring to swim against the current and hunt small prey like insects as they drift across the water’s surface. These trout mostly feed on midges and mayflies.

As for trout living in lakes and ponds, frogs are likely on the menu. Stillwater environments force trout to actively hunt for food, making small creatures like tadpoles a perfect target. Even better, ponds with slow-moving water are the prime habitat for frogs to mate and hatch eggs. Trout living in these environments enjoy a steady supply of frog prey.

Should you add frogs to your list of trout lures?