Home > Saltwater Fishing > Fluke vs Flounder: What is the Difference?

Fluke vs Flounder: What is the Difference?

With all of the species of fish that reside in the ocean, it is not in the least bit surprising that people are often very confused about different types of fish, especially if there are similarities between them. Some such species include that of the flounder.

There are lots of different types of flounder in our oceans and seas. Because of this, there is understandably some confusion and overlap when talking about types of flounder. One thing we often get asked about is the difference between fluke and flounder.

Luckily for you, fish just so happens to be our forte and we have all the answers you could possibly need to all of your fish related questions. In this article, we are going to be exploring whether a fluke and a flounder are in fact different.

We will also be exploring whether they have any similarities shared between them.

What is a flounder?

A flounder is a name given to a group of fish belonging to the larger group known as the flatfish species. There are, as you will know from the introduction, a number of different types of flounders.

They live in oceans all around the world, and may also make their way to estuaries (these are the waters between the sea and a river). They dwell at the bottom of the ocean, and as such, they are known as demersal fish or groundfish.

The name flounder is a term that is used for many different types of fish, and oftentimes they are not actually that similar. They are all distantly related species belonging to the same suborder, but all have variances.

Their diets consist of small fish, polychaetes, fish spawn, and crustaceans. They catch these through predatory methods. The reason for this is that Flounders are a type of predatory fish in that they attack their prey by ambush.

They blend into their environment so they remain hidden from their prey and then attack at the opportune moment, they stick to soft areas at the bottom of the sea such as in mud, and are often found near coral reefs, docks, and bridge piles.

Another interesting point to keep in mind about flounders is that they undergo eye migration. When they are born, as larvae, the eyes of a flounder are on each side of their head. Over time, they experience metamorphosis and one of their eyes migrates to the other side of the body.

This means that they will eventually have two eyes on one side of their body, and no eyes on the other. This helps them to see better when they are camouflaged on the ground and helps them to keep an eye out for food or predators.

What is a fluke? 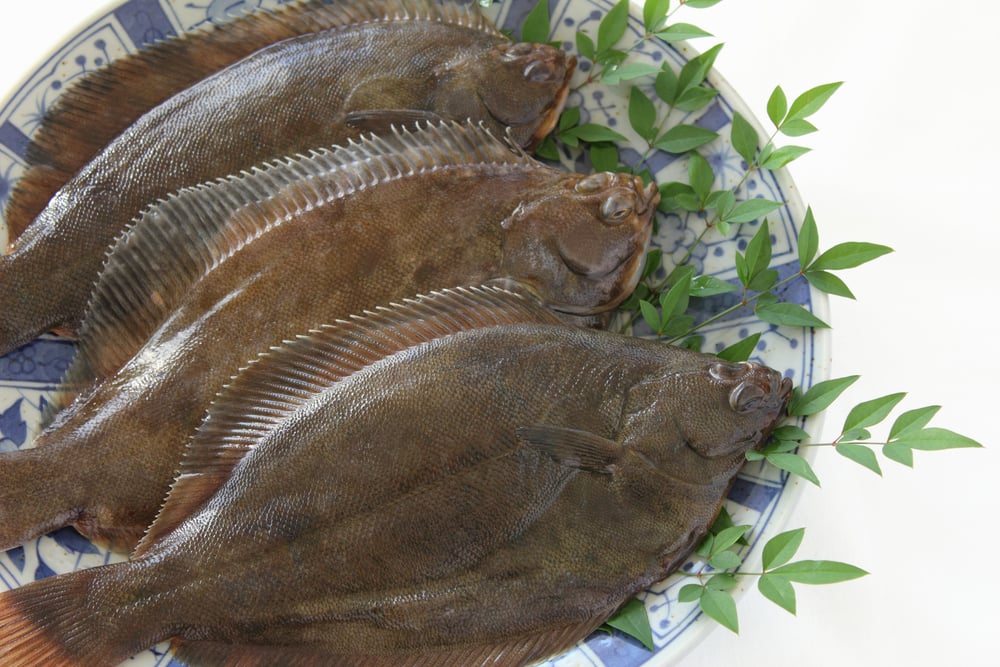 This is a common flounder found in the North Atlantic ocean. As with all flounder, a fluke is a predatory fish and is large and flat.

Many people often confuse the fluke (or summer flounder if you prefer to call it that) with the winter flounder, the reason for this is because they inhabit the same places. However, there are some differences between them that should be noted to help you differentiate one from the other.

For example, a summer flounder, when its mouth faces up, points towards the left.

As well as this, it is a much lighter color brown than the winter flounder which is very dark, almost black brown. As well as this, flukes (or summer flounders) also have some very distinct features in the form of spots over their body, near their tails.

These spots resemble eyes and have three rings. They are often creamy white in color, thus differentiating them from other types of flounder that do not have white spots on them.

Is a fluke a type of flounder?

Yes! If you hadn’t already guessed, a fluke is indeed a type of flounder! It is another name for the summer flounder, which you will already know if you read the previous section. So, there is no need to be confused.

What may be causing confusion is the fact that people use the name flounder interchangeably with fluke, and call several different species by the same name.

If you are concerned about the differences between fluke and other types of flounder such as the southern or winter flounder for reasons related to taste, cooking, and eating, we want to assure you that there is not much difference between them all.

To the untrained mouth, there may not be any difference at all. Both of them taste as similar as they look and are especially good when fried.