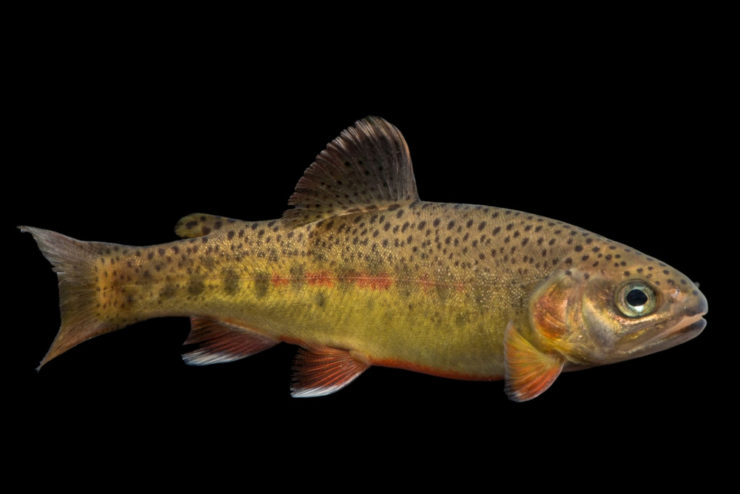 The Gila trout is one of the most beautiful and treasured species of trout in the United States. Though widespread conservation efforts have increased the Gila’s numbers, historic environmental change and degradation have dramatically reduced its populations.

This relative rarity has left many anglers with limited knowledge of this fish. Fortunately, the guide below will help fill in the blanks and give you precisely the information you need to make your next (or fish) catch.

The Gila (Oncorhynchus gilae gilae) is a stout fish, most easily distinguished by the rich yellow body coloration. Its native range mainly comprises the Gila River System, a 600-mile stretch of water that extends across Arizona into New Mexico and ultimately merges with the Colorado River.

These fish live up to 4-6 years, having a spawning season in each of these years between April and June. Body sizes are as follows:

Despite prolific annual spawning, the species is federally recognized as an Endangered species. Experts believe that the only “pure” population lives in a part of the San Francisco drainage, Spruce Creek.

How to Identify the Gila Trout

This species’ radiant yellow scales are immediately recognizable. They cover the lower half of the body, blend upward into the dark spots that decorate the upper half of the fish, providing a natural, effective form of camouflage that prevent easy detection from above.

During the spawning season, this gradient is separated by a light, salmon-pink band on adults. Larger fish often have a noticeable yellow cutthroat mark, while others might have parr marks as well.

Be careful not to get this species confused with the Apache, which has similar coloration. You can be distinguished the two by the Apache’s larger yet sparser spots. Apache trout will also lack the salmon-pink band in all life stages.

This trout is a close relative of the Pacific salmon and even upheld a similar migration route to many salmon species in the past: Traveling to the Southwestern mountains from the Gulf of California. Unfortunately, as climate and the environment changed over the years, its route from the mountains to the ocean was compromised, reducing their habitat range.

Subsequent overfishing in the 19th century, destructive land management practices, and non-native trout introduction presented further ecological pressures that forced the trout to evolve for persistence. When they were finally recognized as an official species in the 1950s, their populations only remained in five streams in the western US.

The current world for the largest Gila trout catch is 3 lbs and 7 oz. This feat, accomplished on March 19, 2011, by the angler, Bo Nelson, was categorized in the All-Tackle Line Class by the International Game Fish Association (IGFA). Nelson made his catch in the Frye Mesa Reservoir, located in Arizona.

This species undergoes a spawning season once per year from April to June. During this time, females will lay up to nearly 700 eggs in the clean, coarse gravel lying at the bottom of ever-flowing redds.

Many believe that the fish’s sex is primarily determined by genetics, although there is reason to believe that temperature may also play a role in whether a fish becomes a male or female.

In addition to the Gila River System mentioned above, Gila trout populations have also been recorded in the San Francisco and Verde and Agua Fria drainages (both of which are located in Arizona), along with many areas in Colorado.

Though its native river naturally flowed into New Mexico, the species spread further when they were introduced into McKnight Creek, a Mimbres River tributary found in the Guzman basin. Overall, this fish favors cold, montane waters surrounded by a variety of coniferous forest types.

These trout primarily feed on insects like those listed below:

However, when the going gets tough and food grows scarce, don’t be surprised if you find the Gilas consuming one another.

Gila trout normally hunt and eat in the morning and can become quite territorial of their hunting sites. Still, numerous fish will aggregate in one hunting area if water levels fall, which may cause a portion of the population to starve.

Threats to the Species

Other threats include hybridization with these non-native species, which degrades the genetic health of Gila trout populations, as well as wildfires that result in toxic ash flowing into the rivers.

How to Catch a Gila Trout

The Gila and other trout species are most often caught via fly fishing. One angler, Jake of Outdoor Rushes, saw quick success in the Tonto and Lower Canyon creeks of Arizona with a size 14 simi seal leech and size 16 bead-headed nymph.

Fly fishers interviewed by the New Mexico Game and Fish Department used similar techniques as well. The anglers noted that the specific type of fly you use is not a major concern, as Gilas are quite curious and will come and nibble on any fly “to check if it’s edible.”

Where to Catch a Gila Trout

These fish prefer small, perennial, cool bodies of water that are typically below 25°C (77°F). You will find them in montane, riparian habitats between 1,600-2,800 m in elevation. If you’re looking in New Mexico, your best bet at finding these fish is to visit the Gila and Aldo Leopold Wilderness Area.

Here, you will most likely find them hiding under fallen tree branches or taking shelter and hunting beneath undercut banks. Be mindful of the environmental conditions as you search, though, since they might also live in groundwater seeps during droughts.

How to Eat a Gila Trout

There are so many mouth-watering recipes out there on how to prepare this trout for you and your family. However, the most common and basic way to eat this fish (and many other types of trout), as suggested by Chef John of AllRecipes, is in a nice, buttery broiled dish. For this meal, you’ll need to gather the following ingredients:

Melt the butter in a pan on medium-low heat and drizzle about one teaspoon of it over the trout on a piece of foil. The trout should be open, with the skin side down. Sprinkle on the S & P, then broil the fish for 2-3 minutes. Boil the remaining butter with lemon juice and parsley to make a sauce, pour it over your fish, and voila! You have a tasty fish dinner.

With your newfound knowledge on the Gila trout, you are prepared to make the perfect catch and enjoy this delicious fish with your loved ones. Be sure to review this guide before you head out to the river to ensure a successful trip.