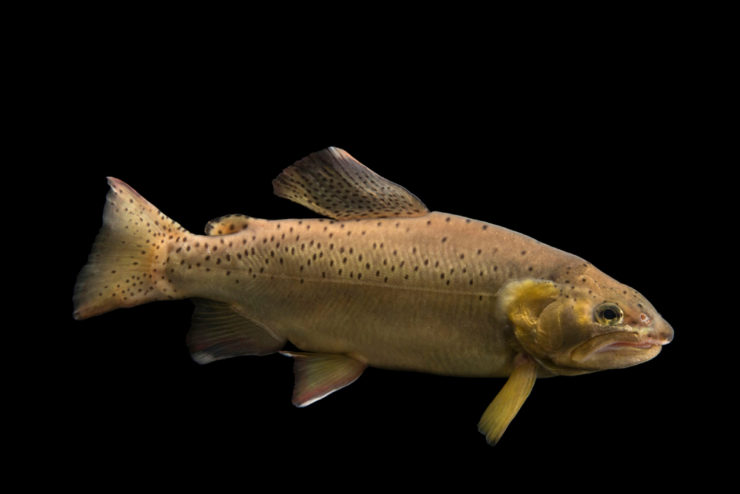 Interested in catching an Apache trout? Here’s everything you need to know.

The Apache Trout is a rare and beautiful trout species found only in the high mountains of Arizona. The Apache trout’s small population and limited range have earned it the title of Arizona’s state fish. Purists will find the best angling opportunities on tribal land, although public waters provide a host of opportunities for hybrid and hatchery-raised populations.

In its native rivers and streams, the Apache trout will reach sizes six to ten inches in length. Lakes will typically have larger specimens in the area of fifteen inches.

Due to the degradation of habitat brought on by ranching and the timber industry, this fish was near the brink of extinction in the mid-twentieth century. Conservation efforts began in the mid-1950s, and the Apache trout was officially listed in the Endangered Species Act of 1969, giving it Federal protection.

Joint conservation efforts among multiple agencies have significantly increased the number of native populations. This encouraging news bodes well for the future of this beautiful species.

Tim McGough of Scottsdale, Arizona, holds the catch-and-release record. He caught a 27-inch fish on Silver Creek, a tributary to the Little Colorado River, in October of 2009. Lyle Hemphill set the hook-and-line record in June of 1993. This specimen was caught in Hurricane Lake, on the Fort Apache Reservation, weighing in at 5 pounds, 15 ounces, and measuring 24 inches in length.

It takes the Apache trout around two years to reach maturity. The Apache trout can live to six years of age, but the vast majority will only live to be about four years old.

Hatchery-raised fish also populate tribal lakes, as well as public waters. This species has an affinity for cooler temperatures, so you will only find them in the forested mountains of east-central Arizona.

Apache trout feed on aquatic insects, such as caddisflies and mayflies, during various stages of their life cycle. This includes the larval and pupal stages when these insects are submerged, as well as top-water stages, such as the emergence (also known as hatches) and egg-laying stages.

Terrestrial insects and invertebrates are another food source. Invertebrates, such as worms, will often wash into rivers and streams during spring runoff. Terrestrial insects, including ants, grasshoppers, and gnats, also become stranded on the water, providing a desirable addition to the Apache trout’s diet.

Interbreeding with non-native trout species and competition for resources with these species has significantly impacted the population. Other factors include the logging and ranching industry, which have harmed the Apache trout’s habitat.

Finally, overfishing has also been a problem for the Apache trout. Be sure you read and understand the current regulations, use approved angling methods, and only keep fish for consumption where it is legal.

How to Catch Apache Trout

Anglers can catch the Apache trout using ultralight to light action spinning rods using lures or live bait. A 00 Bluefox Vibrax spinner or a small Panther Martin will work well for the spin fisherman. Hatchery-raised fish will respond well to various bait for the hook-and-line fisherman, from traditional worms to PowerBait.

When fly fishing, various wet and dry flies work well, so long as the hook sizes are between 14 and 19. The Apache trout won’t take larger flies due to its small stature, so it’s best to leave these in the fly box unless you are fishing hatchery-stocked lakes.

Like most trout, the Apache will typically rise in the morning or evening hours during the warmer months. When fishing dry flies, cast just upstream of feeding lanes formed by converging currents. These flies also produce great results on still water when fish are rising. Don’t forget, terrestrials, like hoppers and ants, can also be a great option between hatches.

Wet flies are a better option when the Apache trout rest in sheltered lies, such as an undercut bank, below overhanging vegetation, and around submerged logs. Be sure to fish these areas during the warmer parts of the day in summer. These flies also work great for colder months and can be fished like dry flies in riffles and feeding lanes.

Keep in mind, when fishing the East Fork, you need to be upstream of Coulter Dam. Many of these areas are on the Fort Apache Reservation, so special fishing and boating permits are required. Be sure you plan ahead.

Hatchery-raised Apache trout enjoy a broader range than their wild cousins. If you prefer moving water, try Silver Creek, the Little Colorado River near Grear, or the Black River’s East Fork. Hurricane Lake, Lee Valley Lake, and Ackre Lake are regularly stocked with hatchery fish. Hurricane Lake will require a tribal permit, but Valley and Ackre Lakes are on public land, meaning an Arizona Fishing License is all you need.

This trout species is delicious, whether you grill it whole, pan-fry, or smoke your catch. Due to the small size of the Apache trout, scaling is rarely necessary. For simplicity, we like pan-frying the best.

Simply baste your catch in a mixture of lemon juice and a little mustard. Next, bread both sides with breadcrumbs, adding some garlic, red pepper flakes, and salt to taste. Cook your breaded fish in a pan of olive oil over medium-high heat. Start frying with the skin side down for six to seven minutes, then flip for the final three minutes.

You’ll be enjoying some delicious, fresh-caught Apache trout in no time.