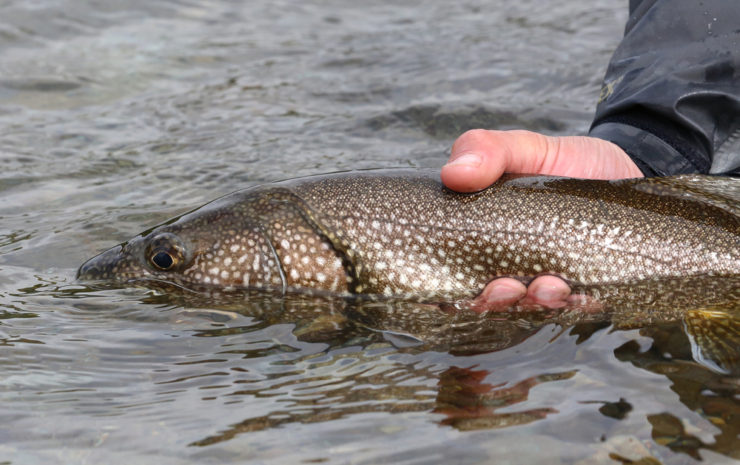 Lake Trout are the biggest type of freshwater char you will find. Large and voracious, these fish can make for a fun afternoon on the water. Many lakes today are stocked with trout, offering fantastic angling opportunities.

That said, trout behavior in ponds, lakes, and reservoirs is different from trout behavior in moving water habitats. You have to consider the unique conditions and feeding patterns depending on the water and adjust your fishing tactics accordingly. Locating the fish, applying the right technique, and presenting your bait never gets boring.

This primer to Lake Trout gives you essential information about this fish, from how to identify it to where you can catch it. Get the facts below.

Basic Facts About the Species

The scientific name for Lake Trout is Salvelinus namaycush. Lake Trout are members of the Salmonidae family and referred to as Salmon Trout, or Mackinaw Trout. They are most widely distributed across northern Canada and Alaska, the Great Lakes basin, and New England.

How to Identify a Lake Trout

You can recognize Lake Trout thanks to their greenish-gray hue and pale spots. Like other chars, Lake Trout have white leading edges along all of their lower fins and light-colored spots dotting a darker background. This sets them apart from salmon and trout, which tend to have dark spots against a light background.

White spots extend across the body and adipose, dorsal, and caudal fins. Lake Trout will not exhibit haloed, red, or black spots. Another telltale characteristic of the Lake Trout is the deeply forked tail and the many rows of basibranchial teeth. Other types of chars have less numerous, or no teeth at all.

Today, Lake Trout can be found across the United States and Canada, especially in more northern, colder areas. Most modern Lake Trout populations are augmented or sustained via hatchery stocking. However, Lake Trout have also been introduced further afield in the southern and western United States and even in parts of Europe, South America, and New Zealand.

Most Lake Trout are about 20 inches in length. The longest ever Lake Trout recorded was 59 inches, however. The largest-ever Lake Trout caught on record weighed a whopping 102 pounds (46.4 kilograms). It was caught in Alaska.

Lake Trout mature around age six or seven. They usually spawn during the autumn months. The fish don’t construct nests but are broadcast spawners. Spawning occurs at night, over wave-swept shorelines and rocky shoals, with river spawning being very rare.

The female Trout are “courted” by the males, who will “headbutt” the female and swim beside her. A 32-inch female can deposit an estimated 18,000 eggs. Once fertilized, the trout eggs sink to the bottom of the lake. Once lodged between gravel and boulders, they remain secure until the spawn hatch. The eggs hatch four to five months later, in the spring of the next year.

The average Lake Trout lives for about 25 years. Lake Trout have been reported to live as long as 40 years in some Canadian lakes.

As the name suggests, most Lake Trout live in deep lakes, although you may also sometimes find them in freshwater streams. They are rarely found in brackish water.

Lake Trout prefer deep and cold lakes in the more southern areas they inhabit but can be found in shallower lakes in the more northern regions they call home. Lake Trout cannot tolerate waters with low oxygen content. In terms of specific temperatures, they prefer waters less than 60° Fahrenheit (15.6° Celsius).

You can catch smaller Lake Trout (weighing a mere five pounds) in shallow water. You can find larger fish weighing as much as 100 pounds in deeper water by trolling the bottom in the summertime.

Before they hatch, Lake Trout absorb their nutrition from the yolk sac of the egg. Following hatching, the first food the small fish consume is zooplankton. As the fish get larger, they will expand their diet to include terrestrial and aquatic invertebrates and, later, other fish.

Adult Lake Trout usually subsist on a diet of freshwater organisms like crustaceans, small fish, insects, and sponges. They are especially partial to “lake herring” or ciscoes. In general, Lake Trout are daytime feeders.

Some Lake Trout will exist solely on plankton. Plankton-feeding Lake Trout tend to grow more slowly and mature earlier. They usually are smaller in size and have shorter lifespans than piscivorous Lake Trout. Plankton-eating trout are generally only found in deep lakes where there are no forage fish available in the summer months.

Lake Trout have been nearly decimated for various reasons, from natural predators like the Sea Lamprey to pollution of their habitats. Conservation is an issue for Lake Trout, with population levels varying across North America. The U.S. Fish and Wildlife Service works with state fisheries and conservation groups to establish more self-sustaining trout populations in critical bodies of water, like the Great Lakes.

How to Catch Lake Trout

Timing is critical if you want to fish Lake Trout successfully. These fish avoid bright lights, so you’re best off fishing in overcast conditions. Alternatively, you can get up early and fish between dawn and 11:00 a.m., or at twilight. The fish will be more comfortable coming out at these hours. They also tend to bite more when bugs are active.

So, what equipment do you need to fish Lake Trout? The erratic motion of jigging mimics a wounded fish and is a winning approach to capturing Lake Trout’s interest. You’re best off using light lures, so stock up on spoons and spinners before you head out. Alternatively, you can try using live bait like salmon eggs, minnows, or nightcrawlers.

Where to Catch Lake Trout

The best place to catch Lake Trout will be in their native habitat, in the cold oxygenated waters of Canada, Alaska, and the northern United States. Trout like to move in the water and are always roaming. They are mostly independent fish and won’t depend on large schools for predation or protection. However, they will amass in ideal conditions.

If you’re fishing in lakes, opt for reservoir-style lakes with inlets and outlets of rivers or streams. This moving water will create colder temperatures and attract fish. In spring and fall, the fish can be found nearer to the shore, and you can reach them by fishing along ledges and dropoffs.

In the summer, however, fish will be in deeper waters, seeking out the cold. You’ll need to get out on the water in a boat to access them. Use trout-focused bait rigs to cast your bait further and access different parts of the water column. A bottom rig with an egg sinker will give you a deep cast, ideal for lower-feeding fish.

In most cases, Trout will follow the thermocline. This is a gradient layer in the water where cold and warm water meets, mixing oxygen and nutrients. This specific area is usually set in the bottom two-thirds of the water column. So, if you’re fishing in 20 to 30 feet of water, it will be about five to ten feet off the bottom. If you bait your hook with a floating bait, it will rise close to the thermocline.

Since Lake Trout swim at different depths depending on the year’s time to follow the colder water, a depth finder is a smart investment. This technology lets you accurately determine at what depth the fish are swimming to target your bait accordingly and improve your odds of success.

Finally, if you’re fishing in a pond, you don’t have the luxury of identifying a cold water source like an inlet or outlet. In this case, target the deepest basin of the pond.

How to Eat Lake Trout

Trout is a healthy source of lean protein and full of omega-3 fatty acids, B vitamins, and iron. You can serve up Lake Trout in many ways. If you want to show off your catch of the day, you can cook the trout whole.

Although Lake Trout were once nearly extinct, conservation efforts have securely reinstated this fish in the northern United States and Canada. Many lakes are now packed full of Lake Trout, supplied by hatcheries, making for fantastic fishing. Follow the above tips to finding and catching these fish, and enjoy the thrill of reeling in a big one.