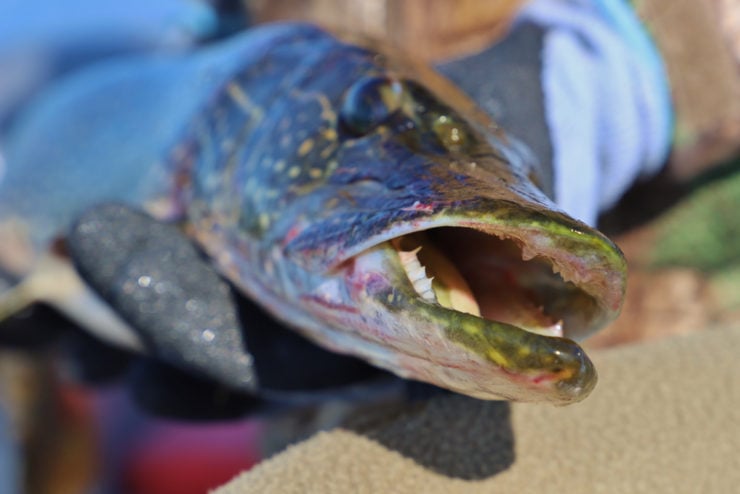 Northern Pike are considered the fresh water barracuda due to their long bodies and mouth full of sharp teeth.  These fish are on top of the food chain as the main predator in lakes and rivers in the Northern hemisphere.

If you plan to go fishing for pike, you should probably learn about their teeth and feeding habits.  We’ll break it down for you in this article.

Do pike have teeth?  Yes, of course they do and lots of them.  In fact, pike are well known for their teeth and being the big fish in the pond.  They eat everything that moves from walleye, ducks, frogs and even other pike fish.  If you catch one, don’t pick it up like a bass with one thumb in the mouth or you will be in for a painful surprise.

How Many Teeth Do Pike Have?

These hundreds of teeth are spread across multiple rows on both the bottom and top of their jaw and mouth.  They range from large to tiny sized teeth and all serve a purpose of grabbing their meals.  Some point backwards into the mouth and this direction keeps their prey locked in.

Their bottom teeth tend to be bigger and the top of a pike’s mouth has more teeth, but smaller in size.

Do Pike Shed Their Teeth?

It is thought that pike shed their teeth in the mid-summer time frame and new ones replace the old.  This theory stems from a lack of pike being caught during this period so fishermen and scientists assumed the pike had less teeth or sore gums.

Research could not find any evidence to say they shed their teeth or not.  So the data is inconclusive.

Maybe pike are similar to sharks where rows are constantly being replaced with the next row of teeth as they break or fall out.

In general, no they are not known for attacking people swimming or wading in lakes and rivers.  They are more scared of humans than we are of them.

This doesn’t mean there haven’t been people bit by pike.  These fish are similar to barracudas and if you are wearing something shiny that reflects light, the pike could mistake it for a bait fish and try to eat it.  Your watch and bracelet or earrings could attract a hungry pike who thinks it is a meal.

Best bet is don’t stick your hand in a pike’s mouth unless you like to bleed!

Can Pike Bite Through Braid or Other Line?

Braid is strong and resilient line made for tough conditions and toothy fish.  It would be rare for a pike to have sharp enough teeth to bite through braided line.  They can damage it and make the line weaker or flawed so over time it could break if there is enough pressure on the line.

They might have an easier time biting through mono or fluorocarbon lines, especially if it is light weight and the pound test isn’t strong enough.

It is best to use a strong fishing line when attempting to catch big pike.

Avoid picking up pike by the mouth.  If you want to know how to hold a pike, check out this article for tips.