Steelhead trout, the anadromous version of the rainbow trout, is a one of a kind fish with an interesting story. These Pacific salmon relatives are found throughout the United States and thrive differently depending on their environment.

This post will guide you to everything you need to know about the steelhead trout, including identification and description, history, world record, life cycle, habitat, diet, threats, how to catch, where to catch, and how to eat.

Steelhead trout are typically twenty-four inches in length and weigh anywhere from eight to eleven pounds. Steelhead trout have two classification types based on their stage of sexual maturity.

Classifications are referred to as ocean maturing and stream maturing. They are an instrumental part of the commercial fishing industry and a hot commodity, especially on the Pacific Coast.

Steelhead trout are anadromous, meaning they travel to saltwater after being born in freshwater. Once these fish are ready to breed, they return to their original freshwater environment. 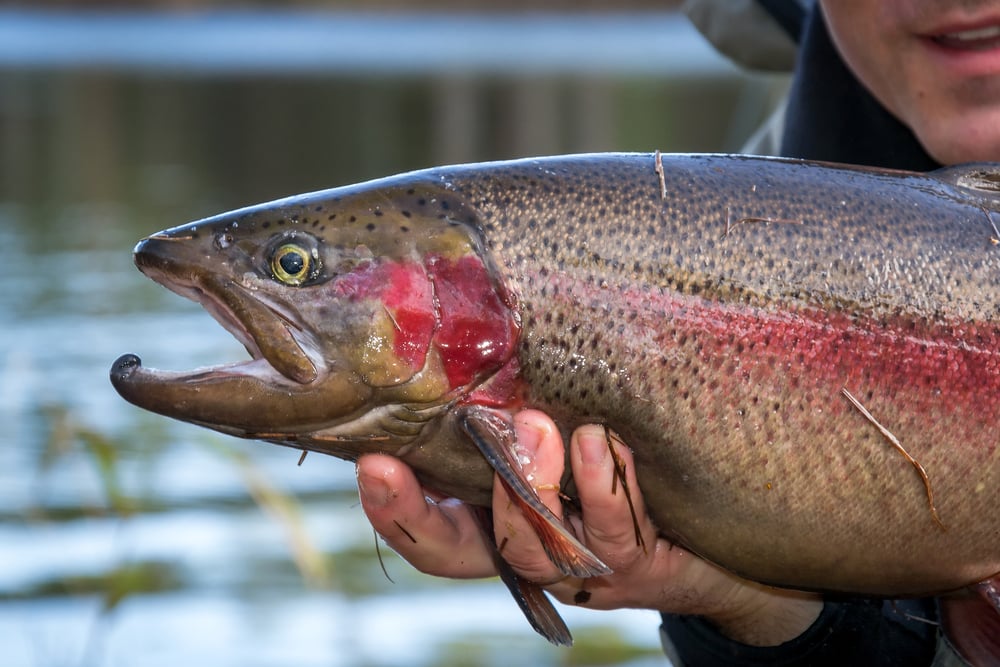 Steelhead trout have a distinct appearance. Even though these trout are considered a form of rainbow trout, Steelhead trout lack a majority of the vibrant rainbow color and appear more silver with black dots.

The black dots can vary in appearance and location on the fish, with some being scattered across the entire body or being more prominent on the tail. These black dots typically extend to its two fins and tail, with the tail pattern appearing evenly distributed. They also have a more defined, hydrodynamic shape and are more extensive compared to Rainbow trout. 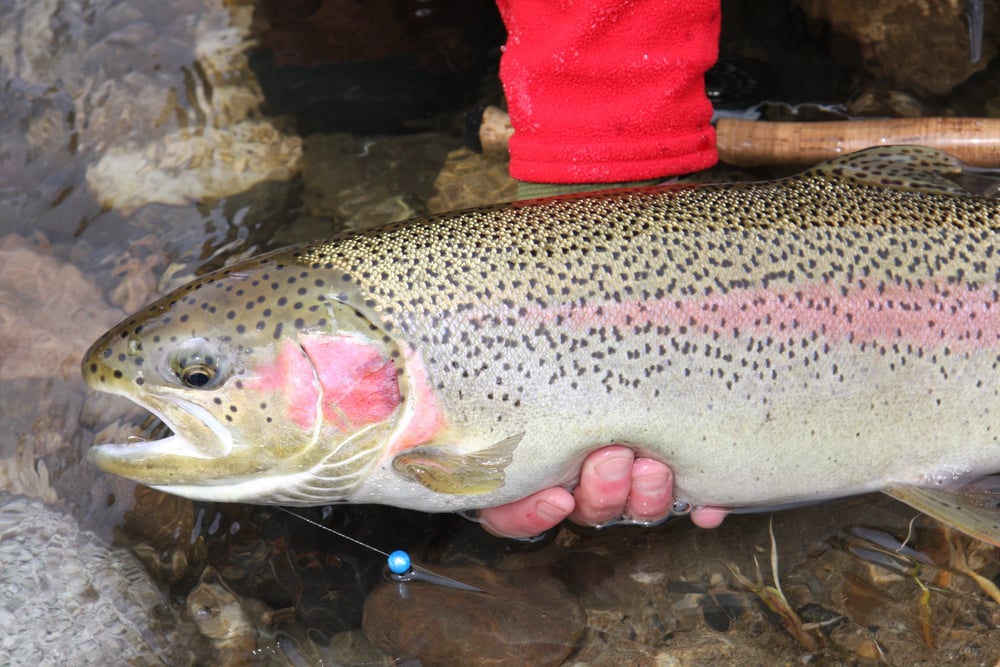 Steelhead trout are the closest relatives to Pacific salmon. They are native to North America; however, they are in almost every continent. You can mainly find Steelhead trout west of the Rocky Mountains in the United States.

Steelhead trout eggs take three to four weeks to hatch in freshwater habitats. They typically spend one or two years in freshwater as adolescent Steelhead trout. After that, the trout migrate to the ocean and spend up to three years before returning to spawn.

Steelhead trout require cold, oxygenated freshwater habitats to survive. After one to two years, the trout migrate to saltwater habitats. A spawning habitat usually takes place in freshwater with gravel free of an abundance of silt.

A young Steelhead trout diet consists mainly of zooplankton. Once these fish get older, it becomes increasingly common for Steelhead trout to feed on mollusks, insects, fish eggs, minnows, and crustaceans. 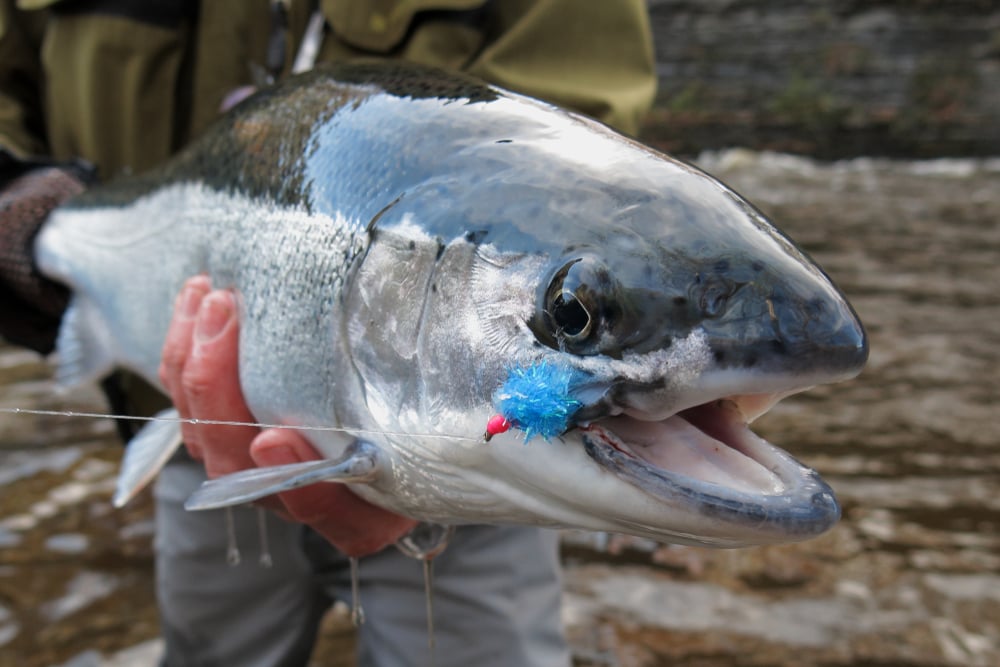 Unfortunately, Steelhead trout experience threats to their habitat, which is why conservation efforts are in place. Habitats become destroyed by human-made obstructions resulting in a decreased water supply. Dams, agricultural operations, forestry, mining, and urbanization are common culprits for blocking water supply.

Steelhead trout are also susceptible to specific diseases and breeding with other trout types, increasing their risk of death.

Southern California DPS is the area where Steelhead trout hold the endangered title, while they have the threatened title in the following areas:

Since Steelhead trout are so valuable, conservation efforts have been in place for decades to help the population thrive. Scientists actively study various methods to learn how to protect them further. Some organizations work to amend and protect Steelhead trout habitats destroyed by humans.

Catching Steelhead trout requires specific fishing equipment. To successfully catch one,  you will need a fly tackle, baitcasting outfits, or spinning gear to target them. Fly fishing is an ideal method to use because Steelhead trout are notorious for leaping through the air. Trolling, bait, and spin casting are also methods used to catch Steelhead trout.

There are several options when it comes to using the right bait. Live bait, such as cured salmon or other fish roe, have succeeded in attracting Steelhead trout. Artificial baits such as spinners, rattle lures, flies, and spoons are also useful. In terms of fishing rods, there are many quality products to choose from. 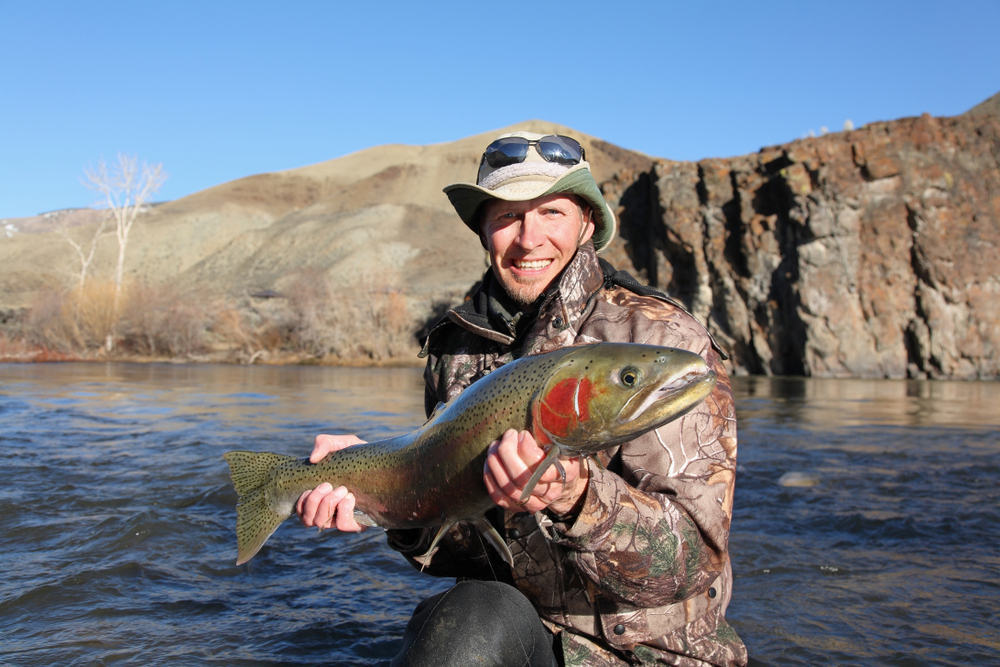 For the majority of the fish’s lifespan, you can find the Steelhead trout in the waters of the Pacific Ocean. You can typically find young or spawning Steelhead in streams, rivers, and other freshwater estuaries and tributaries west of the Rocky Mountains. There are many prime locations for fishing on the East Coast in New York and Pennsylvania.

Here are some more specific places to find these fish: 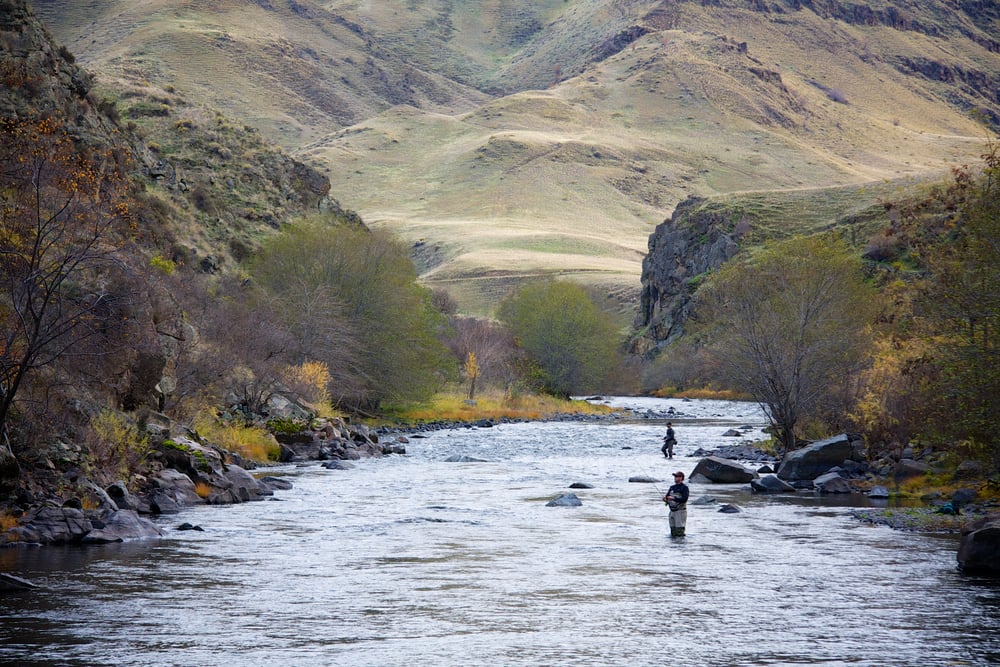 Steelhead trout is a nutritious fish that is prepared using an abundance of different recipes. Steelhead trout lovers often say they resemble salmon in texture but usually taste milder and sweeter.

Before cooking a Steelhead trout, it’s essential to clean it and remove all of the outer scales thoroughly. The skin can be consumed if desired and is encouraged because of its many nutrients. With any recipe, you’ll know your trout is fully cooked when it reaches an internal temperature of 145 degrees Fahrenheit.

Another way to assess a fully cooked fish is by checking its texture. A cooked fish is evident if you can take a fork, and it easily flakes. Cooking times and temperatures vary based on the recipe.

Steelhead trout are versions of Rainbow trout; however, spend time in both fresh and saltwater, whereas Rainbow trout are solely in freshwater. These fish are unique due to their anadromous lifestyle and their ability to thrive differently based on their environment.

They are in the top five categories of sought after fish on the Pacific Coast and are found worldwide. Man-made operations often threaten habitats; however, conservation efforts are in place. Steelhead trout are also a favorite fish for fishing enthusiasts to catch and make for a delicious meal. Visit Fish Masters for more tips and frequently asked questions regarding trout fishing techniques and equipment.