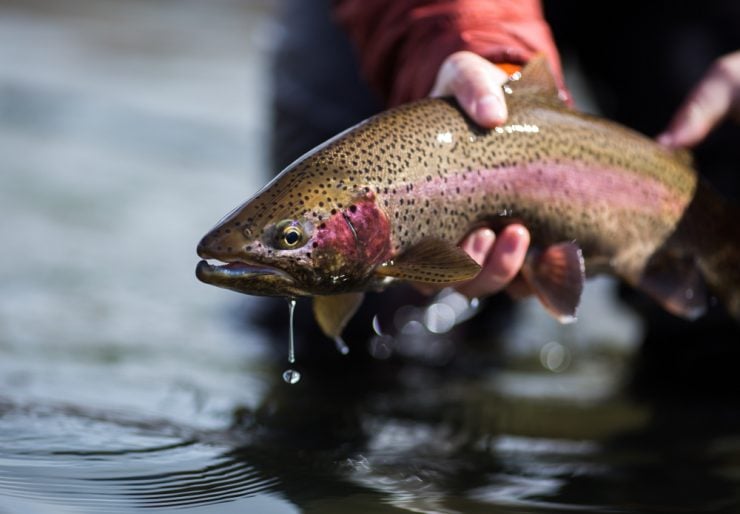 Whether you’re an experienced angler or a beginner, keep reading to learn the basics of trout fishing including types of trout, best locations for trout fishing, competitions, and more.

This type of trout is native to the cold water tributaries of the Pacific Ocean in North America and Asia. Rainbow trout found in rivers and streams tend to weight around 1 to 5 pounds, but rainbow trout living in lakes can grow up to 20 pounds. These beautiful fish can be found in Lake Tahoe, Lake Kawaguchi, Lake Salda, and Lake Ashi, among other tributaries and lakes.

Another popular species of trout is the lake trout. They are mostly found in freshwater lakes in the northern part of North America and in Canada. Lake trout are some of the largest trout, and an adult lake trout may weigh from 15 to 40 pounds. Though these fish are most often found in deep, cold water lakes, you can also catch them in some tributaries off of those lakes.

The brook trout is the state fish of nine states in the US. Their weight ranges from 0.5 to 6 pounds on average. This species is native to Eastern North America and Canada, but has been introduced in other freshwater locations around the globe. Brook trout can be found in lakes, rivers, streams, and ponds, but prefer clear waters and are particularly sensitive to pollution, changes in pH, and warm water.

This is another beautiful species of trout. Brown trout is native to European waters around Norway, Iceland, and Northern Africa, but it has been introduced into lakes and rivers around the US and the world. They tend to weigh from 2 to 10 pounds on average, with the world record catch around 40 pounds. Brown trout live in cool rivers and lakes and often hide in turbulent waters or under rocks and debris.

Golden trout is another notable species. They are also known as California golden trout, as they are native to California and are the CA state fish. Golden trout are mainly found in the Sierra Nevada area, in the South Fork of the Kern River, The Golden Trout Creek, and their tributaries. Golden trout are small: the world record catch is only 11.25 pounds.

There are, of course, many other species and subspecies of trout. 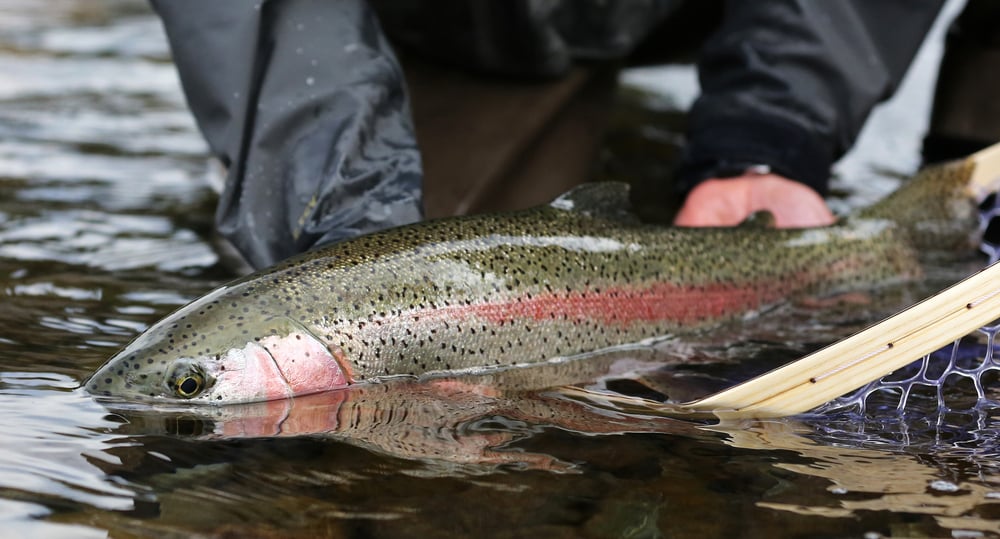 There are many places in North America where you can go trout fishing. If you are looking for some of the best places, we’ve compiled the most popular locations for trout: 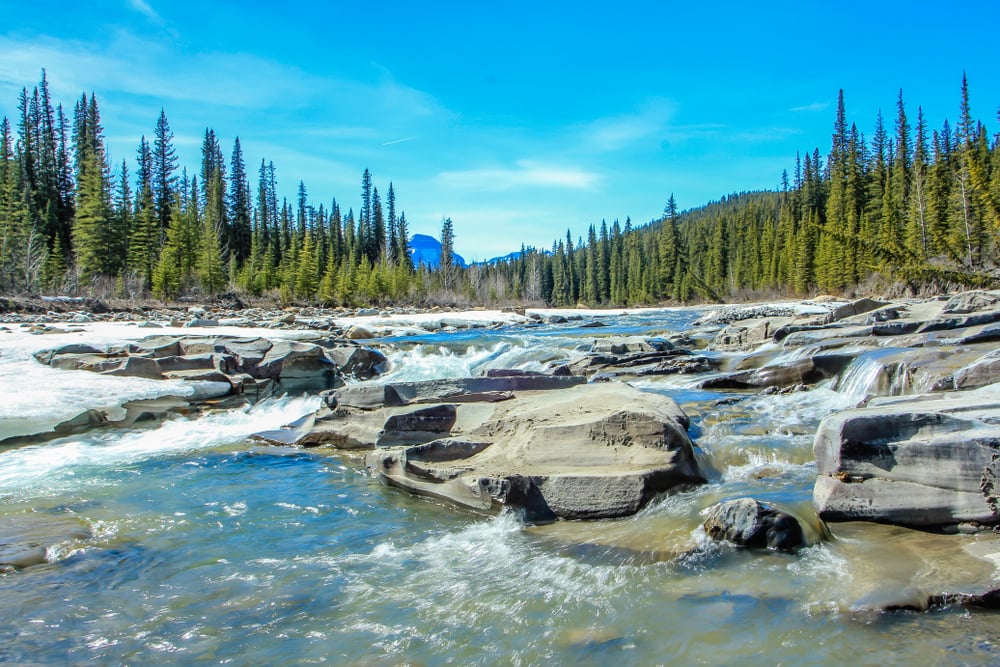 This is one of the most popular and renowned fishing locations. Bighorn River is an ideal place to catch large trout. Anglers have reported an average catch size of 17 inches. The most common catch is brown trout. Rainbow trout are rare, but highly prized when caught here.

Both experienced anglers and beginners flock to the South Platte River: it has something for everyone. This river is classified as “Gold Medal” by the Colorado Wildlife Commission for its many large, beautiful trout. The South Platte River is full of brown, brook, and rainbow trout.

The North Platte River begins in northern Colorado and extends into Wyoming. The North Platte also has areas designated as a “Gold Medal” and is also classified as a Wild Trout river. Anglers find great success finding brown trout in this river, named the #1 Big Fish Destination by American Angler Magazine.

The White River of Arkansas and Missouri is one of the best trout fishing water sources in the USA. Its reputation as a world-class brown trout fishery is well deserved, with many trophy-sized trout caught in this river. Rainbow trout are also consistently caught in White River year round.

Colorado is quite popular for trout fishing. The Colorado River is an excellent fishery where you can find assorted species of trout. The river contains brown trout, rainbow trout, cutthroat trout, brook trout, and hybrids, ranging in size from 8 inches and up.

The Green River in Utah is one a favorite destinations for fishing, especially during the spring season. Home to brown, rainbow, cutthroat, and cut-bow hybrid trout, the Green River is known for plentiful and massive trout. Green River’s crystal-clear water, scenic views, and abundant fish bring huge crowds to Utah annually.

There is no doubt that fishing can be an excellent way to kill time. With the right weather conditions and a picturesque view, a day out on the water can be both fun and productive. Not all fish are in season year-round however, and depending on location and weather your trout fishing expedition can be more or less successful.

Luckily, trout are fairly accessible throughout the year in cool, freshwater locations. To increase your chances of success, fish for trout in peak season and weather conditions. Consider these tips when planning and executing your next trout fishing trip:

Each year states across the US breed trout in hatcheries to be stocked in their local streams and lakes prior to fishing season.  They selectively release thousands of fish into the local waters for fishing enthusiasts to enjoy.  These trout range from 9 inches to 20 depending on their age and type. 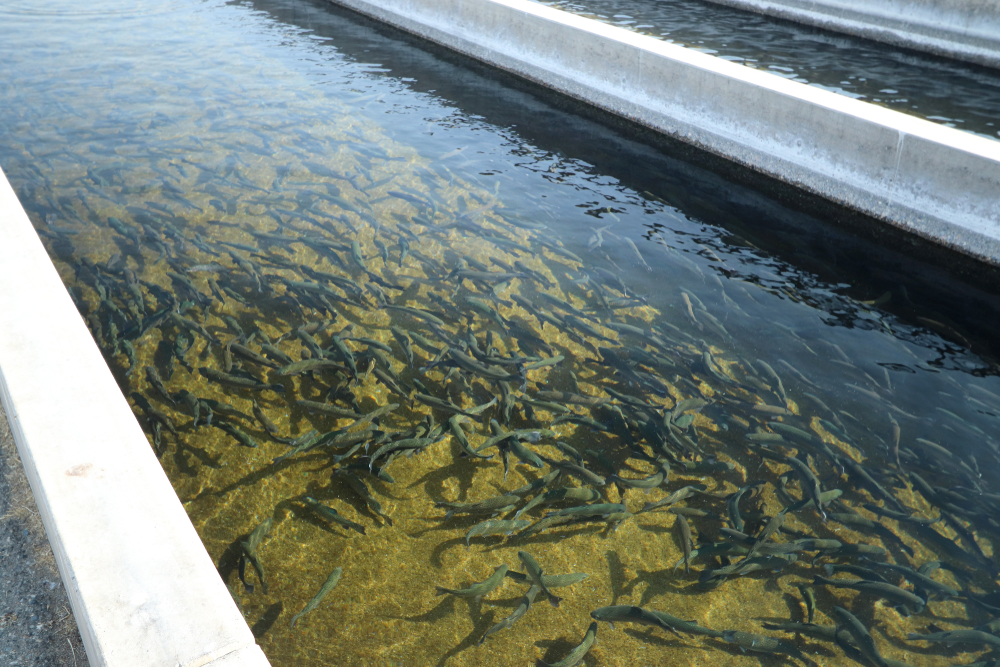 There are many notable tournaments and competitions that are held in various parts of the US for trout fishing. They generally take place during the spring and summer seasons.

Opening Day is the most popular day for trout fishing each year. Across the country, anglers are often shoulder-to-shoulder joining in on this celebration of the beginning of the season. Opening days vary from state to state and among different bodies of water, but most occur from early March through April. Many lakes and rivers host competitions for opening day, offering a variety of prizes.

This is one of the coolest and the best fishing tournaments for trout fish, held every year in Northern California. The tournament only allows a total of 8 two-person teams, so you need to be quick to enroll. Teams spend a half day on California’s best wild trout rivers: The Pit River, Fall River, McCloud River, Upper Sacramento River, and Hat Creek.

Blowing Rock, North Carolina is hosting its 40th annual trout derby in 2019. The derby takes place on Broyhill Lake and requires no enrollment fees or pre-registration, making this competition a fun day on the water for the whole community. Other lakes in the county also participate, including Price Lake, Bass Lake, Trout Lake, and the Middle Fork River.

How to Catch Trout

There are a few ways to catch trout.  One of the most popular is stream and river fishing with a trout lure and casting to the fish with a spinning rod.  Also Fly fishing is a huge fishing niche all to itself and requires an extra level of skills to master the craft.  There are plenty of big trout in the lakes around the world, so you can fish from shore, troll for them in a boat or even drift fish.  When the winter hits and ice freezes of the lakes, try your luck at ice fishing for trout.