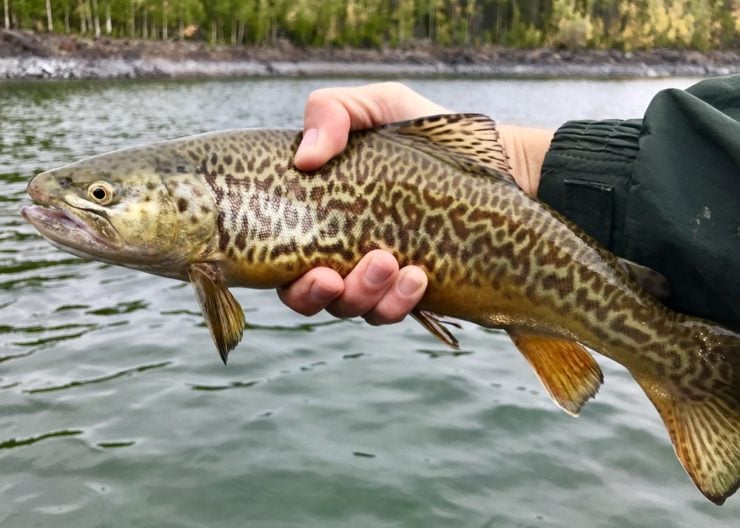 Part of the joy of fishing is identifying your catches. If you’re unfamiliar with the type of fish you might be reeling in, now is the time to dive into some tasty information. Allow this profile to get you caught up on a relatively rare but incredibly gorgeous hybrid breed, the tiger trout.

Finding a tiger trout in the wild is rare, but it does happen from time to time. This hybrid breed is sterile, so you likely won’t see many schools of this freshwater fish swimming around in local streams, rivers, or brooks. That said, they’re not an uncommon type of fish.

The tiger trout is the offspring of a female brown trout and a male brook trout. Because this offspring is sterile, it doesn’t pose a significant threat to indigenous freshwater fish populations. However, these fish can consume vast quantities of food and grow to be quite large. Tiger trout are often identified by their coloration, size, diet, and location. 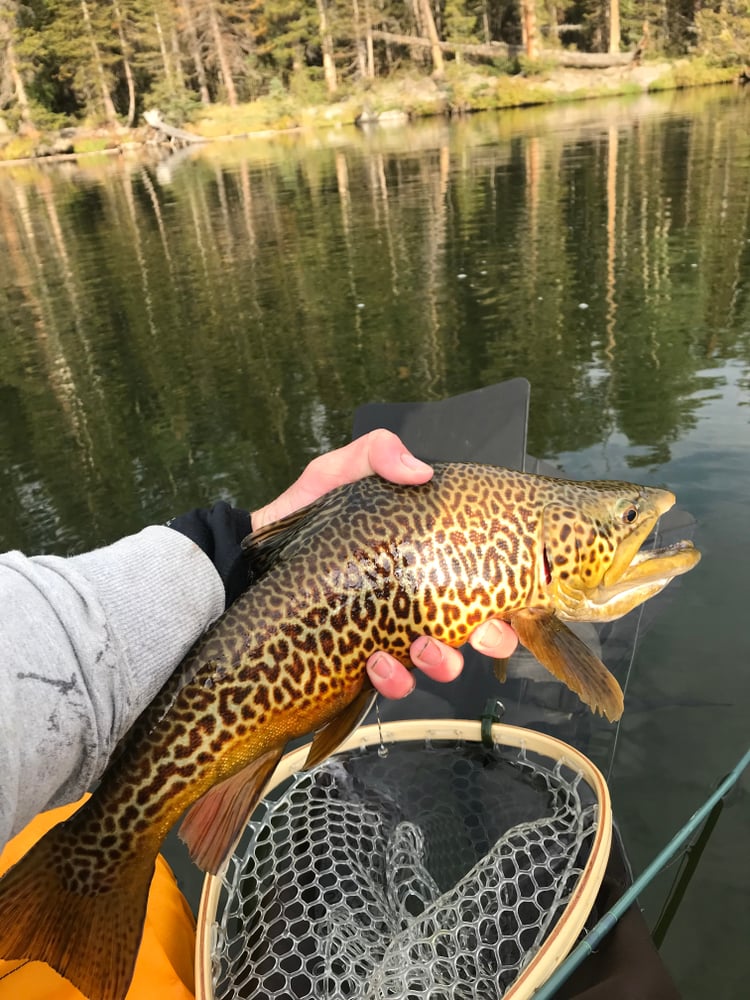 The identification process is reasonably straightforward. To identify a tiger trout, you’ll want to ensure that you’re fishing in a freshwater fishing location. It might be helpful to check and see if you’re near a tiger trout stock location. Secondly, look closely at your caught fish’s coloration.

While many tiger trout feature long black or brown lines across their bodies (similar to a tiger’s fur), others have a similar pattern but with cheetah-like dots connected with lines. Both are technically tiger trout species. Because this is a hybrid species, the exact appearance of any particular fish is bound to vary.

For example, some tiger trout have bright orange bellies and mixed green-and-brown backs. Others are nearly dark green and brown with hardly a tinge of creme, orange, or silver. And still, other types of tiger trout might be fantastically silver near their bellies but jet-black near their backs.

Much of this differentiation is due to age, gender, and previous breeding history. Tiger trout aren’t a purebred catch, though they can be a rare and exciting one. Studying common types of trout may help you better identify tiger trout.

The history of tiger trouts is a little muddled. While documentation regarding this hybridization goes back to the 1940s, there’s a chance that the novel breed is far older than that. The tiger trout have likely been catching the eyes of freshwater fishers for centuries, especially when you consider its rarity.

However, world records involving this breed wouldn’t begin popping up until the 1960s and 1970s. The record for the largest tiger trout ever caught was set in the 1970s and remains woefully unbroken.

A man fished the largest tiger trout ever caught in the US from Lake Michigan in 1978. This feat happened a full year after Wisconsin had ceased its tiger trout stocking program at Lake Michigan. The massive fish weighed more than 20 pounds.

That’s about four to five times the size of an average stream-bound tiger trout. Fish enthusiasts and scientists alike mused about this particular organism’s incredible size. They theorized that the abundance of food sources found in the lake contributed to its ability to grow so large.

As mentioned above, naturally-occurring tiger trout are considered scarce. Most are bred by humans, either for sport or fishery purposes. Tiger trout begin their lives as brown trout eggs and brook trout milt. The milt fertilizes the eggs, resulting in small, bright orange gelatinous balls that slowly develop into larval fish before becoming tiny fry.

After growing a little larger, these tiny trout will enter the juvenile stage. During this stage, the fish look like nearly identical miniaturized versions of their adult selves. After this, continue to mature until they’re able to spawn. Unlike salmon, trout can spawn multiple times before dying of old age. 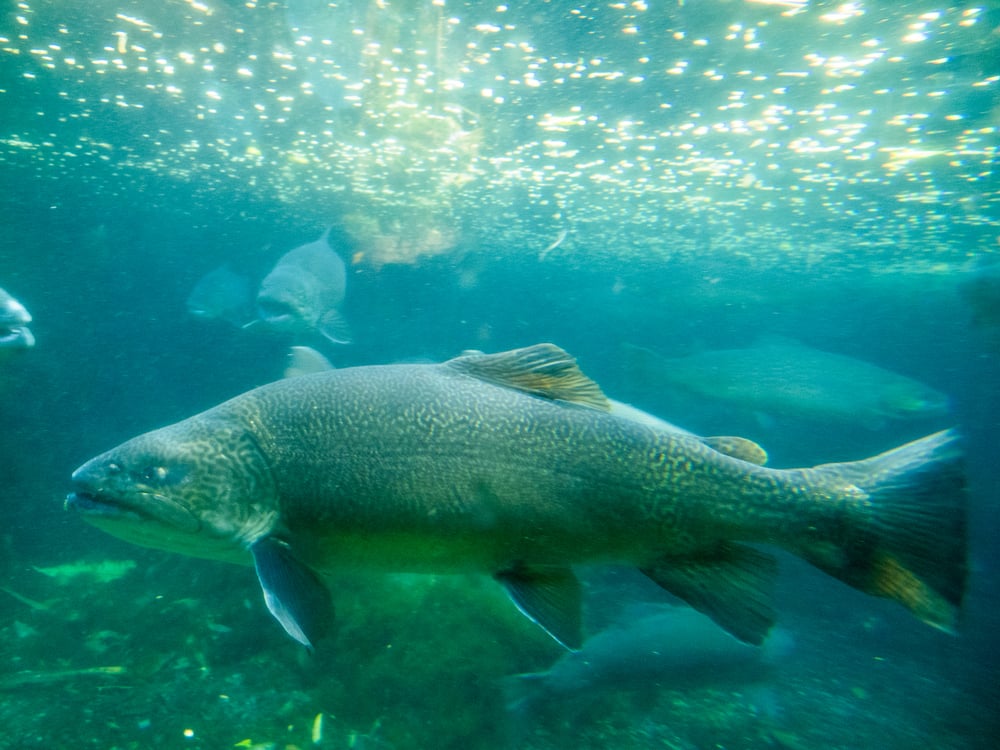 Tiger trout are often born inside of human-run fisheries or fish nurseries. When they’re large enough to survive (or just avoid being eaten by most predators) in the wild, they’re released in approved locations. Most tiger trout are found in freshwater streams, ponds, or lakes.

This hybrid breed seems to prefer colder waters, and most records concerning naturally-occurring populations come from colder regions of the US. However, they can also flourish in cool spring waters found in subtropical areas like Florida.

These striped fish have a varied diet. In addition to chowing down on aquatic insects and unlucky flies, the tiger trout also consumes many fish species that are smaller than themselves. Larval fish or slow-moving fry could make a filling meal for an adult tiger trout.

For this reason, many wildlife agencies release tiger trout into specific areas to help balance the population of those ecosystem’s fish species. This is particularly true of locations used for sport fishing. Tiger trout may lower the population of unwanted (or rough) fish, allowing more desirable species to flourish instead.

Tiger trout are primarily created, not bred. They’re utilized to combat natural threats, including invasive fish species that are smaller in size. Consequently, the tiger trout’s two most significant risks are time and people. If they don’t get caught or farmed for sport or food, they’ll likely die of old age without ever reproducing. 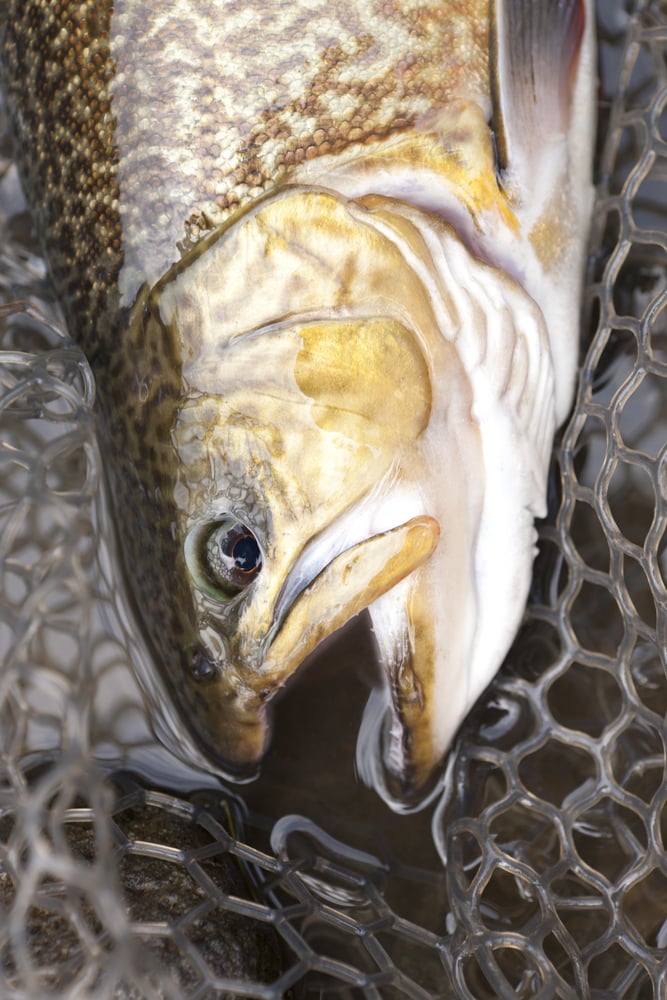 You’ll likely want to invest in some fat flies or some bait-imitating lures. These fish can become quite hefty adults, especially if they’ve been feeding on smaller fish species.

To catch a prize-winning tiger trout, you’ll want to employ bait or lures that mimic the look and movement of tasty fry. And naturally, you’ll want to make sure you’re casting your line in an area that is known for its tiger trout population. 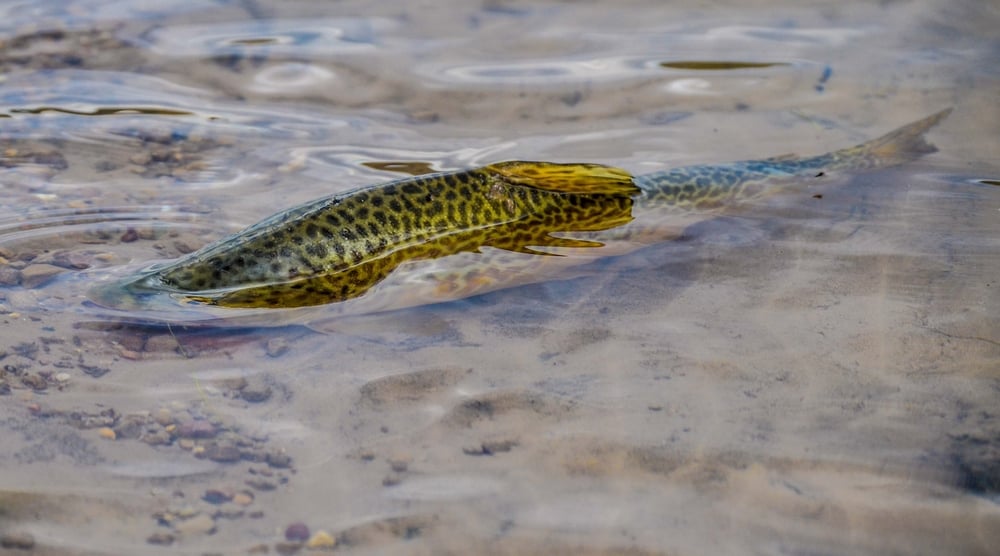 These tiger-striped fish can be found in more than a dozen US states. They’re found in Florida, California, New Hampshire, Montana, Illinois, Tennessee, and New York streams. This allows all US fishing enthusiasts the opportunity to reel in one. They’re freshwater fish often found in small streams or inland ponds.

Their highest naturally-occurring population can be found in Wyoming, though you may have better luck catching one by fishing from stock locations. Checking with your local fisheries or fishing associations may be the best way to find stock points near you.

Tiger trout can be prepared and enjoyed in many ways. Still, typical fish-focused recipes tend to work well. As such, tiger trout is often served whole or with very little preparation. Naturally, cooks will need to clean their catches, remove any entrails, and wash the fish before cooking.

However, you can enjoy tiger trout with the head and skin still attached. Keeping the skin connected may help ensure an even cook that doesn’t sap the delicate fish meat of any moisture. You can remove the skin with a fork after cooking.

If you do decide to cook your tiger trout whole over an open fire or a heated pan, you’ll want to ensure you cook it well enough to avoid ingesting any fish borne parasites. Keep an eye out for small bones as well; they’re one drawback to enjoying a fresh-cooked tiger trout.