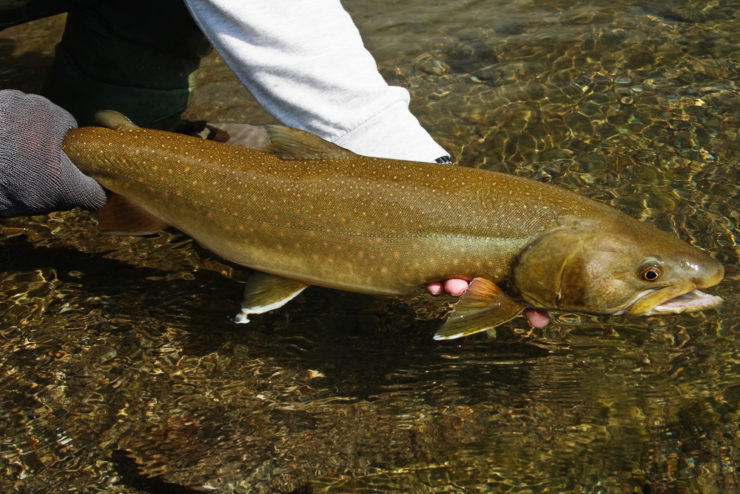 Bull trout are a threatened species of salmonids that live in the cold waters of the Puget Sound and elsewhere in the Pacific Northwest. They are one of the northernmost freshwater fish and can grow to more than 20 pounds in lake environments.

Bull trout, Salvelinus Confluentus, are part of a group called char in the salmon family. Char live farther north than any other freshwater fish except for the Alaskan Blackfish and thrive in cold water. Char are different from salmon and trout because they do not have teeth in the roof of their mouth and have a different skeletal structure.

Related Article:
The 14 Types of Trout Species for Your Bucket List

Bull trout are large fish mostly found inland, as opposed to the similar-looking Dolly Varden that are smaller and found in coastal regions. Bull trout are easy to identify because they have no black spots on their dorsal fin. They are dark, with light-colored spots, which is the opposite of most trout. Perhaps the most distinguished trait is a bull trout’s tail—their tail is only slightly forked, while other trout have deeply forked tails.

Bull trout have historically been found inland in the Pacific Northwest. They have been found out east in Montana and as far south as the Jarbridge River in Nevada. They had previously lived in California but were eradicated. These days, they are found in Montana, Idaho, Oregon, Washington, and in Alberta and British Columbia, Canada. Since they prefer to live in colder water, they are commonly found in mountainous areas where snow and ice will melt into water bodies. 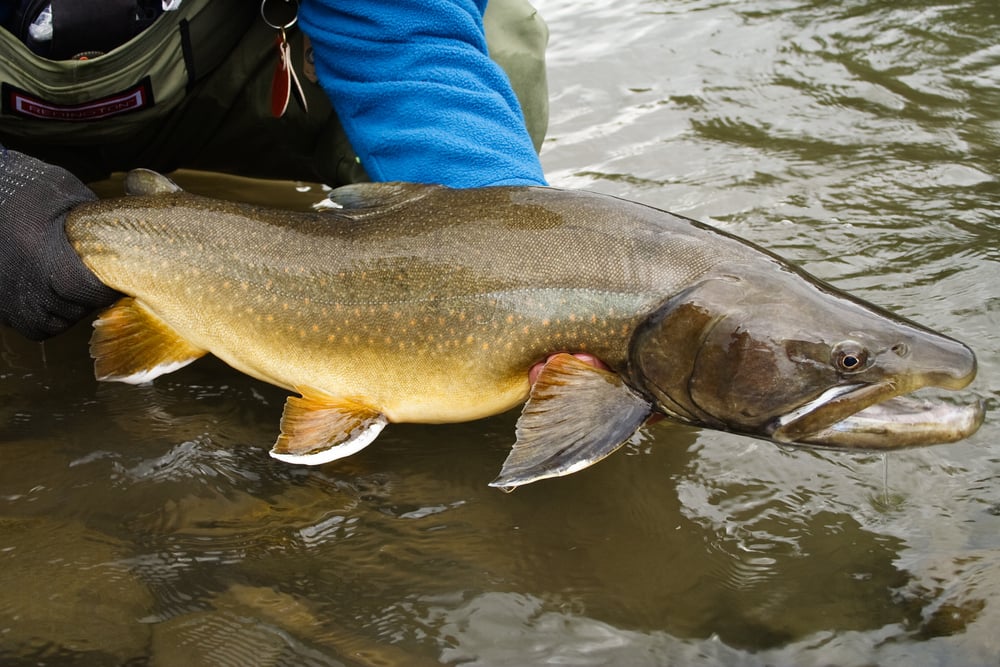 Bull trout live as long as 12 years and reach sexual maturity between four and seven. They spawn in the fall when the water is colder than usual, and even then, they search for the coolest spots with plenty of clean runoff. Bull trout need water free of pollution because their eggs will smother under silt and debris.

Their eggs have a long incubation period, hatching by late winter or early spring. Even after the fry emerge from their eggs, they may stay in the water for several weeks. Even juvenile bull trout prefer to stay near the stream bottom.

Bull trout live in frigid waters of the Pacific Northwest and Canada. Some bull trout, called small resident fish, live their entire lives in the same stream where they were born, and there are also migratory types. Larger bull trout are called migratory fish, and they might move from a small stream to a larger one or even migrate to rivers, lakes, and saltwater bodies. Migratory fish may move large distances to find the right spawn conditions, which helps keep a healthy bull trout population.

Bull trout eat insects when they are small, but as they grow up, they become piscivores. This means they start to eat other fish, including whitefish, sculpins, and smaller trout. Bull trout that live off the Washington coast also eat salmon eggs and fry.

Bull trout are a threatened species under the Endangered Species Act. Because bull trout prefer to live in such cold waters, a slight temperature change in the environment can harm them. It is also tough for bull trout to live and spawn in polluted waters. They are also subject to poaching and over-fishing.

Man-made barriers that keep bull trout from migrating also keep the fish smaller, and being restricted to one area changes their spawning habits and abilities. These barriers can also harm and kill bull trout that try to push through to migrate.

When bull trout stay smaller and in one place as resident fish, they may mate with brook trout, which produces sterile offspring. Brook trout spawn more often than bull trout, so the brook trout population will easily overtake the bull trout in this situation. 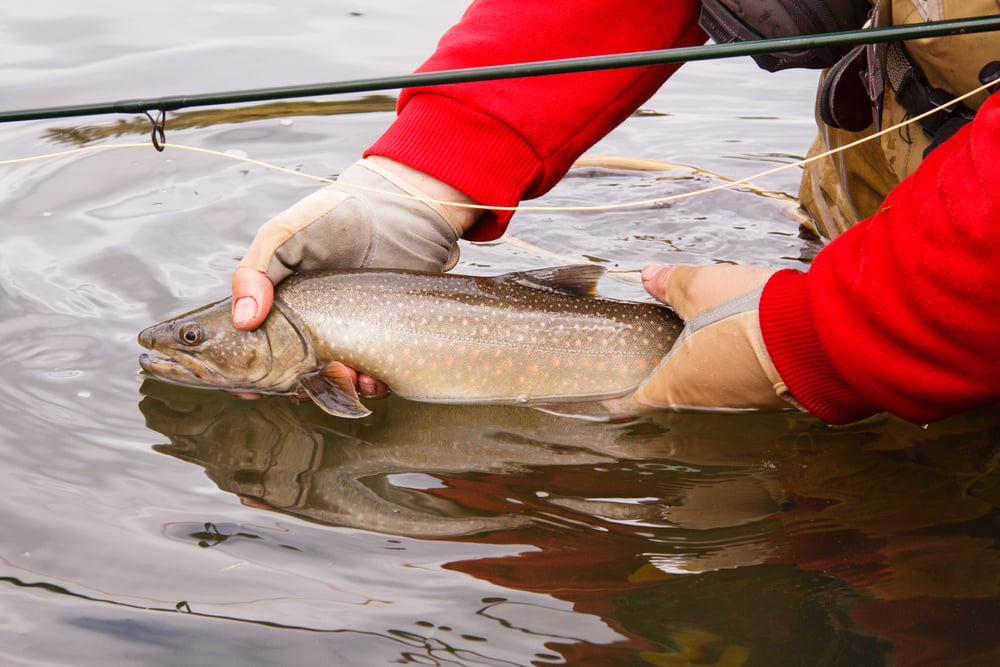 Since bull trout are a threatened species, it is crucial to know the laws before fishing. It is legal to fish for bull trout in Idaho and British Columbia, but only in certain areas of Montana. States have also made it a law that bull trout are “catch and release” fish, so if you manage to wrestle one to the surface, make sure you throw it back. Use a lure with a single barbless hook, so the trout are not severely wounded after you catch them.

Consider the size when fishing for bull trout. The migratory trout grow very large, so be prepared for a fight when you get one on the line. They also feed on fish, so make sure your bait is something they will be interested in—here are some of the best bait to catch more trout. Also consider using artificial lures that mimic a small fish’s look will make bull trout think they can easily catch a fast meal.

Cast upstream and let the current take your lure downstream to mimic the motions of a small fish. Swing the lure lazily back and forth in the water, to look like a fish swimming, and elicits a chase response from the bull trout. You can also periodically jerk the line so it looks like a wounded baitfish, aka an easy target.

Bull trout are common to the Pacific Northwest, so some specific places to fish for them include:

If you’re fishing during the warmer months, remember that bull trout prefer cooler temperatures and will most likely be down in deeper waters.

Since bull trout are currently a threatened species, they cannot be caught and kept to eat. Most states with bull trout populations enforce a “catch and release” law.