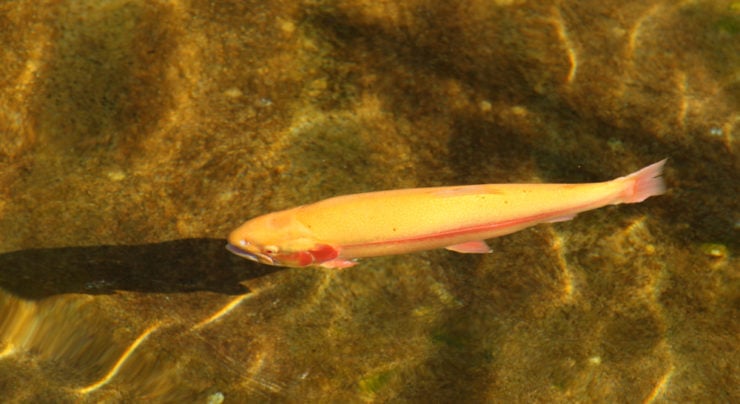 The Palomino Trout, or Oncorhynchus mykiss, is an artificially bred hybrid variant of the rainbow trout. Known for its distinctive deep yellow coloring, the Palomino Trout is bred in fish hatcheries and used as novelty stock for anglers looking for a rare and striking catch, and often end up mounted as trophies after being caught. The Palomino Trout is also known as the Golden Rainbow Trout, the Lightning Trout, or the Banana Trout. 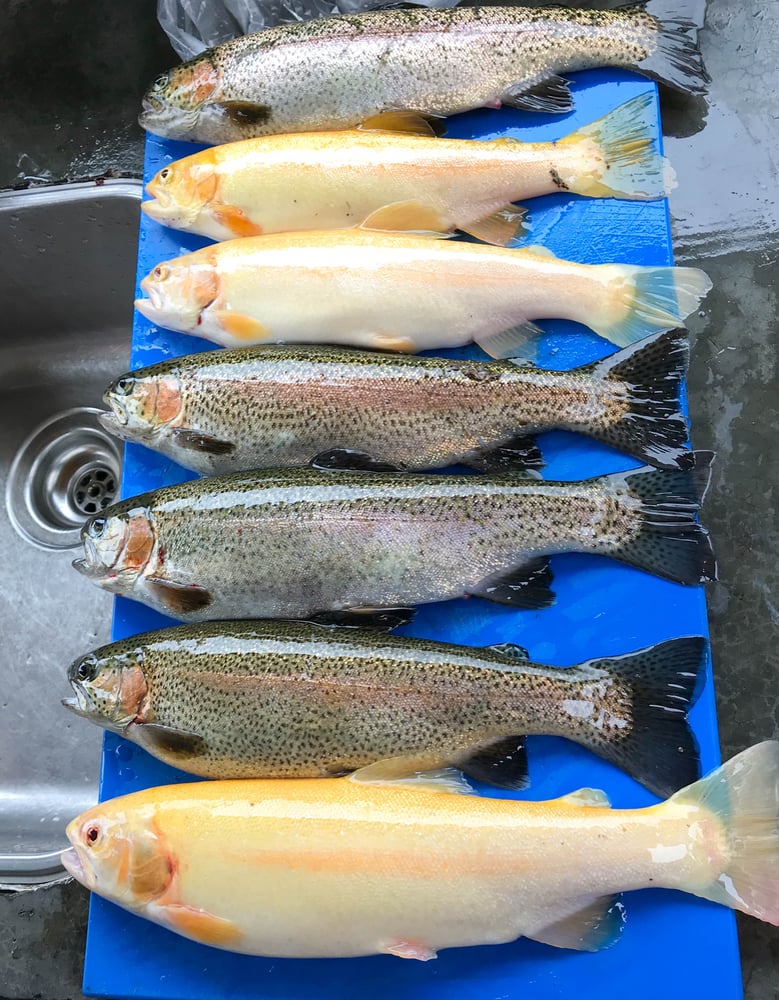 Palomino trout are easy to identify by their deep yellow-gold colored bodies. Their cheeks and lower fins are tinted pink, and they also are marked with the lateral red stripe common to all varieties of rainbow trout. They do not have any spots on their bodies or their fins.

Palomino trout are similar in size to the regular rainbow trout, although it’s not uncommon for them to grow larger. They usually are 12-30 inches long and can weigh anywhere between roughly 2 and 10 pounds.

This gold hybrid species was introduced into the West Virginia rainbow trout stock in the spring of 1963, as part of the state’s centennial celebration, and was officially known as the West Virginia Centennial Golden Trout. Other states, most notably Pennsylvania, then combined this specific hybrid with standard rainbow trout to produce the Palomino Trout.

The record for the largest palomino trout ever caught is held by Eli Borger, who caught a 13-pound, 8-ounce golden rainbow trout in Mahoning Creek, Pennsylvania, in 2008. In 2017, Mychael Althouse caught a golden rainbow trout on the Little Lehigh Creek in Allentown, PA, that weighed 13 pounds and 11 ounces, but he declined to certify his catch as an official record.

We know relatively little about the natural life of the palomino trout because it is almost exclusively bred in captivity. Unlike some hybrid species, it can reproduce in the wild, but is generally unsuccessful in doing so, likely due to its bright coloring that makes it an easy target for both anglers and natural predators.

We do know that palomino trout grow faster and larger than standard rainbow trout, as a result of “hybrid vigor”, or heterosis. 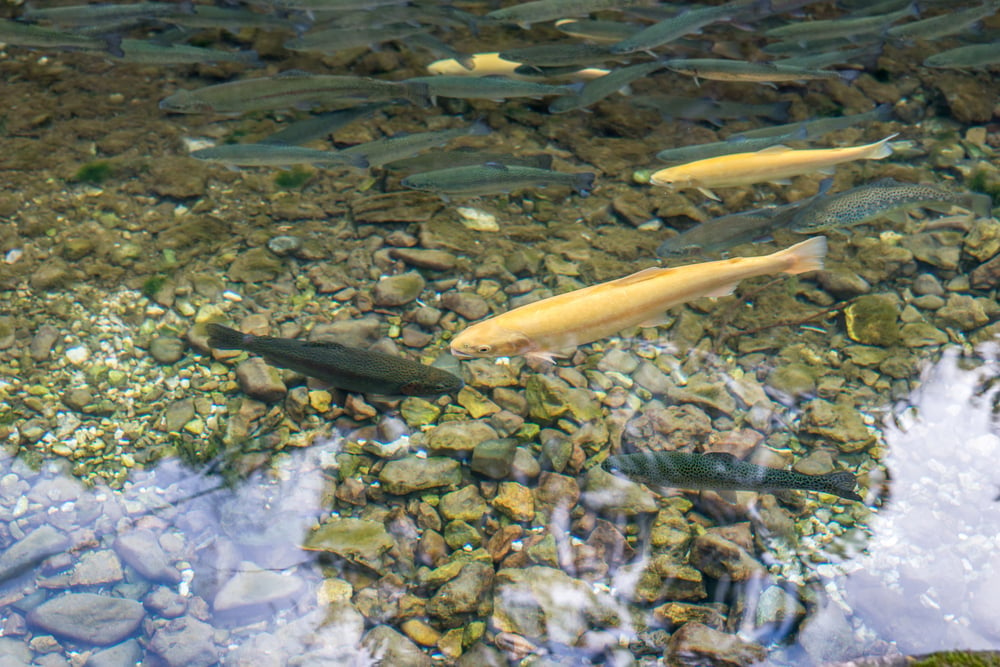 Palomino trout have the same habitat preferences as other freshwater rainbow trout. They are “fastwater” fish, meaning they prefer to live in swift areas of rivers, streams, and creeks. Perhaps due to their bright coloration, they are more likely to be found in more heavily shaded areas as well.

Palomino trout have the same basic diet as any normal rainbow trout. They are mainly carnivores, and most of their diet consists of insects and other invertebrates like worms and crawfish or other small crustaceans. Larger adult palomino trout may eat smaller fish as well.

Apart from human anglers in pursuit of a golden trophy, the palomino trout’s main predators include blue heron, osprey, otters, pike, and bass.

How To Catch Palomino Trout 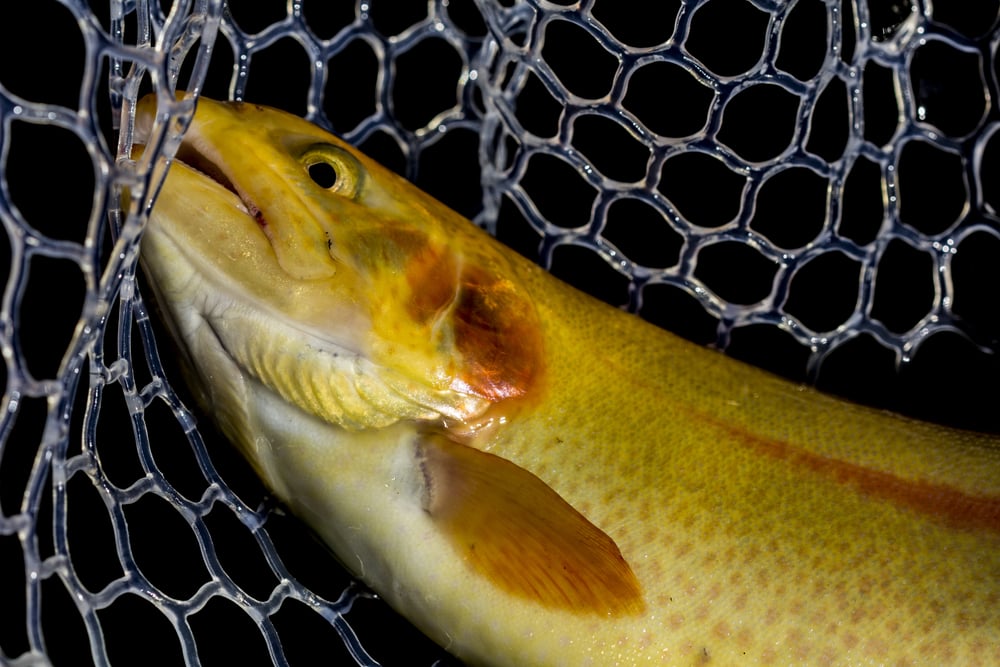 Additionally, fisheries only stock a select amount of palomino trout each season – for instance, West Virginia hatcheries supply about 80,000 golden rainbow trout eggs each year. Anglers are eager to catch the rare fish, and they are usually all caught by summer’s end.

The easy part of catching a palomino trout is spotting it in the first place. The palomino trout’s bright yellow coloring makes it easy to see in the water; however, this means that the fish are more likely to hide in shadowy areas.

They are sensitive to movement and light, so you may have more luck catching one during darker and less busy times of the day, such as the evening and early morning.

You can use any type of lure for a palomino trout, including live or artificial bait. Since it is a stronger hybrid breed of trout, it’s a good idea to use a strong lure. Anglers who have successfully caught a palomino trout recommend reeling in the fish slowly, then using a net or even your hands to finish bringing it ashore.

Catching a palomino trout will take a little trial and error and a lot of patience, but will be extremely rewarding!

As we said above, palomino trout are regularly stocked every season in West Virginia, Pennsylvania, and Maryland. The highest concentration of palomino trout is in Mahoning Creek, PA.

West Virginia is so proud of its golden rainbow trout that it dedicates an entire week, called “Gold Rush”, to stocking its waters with the fish so anglers can have their shot at catching one! This event usually takes place in early April.

The palomino trout is so highly sought after that many anglers would be affronted at the suggestion of eating one – this fish is much more likely to end up mounted on someone’s wall than on their dinner plate! However, palomino trout are a type of rainbow trout, and rainbow trout is one of the healthiest and most delicious fish you can eat.

If you decide to eat your palomino trout, make sure to remove the guts, gills, and bloodline. Cook it with the skin on for extra flavor, even if you don’t end up eating the skin – although it’s the source of tons of nutrients like Omega-3 fatty acids.