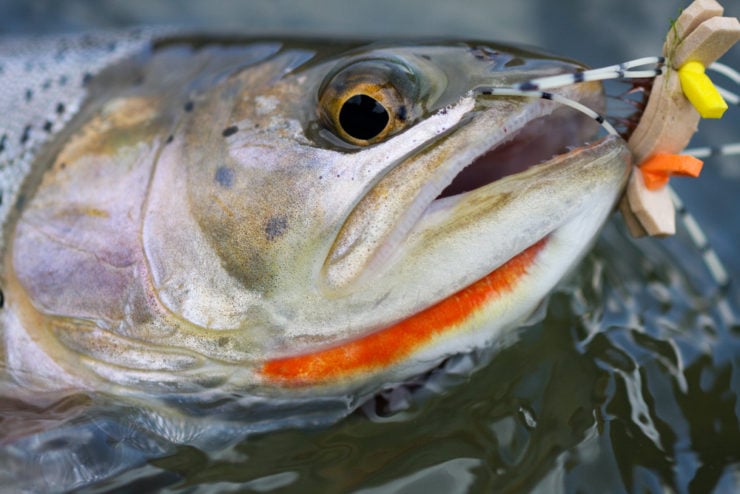 The cutthroat trout is a species of freshwater fish related to rainbow trout. This striking fish is growing in popularity as a sport fish in the southeast, but the cutthroat is native to cold, clear streams in western North America.

Although some threatened subspecies suffer from habitat loss, many anglers enjoy fly fishing for this game fish. Keep reading to learn more about this trout species and how to catch them.

The cutthroat trout inhabits the Pacific Ocean’s cold-water tributaries and resides in the Rocky Mountains and Great Basin of North America. Their specific name “clarkii” comes from the explorer William Clark of the Lewis and Clark Expedition.

This species spawns in rivers with clear, well-oxygenated, shallow water and gravel buttons. They can also reside in clear, deep lakes and sometimes inadvertently breed with rainbow trout.

While not protected under the Endangered Species Act, habitat loss and non-native fish have threatened several subspecies. These trout are often raised in hatcheries to help restore native populations and stock for angling. 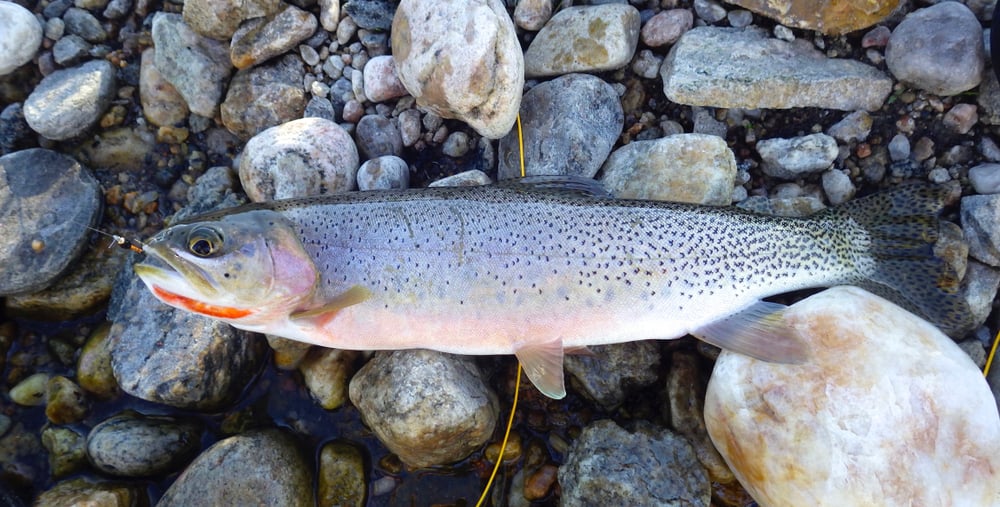 The cutthroat gets its name from prominent red slashes on its lower jaw. Their overall coloration and size can vary greatly depending on their habitat. Colors range from gray to golden or green to black.

However, the “cutthroat” markings that this species is famous for is not unique. You can distinguish this species from rainbow trout by their basibranchial teeth present at the base of their tongue. A maxillary extending past the posterior edge of their eye also sets them apart.

Mature fish can reach a size of 6 to 40 inches as adults depending on food availability. Coastal cutthroat can average around 2 to 5 pounds in weight. Fish who reside permanently in streams are often smaller.

Typically, cutthroat trout also have a lightly spotted pattern on their back and sides. Their dorsal, tail and adipose fins often have spots as well. 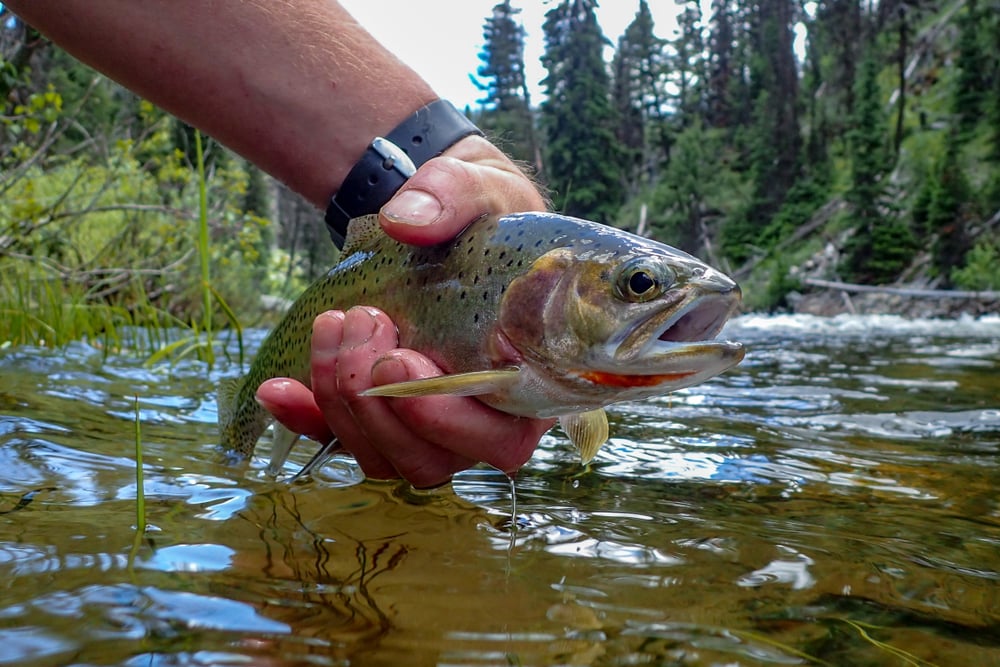 This species of trout was the first New World trout that Europeans encountered in 1514. Coronado, the Spanish explorer, recorded seeing trout near Sante Fe, New Mexico.

The explorers Lewis and Clark described the cutthroat throat in their journals during their famous expedition. They obtained specimens of this fish from the Missouri River near Great Falls, Montana.

Charles Hallock coined their common name in an article published in The American Angler in 1884. He described the species based on their red markings on their jaw, giving the appearance of a severed throat.

Today, the cutthroat trout is a popular game fish for fly fishing enthusiasts. However, habitat loss and the introduction of non-native species currently threaten some subspecies.

This freshwater fish is also currently stocked as a sport fish in the southeast. Hatcheries raise cutthroat trout for angling and reintroduction into their native habitats. 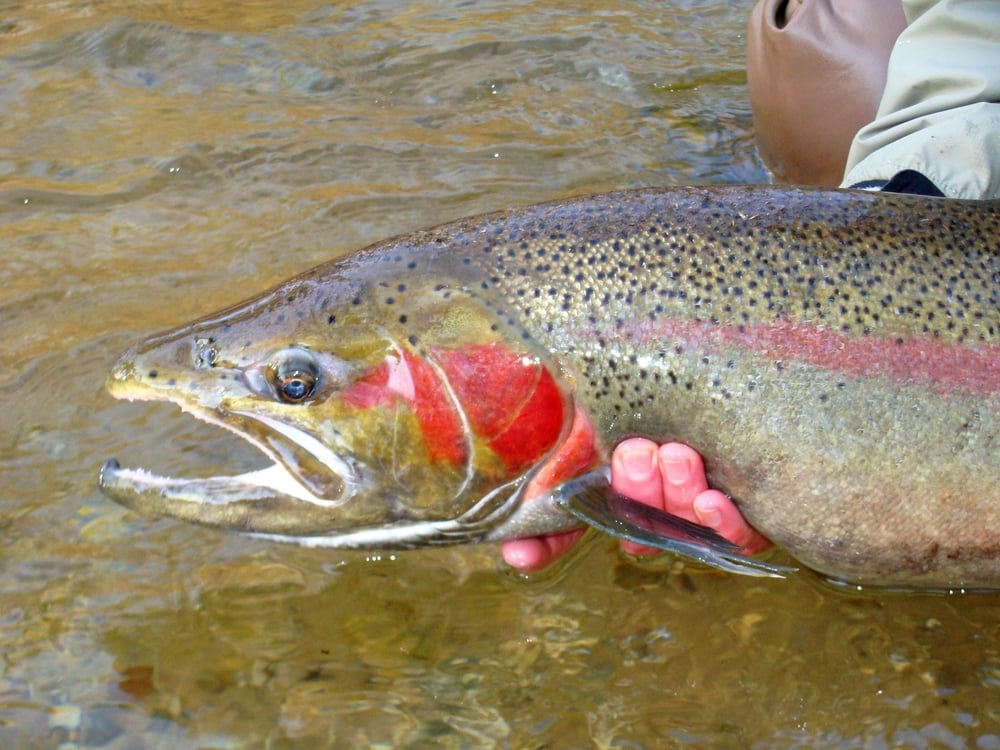 The world record for the largest cutthroat trout ever caught belongs to a member of the Lahontan subspecies. These large fish can average 8 to 22 inches in length in large rivers. The world record holder is a fish that weighed 41 pounds and measured 39 inches long.

Cutthroat trout spawn during the springtime when the water reaches temperatures between 43 and 46 degrees Fahrenheit. Subspecies in coastal rivers can spawn as early as February, while fish in high mountain areas may not breed until late July.

Spawning fish will travel to relatively large, shallow, clear, and well-oxygenated rivers with gravel bottoms. Before they lay eggs, the trout construct a redd. A redd is a nest that the female trout digs in the gravel with her tail. The nest helps hide the eggs after the parents leave.

Females can lay between 200 and 4,400 eggs, which are then fertilized by a male. Fertilized eggs will hatch into sac fry about a month later. These alevins spend another two weeks hidden in the gravel, absorbing their yolk. Once they emerge, they start to feed on zooplankton.

These lake populations will travel to shallow streams with gravel bottoms to spawn, while other trout reside in clear, cold streams for the majority of their lives.

Coastal cutthroat trouts will spend part of the year in saltwater estuaries and the ocean. However, they will not migrate far from their native river and return to freshwater to spawn. 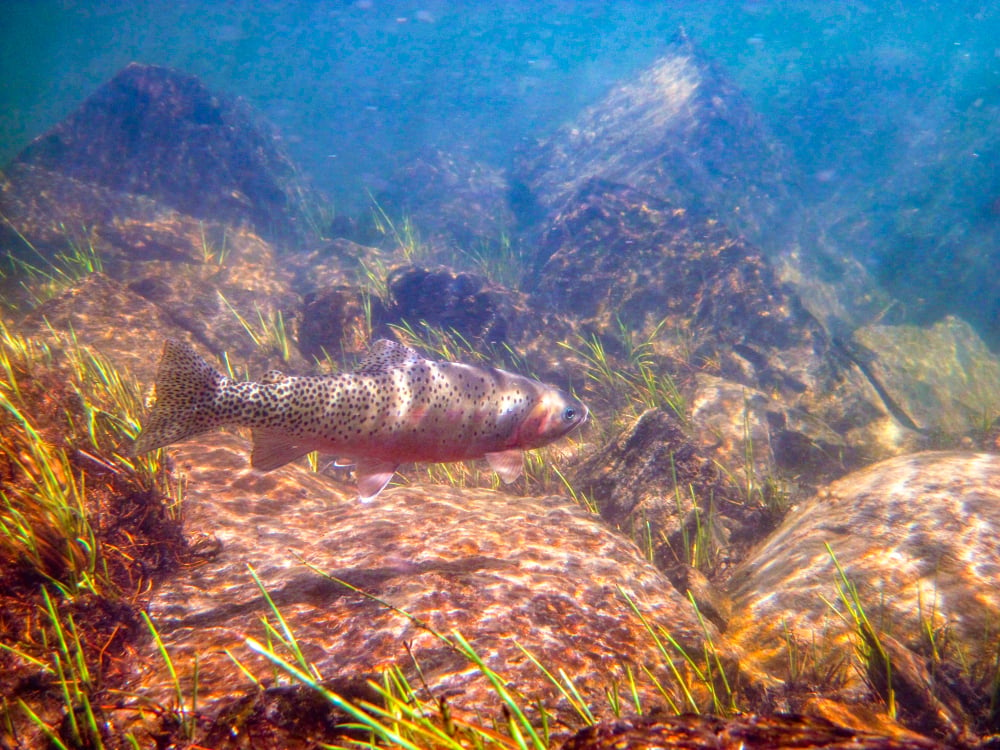 All cutthroat trout need habitats with cold, clear, well-oxygenated water. They also require gravel bottoms to spawn so they can hide their eggs.

Stream-side vegetation helps reduce water pollution in ideal cutthroat habitats. Beaver ponds also often serve as a refuge for this species during droughts or over the winter.

Most types of cutthroat are nonmigratory. These fish reside in streams for their entire lives. However, coastal cutthroat trout will spend part of the year in the ocean or saltwater estuaries.

Trout are often considered an indicator species. They are sensitive to changes in their environment and require specific conditions to thrive. If water is too warm or deoxygenated, they may not survive in that habitat.

These opportunistic feeders eat a diverse diet. Stream-resident cutthroat trout rely on aquatic insects and larvae as their primary food source. They also eat terrestrial insects that may fall into the water or flies attached to a fisherman’s hook.

Fish eggs, crayfish, shrimp, and even small fish are also on the menu. The larger cutthroat trout grow, the more fish they consume.

Coastal subspecies will feed on saltwater fish and crustaceans in the ocean. But, they eat the same diet as freshwater varieties when they return to their home rivers. 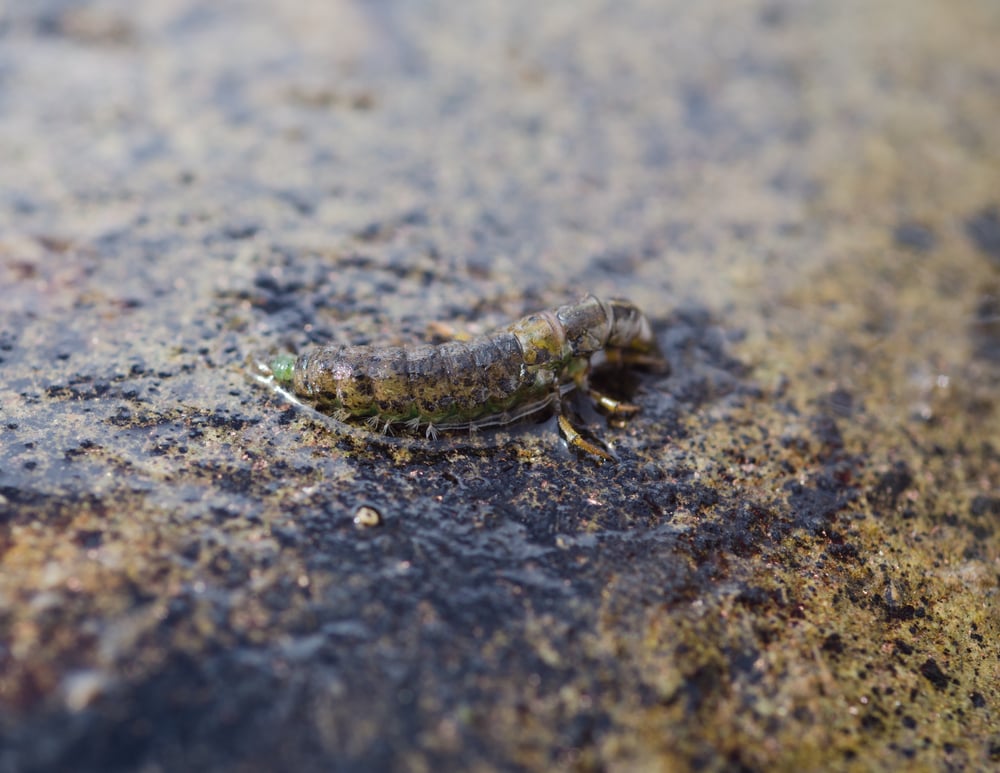 Overfishing and habitat loss has significantly reduced the historical range of this trout species. Population densities have also declined where the cutthroat trout compete with non-native fish.

Whirling disease has also broken out in spawning tributaries and caused population declines.

Local predators like otters and birds of prey hunt these trout for food as well. 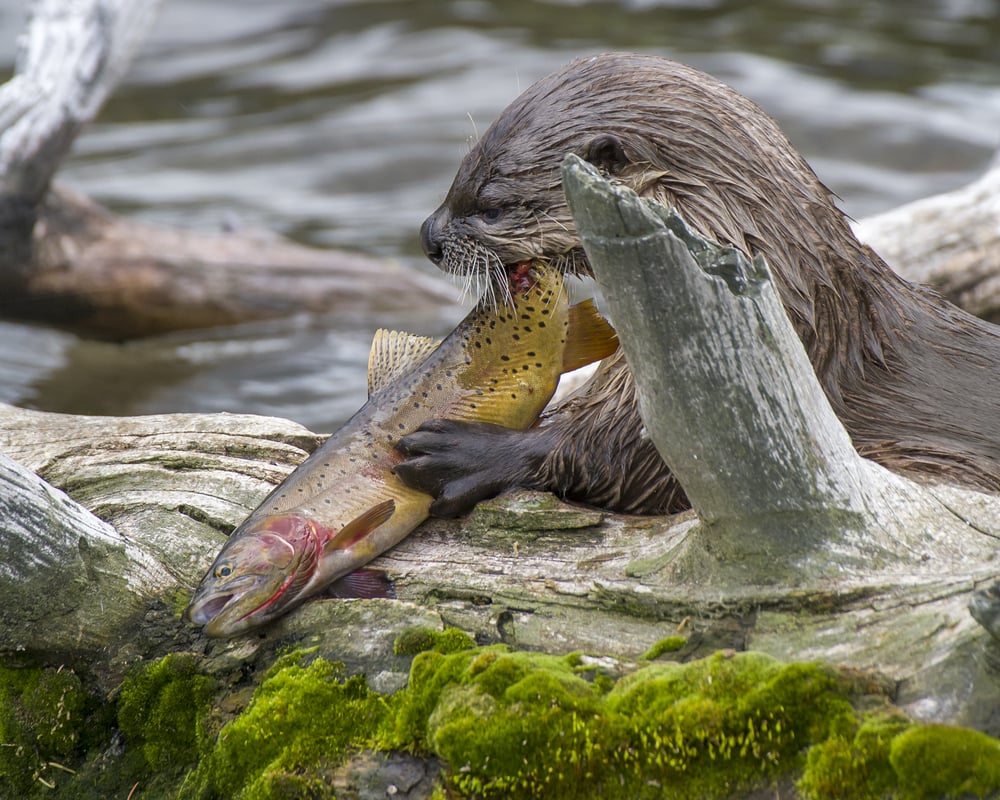 The cutthroat trout is one of the best species for fly fishing. Unlike other species, they are active at nearly any time of day, and sunlight does not play a significant role in their feeding habits.

They are often extremely active and likely to strike subsurface flies when inclement weather is oncoming. However, some trout in overfished areas like Yellowstone can be finicky.

When fishing for cutthroat trout, choose a target area with good holding cover, as cutthroats are ambush predators.  Most anglers use dry fly patterns that mimic mayflies, caddisflies, or stoneflies. Cutthroats have a diverse diet and will eat nearly anything anglers cast.

Attractor patterns are often useful when there is no hatch blooming that night, but streamer patterns are also helpful with cutthroats.

When fishing for cutthroat trout, you want to match the hatch as much as possible.  Artificial lures work well in addition to local fly patterns.

In early spring, nymph flies are beneficial as native aquatic insects will just begin to become active. Dark-colored insects arrive during the spring, so choose a dark brown or black nymph. You can use a lighter color during the summer with a dry fly pattern.

Heavy rain and high water levels can reduce visibility, so wait for the water to recede and the fish to become active again after flooding. 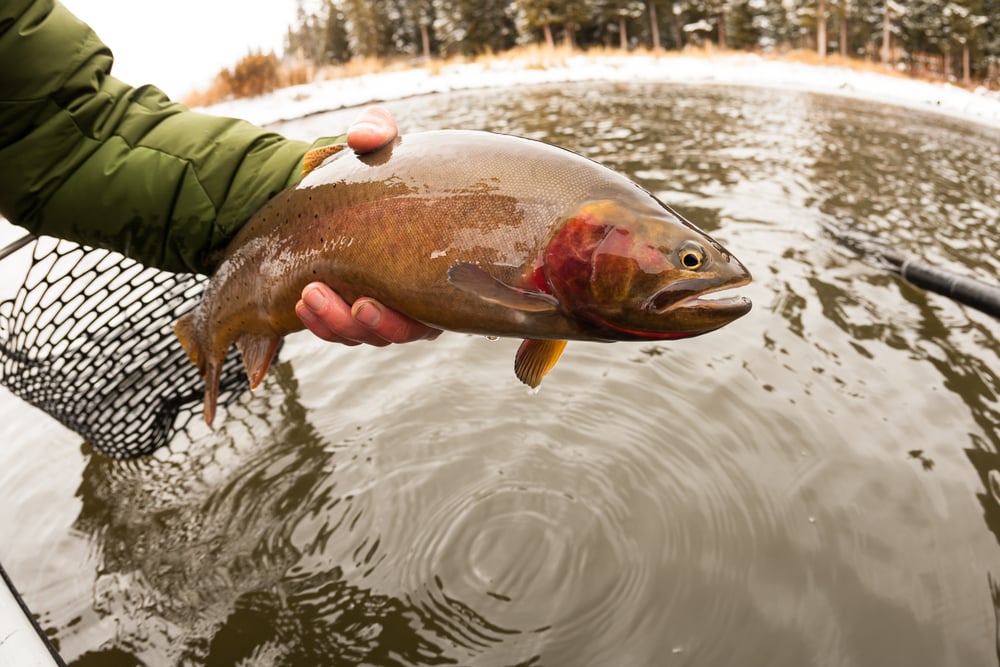 Anglers can find areas throughout the Western US where they can catch cutthroat trout in their native habitats. Yellowstone fishery in Yellowstone National Park is an iconic destination for fly fishing for this species. Fishing in this park can help support species preservation.

If you aspire to catch a large prize, Pyramid Lake in Nevada is the place to go. This lake is the source of the world-record-holding cutthroat catch and home of the largest subspecies of cutthroat trout, the Lahontan.

Fly anglers searching for sea-run coastal subspecies can fish along the pacific coast from Alaska to Northern California. Puget Sound in Washington has many tributaries with cutthroat trout. 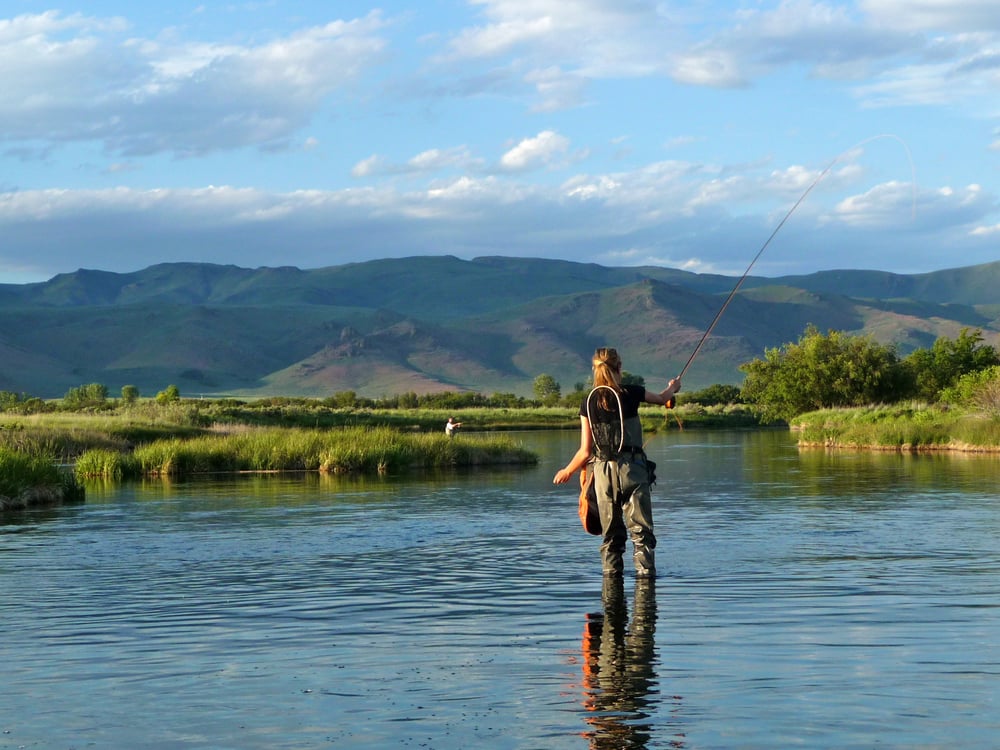 Like other varieties of trout, cutthroat trout have a more pungent taste. Some people enjoy eating this fish and claim they are one of their favorites. However, others can be turned off by the taste and prefer to eat milder flavor.

For people who do enjoy cutthroat trout, you can serve them in a variety of ways. Filleting the cutthroat and frying them is a popular way to enjoy this fish. Other people will remove as many bones as possible and cook the fish whole.

The size of your fish will determine if you should fry, smoke, or bake them. However you enjoy cutthroat trout, be sure to fish responsibly and help protect the pristine western waters this fish calls home.