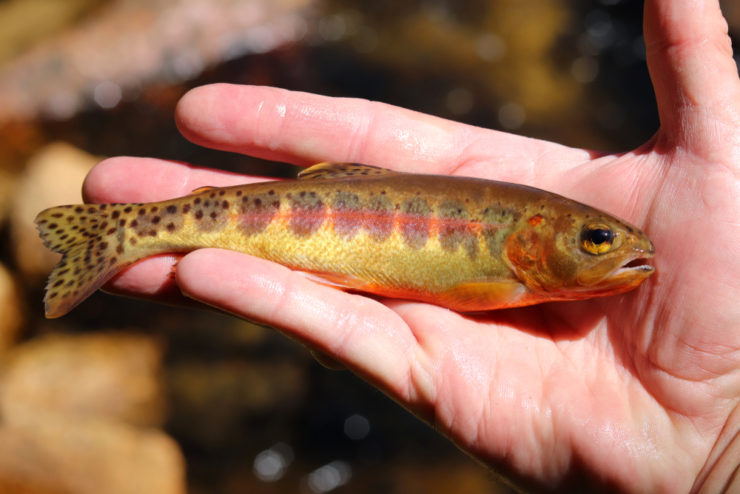 The California Golden trout is the state fish of California, and it is one of the most colorful trout in the world. It’s sometimes referred to as the “fish from heaven,” and many consider it the most beautiful of the salmonids.

Its stunning beauty and popularity have led to this trout species being stocked far outside its native ranges in the Sierra Nevada. The California Golden trout has been transplanted to waters in Wyoming, Utah, and Montana. It has even been taken as far away as the Rocky Mountains in Alberta, Canada. 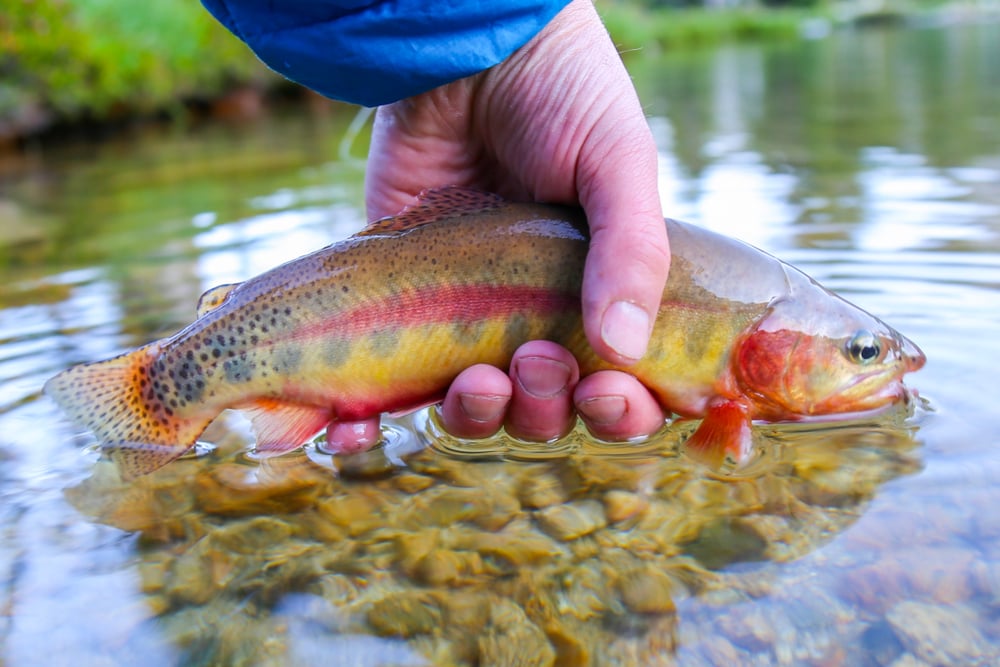 This species’ bright coloration makes it easy to recognize.

Their backs can be anywhere from a bronze or copper color to a deep olive, which fades into a bright gold on the fish’s flanks. The belly is typically bright orange, though the coloring can vary depending on several factors, such as the fish’s age and maturity.

You can usually see ten parr marks on the lateral line in adulthood, though the California Golden trout doesn’t usually have spots below this line. They also have large, round spots on their dorsal and caudal fins. The paired fins are typically orange, but some can have white or yellow tips with a black band.

When fully grown, the California Golden trout can reach up to about eight inches in length. 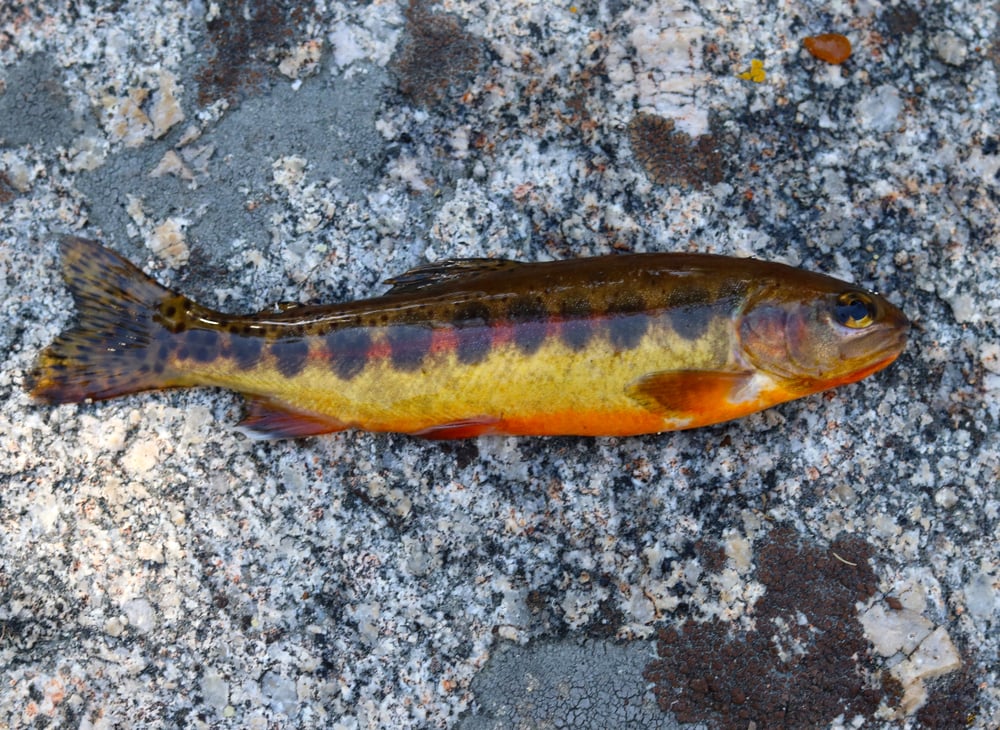 The earliest records of this trout date back to 1892, when the president of Stanford University, David Starr, described it for the first time. At this time, the species was known as Salmo mykiss agua-bonita, named after the Agua Bonita waterfall, where it was first collected. It later received the name Oncorhynchus mykiss aguabonita.

As early as 1904, Stewart Edward White recognized the risk of overfishing leading to extinction. He wrote to President Theodore Roosevelt to warn him about this threat. Because the president shared his concern, Barton Warren Evermann from the U.S. Bureau of Fisheries was sent to California to study the situation.

Evermann then spent a significant amount of time learning about the species and describing the different types of native fish.

The heaviest California Golden trout ever recorded was caught in Cook Lake, Wyoming, and weighed 11.25 pounds. The longest one ever caught also came from Wyoming and measured 21 inches.

California Golden trout can live to an age of up to nine years in streams, though the average lifespan is somewhere around six to seven years.

They reach sexual maturity at three to four years old, and they reproduce in late spring or early summer. This time of year is when temperatures are a bit warmer and range from 10 to 15 degrees Celsius. The fish wait until the afternoon to reproduce when the water is at its warmest.

At this point, female trout dig shallow redds and lay anywhere from 300 to 2300 eggs. It takes around twenty days for the eggs to hatch (at a temperature of about 14 degrees Celsius), where they remain for a couple more weeks until they emerge.

California Golden trout eat invertebrates that are both terrestrial and aquatic, though its primary source of nutrients is surface water-dwelling insects, either larvae or fully developed. They prefer midges in lakes, as well as caddisflies, but they may also eat small fresh-water shrimp. To feed, the trout opens its mouth and swallows its prey whole.

Its feeding season lasts mainly from May to September, when its food source is most abundant.

There are several threats to the California Golden trout, and it is likely to become extinct within the next fifty years without extensive conservation efforts.

This danger comes from predation and competition. Brown trout have been introduced to the South Fork Kern River and prey on them, while introduced Brook trout compete with the Golden trout for food. Hybridization with the Coastal Rainbow trout has also put the California Golden trout at risk, as hybridization threatens their genetic integrity.

Grazing poses another threat. Grazing has occurred in the native range since the 1800s, but when left unchecked, it affects canopy shading, stream depth, and stream widths to the detriment of the California Golden trout. Despite efforts to regulate grazing, sheep and cattle are raised in the Golden trout’s native range and continue to put the survival of this species in question.

Finally, recreation, or human use of streams, lakes, and watersheds, is another issue. Activities like boating, angling, swimming, and off-roading can negatively impact populations. It may take time to see the consequences of these behaviors, but they have a cumulative effect.

There are several things to know to help you catch this trout. Unlike most other trout species, the California Golden trout is more active during the daytime due to a lack of predators in its native range. But although they receive low fishing pressure, they can be somewhat challenging to catch, as they’re picky eaters.

When it comes to lures, anglers have to adjust to the type of food that inhabits the high-elevation waters where the Golden trout lives. Small lures with this trout’s favorite foods, caddisflies or midges, is generally the best way to go. You may also want to try spoons, spinners, worms, and salmon eggs. You can have luck with small crustaceans, too.

Anglers employ a variety of angling methods to lure California Golden trout. Any of the following may be useful:

A range of lures, tackle, and bait can also work to attract this trout:

Sometimes the most challenging part of angling this trout is not figuring out which types of lures and bait to use but instead determining which rivers have a strong California Golden trout population. They’re not present in all alpine lakes and rivers, so often finding waters where they are is half the battle for anglers.

You can find California Golden trout in the Golden Trout Creek or South Fork Kern River. The Kern Plateau waters are open for angling, though keep in mind that most areas require you to hike to reach them. Accessing these high-altitude areas can be challenging, but they provide for some spectacular scenery. And even if you don’t catch any Golden trout, a day spent reaching these remote places is never a day wasted.

Once you do get to the California Golden trout’s habitats, you can find them in many different places. They congregate in areas such as dams and falls, eddies, holes, and merging currents. You may also have luck angling in standing waves, current edges, and drop-offs. But one thing to be aware of is that it can be difficult to catch them in smaller tributaries due to the riparian or meadow vegetation typically found there.

What does help when angling for California Golden trout is their coloring. Because they have such distinct and vibrant colors, it’s easy to spot them in the shallow waters they inhabit. It’s also pretty hard to mistake them for another type of fish.

If you do have the good fortune of landing a California Golden trout, it is recommended that you release them. Catch and release is an essential component of conservation, as this species is not very common. This practice is necessary if we want to see the numbers of these fish increase.

If you do want to take other trout home to eat, keep in mind that the trout limits in California are five per day, and you should never have more than ten in your possession.

Trout can be enjoyed in many ways, and oftentimes the simpler the recipe, the more the flavors of this fish come through. You can’t go wrong with lightly frying fresh trout in butter in a skillet, or finding a simple recipe to bake it in the oven. Some people prefer grilling it, and trout is often served with the skin, which adds flavor. You can even eat the skin if you like.