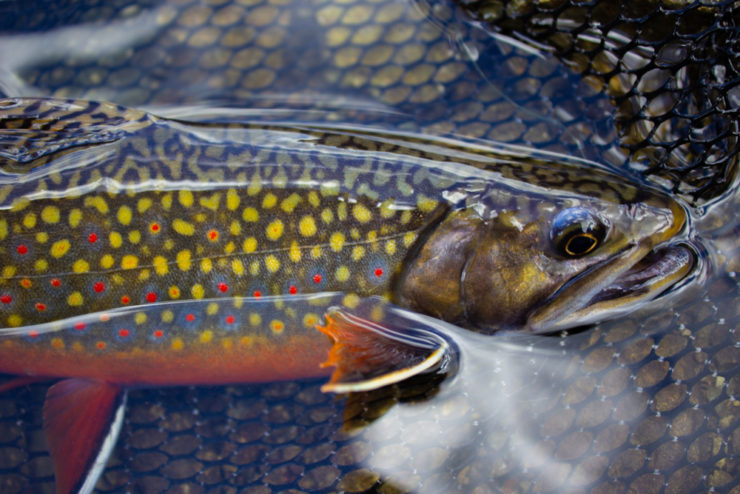 Before fishing, it’s important to know about and understand the species of fish you’ll be targeting. This is a comprehensive look at brook trout, ranging from information about their biology to their environment to even the best way to cook them.

Brook trout come from the char family, which is a subgroup of the salmon family. Unlike other salmon and trout, char do not possess teeth in the roof of their mouths. They may also be referred to as brook char, native trout, natives, spotted trout, squaretail, speckled trout, or brookie.

These fish are an indicator species, as they show the health of bodies of water. For example, a large group of brook char indicates healthy water, whereas a small group indicates unsanitary water or a deteriorating habitat. Unlike rainbow and non-native brown trout, this species of trout requires a cooler water temperature habitat. 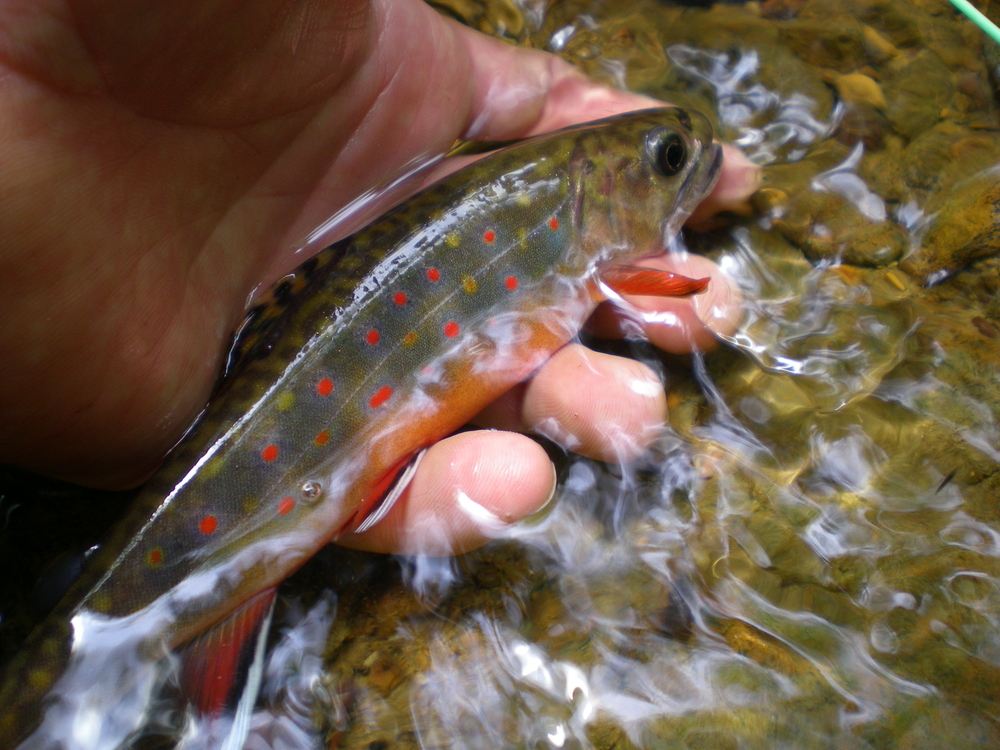 True trout have a light base with dark spots. Conversely, char have a dark base with light spots, so they are easily distinguishable. Native trout are greenish-brown with a light yellow marbled pattern on their sides and back. Their lower fins and belly are pink. They’re a beautiful sight in the water and on a lure.

Breeding male spotted trout are medium to dark green with pale yellow spots. Their dorsal fins are yellow-green with black streaks, and their lower fins are orange-red with a black streak on the rim. They have small red-blue spots along their sides, and their coloring on their lower sides shifts from yellow-green to orange to orange-red with black. Their undersides are white.

The brighter colors of male native trout can change during the spawning season to attract females. As is typical with many species, nonbreeding adults are similar in pattern, though their colors are not as bright. 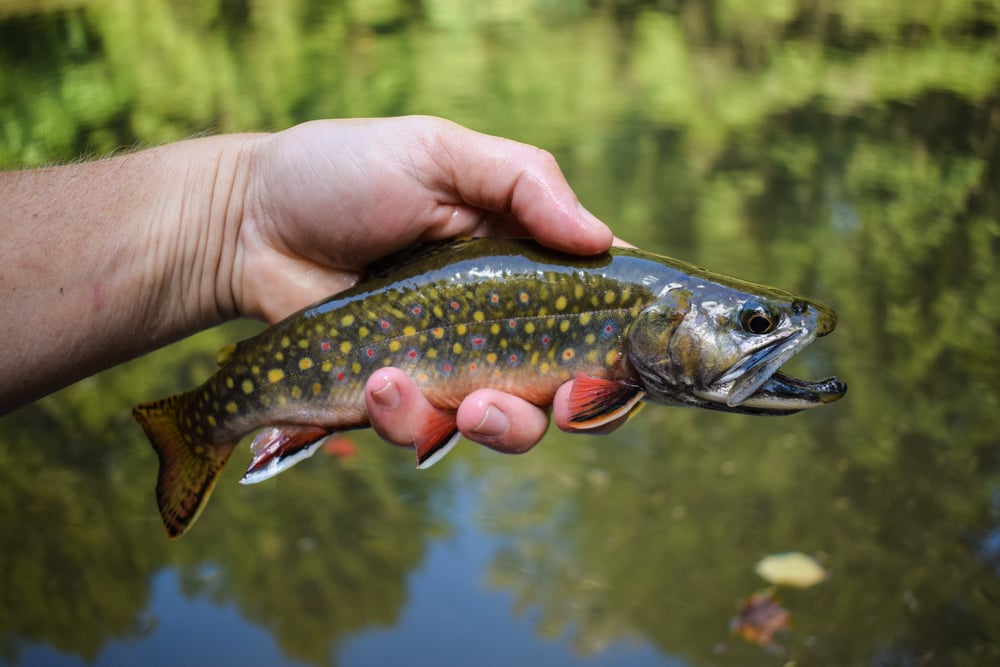 Today, due to the conservation status of the squaretail, many fishermen engage in catch-and-release of these trout in order to preserve their populations. The native environment of the spotted trout has drastically decreased, leading to many different organizations partnering together to help maintain and bolster the native brook char populations and habitat.

Interestingly enough, however, many brook char are raised commercially for food production or sold to organizations that stock their own ponds and lakes with them. While it’s not incredibly common for native trout to be produced commercially, it’s still something that happens for specific situations. 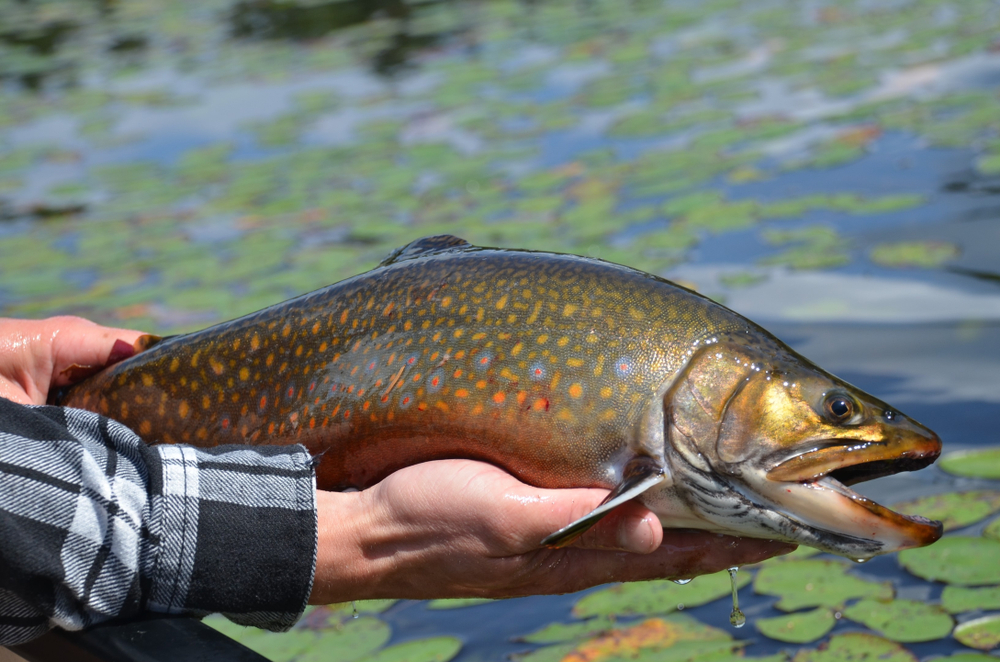 The world record held for brook char can vary based on different states and locations, but the maximum recorded length is 86 cm (33.9 in). The maximum recorded weight of a spotted trout is 8kg (17 lbs 10 oz.), and the oldest one on record is 24 years of age.

The world record brook char was caught in July of 1915 in Ontario. It weighed 14.5 pounds and was 31 inches long. This record has still yet to be beaten. However, the state record for a spotted trout caught in Virginia was in Shenandoah County on October 22, 1987. It weighed 5 lbs 10 oz.

The average lifespan of a brook char is around five years, but there are reports of one reaching more then fifteen years old. On average, brook trout mature in two years and may spawn after one, usually between September and October.

On average, a squaretail from mountain stream habitats will live about three years. Larger native trout from larger stream habitats may live anywhere from four to six years. However, in park streams, maturation is about two years.

Spotted trout spawn in the fall, around early October to mid-November in national park streams. Shorter days and cooler water temperatures trigger spawning. Redds, or shallow depressions, are made by female brook char typically on a gravel surface. After spawning, male and female squaretail will defend the redds.

Hatching begins mid to late January in park streams, and by mid-March, juvenile fish will leave the redds. Juvenile native trout from park streams usually grow to be about three to four inches long by the end of their first summer.

Brook trout can be found in lakes, small or medium rivers, or cool, clear creeks, but also in Rocky Mountain streams that have cold water spring sources. They can be found in beaver ponds as well, given their hearty nature.

Habitat conditions, such as food source and water temperature, influence brook char size. Squaretail found in lakes grow larger than average, and sea trout are even bigger. However, most native trout are small, given their slow growth rate and short lifespan. 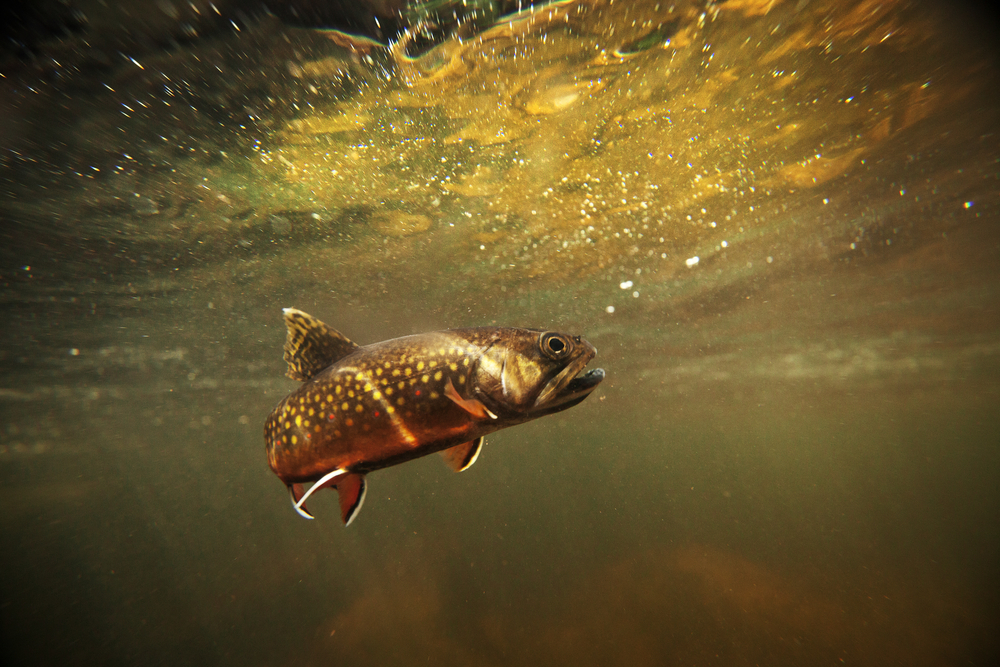 As for bait, to entice native trout, you should use things like crickets, nightcrawlers, mayflies, crayfish, or salmon eggs. You’ll have to be careful to mimic the real-life actions of some of these, like the crayfish, but it can make a real difference in how many fish you catch. 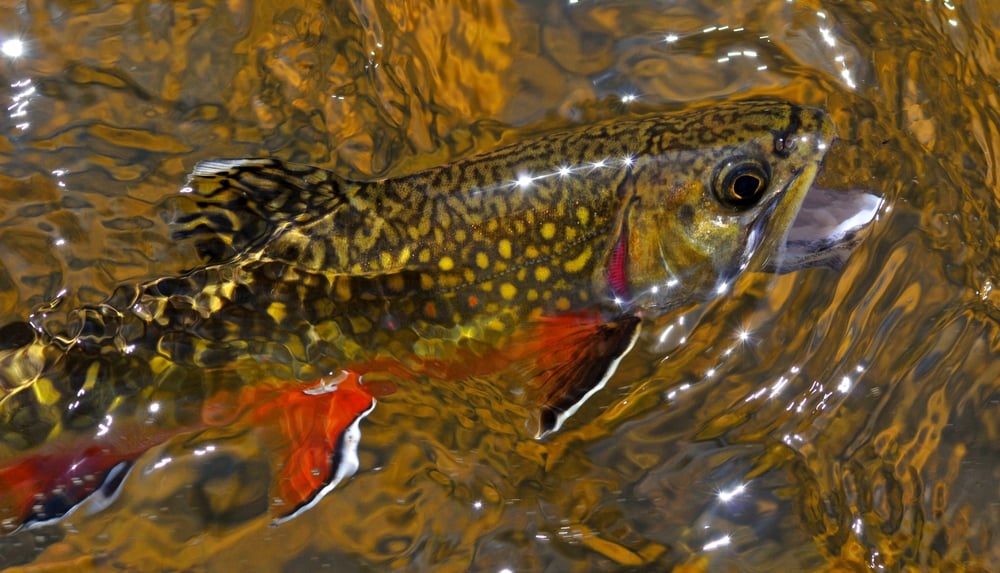 The natural predators of brook trout are otters, snapping turtles, fish-eating birds, and large brown trout, along with kingfishers, heron, and northern water snakes. The increase in land use has reduced cold water habitats for native trout. The squaretail also has to compete with non-native salmon and trout for nursery and spawning habitats.

Flood and drought have caused a dynamic change in native trout populations of park streams. Over time, disease outbreaks, non-native predatory fish, changes in water chemistry because of acidification, and over-harvesting could also result in the loss of this trout population. 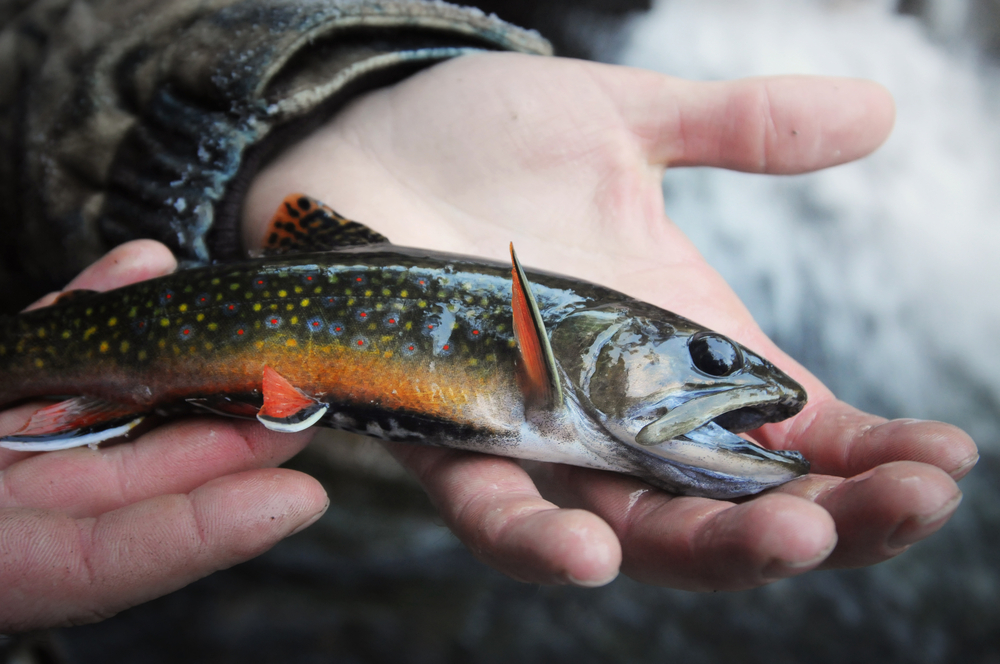 The best time of day to catch brook trout is early dawn or dusk. You can wade in the water or fish from shore, but you should cast upstream and across from your target. We recommend that you use live insects or artificial flies as bait, as early season trout love aquatic insects.

When it comes to fishing for brook char, there are a few lures that may work better than others. We recommend using the Rooster Tail, Panther Martin, Mepps Aglia, or Rapala original floating lure. When casting your rod, make sure these spinners go in with as little a splash as possible in order to prevent spooking the fish and scaring them away.

Spotted trout will retreat to more shaded areas or deeper water during the day. These trout are cautious and easily scared but are also aggressive predators. Like we suggested before, using the recommended lures and bait can help make sure you catch the most brook chars possible. 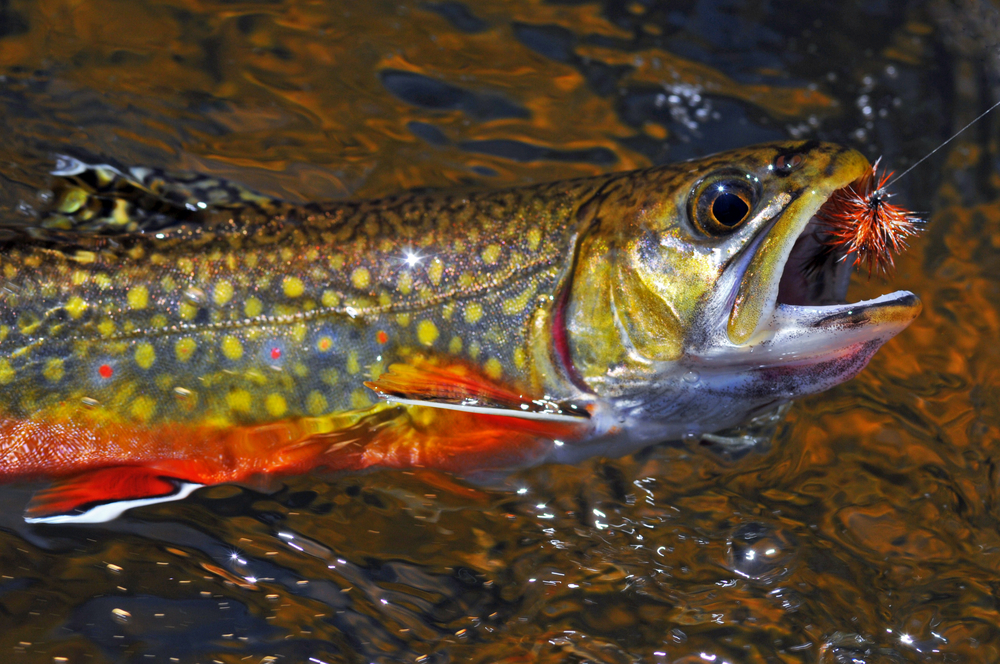 Brook trout are native from northeastern Canada and the Hudson Bay basin, to the Great Lakes basin, to part of the Mississippi drainage, to the Atlantic coast of Maine to New Jersey, and along the Appalachian chain to northern Georgia. With the exception of Antarctica and Australia, the brook char has become widely established throughout North America and other parts of the world. 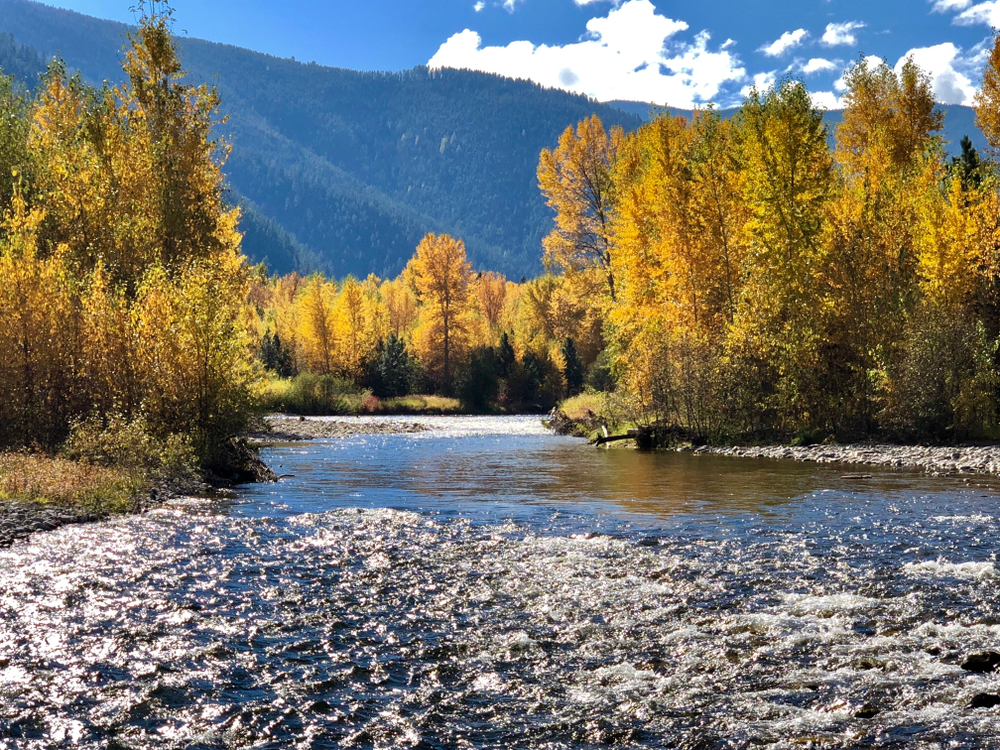 Though spotted trout have unique conservation status, it doesn’t mean you can’t eat them. You’ll have to be careful about where you’re fishing, but if it’s not a catch-and-release area, there’s a good chance you’ll be able to take your catch home and cook a delicious meal.

When cooking brook trout, you want its natural flavors to shine through. To accomplish this, you need to season it with as little additives as possible. We recommend a spice mixture of salt, pepper, dill, and lemon juice to enhance its flavors without overwhelming them.

As for cooking methods, grilling or pan-searing your spotted trout is the best way to prepare it. Squaretail cooks quickly, so be careful to keep an eye on it if it’s your first time. Cook each side no more than 10 minutes to make sure your fish isn’t overdone. Serve with some rice and vegetables, and you’ve got one fresh-caught, home-cooked meal! Just don’t forget to pair it with a nice wine or beer.